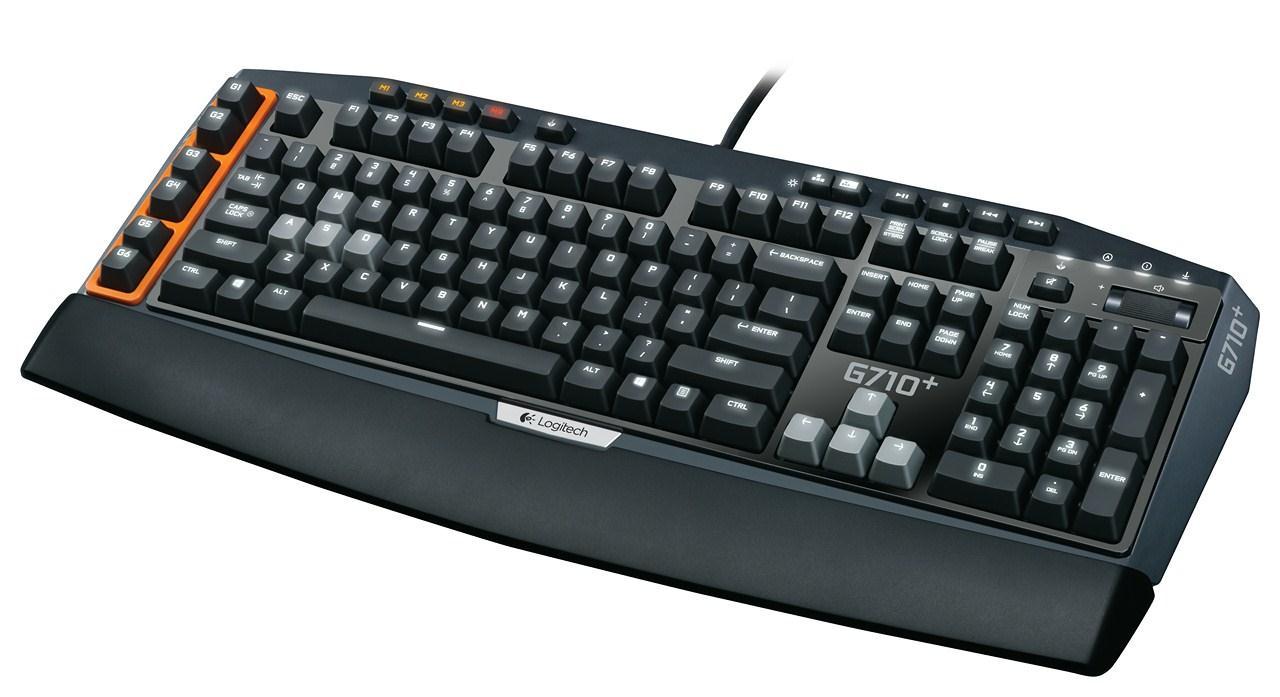 Written by Travis Huinker on 11/1/2012 for PC
More On: G710+ Mechanical Keyboard
The new G710+ Mechanical Gaming Keyboard from Logitech joins its family of other high quality products that are focused on satisfying the many demands that gamers put forth in their hardware and accessories. The G710+ shares many traits of its previous mechanical keyboard counterparts with the inclusion of programmable macro sets, backlit keys, and generous support for multiple key inputs. While the G710+ doesn't include the features of more expensive keyboards with LCD panels and customizable backlighting colors, it does deliver a product that focuses equally on function and form with the introduction of Logitech's highly touted "whisper quiet" and "tactile high-speed" keys. With the sleek keyboard out of its box and connected to my computer, I proceeded with high expectations of both Logitech's often superior build quality and its bold feature statements.

In regards to the specifications, the G710+ features 110 anti-ghosting and backlit mechanical keys, six programmable G-keys with three macros each, numeric keypad, instant media access keys, game/desktop mode that can disable Windows and context menu keys, adjustable dual-zone backlighting for the WASD and arrow keys, support for 26-key rollover, a hi-speed 2.0 pass-through port, removable palm rest, and tilt legs. As well, the backlit keys feature four levels of brightness that can also be turned off completely.

Fortunately, the backlit setting is remembered after each shutdown and doesn't require any repeated input for the desired preference. I found that the backlit keys offered a good range of brightness levels from the overly bright to the more subdued and less extreme settings. While the dual-zone backlighting of the WASD and arrow keys is a welcome addition, it never quite provided any advantage within a game because I rarely glanced at the keys.


The G710+ marks my return to the world of mechanical keyboards as the traditional and near-silent membrane keyboards had long since been my preferred accessory. Every computer user has their own reasons for preferring either type of keyboard, but the mechanical variation has long been favored by gamers for their tactile and instant response timing. Their only major downside has been their overly loud clicking sounds, which most times can be heard quite clearly in the next room or cubicle. With the G710+, Logitech has been quite upfront about advertising the keyboard as offering "whisper quiet" key presses. Unfortunately, the G710+ does not quite deliver on that promise with key presses that while not overly loud, are still audible in comparison to a membrane keyboard. The G710+ is not yet the device that will convert those that have been avoiding mechanical keyboards exclusively because of the noise level.

However, for those gamers that stand by their mechanical keyboards will be happy to hear that Logitech has yet again delivered a superior product that lives up to the brand name. From lifting the keyboard out of the box to plugging in the dual USB connector cable, the G710+ feels solid in all of its components from the matte plastic finish to the glossy surface between the keys. The G-keys are encased within a orange background that offers a great contrast against the keyboard's black and grey color scheme. The backlit keys feature white lights underneath them, with orange and red lights included for the macro switchers. The one problem I had with the keyboard's appearance was the poor display of alternative function labels on various keys; both their grey font and low level of backlighting made them near impossible to read in certain circumstances.

The G710+ truly shines with its performance in games, ranging from everything from first-person shooters to role-playing games. I tested a wide range of gameplay genres and was continually impressed with the keyboard's ability to provide quick and tactile responses in-game. The G-keys and their alternate macro sets were a great addition to games that required quick access to frequently-used menus and complex actions. The G-keys and their macro sets are able to be programmed through use of the Logitech Gaming Software, which is a free download from the Logitech website. The software is easy to install and provides a wide range of gaming profiles that offer specialized functions that can be dragged and dropped upon a map of the keyboard. 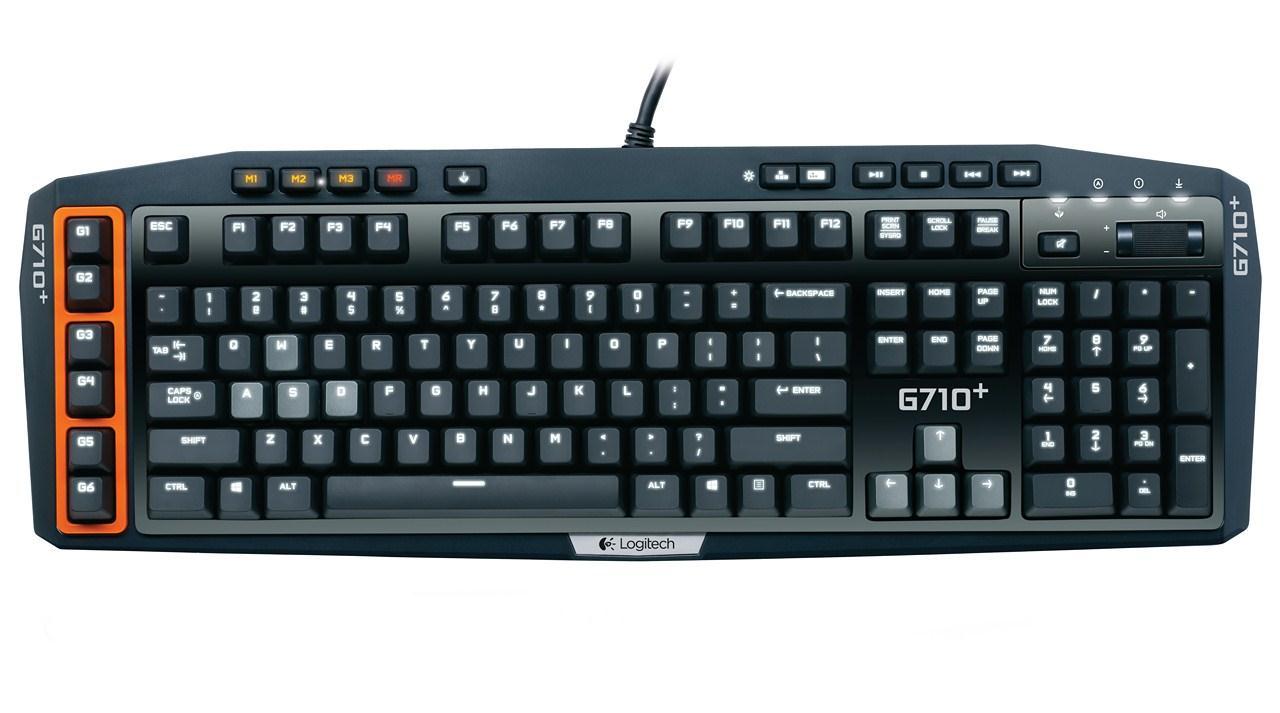 The software was able to detect I had The Elder Scrolls V: Skyrim installed and providing a list of specialized functions that I could add to the three macro sets of G-keys. These functions ranged from quick access to the various menus such as quests and the map, in addition to gameplay settings from toggling first or third person view to using dragon shouts. I was able to minimize the game and change these functions and their related keys instantly without ever having to close Skyrim. The G-keys and their macro sets are incredibly helpful in games for providing quick access to important functions and settings that too often require fumbling around on traditional keyboards for their desired result.

While they keyboard performs exceptionally well for gaming purposes, I had a rather difficult time with the more normal operations from typing e-mails and documents. Simple sentences or messages were always riddled from hits of the wrong keys. The placement of the caps lock key also proved problematic resulting in accidental toggles of shouting rage. While I understand that typing preference is up to each individual person, I felt that the mechanical keys just weren't as smooth as the more common membrane keyboards. Those that transition to the mechanical keyboard as I did will have to expect a short period of trial and error before feeling completely comfortable with the key presses. Once that period is over, typing became a fluid, comfortable, and quite audible experience.

The G710+ combines the solid build quality of Logitech with superior gaming performance to create an exceptional mechanical keyboard. While the G710+ doesn't truly deliver "whisper quiet" key presses or function quite effectively with normal typing tasks, it stands as a perfect product for gamers wishing to replace an aging mechanical keyboard or those individuals transitioning from a membrane setup. The price point of $150 might be a bit steep for some expecting additional features of a built-in LCD or customizable backlit colors. However, the remarkable build quality and the tested 50 million cycle life of the keys ensure this keyboard will be sitting on your desk for years to come. The G710+ from Logitech proves yet again their commitment to releasing superior gaming products.

The G710+ Mechanical Gaming Keyboard from Logitech is available now for a suggested retail price of $150.
The G710+ from Logitech is an exceptional mechanical keyboard that features superior build quality and quick and tactile performance with games. The G710+ is perfect for gamers looking to replace an aging keyboard or wishing to enter the world of mechanical hardware. The key presses that don't live up to the whisper quiet promise and mediocre performance with normal typing tasks are small distractions from an otherwise well-built and solid-performing gaming keyboard. Logitech delivers yet another noteworthy product that gamers are sure to appreciate upon the first key press.