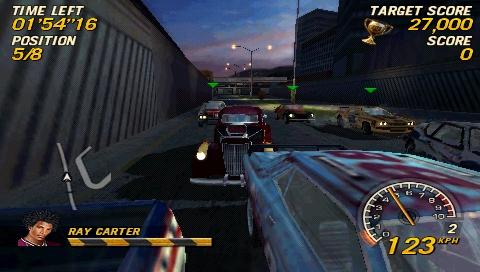 Written by Matt Mirkovich on 7/23/2008 for PSP
More On: FlatOut: Head On
Burnout was a franchise that convinced a lot of people that crashing cars and the carnage that followed could be a lot of fun. It was only a matter of time before another company would come along and think they could capitalize on that. And so another London studio, Empire Interactive unleashed their Flatout series of games. They would go on to sell moderately well. Well enough that the felt the need to take their game and put it on a console that is perfect for quick doses of fun, the PSP. Unfortunately there isn’t much that Flatout: Head On does on the PSP that Burnout hasn’t already done with a greater degree of success.

Flatout: Head On provides you with semi-visceral thrills as you participate in various races and events. You have the basic race modes where you’re encouraged to play it dirty, the destruction derby events where the winner isn’t always the last one standing, and the special stunt events that send your driver on a collision course with various objects as you attempt to score points by navigating your airborne driver to specified targets. These all sound like fun in practice but to experience them is nothing short of utter disappointment with various crippling aspects that make this game feel more like homework than fun.

There are a variety of race events, and all of the require you to be the first one across the finish line. If you happen to take someone out along the way by wrecking their car then you’ll get a cash bonus to buy some upgrades for your ride, or a new car altogether. The races are littered with objects that when destroyed add to the turbo meter above your speedometer and litter the race course. You also receive turbo boosts for crashing into other competitors. However there is a fatal flaw in gameplay rears its ugly head with this crash happy style. Objects and cars like to become glued to the front of your grill, and when that happens you suffer a massive loss of speed, allowing other people to pass you, so most of the time it’s better to just waste money in powering up the car in order to blow through the race. Of course all the upgrades don’t count for squat if you can’t keep the car on the road. If you do happen to go off course or flip over then there is a quick reset button that loves to put you back a good chunk of the track allowing others to pass you with ease.

The game also feels like it suffers from Mario Kart syndrome in that the other racers can easily catch up and run perfect races provided you’re sitting in first place, thankfully there are no power-ups to knock you out of contention. It also takes a painfully long time to unlock new races altogether, if you play through the career mode, you won’t see a new track until the final race of the fifth series.

The destruction derby events should be really straightforward, but due to some dubious math you may not always win if you are the last car standing. In order to accumulate points you need to damage the other racers, and in order to encourage you to do this there is a timer that counts down between each hit your car takes. Then there are the special stunt events designed to do as much bodily damage as possible to the driver. Basically you run the car to the end of a ramp and then launch the driver to various obstacles like rings of fire or basketball hoops. This is a lot more challenging than the various tutorials will make it look. I tried to copy the tutorial for the high jump and didn’t get nearly the results the computer received. So it feels really hit or miss on what happens once the driver leaves the car. I tried a multitude of events over and over again in order to get a higher score and eventually frustration kicked in and I shut the game off.

Flatout: Head On feels like a title that didn’t get a whole lot of love in graphics department. Textures are incredibly low resolution, there is seaming everywhere (for those that don’t know what I am talking about, it’s the white pixels you see between two points of geometry, most common in corners), and some really nasty pop-in of objects off in the distance. It is impressive however to have such destructible environments in the races, and to see stuff flying by is one of those cool moments that a game needs to have.

The music is a collection of what I love to call “Butt Rock.” To angry for alternative, and too soft to be metal, these tunes are meant to get you amped for racing. But all they made me do was save battery power by turning the volume all the way down. Tracks from the likes of Hypnogaja, Dead Poetic, and Luna Halo, if they are your thing then you’ll find something to like here. Overall though I couldn’t find a single track I enjoyed listening to.

The PSP has no shortage of racing games, and Flatout: Head On feels like just another entry being shoe-horned in to the PSP library. It doesn’t have much going for it aside from an occasionally fun stunt mode. But even that tends to get old really quick. You’ve also got some local multiplayer but that has to be something you and your buddies are really passionate about. All in all, I recommend passing on this game, there are many other titles that have the visceral sense of speed and fun that you are looking for.
What has four wheels, bad music, and lackluster graphics? Flatout: Head On! Save your money for one of the console version where this game can be better appreciated.