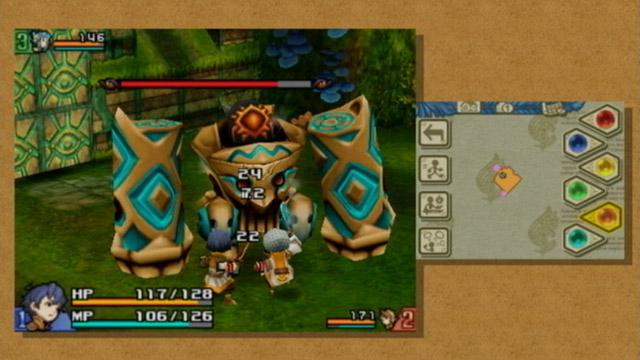 Written by Cyril Lachel on 5/19/2009 for Wii
More On: Final Fantasy Crystal Chronicles: Echoes of Time
Given all of the misses lately, you may not remember that Final Fantasy is a top tier franchise. While the numbered sequels never disappoint and there are the occasional spin-off surprises (Crisis Core: Final Fantasy VII springs to mind), most of the recent off-shoots haven't lived up to expectations. Unfortunately those hoping that Square Enix's newest Wii game, Final Fantasy Crystal Chronicles: Echoes of Time, would be the fresh blood the franchise needs are in for a rude awakening. While this game is cute and has some great ideas, it's impossible to overlook the game's multiple problems (both gameplay and technical).

Echoes of Time is more than an incredibly long-winded name, it's also a story about a small town that suddenly gets caught up in a mysterious crystal illness. Before you know it, you (and your friends) are traveling around the countryside battling bad guys, taking down bosses, solving devious puzzles and collecting all of the crystal shards to fill in the back story and resolve this problem once and for all.

Obviously there's more to the story. The game revolves around small world where there are two mountains (one that is completely iced over and another that is full of fire and flames), a big centrally located town, some mines, an aqueduct or two and a big forest. In other words, it's a really small area. And to beat the game you will find yourself going to these locations two and three times each, solving the same types of puzzles and battling the same kinds of monsters.

I'm purposely vague about the story, but only because what is there is pretty shallow. Don't expect the epic tale of good overcoming massive evil. In Final Fantasy Crystal Chronicles: Echoes of Time I felt like I was more of an observer to something that hinted at being interesting. The truth is, the story elements are only there to give you a reason to go from one generic level to the next. Most of the missions involve you battling through a level, collecting a crystal shard and then returning to this enchanted forest. And when you're not doing that, you're out finding more crystals and doing exactly the same thing over and over. The story hints at something bigger, but at the end of the day it all boils down to you dungeon crawling through only moderately interesting areas.

The key to the game is the multiplayer, which has been this spin-off's biggest asset since it debuted on the GameCube. Back in 2004 you used four Game Boy Advance units to control the four characters. Here you have a number of choices, including the ability to play online with other Wii owners, at home with a Nintendo DS owner or a combination of the two. On paper it looks like Square Enix gave you every possible way to connect, making it as easy as possible. Unfortunately it only looks like that on paper. In practice Echoes of Time is a multiplayer mess, full of technical problems and questionable design choices.

But before we get sidetracked talking about the laggy online experience and hair-pulling frustration that is trying to connect with friends, perhaps we should actually address the multiplayer gameplay. You see, the game's puzzles are made up of multi-person tasks, so that you will have to use a second or third person to stand in specific places in order to open doors, defeat enemies and unlock treasure. At first these puzzles are pretty cool, but before long you'll realize that most of these puzzle elements are recycled from one area to the next. If you understand how the puzzles work early on, then you won't have a problem solving the rest of the challenges, no matter how late in the game it is.

While I'm generally down on the simplistic way the puzzles incorporate the multiplayer experience, I do appreciate that each of the game's levels offers a different type of skill to learn. For example, when you're fighting through the library, you'll have to open doors by using the magic that floats out of books. In the ice levels you will have to thaw and free small patches of water in order to open doors and make your way to ladders. Each of the game's stages has something like this, something that is a little different from the other stages. While this is certainly a welcome addition, I was disappointed that the puzzles didn't go all the way with these ideas. Just as the puzzles start getting tough, the game starts to give you suggestions and hints, which ultimately makes the experience much easier than I would have preferred.

The controls are as simple as the story; you can hack and slash, use magic and use a strong charge-attack that takes magic points. That's about it. The six magic spells are available to you from the get-go and consist of a fairly generic list of familiar names. I'm talking about Cure, Phoenix Down, Fire, Ice, Lightning and one spell that will remove any ailment you have (no matter what type). You can choose between a few different types of basic weapons (sword, hammer, crossbow, etc.), add armor and do that kind of thing. In other words, the combat is wholly unspectacular. 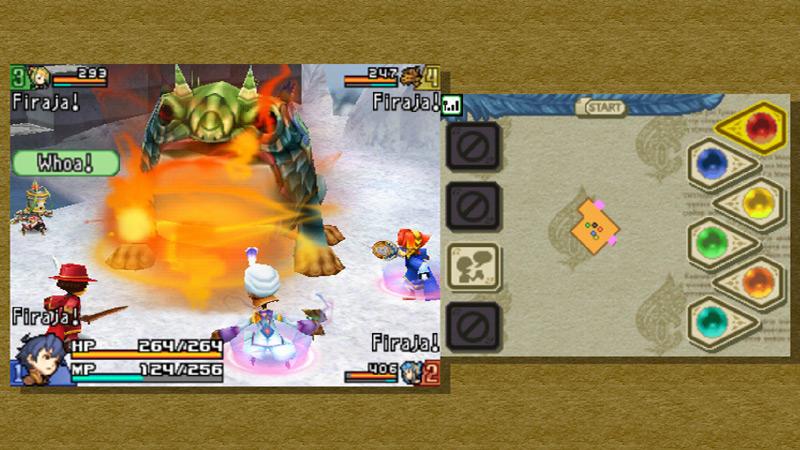 While you will no doubt die when playing this, the game itself is never very challenging. From the game's easy puzzles to the push-over boss battles, Final Fantasy Crystal Chronicles: Echoes of Time is a real breeze. In a lot of ways this feels like it was designed for a younger audience, the type of gamer that would normally be turned off by the epic story and political intrigue that permeates its way through the numbered Final Fantasy sequels. As a result, I never found myself investing in the characters. While I was there doing all of the fighting, it felt like the truly interesting parts of the game were taking place when I was away. To make matters worse, the game's big twist didn't make me feel any more connected to the characters. Ultimately I just gave up trying to like my character and got on with the mindless hacking and slashing.

For the most part the game's multiplayer is a lot of fun. But after going through the game I started to wonder if it had to do with the game's quality or the simple fact that adventuring with friends is always a lot of fun. Just look at how popular World of Warcraft is. The game is certainly fraught with problems, some of which could have been easily fixed. For one thing, the game features an annoying fixed camera angle that makes solving some puzzles much harder than need be. Would it have been that tough to give us a way of manually turning the camera?Sadly most of the problems seem to involve connection issues. When I played the game online with friends I found the lag to be more than I was willing to put up with. Even when playing with a Nintendo DS in the same room, I found that we would have regular connection issues. And then there's the matter of actually trying to play with anybody in the first place. Because you need to confirm friend codes, you can't just play the game online right out of the box. My friend and I had so many problems connecting that we eventually had sync the systems up locally just to get it to work. There's no reason I should have to jump through this many hoops just to play a game that is supposed to be all about multiplayer questing.

In case you haven't been paying attention to the development, Echoes of Time was originally set to be a Nintendo DS game. For whatever reason, Square Enix decided to port this portable game to the Wii. As you can imagine, porting a DS game to the Wii results in a number of problems, chief among them being the difference in graphics. Unfortunately this is a straight port, so the graphics haven't been improved at all. They are, for better or worse, blown up versions of the DS's two screens. 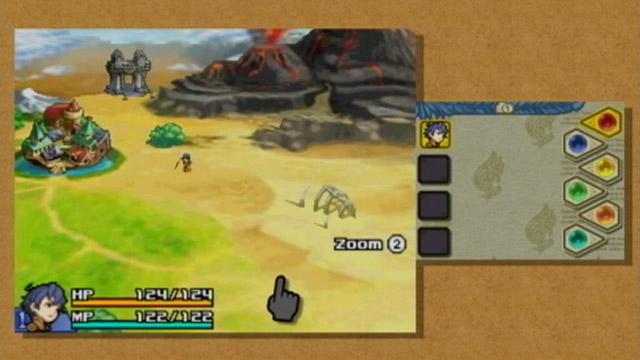 That's right, two screens. In an inspired decision, Square Enix decided to allow you to see both screens simultaneously. Instead of one being on top of another, Echoes of Time features two screens side by side. You can increase and decrease the size by using the plus and minus buttons, but you can never get rid of one and go full screen on the other. This solution isn't perfect, it makes switching spells, equipping items and using the second screen a real chore. What's more, when your cursor is on the menu screen, you are unable to attack and use magic. Usually this isn't a problem, but from time to time I found myself accidentally going into menus when I really wanted to fight a boss. It's all very annoying and I find it hard to believe that Square Enix couldn't come up with a better solution to the two screen conundrum.

Unfortunately what you will remember is all of the frustrating (and out of place) 3D platforming puzzles, the nonsensical storyline and the boring cinemas. The game is not so terrible that you curse ever putting it in your system, but it's also not good in any way. You will have forgotten large chunks of the game only minutes after turning it off for the last time. As much as I love the idea of a multiplayer Final Fantasy game, I demand more from my spin-offs.
Final Fantasy Crystal Chronicles: Echoes of Time is more than a really long title, it's also a multiplayer game with a whole host of game breaking problems. It is a game with a small cast of unlikeable characters, a boring story, lame locations and did I mention the technical problems? Echoes in Time is as mediocre as you can get. Surely you can do better than this.