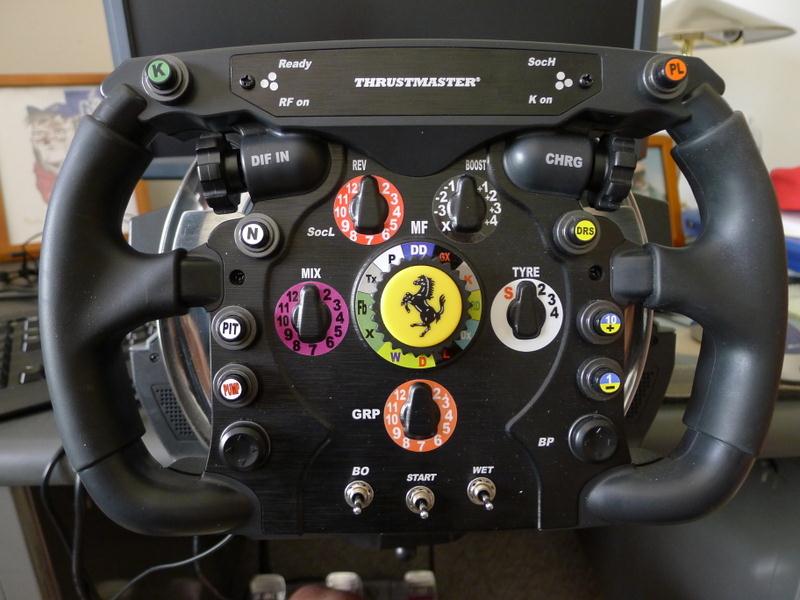 Written by Dave Gamble on 6/13/2012 for PC
More On: Ferrari F1 Wheel
When I reviewed the Thrustmaster T500R racing wheel last November, I had only very minor quibbles with its design. As I recall, I found the overall unit to be precise, powerful, and plenty of fun, with just a few irritating issues. The first was, not surprisingly, the cost of the unit. In the neighborhood of $600, this is a steering wheel that calls for a bit of pecuniary dedication on the part of the purchaser, to say the least. For that princely price, you get a high quality, well designed product that at the end of the day might leave you wishing that a couple of things had been done differently, depending on your taste in racing genres.
Specifically, I had two complaints: the shifter paddles were mounted to the wheel rather than the base, which made shifting gears while turning the wheel an exercise in hand gymnastics, and the wheel itself was too large for the open wheel cars that I prefer to race. I obviously hadn’t tripped across an issue that had somehow escaped the marketing folks at Thrustmaster, though, because soon thereafter I learned that a replacement wheel was available as an add-on, and that this wheel. modeled after the steering wheel in the Ferrari Formula 1 car, addressed both of my complaints, albeit after another $200 expenditure, a tough nut to swallow after the initial $600.
And here again, Thrustmaster is way out in front of me. Just a couple of weeks ago, they asked if I would be willing to take a look at what they call the Ferrari F1 Wheel Integral T500.  In easier to understand terms, this is the T500 with the F1 wheel instead of the bus driver’s wheel that comes with the T500R.  The wheels are actually interchangeable via a transplant operation that only takes a couple of minutes to accomplish, but being able to buy the wheel type that you want rather than having to buy both if you happen to be an open-wheel fanatic is a much better solution.  Naturally I agreed to their proposition.

There is no sense in rehashing the previous review when it comes to the base unit, so I will primarily concentrate on the Ferrari replica wheel itself.  The first thing one notices with this wheel is that it matches the base unit in its heft and tangible feeling of high quality components. In fact, an F1 purist will be absolutely aghast at the weight of the wheel; there is no Formula 1 team in existence that would put a wheel this heavy in an actual F1 car. The teams that design Formula 1 cars will spend hundreds of hours and untold dollars trying to shave just a few ounces off of the overall weight of the car, so there is no conceivable way that they would add back the three or four pounds of metal steering wheel Thrustmaster built.  Of course, a carbon fiber F1 steering wheel costs somewhere between $250,000 and Bill Gates’ net worth, so Thrustmaster can be forgiven for using somewhat less sophisticated materials.
The second thing one notices is that the plethora of knobs and selectors in the center hub of the wheel are fake. Purely decorative. Non-functional. But... they do add to the look of authenticity. Note that these knobs on a real car apply fine tuning to engine mapping, suspension settings, and the like. Few, if any, of today’s race sims are modeled to that level of detail anyway, so the fact that these controls are just eye candy isn’t a show stopper for the not-quite-professional-level user.
Even without the central controls being operative, there are still quite a few buttons, switches, and rotary controls to deal with. There are even a pair of small hat switches that are more than likely not available on a real wheel. These are, of course, a nod to the somewhat different challenges presented to the driver of a race sim when it comes to being able to look around at the surroundings. I also found it useful to map one of them to the functions of moving the driver’s POV up, down, left, and right.  Most of the switches are labeled according to their function in an F1 car, up to and including the button that the driver uses to get a drink of water while racing. For F1 fans, this means that there are dedicated buttons for the relatively new KERS and DRS systems. While I’m not sure that there are currently any F1 sims available today able to use this level of control, there are also rotary knobs that can be used to manage the KERS charge recovery settings and to adjust the electronic differential system. 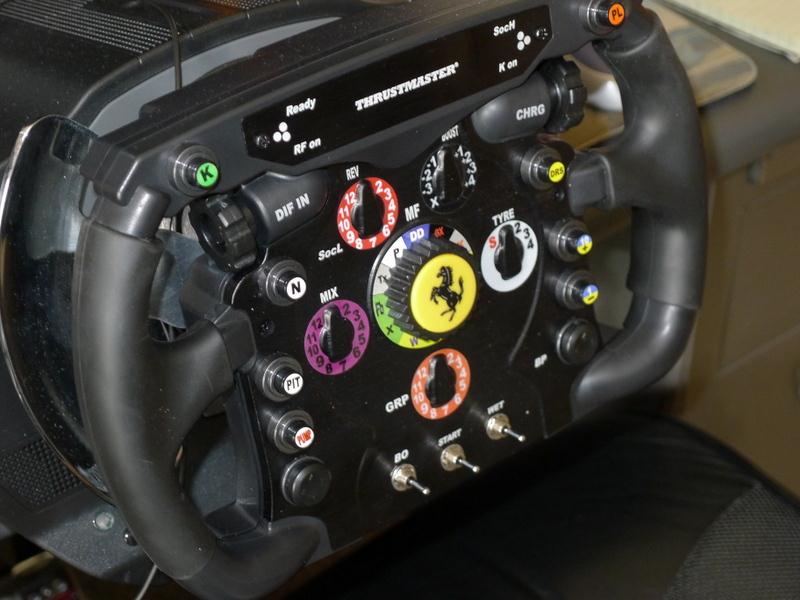 So, how does it work? Well, in the interest of diligence, I tested the wheel with Gran Turismo 5 on the PS3, and on the PC I tested with F1 2011 and iRacing.  Of the three, I found the most satisfying to be iRacing, but that mostly comes down to personal preference. On the PS3, I struggled with getting the wheel properly configured and never did solve the problem of getting the pedals to work correctly, but I got it working well enough to run some laps in a Formula car. Frankly, while GT 5 is marketed as a target product for the Thrustmaster, I don’t think the game really measures up to the quality of the wheel. I don’t think I’d spend $600 for this wheel if I was going to use it on the PS3.
The PC is a different story altogether. Both F1 2011 and iRacing benefited greatly from this wheel, although for different reasons. F1 2011 was improved more by having buttons that could be easily mapped to the KERS and DRS systems, but since I’ve never really felt a solid connection with the track surface in that game, the precision of the T500 didn’t jump out at me as it did with iRacing.  If there is any racing sim available today that would convince me to part with half a grand for this wheel, it is iRacing.
With the laser scanned tracks and the sophisticated tire model of iRacing, the powerful force feedback motors and the high resolution provided by the Hall effect sensors really come into their own. I wouldn’t say that I could feel every bump in the track, but I can say that the feel of the wheel responding to disturbances in the racing surface felt incredible. The strong resistance forces providing by the large motors also made cornering feel fantastically realistic.  I was fortunate enough to have the wheel over the Memorial Day weekend which meant that I was able to use it in the iRacing Indy 500 race. My car setup was anything but perfect, but it was good enough to run in the middle of the pack.
Due to setup weaknesses, I was tight in turn one, but loose on the exit of turn four. It was uncanny the way I could actually feel the car starting to slide as I approached the wall at the exit of turn four, only to feel the jerk of the wheel as the tires regained their grip when I finished the turn.  Simply amazing, and unfortunately, quite addictive.  I am ruined for the Logitech G25 forever; after boxing up the T500 for its return to Thrustmaster, my old G25 felt like warm apple sauce in my hands.
While nothing has changed to make this amazing peripheral any more affordable, potential buyers can now at least choose the wheel that best fits their chosen racing genre. Those that are racing high-end sims like iRacing will benefit the most, but the Ferrari adds vast amounts of utility and sexiness to more common titles such as Gran Turismo 5 on the PS3.