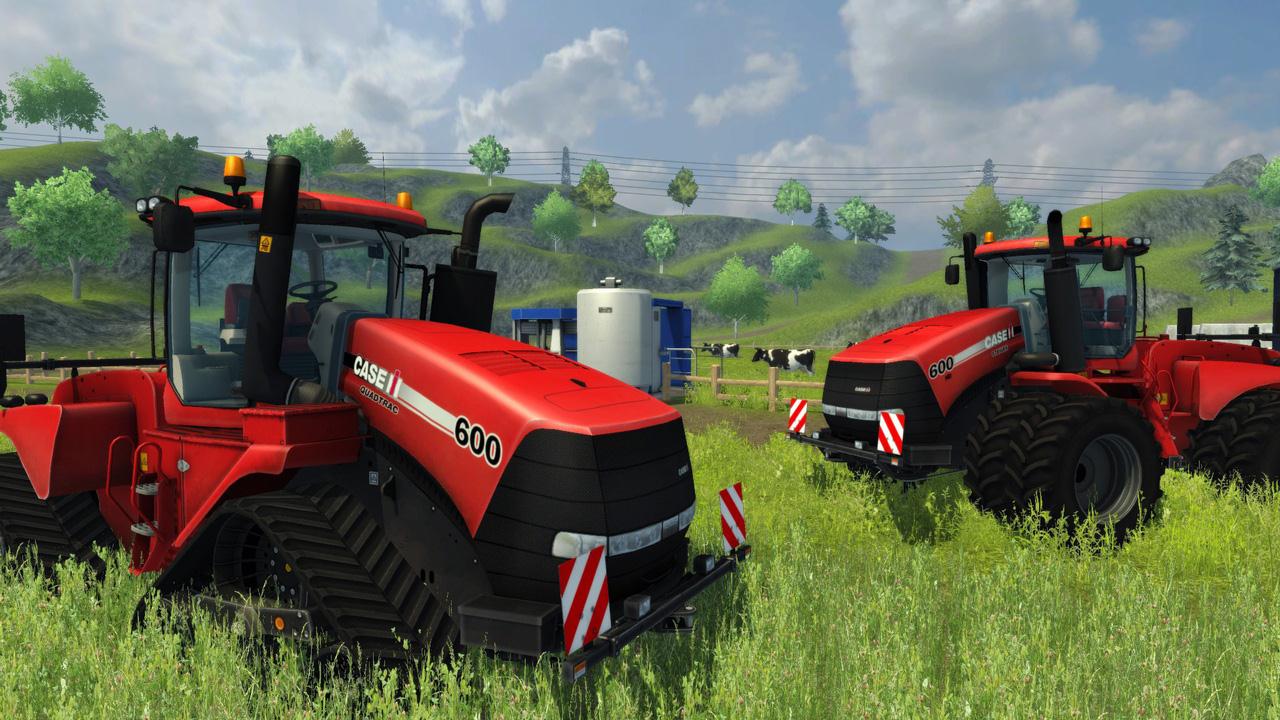 Written by Travis Huinker on 11/14/2012 for PC
More On: Farming Simulator 2013
Farming Simulator 2013 from developer Giants Software follows in line with last year's version by adding a variety of new content ranging from licensed vehicles to expanded crop options. The new features for this year's version include animal husbandry and a huge map with various fields that can be purchased by players. The primary gameplay modes include a single-player career and online multiplayer that supports up to ten players.

In career mode, players are given complete freedom from the beginning allowing them to choose how they'll proceed in creating profit. The online multiplayer allows players to either create a session with their farm or join other games in progress from all across the world. The game also includes 11 tutorials that cover topics from planting and harvesting crops to attaching farm equipment and spraying fields with fertilizer.


A bountiful harvest
There is certainly no lack of content awaiting players in Farming Simulator 2013 with options to not only tend to fields, but also an assortment of animals from chickens to cows. While the career mode is open-ended from the beginning, the primary goal of the gameplay is make profit through a variety of farming pursuits. Players can select from three difficulties that ultimately determine how much starting money and debt they begin with in addition to the money earned from harvested crops. The map of Hagenstedt is massive in scope with a total of 42 fields that the player can purchase along with a village and other specific locations such as pastures and shops. The map is complemented by a day and night cycle and various weather types such as rain and storms which can affect the state of crops.

The player's farm that's located at the map's center contains most of the necessary tools to begin farming with from storage silos to a chicken coop. Once players require additional equipment, they can browse through a selection of over 100 licensed farming vehicles and equipment that can be purchased from shops around the map. With various crops and animals to raise and even buildings such as wind turbines to purchase, players are given a near endless amount of options in how they make money within the game. Most of the tasks such as harvesting fields can be completed by hiring AI-controlled workers while players can focus on other more pressing matters. Many of the player's farming operations are assisted through the use of an in-game PDA that can display the map, weather forecast, current grain prices, and various data from personal finances to statistics.
. 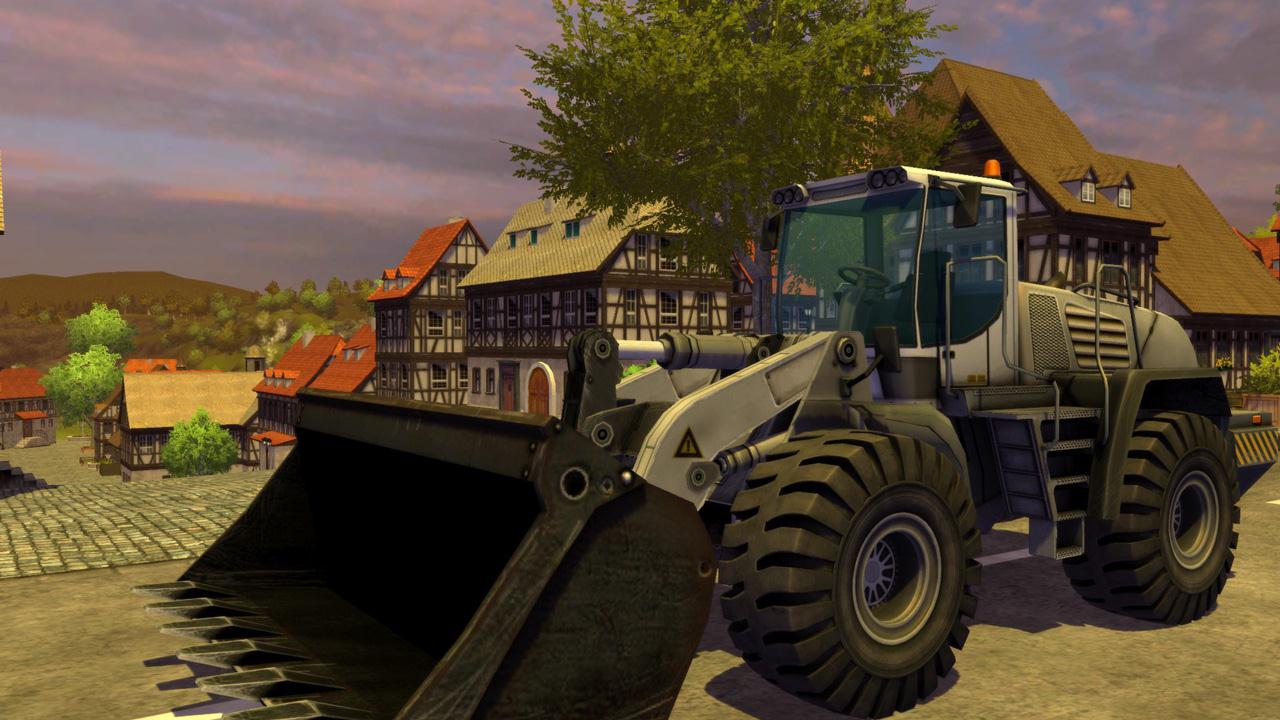 Some assembly required
While some of the game's tutorials are helpful in teaching players how to plow fields and plant crops, they still leave a rather huge gap in covering the other features from raising animals to actually managing a farm. Nowhere does the game explain to the player how to manage finances and deal with a starting debt that is never mentioned. No guidance is ever presented to players on how to sell crops in addition to a complete lack of information on purchasing and feeding animals. A simple in-game glossary neither offers assistance in actually finding locations on the map or even in providing basic information on completing optional missions that appear from time  to time.

The included manual offers some additional guidance on the gameplay mechanics, but far from the current norm of including basic information through in-game tutorials. Ultimately, players are left from the game's beginning without any guidance on how to either manage their farm or make profits. The gameplay feature of open-ended freedom is not an excuse for lacking any guidance on how to interact with the game world. Players new to the series will most likely feel completely overwhelmed upon starting a new career. It's an unfortunate situation in which the game contains a wide variety of interesting content, yet most of it's unreachable by the complete lack of guidance.

Farming with friends
In addition to the single-player career mode is the ability to either create or join online sessions that support anywhere from two to ten players. Players can take their single-player farm online and allow friends or strangers assist in any of the farming operations. Game hosts have the ability to kick other players that decide to cause mayhem rather than offering assistance in the necessary farming tasks.

When the game's multiplayer actually works, online sessions can be rather entertaining with each player tackling particular tasks that otherwise might be accomplished by using an AI-controlled worker. Unfortunately, multiplayer is plagued by an assortment of issues ranging from severe lag to the inability to join certain servers. Some sessions can take a few minutes for just syncing with the host's farm data, which can then result in joining a game that's suffering from lag. On multiple occasions, the multiplayer game would freeze for a couple minutes without any apparent reason. Players that are primarily interested in the game's multiplayer component are suggested to wait and see if some patches are released to fix the issues.

Greener pastures found elsewhere
While the licensed farming vehicles and equipment are rendered with a great attention to detail on exterior models, they suffer from static and low-resolution textured interiors. None of the vehicle dashboard meters or screens change as their only textures, which is simply unacceptable in a game that has the word simulation in its title. Most of the map's structures and various crops that develop in fields work well with the game's environments, yet suffer from an overall flat lighting system that would have benefited greatly from better shadows and dynamic lights.

The most severe offender of the simulation name in the game's title is the often-hilarious attempt at physics and weight. Nearly all of the farming vehicles and equipment contain no sense of weight and when bumped against one another result in twisted messes. Part of the gameplay is often spent simply trying to remove stuck or twisted vehicles after simple mishaps.

Only farming enthusiasts need apply
Farming Simulator 2013 is an often conflicting experience that stems from its wide range of interesting content that suffers from a lack of guidance, multiplayer issues, and unrealistic physics. The amount of content available is impressive considering the various licensed vehicles and equipment in addition to the massive map and farming options from planting crops to raising animals. Farming enthusiasts will appreciate the freedom offered in deciding how make profit and manage the farm's various operations.

Players that invest both the patience and determination to learning the gameplay mechanics and farm management operations will discover an immersive and detail-rich farming experience. Those players that are new to simulation and farming games will undoubtedly be met with far more frustration than entertainment. Farming Simulator 2013 offers an assortment of new and interesting content that will surely delight series fans, but unfortunately lacks the in-game guidance for players new to the world of farming and simulation games.

Farming Simulator 2013 is available now for Windows PC.
Farming Simulator 2013 follows last year's version with a wide assortment of new content from hundreds of licensed vehicles and equipment to a massive map with support for raising animals. Players other than farming or simulation enthusiasts will be frustrated by the lack of in-game guidance beyond a few brief tutorials that ultimately results in a game that can only be recommended to series fans.