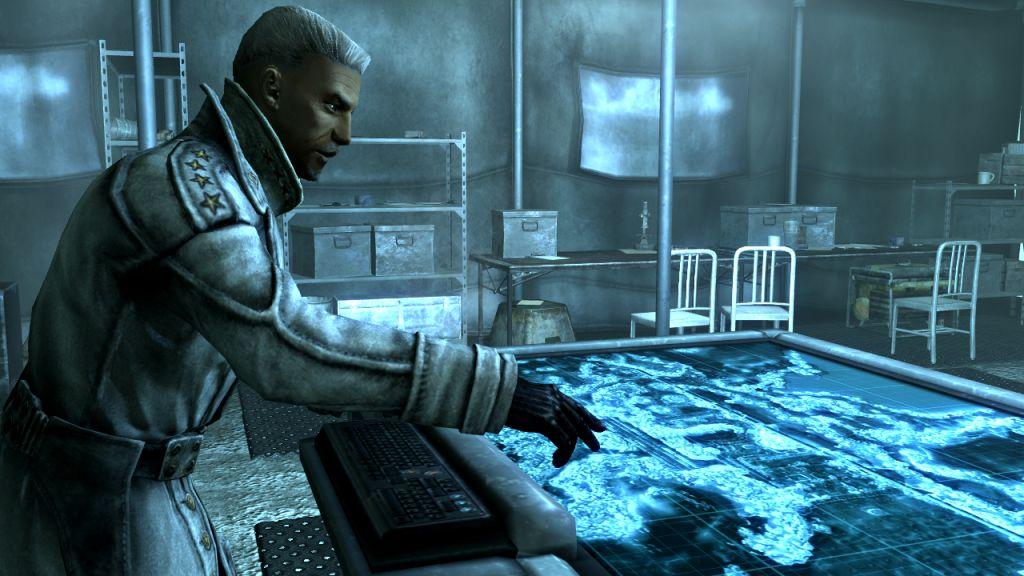 Written by John Yan on 2/2/2009 for 360
More On: Fallout 3: Operation Anchorage
Who doesn't want more Fallout 3 action? Bethesda announced three new items not too long ago and the first one has finally arrived. Fallout 3: Operation Anchorage will let you experience the liberation of Anchorage, Alaska from the Chinese before the bombs fell. You won't be traveling back in time per say but you'll access a military simulator that will put you right back in the action in this historic event. This DLC adds some new quests, a new perk, new achievements, and new items that you can use in the main game. The DLC, while welcomed because I can't get enough of the game, falls short on several levels though and might disappoint even some die hard fans of the game.

First of all, you're going to have to play from a saved game so you can't start from one that you've finished. I hope you made many saves throughout if you would like to play the DLC with a high level character or one that you don't want to have to do too much to finish the game. It won't be a while until Bethesda comes out with the DLC that lets you play past the ending so unfortunately you don't have much a choice in this aspect. For those already playing the game, this will be a non-issue. It's too bad Bethesda couldn't work a way in to have those that already finish try out the DLC. 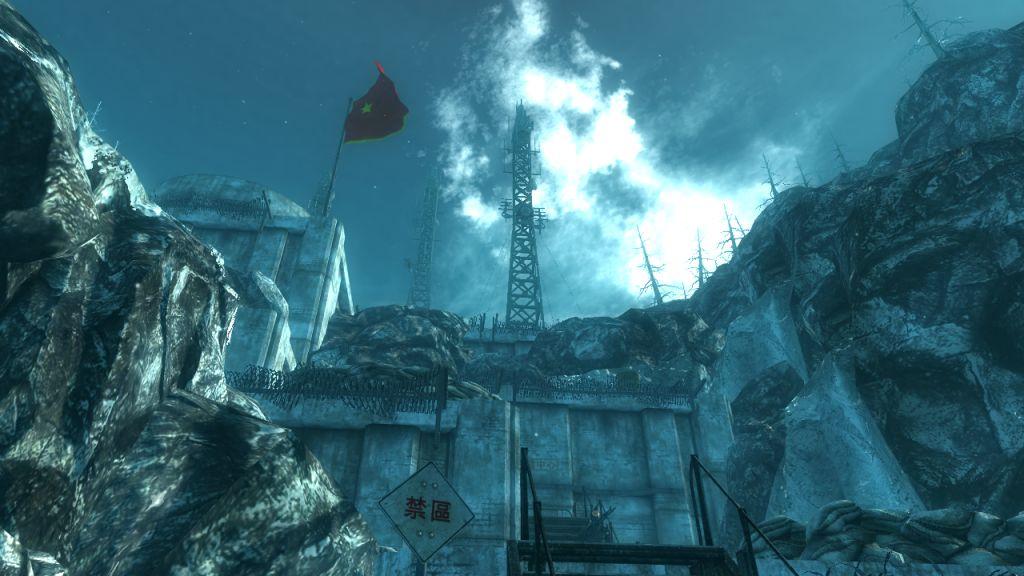 To play the DLC portion, a new point will come up on your map when you receive a radio signal. Just head on over and that's where all the fun begins. I won't go into spoiling anything about the quest details as for RPGs, I tend to be as vague as possible so that others can enjoy the content, but basically you'll be recruited to take part in a simulation of some of the battles that took place 200 years ago when the Chinese invaded Alaska. You'll be asked to participate in the simulation and be offered a reward if you should complete the objectives successfully.

The DLC is setup in sort of two halves where the first has you going around Commando style taking out the enemies. You'll sometimes be occompanied by help while the second half lets you command a squad to assault some targets. Because this is a simulation of the past, you'll see enemies disappear in a computer like erase when they are downed. That means no weapons will be available for you to pick up and no ammo to retrieve from fallen soldiers. To resupply your ammo and your health, there are health and ammo stations littered throughout the levels. It's rather sparse so you'll have to still be careful making your way around the simulation. If you do perish in the simulation, your character will also fall just like in the Matrix.

Four new enemies are introduced with Operation Anchorage with one that you'll only encounter once. The new enemies are OK but someone has to fire the trainer for the Dragoon's in the stealth suit. When you are invisible and you want to sneak up on someone, it's not good to yell at your enemies which is what these guys do. So, sneaking is not their forte and it ruins the surprise when they do come up to you. Another little weakness is VATS will show you where they are even when they are crouching and have their stealth field on. You can't hit them in VATS but when you go out of it, your crosshairs will be lined up on the "invisible" enemy and you can hit him a few times and most likely knock them out of their cloak. The spider mines didn't pose that much of the a threat either and were easily picked off by my squad mates. The final enemy is a tank which appears once throughout the DLC which is a little disappointing. So, the DLC will give you three new enemies you will encounter throughout the pack and one that appears once during the quest.

One of the missions will let you setup and command a squad. You'll be able to pick out the types of soldiers and use them to help you complete a few invasions. Commanding is not much more than just telling them to wait or attack though as they run around like any other normal NPC that joins you. I did find having the amount of squad mates with me on the last few missions made it pretty easy so I didn't fear being reckless as much as the first half of the DLC. You'll also have the ability to setup different gear sets as well for yourself later on. Whereas you picked up a weapon or so in the first part of the DLC, the second half where you command the squad is devoid of any weapon pick ups and you rely on the gear set which can be changed once per target invasion and the usual ammo that's found also in the first half of the DLC. I made the mistake once of heading out without setting up my gear making me pretty useless even with just grenades that I find in the battlefield.

The problem I have though with the missions in the DLC is that the game tries to be an action FPS when Fallout 3 clearly is not one and doesn't feel like one in the first place. I know Bethesda is trying something different with Operation Anchorage but the gameplay just doesn't feel right. I shouldn't be running around and gunning like I was in Quake or Unreal Tournament. Yes, you can try to sneak around and take enemies out quietly but there's little or lack of any role playing other than that. You can't repair anything, you don't have to worry about picking up health or ammo, and you don't have to use much strategy other than going in guns blazing to finish the act. It took me roughly 2.75 hours to get through the entire thing as the progress is pretty linear so it's also short. In retrospect, it falls short when trying to be an action game. 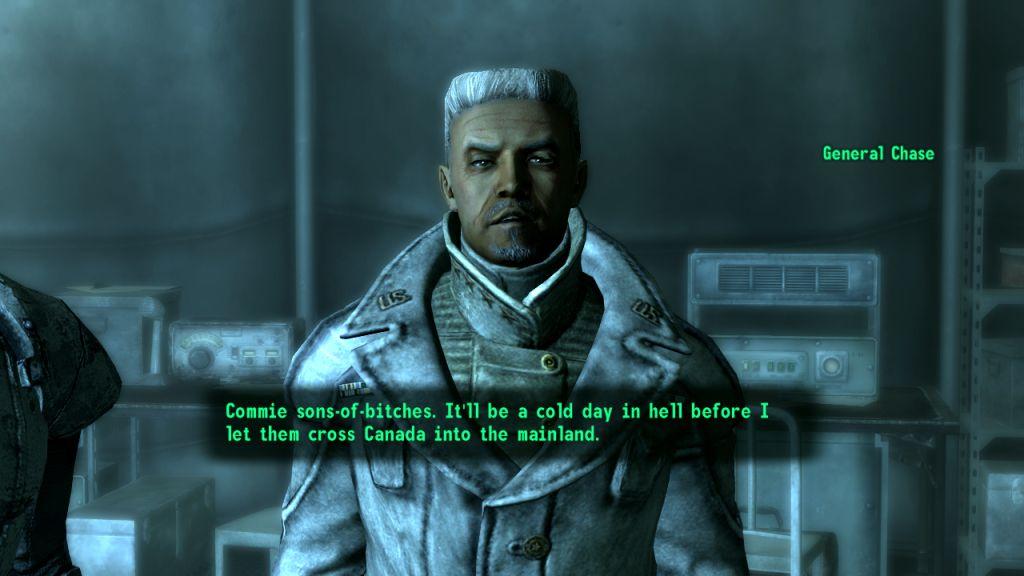 Once you get done with the DLC, you'll be afforded the opportunity to keep a combination of the three new armor, three new weapons available, and a robe made available. The Gauss Rifle will probably be the most popular as this rifle does 91 points worth of damage. It also has great stopping power as you'll be able to knock enemies down on a hit when you get a critical. For long range attacks, the Gauss Rifle has a scope so you can see with the power of the gun and the ability to shoot long distances, the Gauss Rifle's a nice addition to your arsenal. Those that love sneaking will really appreciate the Chinese Stealth Armor. Pair that up with the new shock sword that does 35 points worth of damage and you got a nice little combination. The new weapons and armor, while fun, don't make up for the value of the pack though.

The new perk that comes with the DLC is the Covert Ops. Acquiring this requires you to find 10 pieces of Intel in the DLC. The Covert Ops only adds +3 to Science, Small Guns, and Lockpick so really it's not that much of a perk when you think about it. A little disappointing yes and I wish there was at least one other one to pick up as the Covert Ops is a little lackluster.

Like quests in the game, you only have one chance through it so you better make it count or save it right before you enter the simulation so you can replay it a few times. Some might argue that paying $10 for DLC that you can only play once is bad but from a design point of view, I can see Bethesda making it a play once only content. As I stated earlier, it's adding another side quest and you don't do side quests in the main game again once you complete it. I can also see the side of those feeling that since they paid for it they want to be able to play it multiple times on the same character. As for myself, I am not bothered by the fact you can only play through it once so if you want to experience the DLC multiple times with the same character, save before you start the scenario. 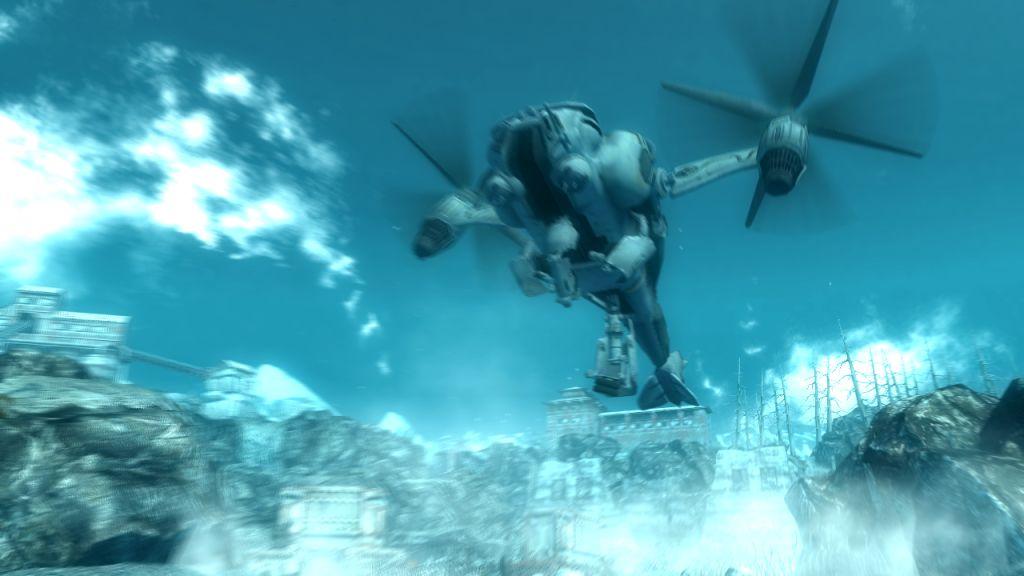 Now let's come to the cost. Coming in at 800 Microsoft points, I'd have to put it as on the expensive side of DLC when you think about the amount of content there is. Sure there are a few new items, some quests, and some new artwork but compared to the original game where $60 netted you as much as 50+ hours of gameplay, Operation Anchorage doesn't equate to 1/6th of the content when you put it all together. It's not horse armor but I still think it's priced a little high. 400 Microsoft points in my opinion would have been just right considering you can only play it once per game, the length of the quest, and the amount of new material added in as well as the items you are able to use when you are done with the simulation. It's the first of three announced DLC and while I did enjoy some parts of Operation Anchorage, it just didn't have that right Fallout 3 feeling to me. If you absolutely must have new Fallout 3 content then by means pick it up but you can live without going to the past, the new weapons and armor available, and the short quest and not miss out on too much in my opinion.
Fallout 3 is not an action game ans Operation Anchorage tries to do that with average results. The new weapons aren't bad though and the Stealth Suit will work well for those that like to play that way. Overall, it's a short DLC that doesn't have much in terms of role playing.