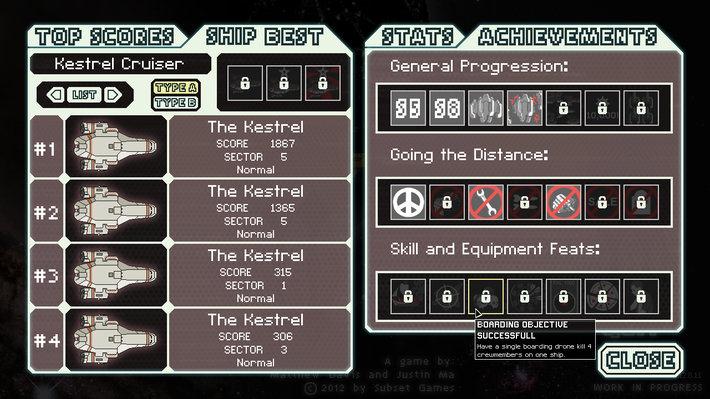 Written by Tom Bitterman on 10/31/2012 for PC
More On: FTL: Faster Than Light
There are two different kinds of space stories. On the one hand there is Star Trek and Star Wars. In these stories space is a big, exciting place where the hero can find his destiny and alien races are colorful and interesting. Zooming around space is fun and (mostly) safe, sort of like driving on a freeway or riding on a plane.

Then there is the other type of space story, like “Alien” or the new Battlestar Galactica. In these stories space is a big, scary place, full of things that want to eat you, or worse. The hero's destiny is likely to become a side dish for the fantastically evil aliens that lurk just outside his hull. Space travel is a dangerous proposition, the sort of thing one wants to be over as quickly as possible (but not too quickly).

The first type of story tends to get more games based on it. After all, if gamers wanted to lose all their time then we'd all just play Dwarf Fortress, right? Well, Faster Than Light (FTL) is more like the second type of story. You're a spaceship captain who is attempting to deliver an important message to your Federation buddies while the Rebel fleet does its best to stop you. The rebels want to stop you by vaporizing you so it's imperative that you stay one step ahead. 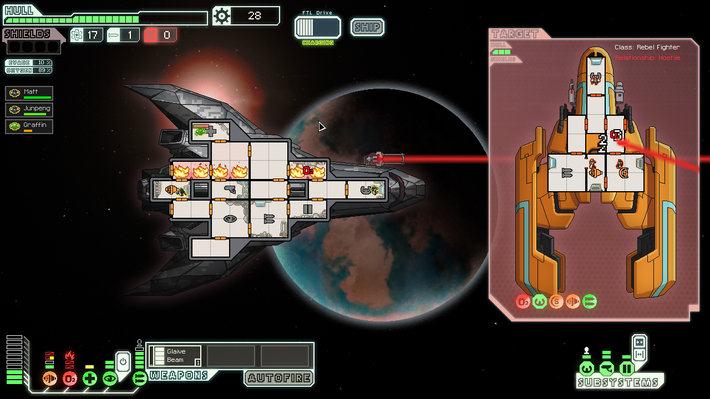 You start out with a basic courier ship capable of faster than light jumps from star system to star system. There are eight sectors between your current position and safety, and your ship will attempt to move from the left edge of a sector to the right edge by hopping from system to system. While you are jumping, the rebels expand their search area from left to right, pressuring you to keep moving even though you'd like to go back and pick up more fuel, or weapons, or crew members.

The mechanic of jumping from system to system makes gameplay episodic. Your ship will jump to one of several systems (of your choice) at which there will either be a battle, a text-based encounter, or a store. Stores are pretty self-explanatory. The adventures follow a basic decision-tree structure: an outpost might ask you to search for a lost ship, or fight off some pirates. Your decisions will determine if there will be combat and what rewards or penalties you will incur. These can be a bit opaque at times, in the sense that it is not clear what will happen as the result of a given choice, but it is satisfying to come out on the good end of these.

Most of the time it seems like there is combat waiting for you at the end of the jump. The rebels are everywhere and their advance scouts can find you even if you stay ahead of their “official” search area. Combat is pausable real-time, although it could have just as easily been turn-based without much real change. 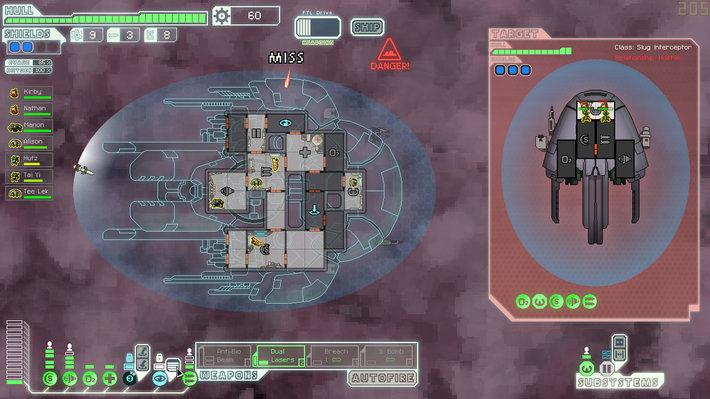 Your (and your opponents') ship is a two-dimensional floor layout with a bunch of rooms and corridors. Many room serve some purpose: they can supply oxygen, house the shield generators, fire weapons, be the cockpit, and so on. When a room is damaged, the function that room supports works less efficiently. For example, if the room housing the shield generator is damaged, your shield will be weakened. If the room is damaged enough, your shield will cease to work entirely.

Combat consists of your ship lining up on the left-hand side of the screen with your opponent's ship on the right. Weapons have a damage value and a recharge rate so you will spend a lot of time waiting for your weapons to recharge while deciding what room on the opponent's ship you would like to aim at. If your weapon penetrates your enemy's defenses that room will be damaged. Of course, your enemy is doing the same to you.

Luckily, you are not entirely defenseless in this struggle. Not only do you have shields and armor, but your crew lives in the ship, and basically runs around from place to place fixing things. Get hit in the weapons room? Send a crew member or two over to repair it. Of course, if that room gets hit again while the crew member is there it will be painful, but I told you this was that second type of story. 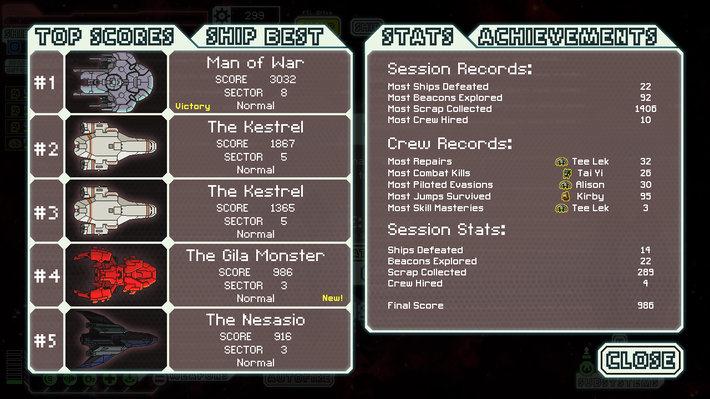 Space battles are an interesting set of tactical decisions. Should you aim for the enemy's weapons and hope to neutralize them before you take too much damage, or try for their shields so you can use more weapons and take them out more quickly? Maybe you could try to take out their oxygen-generation capability and kill their entire crew. There are lots of interesting decisions to be made here and many of them depend on your current state. If you have a lot of weak weapons, try to take out shields. If your shields are weak, go for the weapons. Your ship will always be in a different shape based on your recent battles and what you could afford to buy at the latest store, so these decisions are never simple.

After you get the basics, play settles into a routine. The strategic map is turn-based and play comes down to: jump, see what's there, (usually) fight, assess damage, decide where to jump next. The pausable real-time tactical map is where the fighting is done, and here play comes down to: assess your ship, assess enemy ship, formulate a plan, constantly monitor the situation, win, flee or die. The user interface and the graphics in general are clear and helpful. You will rarely be at a loss for useful, clearly-presented information. The overall tone is definitely old-school -- there is no 3D maneuvering or fancy explosions. The whole look is very board-gamish.

In tune with the old-school look is an old-school ethic. You are going to lose. A lot. And it won't always be your fault, although a lot of times it will. This is simply a punishing game. Be prepared to restart a lot of times. Since each game is randomly created, it's not even a matter of figuring out how to get through a particular tricky part of the map.The next game will be entirely different, so you may draw an easy few sectors, or brutally difficult ones. A minor irritant of having to replay so much is that you will find situations repeating themselves. It can be nice to remember how to navigate through a repeated decision tree but it takes away something from the game as a whole. This is the sort of thing that could be fixed in an expansion.

In summary, Faster Than Light is a strange mixture of old-school difficulty and graphics, board game simplicity and depth, and the episodic nature of some casual games. It's a strange mixture that works. FTL is simple enough to jump right into, deep enough to spend a lot of time figuring it out, and tough enough to make it a real accomplishment to win.  In FTL, just like Battlestar Galactica, everything is trying to kill you and every day is a struggle just to make it to the next day.
Everyone can pick it up and play but only the truly dedicated will stick with it until the end. Get ready to kill all your crew members. Again.