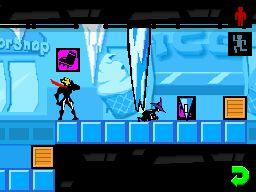 Written by Cyril Lachel on 12/2/2008 for DS
More On: Exit DS
Exit was one of my favorite portable puzzle games ... when it was released two years ago on the PSP. And I also loved the version they released last year on the Xbox Live Arcade. So what took them so long getting it over to the Nintendo DS? This should have been a no-brainer, it's the type of game that would flourish on Nintendo's popular handheld, yet we had to wait two and a half years for it to finally hit this dual screened portable? There's no doubt that this is still a solid puzzle game, but coming all these years later it feels somewhat anticlimactic.

In Exit you play the dark and dashing Mr. ESC, a professional "escapologist" who is tasked with saving a bunch of helpless people from all sorts of terrible disasters. The game is a mix of Lemmings and Prince of Persia, taking the best elements of both games and turning it into one of the most compelling puzzle games of the last five years. Mr. ESC is not a superhero with crazy powers and super strength, instead he's a regular caffeine-addicted guy who seems to know all of the best ways to save the day and rescue the helpless.

t first the game looks like your standard 2D platformer; you control the well dressed Mr. ESC as he searches around a burning building for survivors to save. As you play through the first few stages you will quickly realize that this is not your standard platformer, the game moves at a deliberate pace and requires you to use your head more than your reflexes. The concept is simple enough, it's your job to get each and every one of these survivors to the exit, where they can get the medical attention they deserve and you can move on to the next disaster.

The game comes with ten different disaster scenarios for you to contend with, including everything from the aforementioned building fire to flooding to blackouts to a snow storm to electrical damage. Over the course of the game's 100-plus levels you will witness just about every major disaster you can think of, all presented using the game's beautiful art style. Of course, you'll have to do more than just admire the game's graphics if you're going to beat the game. No matter what it is you are battling (or, in most cases, avoiding), you'll still need to rescue the survivors and get them to safety.

Survivors come in all shapes and sizes, so be prepared to rescue kids, young adults, grown adults, and the injured. Each of these survivors have their own quirks, so in order to complete the levels you will need to figure out how to help them overcome their fears and handicaps. For example, kids aren't able to climb tall objects, so you'll need to pull them up in order to get them to the exit. On the other hand, children can often go where the grown adults can't, so Mr. ESC will need to use them to get into some areas to pull levers and push buttons. On the other hand, the injured survivors require you to physically pick them up, which can definitely slow down the action (and make it impossible for you to jump and climb). Thankfully you can hand off these injured survivors to other grown adults, but they'll still slow down the whole process.

As with all puzzle games, half of the game is spent learning what you can and cannot do. The game is at its best once you've memorized all that you can do and start delegating the tasks to the rest of the survivors. At first this is fairly straight forward, however by the end of the game you will need to use every single survivor in exactly the right way to get everybody to that exit safely.As a fan of the PSP and Xbox Live Arcade games, I was horrified by the control scheme when I first turned on this Nintendo DS version. Instead of the standard D-pad controls, the game expected me to move my character and save the survivors using the touch screen. In theory this shouldn't be that big of a deal, the game has a slow pace and often feels like a point and click adventure game. But after a dozen puzzles or so I realized that I just couldn't take it anymore. The touch screen controls simply don't get the job done, which is essential when you're trying to save people. Thankfully you can turn off the touch screen controls and revert the game to the standard D-pad/face button layout that I am so used to thanks to the PSP and XBLA. 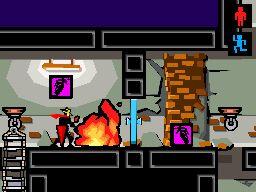 The game's graphics and sound haven't changed much over the last two years. The game is still features an impressive cartoon styling, using a lot of silhouettes and straight lines. The biggest difference here is the aspect ratio, while the PSP and XBLA games were both widescreen, this Nintendo DS game is presented in the standard 4 x 3 screen. At first I worried that this would cause a problem, but after playing a few rounds I barely noticed it. The top screen features the level map, which is certainly one of the more helpful additions to the game. All in all, the game's presentation is on par with the other versions, even if it's not widescreen.

The game's box makes mention of a Nintendo DS WiFi mode, which certainly intrigued me. Unfortunately the "online" mode isn't worth saying much about. It is essentially a leader board set-up that allows you to compare your score and time with people all across the world. I guess that's not a bad thing, but I was expecting more. Then again, this is not one of those games that lends itself to online play, so I'm not sure what I was expecting. PSP gamers were able to go online and download hundreds of new levels to complete; unfortunately none of the extra content seems to be available in this version of the game.

Regardless of whether you're new to the series or a seasoned pro, there's plenty to like in Exit DS. While it seems odd that the game would finally make it to the Nintendo DS two years after the PSP game debuted, it's nice to see the franchise alive and well. Once you change the control scheme and learn what you're doing, you can have a lot of fun playing through more than 100 levels of disasters. Even if it feels like you're just doing the same thing over and over, you'll be curious to see what disaster the game throws at you next. By the end of the game you will have sworn that you had seen every disaster possible, but I'm sure Taito can concoct a few new ones for an Exit sequel. At the low, low price of $20 it's hard to pass up one of the best Nintendo DS puzzle games, even if you've already gone through it before on another system.
Mr. ESC is back to drink coffee and save the day. With more than 100 levels to complete, you'll be at Exit DS for some time to come. Unfortunately the game doesn't feel as fresh two years later, but that shouldn't keep you from having a great time playing through this disaster-filled puzzle game!