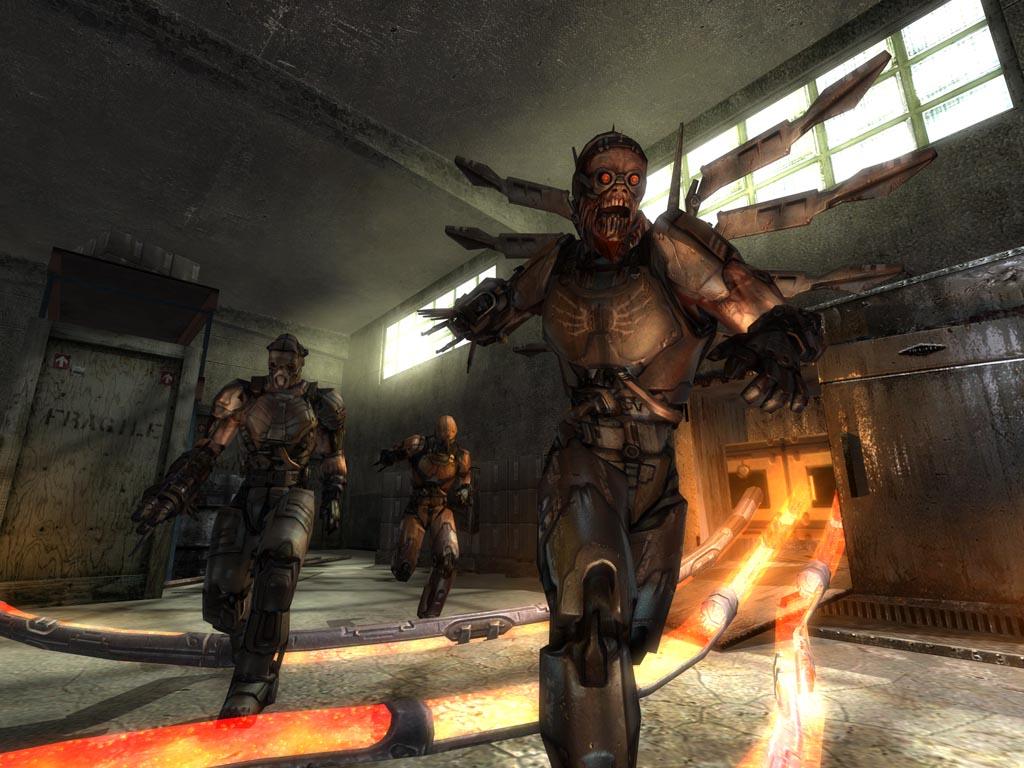 Written by Sean Colleli on 11/28/2007 for PC
More On: Enemy Territory: Quake Wars
Even though they are working on a new game with a new engine, Id software won’t let the Quake series die. Because they are currently occupied with making Rage, Id relegated development of the latest Quake title to Splash Damage, a partner they’ve worked with before. Splash Damage released Wolfenstein: Enemy Territory a few years back as an expansion pack for Return to Castle Wolfenstein. Now they’ve given the Quake universe the team multiplayer treatment with Enemy Territory: Quake Wars—this means humans, Strogg, and some serious tactical combat.

Let me get this out of the way first: if you’re expecting a lengthy, story-laden solo game, prepare to be disappointed. The game takes place during the Strogg invasion of Earth, as indicated by the opening cutscene. In other words, this is a prequel—you aren’t continuing the story of Corp. Matthew Cain from Quake 4, or even the nameless marine from Quake 2. The invasion sounds like a cool opportunity to fill in some background, but alas, Quake Wars is strictly multiplayer. The story serves only to set up the game, and the only solo experience you’ll get is playing the computer. Quake Wars is intended to be played with other people.

If you played the Wolfenstein version, Quake Wars will be very familiar. You choose one of the two teams (Earth Global Defense Forces or Strogg, instead of Axis and Allies) and then play as one of the five classes. You and your team are deployed in your starting territory, and then move to complete various objectives located around the map. You either defend your turf or take the offense against the other team, depending on the situation. This may sound a lot like any team multiplayer game, but think of it as Team Fortress on a grand scale.

The maps are huge, and have three or more objectives apiece, which range from hacking turrets to storming strongholds. Each class serves a distinct purpose, and while there are corresponding roles on each team, some of them differ in key aspects. For example, the GDF Medic restores health instantly, but the Strogg Technician takes a while to revive a fallen comrade. To make up for it, the tech can also replenish ammo and turn dead GDF soldiers into spawn points. The other classes include engineer, spy/sniper, support, and infantry. I liked how the engineers weren’t the only class that could erect turrets; the support class can also build some heavy artillery, but they can only be fired remotely when the target has been “painted” by the player.

The weapon assortment is also divided up according to class, but there are some familiar Quake series guns to keep with continuity. Old friends like the Hyperblaster and Railgun make a return, along with the typical assortment of pistols, SMGs and explosives. A few of the classes have specialized grenades; the air strike smoke markers were especially fun. The involved system of checks and balances between the two teams makes playing on each a unique experience, and avoids the “palette swap” feeling that some team games have.
Each class can also earn upgrades for performing specific actions or completing objectives. Players can gain XP and field promotions, which they can then use to level up class exclusive abilities, weapons and even vehicles. Upgrades are good for a single three map campaign, but are lost when another campaign is started.

When on the offense, making headway is the most important goal. Even if a team hasn’t made much progress, there is a way to get moving quickly: vehicles. The last Enemy Territory lacked this feature, and it opens up Quake Wars’ gameplay significantly. ATVs, hummers, tanks and even aerial units can be taken into battle. These can be used to transport players into a hostile area or for clearing out ground defenses. Many of the vehicles’ mounted weapons can only be operated by a second player, further emphasizing the necessity of teamwork. Heading into a warzone without a buddy manning the turret is a bad idea, and will earn you a toe tag fast.

The vehicles are all about taking ground, and the offensive team wants to establish territory as quickly as possible. Setting up camp lets players spawn much closer to the front lines, and thus reach objectives faster. This is accomplished by taking key points on the map and building defenses, by driving a large “fortress” type vehicle to that location. One established, these mobile command posts become defendable strongholds, equipped with heavy turrets and spawn points for vehicles and players.

As you can see Quake Wars has a lot to offer, but it might be a little too much for novice players. The layers of depth, from the class options, upgrades and objectives to the vehicles can be a bit overwhelming at first. You’ll definitely be playing longer at a shot than in many other team multi games. The host of a game can set the match’s time limit to whatever they desire, but to have a really fun time (and complete all the objectives) you need at least twenty minutes on any of the game’s massive maps. This sustained combat, the forward push or the trenching in, feels a lot more like tactical war than the short and sweet matches of Team Fortress 2. A fun game of Quake Wars takes team coordination and strategy, so don’t go in expecting a mindless fragfest.Quake Wars follows the general visual style of Quake 4, so most of the Strogg units look similar to their Quake 4 counterparts whereas the GDF soldiers look slightly more primitive than Corp. Cain and his buddies. Because the game takes place on Earth (and not the war torn, ultra-industrialized Stroggos), it’s the first time the Quake series has explored some more realistic locations. To accomplish this, Splash Damage used a newly developed addition to the Doom 3 engine called MegaTexture. This basically lets the game load one gigantic high-res texture across the entire terrain, making a unique environment across the landscape with no tiling or seaming.

I appreciated this technique where it was apparent, but to be honest most of the time I was concentrating on the battle at hand. It certainly makes the environments looks more seamless and realistic, and probably helps keep the framerate smooth. There’s some decent variety in the maps—desert, industrial, forest, snow—but it isn’t anything you haven’t seen before in this type of game. The Doom 3 engine is still a very impressive piece of programming but the games built on it are all starting to run together. It looks fantastic every time, with that signature leathery normal-mapped appearance, but I wish someone would do something besides dystopian sci-fi with it. Quake Wars looks great but it suffers from the same problem Quake 4 had—it looks too much like Doom 3 and not enough like Quake 2, giving it a sense of identity crisis.

Quake Wars sounds much as you’d expect it would. Many of the sound effects are new, surprisingly, but there are some recycled one from Quake 4 in there too. The weapons and vehicle turrets have the same “clanking” sounds that made them feel a bit underpowered in Quake 4, but at least we get to play around with some better weapons this time.

The music reminded me of both Quake 4 and Doom 3. It was sparse, only used when necessary, but had the epic flavor of Quake 4. There were pieces for the menu and loading screens and various fanfares for events in-game, but there weren’t any tracks that looped ad nauseum during the matches. I appreciated this minimalist approach; with matches lasting as long as they do, the last thing I want is some industrial track repeating over and over again.

It’s a little hard for me to recommend this game as a sure buy, because there are a number of circumstances that have to fall in place before Quake Wars is really enjoyable. Despite the inclusion of bots, Quake Wars is only a lot of fun when you have at least ten or so people playing, and the more humans on the field the better. The solo campaign is completely computer controlled, so you aren’t getting the epic sequel to Quake 4—this game is a prequel, and a multiplayer themed one at that. It also takes some thinking and planning to win a match, and the complexities might turn off newcomers. Enemy Territory: Quake Wars is a game for the Battlefield fans, the hardcore crowd who play games like a team sport. One thing is for sure: Quake Wars will be a blast at any LAN party.
The Quake series takes an unexpected turn into Enemy Territory. While it is multiplayer based, Quake Wars isn’t much like Quake 3 Arena, so you’ll have more fun playing it with a tactical approach. The hardcore people will enjoy the huge maps, complex objectives and deep class systems, but more casual players looking for a simple shooter might get overwhelmed.