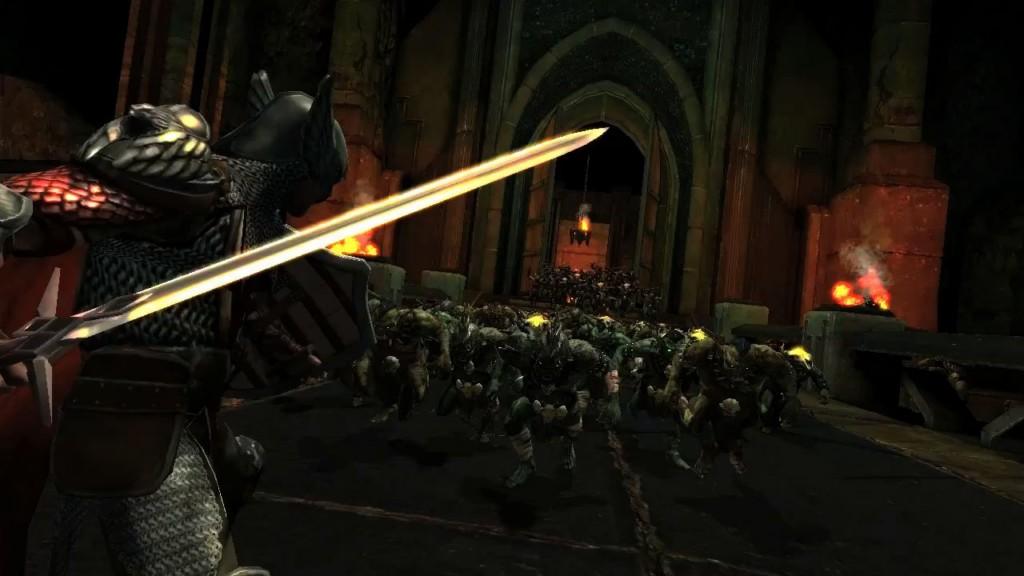 Written by Sean Cahill on 6/23/2011 for 360
More On: Dungeons and Dragons: Daggerdale
I'll be the first to admit it:  I was never a big fan of Dungeons and Dragons.  While RPGs were a big part of my early gaming collections, I was never drawn into the world of D&D, with the exception of Hillsfar on PC.  In this installment of the D&D series, Daggerdale caters to not just the leveling up style of a classic RPG, but goes the route of the Hack and Slash, making it a big draw for anyone who isn't even a fan of the long running series of games.

Daggerdale is set on the continent of Faerun, primarily in the Mines of Tethyamar.  You play as any one of four characters at your disposal, broken down by race-specific classes:  Human warrior, Elven rogue, Dwarven cleric, and Halfling mage.  While the characters themselves have good detail to their models, there is no customization in their looks or appearance, although changing your armor throughout the game will alter their clothing as you progress.  Once you have selected your character, you will have to go through the standard RPG-style point assignment, choosing from any number of abilities that will specialize you in certain aspects of combat.  For example, as a warrior, you can focus on either being proficient in one-handed or two-handed weaponry.  There are also defensive skills to work on, as well as building up your special attacks and the power that they have when you inflict damage upon an enemy. 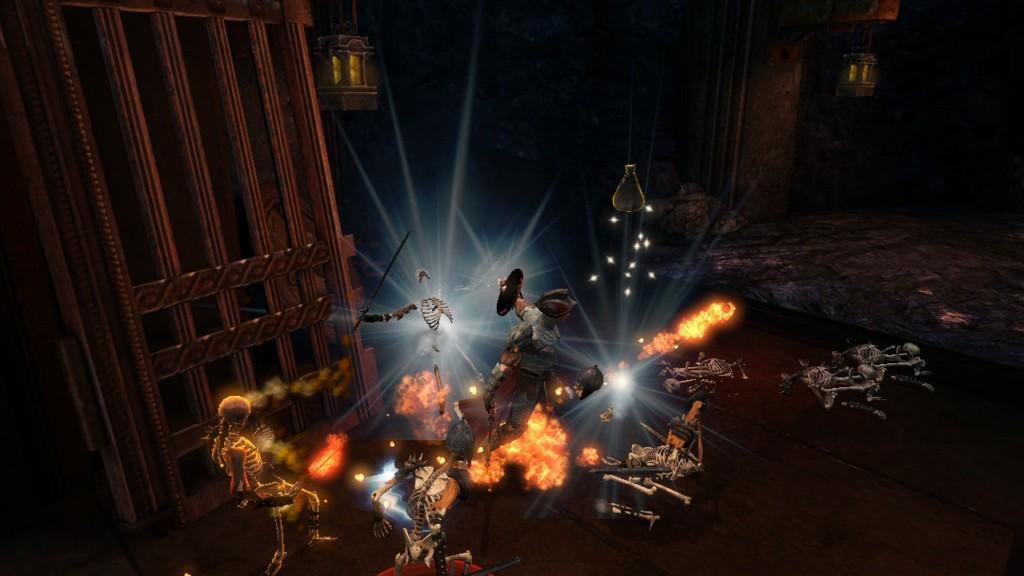 The primary interface of the game is your standard heads up display, including a status bar in the top left of your screen that has your character's health and how much experience he has accumulated thus far in his or her current level.  There will be a map in the top right that will show your immediate area, with various symbols to designate where there are quests, goals, and NPCs that you can interact with.  In the lower right of the screen is a hotkey area, breaking down which attacks you have assigned to which button on your controller.  As you start out, your default layout will generally include your main melee attack, a ranged attack, and healing potions or spells.  While progressing throughout the game, you will build up special attacks as you level up, which will be put on your hotkeys as well, although to access these, you will hold an additional button.  On the Xbox 360 version, for example, you will hold the left trigger to access these during combat.  It's a fairly straightforward layout, taking a page out of many past titles that have utilized this system.

Leveling up is a fairly simple process.  Completing quests and killing enemies will be your source of growth.  Enemies rarely attack you solo, as the groups I encountered throughout the game would range from as few as four to as high as twelve.  Anyone who has played games such as Dynasty Warriors will feel somewhat at home, though not to the degree that they experience in that series.  Enemies also respawn in this game, though it does take a period of time for this to happen, adding a degree of difficulty to the game that makes it a decent challenge.  If you explore an area for too long and you haven't planned accordingly, you'll find yourself fighting the same enemies to escape a section, possibly without items to heal yourself.

The combat itself is pretty straightforward, so anyone with experience playing hack and slash type games will be right at home with this title.  Enemies are never in short supply, and you will have to use skill instead of just blind swinging to kill most stronger enemies, knowing when to use combinations of strong attacks instead of just your standard melee.  On top of this, most of your weapons and spells will have different effects on enemies.  Undead monsters will be more susceptible to what is known as radiant damage, for example.  Weapons and armor will have these added effects in their descriptions in the character status menu where you arm your character, determine what armor and accessories to wear, as well as whether or not you want to keep items that you have found or turn them into gold.  Each section of the game will have different enemies that have varying strengths and weaknesses, which are depicted on their status bars as you approach them. 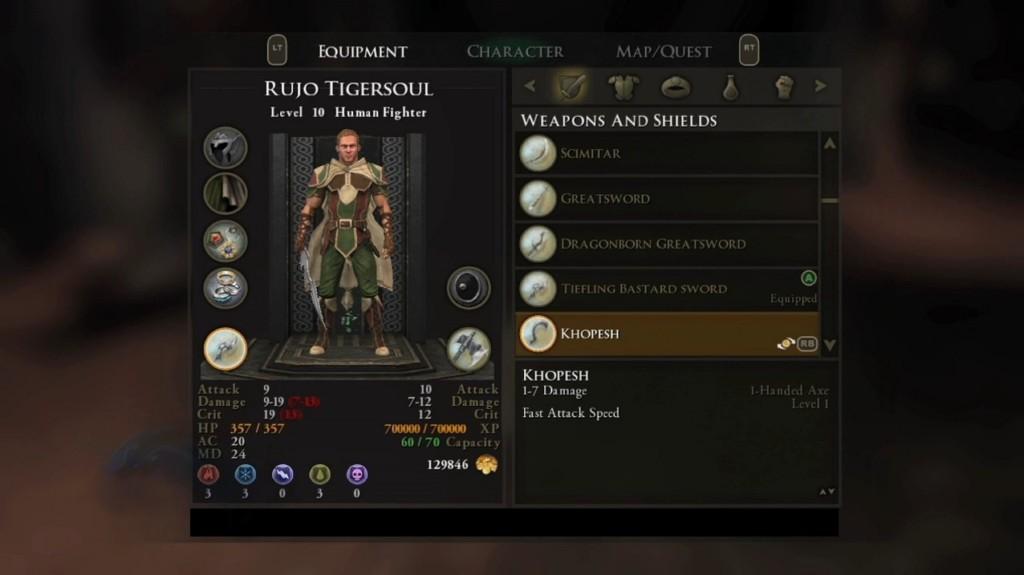 The title, though, is not without its flaws.  One of the biggest complaints I have about this game is the camera angles and the problems that it causes.  There are only two views that you have to choose from:  High above the character, and really high above the character.  I generally went with the closer option, simply because if you choose the highest angle, it's difficult to tell what's going on many times in combat because it takes you a little too far from the action.  However, the biggest problem with the camera is that there is no adjustment to anything that is above you.  It is easy to get blocked out of the view because of a lantern that is hanging overhead or a random wooden bar that is a support beam.  This caused many headaches early on in the game, simply because you could get caught in a mob of enemies at level one or two and not know what hit you before you were dead.  Also, for those of you who are not a fan of destroying barrels, you are going to find that barrels are your only real source of gold early on, and there are a lot of them.

While the game has some depth to it (I finished the game in just under eight hours), there is nothing that separates it from any other hack and slash that I've played in the past.  There is no innovative style that makes the game unique.  Sometimes this is not a bad thing, but I felt like I was just plodding along throughout the game.  The quests themselves that you accomplish aren't exciting in the least, usually just entailing your character running somewhere and either talking to an NPC to "save" him or destroying something while enemies attack you.  Also, interactions with NPCs can't be any duller than this.  There is no voice acting in the game, with the exception of the opening scene and the ending scene, both of which are not full-motion, just pictures that change with the storyline.  Characters in the game will grunt at you for their voice acting as you read their dialogue.  It worked for The Legend of Zelda, but it doesn't work here.  Figuring out where to go can also be a challenge at times, given that the map in your status menu does not scroll at all.  If it is off screen, you have to run close enough towards your objective to see if you are in the right direction or not, wasting valuable time and forcing you to fight your way through enemies that you killed once more, only to figure out you've hit a dead end.  Simple fixes like this could improve upon the title's overall appeal, but it seemed as though shortcuts were taken at several levels.
Originally, I had this game pegged a little higher on the grading scale, enjoying the combat that it offered. However, with a plot that really isn't exciting, quests that can bore you to tears, and problems with simple things such as camera angles, maps, and character development, it just falls short of a title that is truly worth having. For fifteen dollars, there are better titles out there to download. Daggerdale will certainly give fans of repetitive combat what they look for, but little else.