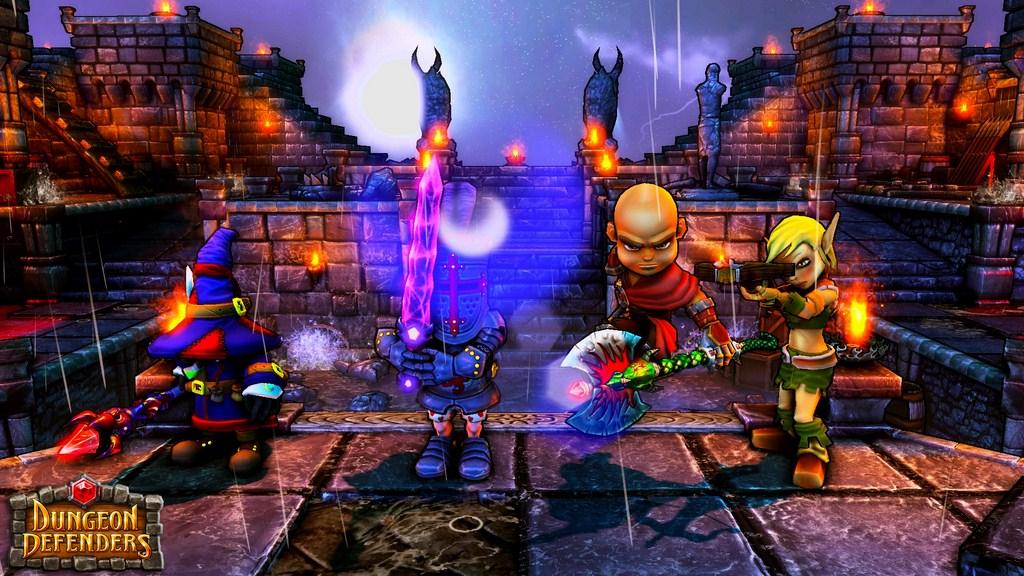 Written by Matt Mirkovich on 10/26/2011 for 360
More On: Dungeon Defenders
Starting from humble beginnings, Trendy Entertainment has taken their well received mobile phone game Dungeon Defenders and shared it with the console and PC world, and I for one could not be happier. I'll admit that I didn't know about Dungeon Defenders until it arrived on my Xbox, but now that it has, I'm excited to tell you, dear readers, that this is one of the most fun Xbox Arcade titles I have played in quite a long time. Marrying RPG elements with the tower defense model and a splash of the brawler genre has created a game that is intensely gratifying to play and is made even better with friends.
The core of Dungeon Defenders is to set up traps that will harm enemies that are out to destroy the Eternia Crystals, powerful magic stones that have been used by heroes past to seal up ancient evils. Well the heroes are off on duty, so it's up to their childish wards to hold down the fort. You'll play as one of these miniature heroes-in-training, teaming up with up to three other friends, and you'll set down traps or get your hands dirty in combat when dealing with the orcs, dark elvs, goblins and ogres looking to raid the castle. 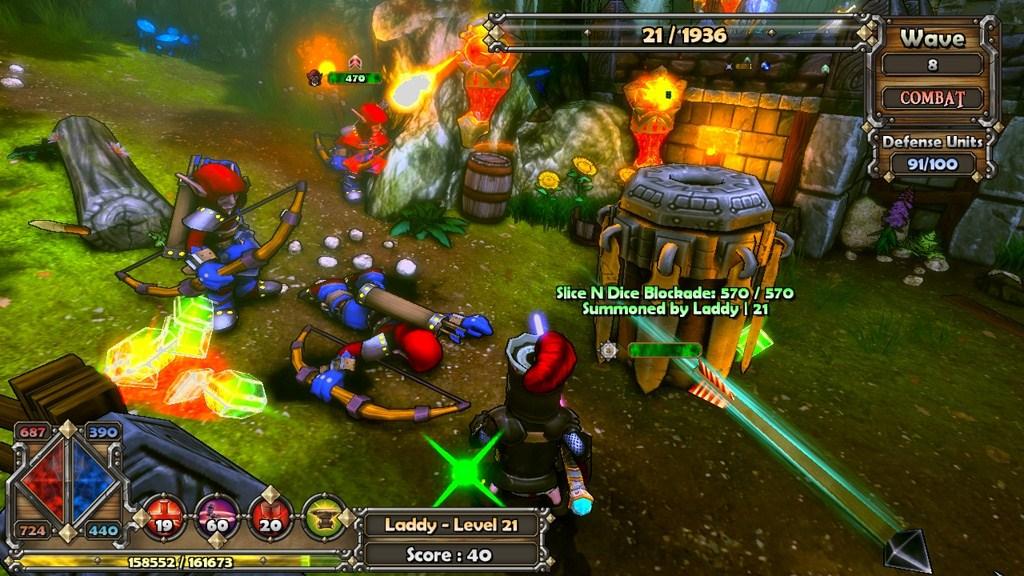 Each character has a variety of traps that they can use, and each character plays decidedly different, with my favorite being the squire. He's a middle of the road character who balances between trap ability and physical ability. His basic traps act to shield and slow down enemies with bumper blades that repel enemies, while his higher end abilities deal heavy damage with bowling ball canons and a whirling dervish of blades that will grind up foes that get too close. And when the going gets tough, he can get in the mix and deal a fair amount of damage on his own, with weapons that offer a lot of nods to other games out there, looking like the buster sword from Final Fantasy 7, or the Soul Edge from the Soul Calibur series. The other characters include an apprentice mage who sticks to dealing damage from a distance with magical canons, or the huntress who offers a bit more of a challenge initially with small range traps that will grow and eventually fill the screen with their destructive power. Lastly there is the monk who is for players seeking a major challenge, he doesn't lay down traps, he lays down auras that mimic status spells from RPGs past, he's suited for people who like to deal damage over time and encumber enemies.
Once you've made your character choice, it's time to get to work on protecting the castle, which means setting up your traps in the build round, which for an added challenge can have a timer added to it, making your build period much more frantic. I really appreciate that this is even an option and that it's not on by default, little touches like this are great for casual players and those looking for a challenge. Once your traps are set, bring on the hordes of enemies, who will either be marching to a certain demise, or to the heart of your base where the crystal resides. Each stage consists of about eight waves of enemies, and their numbers grow as you progress through the stage, providing you with new dropped items and more mana when defeated to summon more traps and strengthen the ones already out on the field or heal yourself if you're in dire straits, but odds are that if you're at that point, you've probably already lost. The only bummer here is losing at any point in the waves of enemies means you go back to the start of the whole stage, not just the start of the round, so some maps can be quite the time sink if you're getting to the end and you wind up taking it on the chin. Thankfully the experience you gain still continues to accrue and you can level up even in a loss. You can take the mana left over at the end of each stage and bank it to be used to purchase and strengthen items like pets, or armor, or weapons. Or you could just dump it in to a new character to help them grow. 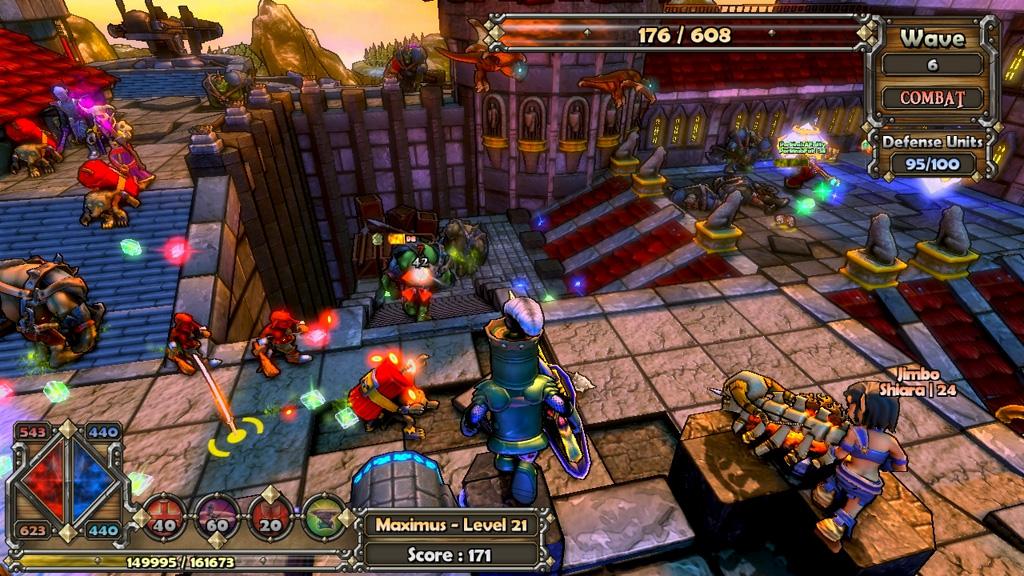 This game makes great use of the Unreal engine and does all kind of neat graphical tricks but it doesn't feel excessive. It also proves that the Unreal engine can do something other than that next gen brown, because this game is loaded with color and makes liberal use of lighting effects and particles. The characters and enemies look great, and do a good job of matching their source art. What's impressive is how many enemies get crammed on screen and there's never any slowdown or hits to the framerate, so kudos to Trendy Entertainment for pulling that one off. Audio gets a little stale after a while which my only gripe, as there's one two types of music, combat, and non-combat, but you're so engrossed in battle that you don't really pay much attention to it.
I honestly have nothing but praise for Dungeon Defenders, it's a fun game at a great price that everyone should pick up. It does a great job in picking the best parts of tower defense games, RPG games, and brawlers, nothing feels excessive or out of place. Trendy Entertainment has done console gamers a great service in bringing this game out. My only hope is that this game doesn't get swept up in the holiday tide of games vying for people's attention, because this is one of the better releases of the year.
A surprise entry for one of my personal favorite games of 2011. Dungeon Defenders is a standout title that anyone who calls themselves a 'gamer' should own.