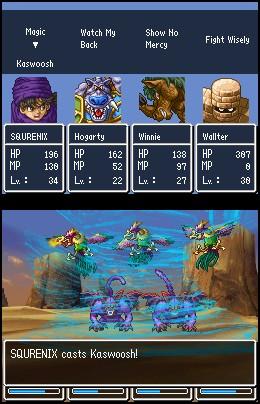 Written by Cyril Lachel on 3/24/2009 for DS
More On: Dragon Quest V
Hot on the heels of Final Fantasy III and Star Ocean: First Contact, Square Enix is bringing eager adventurers another handheld remake of a long-lost 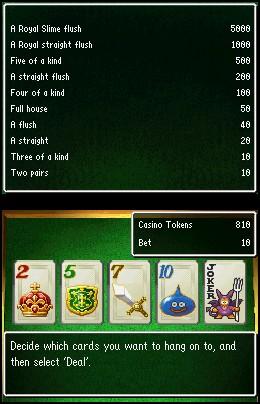 classic role-playing game. Like so many of Square Enix's 8- and 16-bit games, this 17 year old adventure game never made it to these shores. It's a shame too, since Dragon Quest V: Hand of the Heavenly Bride is easily one of the company's most engaging and emotional adventure games. It's full of memorable characters, a cool time-shifting story and enough good ideas to remind you why around the world Dragon Quest is one of the most important franchises.

In a lot of ways Dragon Quest V plays exactly like every other game in the series. You play an adventurer (that you get to name at the beginning of the game), fight a bunch of adorable monsters and ultimately save a lot of people from being enslaved. However, where this game sets itself apart is when it comes to the way the story is told. Instead of being a straight forward tale of a young adventurer's struggles to defeat evil once and for all, this game expands on the story to encompass twenty years of this one hero's life. It's a unique idea that only proves to heighten the drama and make the emotional core all that more rewarding.

You start out the adventure as a young boy, the son of a famous warrior. After sailing the high seas, your famous pops decides to get some work done at a local village. Unfortunately that means you're going to have to entertain yourself, which certainly spells trouble when you're an adventurous young boy. Before long our hero (and his new friends) are getting into all sorts of trouble, battling monsters in caves, saving cities and befriending ghost-like characters who uncover an alternate dimension. You know, kid's play.

Unfortunately, early on our young hero is captured and forced to watch his father die on the battlefield. Now he's a slave and forever changed, looking for answers (and his long-lost mother). And so the adventure begins. Throughout this lengthy adventure you will run into all kinds of new (and old) friends, take vengeance on the people that ruined your life and ultimately save the world from pure evil. And you'll do all this by using the tried-and-true turn-based combat mechanics of all other Dragon Quest games.

It's the game's twenty year time span that really makes this game special. In so many other Japanese role-playing games we are rushed from one city to the next only to never fully understand each character's plight. This game is different. It may have a simple look and traditional gameplay, but over the course of the game you get to see how your actions alter the fabric of this game world. Sure it sometimes gets sucked into a number of role-playing clichés, but there's something about coming back to the city you grew up in only to find it changed because of your actions. The game really feels like it's about something, even if it is ultimately telling the same kind of story you've heard before in other Dragon Quest games. 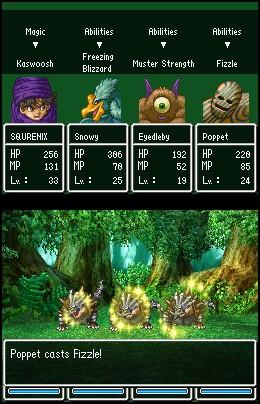 Like it or not, the combat in Dragon Quest V remains the same. That is, you see all of the battles in a first-person point of view, lining up all of the bad guys right in front of you. You choose whether each character is going to attack (and whom they are going to attack) or if they want to use magic. The game does give you a little more strategy than that, but that is, for the most part, the crux of the combat engine. Not that there's anything wrong with that, I found the game's simplistic combat to be rather refreshing after having to memorize all of the menus and nuance of recent Square Enix adventures.

What really strikes me about this game's presentation is just how old school it all looks. The developers (ArtePiazza) have done an excellent job of recreating every town, cave and other world in beautifully textured polygons. However, this game does not look like either of Square Enix's other recent 3D-enhanced role-playing games. You are not up close and personal with these characters, instead you see the world exactly how you would if you were to import the game on the Super Famicom (Super NES over here). You can rotate the camera angle, but outside of that the game's perspective is exactly how it was 17 years ago. This ends up giving off a decidedly old school look, all while looking like a modern interpretation of the material. I like it and would certainly like to see more Square Enix remakes take this graphic style.Even better than the over world graphics is the attention to detail put into each and every one of the monsters you encounter. Dragon Quest has always been about creating a world full of endearing (and often cute) monsters to battle. Let's face it; at least one of the popular Dragon Quest monsters has gone on to have their own E-rated spin-off. Sure these enemies are adorable, but that doesn't stop them from being able to defeat your whole party if you let them. Each of the game's multiple enemies has a unique look and animated moves. It's a real joy to come across each and every one of these little buggers, even when you are woefully outclassed.

Better still, weapon-based combat isn't the only thing you get to do with these cuddly creatures. Some enemies can be recruited into your party, giving you 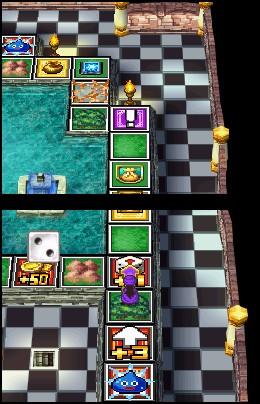 yet another character to help you fight your way to victory. Like your traditional human friends, these monsters can be leveled up and will even accept the same sorts of weapons and armor. The nice thing about these helpers is that you don't have to pay too much attention to them if you don't want to. You can completely ignore this aspect of the game if you see fit. However, if you're especially hardcore, you can take on all sorts of different characters and figure out which is best for you (or the situation). I wouldn't be surprised if there are people that really geek out at this aspect of the game, doubling the play time just to collect each and every one of the available characters.

Unlike some of Square Enix's other recent Nintendo DS titles, Dragon Quest V wisely avoids all of the touch screen gimmickry. You won't have to control your character using a stylus or push the screen to trigger magic spells; instead you play the game using the traditional D-pad and face buttons. In that sense it plays almost exactly like the Super Famicom original, which is exactly how I like it. The only real change to this version (aside from the polygonal graphics) is the fact that both screens are used to show your location, giving you a lot more visibility when you're in town or fighting through those pesky dungeons.

Unfortunately not everything is new in Dragon Quest V. Old school role-playing gamers will no doubt notice that the dreaded random battle is alive and well in this port. Seeing as this is a staple of the old school RPG I didn't expect the developers to take it out completely, but after playing through Chrono Trigger it's hard to go back to a game where you have to fight it out every three steps. Thankfully there are ways around the random battles (including items you can use), but there's no denying that this is one of those ancient RPG clichés that should have been addressed in this remake.

If you can get past the random battles and the often ludicrous dialog, you'll discover that Dragon Quest V is one of the best adventure games of all time. Best of all, this is an adventure game most American gamers never had a chance to experience (and if they did, it wasn't in English). Even without the presentation of a Final Fantasy III or IV, this Dragon Quest remake holds up remarkably well. The storyline is poignant and I love the idea of watching your character grow and fight through twenty years. This is a game that is simple enough to keep casual adventurers happy, while at the same time giving hardcore fans a reason to sink their teeth into it. No matter what kind of gamer you are, Dragon Quest V: Hand of the Heavenly Bride is definitely worth your time and money. Hopefully this won't be the last Dragon Quest remake Square Enix has in store for the Nintendo DS.
On the surface it looks like a simplistic role-playing game with cartoony graphics and a less-than-serious story. But Dragon Quest V: Hand of the Heavenly Bride is so much more than that. It's a deep adventure game full of memorable characters and an epic story. It's a game that takes you on a journey that lasts some twenty years. And best of all, it's a quest you likely have never gone on. For that reason alone, Dragon Quest V is a must-own!