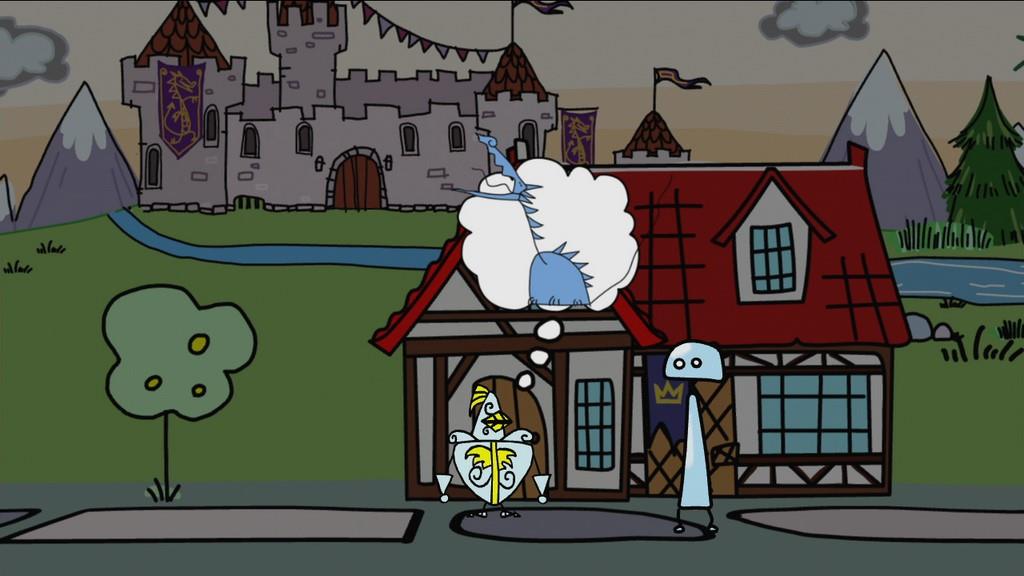 Between all the first-person shooting, swashbuckling and sports simulating, there hasn't been a lot of hugging in 2013. Doki-Doki Universe is about to change that. From the creator of ToeJam & Earl comes this year's most endearing game, an adventure that takes an abandoned robot across the universe in search of friendship, understanding and, most importantly, humanity.

Doki-Doki Universe is the story of QT377665 (QT3 for short), who has been dropped off on a small asteroid by his owner, a young girl named Lani. For 32 years our hero stands idle, his only friend a red balloon. As the game begins, Alien Jeff (a small alien with an equally dinky spaceship) discovers the abandoned robot as he's cruising through the solar system. After hearing about the young girl, Jeff convinces the reluctant robot to explore the universe in hopes of understanding humanity.

This sets QT3 on an adventure that spans twenty different planets, each with a set of inhabitants who are in serious need of help. As luck would have it, this model of robot is capable of summoning over 300 objects, including humans, dogs, houses, aliens, vehicles, ice cream cones and just about anything else you can think of. As he helps the planet's citizens, QT3 begins to learn the complexities of humanity. Many planets have individual stories that help explain jealousy, love, pride and compassion. With some luck, this little robot will finally grasp what makes us human.

The twenty planets are based on a number of different countries, time periods and holidays. QT3 will talk to the animals in an Africa-inspired planet, freeze his antenna off in an icy planet, get spooked out by the Halloween planet and even negotiate with a sea creature in an underwater planet. And that's just the start; other planets are inspired by Japan, Egypt, Hawaii and New York City.

Not only do these twenty planets look completely different, but each is filled with a wide assortment of colorful characters. You can expect to find fellow robots in Robodachi, rabbits in Bunnipi and snowmen in Brrr. (Yes, the planet's name is Brrr.) There are more than one hundred characters to talk to, each with their own set of problems, likes and dislikes. If QT3 can keep all this straight, he might actually learn a thing or two about humanity.

There are only a few types of quests to solve, none of which are especially difficult. Most characters need something to make their life whole, which requires QT3 to summon one of the 330 items found in the game. For example, an underwater sea monster may want a birthday present. Thanks to powers that are not fully explained, our hero is able to summon a birthday present and complete the task. 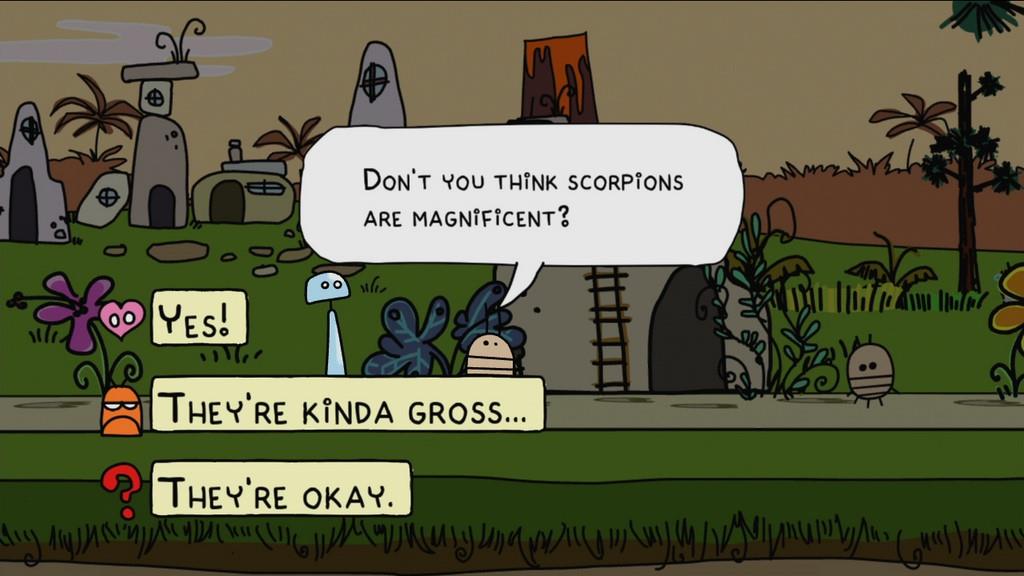 Many of these items are found by simply picking up the various houses and trees that adorn the planet. As it turns out, everything in Doki-Doki Planet can be picked up and flung about. That's because every element of the planet is paper-thin, not unlike PaRappa the Rapper and Paper Mario. Not all of the items QT3 picks up will be immediately important to the quests; some will come into play on different planets, or end up being completely useless.

Larger planets offer longer stories, often with more interesting outcomes. On Farroh, QT3 meets Cleo, who is heartbroken by the passing of her friend, Ramses. What she doesn't know is that the ghost of Ramses is still around, desperately trying to communicate. This sends the loveable robot on a quest to reunite these two. Before everything is said and done, QT3 will experience a ghostly possession, a religious ritual and the appearance of Death. All to get Cleo and Ramses back together again.

All of the stories in Doki-Doki Universe are designed to pull at your heartstrings and win you over by being adorable. And, for the most part, it works. I looked forward to visiting each new planet and getting to know its inhabitants. I was curious what piece of humanity QT3 would learn next, and how it would be explained. I was invested in this robot's journey, even though I wasn't sure how it would end.

Oh, and did I mention that the game has personality tests? For whatever reason, asteroids hold quizzes that will help determine what kind of robot you are. You'll answer multiple choice questions that often feel random, such as what kind of house you would want to live in, what kind of airplane you prefer and where you would rather go on vacation. After answering hundreds of questions, the game gets a good sense of who you are. In case you're wondering, I am extremely romantic, have extreme baby anxiety and am incredibly responsible. 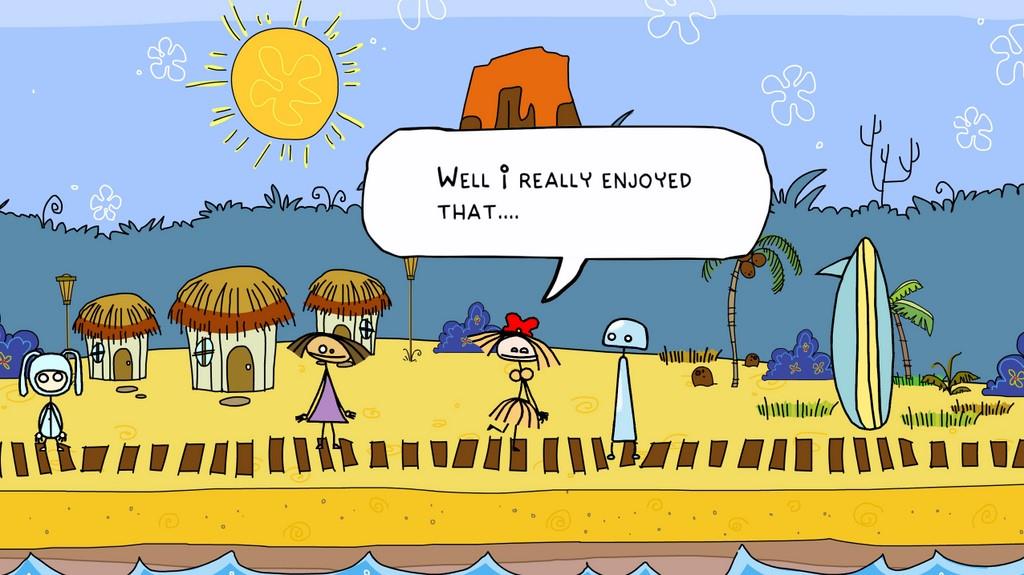 Despite being delightful, I found much of Doki-Doki Universe to be entirely too easy. Most quests can be completed  by simply searching for hidden presents, which takes less than a minute to accomplish. Rarely will you need to take items from planet to planet, making each section self-contained. And with no ways to die or end the game, I rarely felt any sort of urgency in my adventure.

In some ways it feels like Doki-Doki Universe squandered a great concept. By making the puzzles slightly more elaborate, the game would have been far more engrossing. There are more than a hundred characters, yet only a handful are developed in any significant way. Worse, some of the gameplay mechanics that are hinted at aren't fully developed. For example, the game stresses that players should greet each character with a bow, wave or kiss. Unfortunately, there's little reason to properly greet people, making that mechanic practically worthless.

Doki-Doki Universe often feels like it was designed for younger players. Beyond the simplistic structure, the game also features a social element that is accessible to all. On top of finding summon items; QT3 also discovers pieces that can be added to the home planet. This gives players some control over how the planet looks, complete with changeable backgrounds. You will also be able to explore planets your friends have created and send them Facebook messages full of Doki-Doki Universe animated clips. 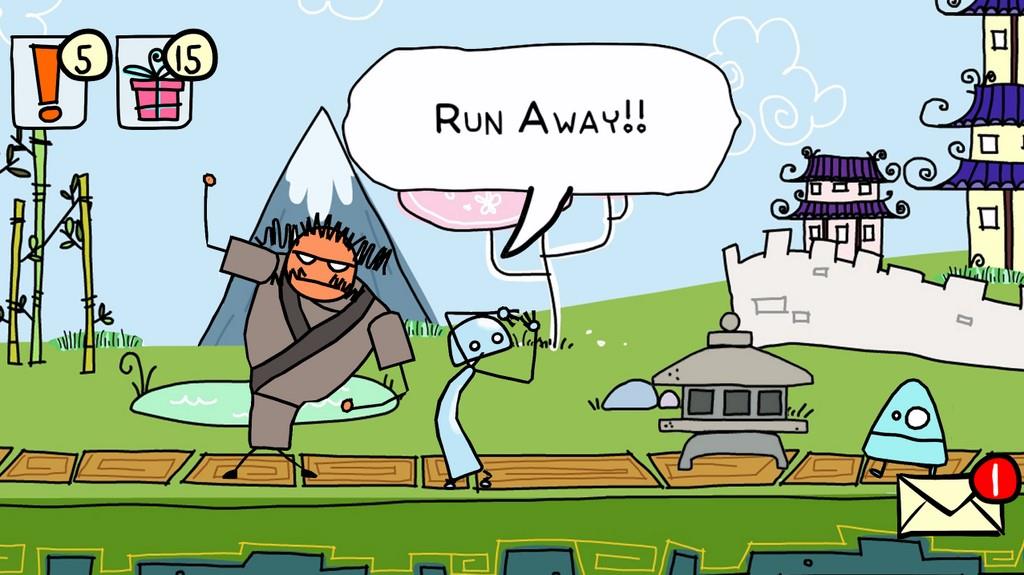 I think the game's simple look fits the gameplay. The visuals are clean and striking; it often looks like they were hand drawn as recently as this morning. There's never too much detail and rarely more than a few colors. The animation is also simple, usually offering no more than a few frames. But as simple as the look is, the game's heart and emotion shines through.

Doki-Doki Universe is a cross-buy title, so buying it for the PlayStation 4 will also give you access to the PlayStation 3 and PS Vita versions. Better yet, the game is cross-save, allowing you to effortlessly sync your saves with the cloud. This is done automatically, no matter which system you're playing on. Without even thinking about it, I was able to continue my PlayStation 4 save on the PS Vita. No manual nonsense required.

The game runs smoother on the PlayStation 4 than the PS Vita, though not enough to detract from the portable version. I was also surprised by the difference in load times, which seemed twice as long on the handheld version. On the other hand, the Vita's touch control makes choosing items much easier. No matter what platform you play it on, Doki-Doki Universe will warm your heart.

I admire a lot of what this game tries to do, especially when it comes to exploring humanity. QT3 is a likeable character who interacts with a strong cast of humans, animals, monsters and fellow robots. Sadly, Doki-Doki Universe is let down by its easy difficulty and simplistic gameplay. This is an adorable ride for kids, but I suspect many adults will grow tired of the structure long before it ends.

From the creator of ToeJam & Earl comes a game about a robot searching for humanity. Doki-Doki Universe has players flying through twenty different planets, all in hopes of finding what makes humans tick. Meet more than a hundred characters and solve missions in this quirk, though terribly shallow, adventure game for the PlayStation 4, PlayStation 3 and PS Vita!