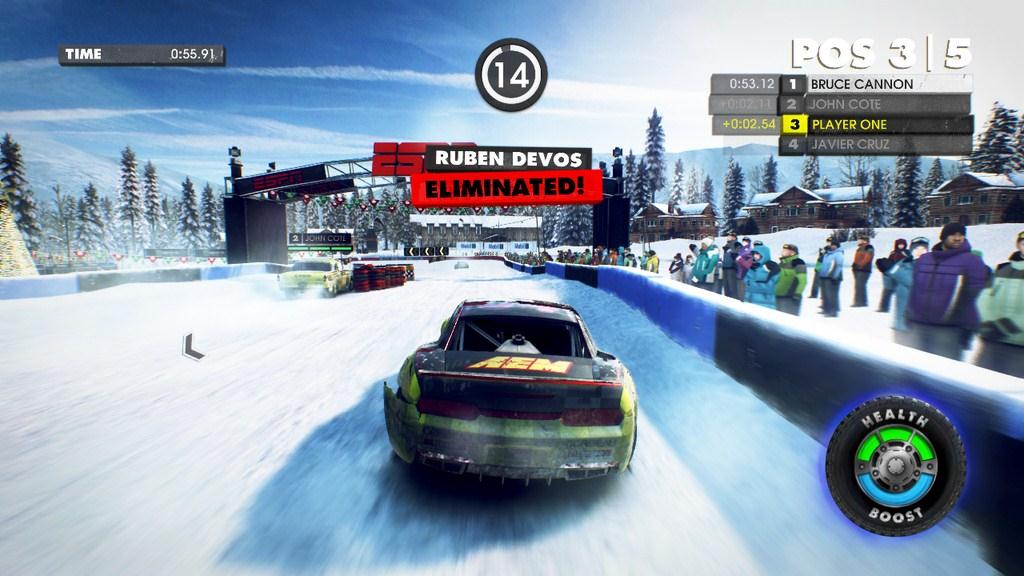 Written by Mike Mahardy on 7/12/2012 for 360
More On: DiRT Showdown
DiRT Showdown is a bold undertaking. Developer Codemasters has never exactly stuck to the norm when it comes to the racing genre, and their newest title is no different. While most racing games encourage player progress with a steady mix of new tracks and vehicles, Showdown uses the game modes themselves to add variety to the mix. The premise is solid, and it is executed well, but fatigue eventually sets in.

As soon as the main menu pops up on-screen, you’ll be prompted to sign up for Race Net, a social tracking service that spans all future Codemasters titles. After every single event in Tour mode, the option to challenge a friend will be offered. Bonuses such as in-game money and vehicles are dangled on a stick in front of the player, who will be rewarded merely for taking their racing online. Codemasters wants you to spread the word about this game, and they make no attempts to hide that fact.

For all of the annoying prodding, multiplayer does give a glimpse of the best aspects of the game. A few modes are exclusive to the online scene, including Smash and Grab. Essentially a new take on Halo’s Oddball, drivers must learn the course quickly if they want to accumulate points. The added unpredictability of human-controlled cars racing alongside you spices the sometimes-monotonous events up, seeing as how the single player modes are surprisingly easy.

The new physics engine in Showdown allows the player to acclimate quickly. In fact, I realized that I was over thinking the drift and donut controls of the gymkhana events. All it takes is the tap of a button, and the occasional flick of an analog stick, and it’s all smooth sailing from there. Although the simple controls do wonders to increase accessibility for players new to the racing genre in general, a lot more depth would have kept me on the edge of my seat at every turn. This much-needed shot in the arm is all the more apparent after about five hours into the single player game.

The first circuit of Tour mode is thrilling. Just when I though I had mastered one event, another would throw those rules out the window, forcing me to adapt. Demolition derby type events kept me tense as I avoided oncoming crashes, and trick-based sequences allowed me to master the somewhat easy controls of the gymkhana events. Traditional races require precise turning later in the single player game, while the collisons in demolition derby events increase in frequency as the AI becomes more accurate and cunning. The dirty maneuvers that are encouraged during races also became more pervasive, requiring the player to watch their back at all times. Although their is no cockpit view this time around, the game does a great job of immersing the driver with constant action everywhere you look. The stage is set for an enticing game, but the flaws soon become apparent. The problem with single player, multiplayer, the entire game really, is that it becomes boring after about six hours.

The game modes can only go so far when it comes to creating an engaging experience. It’s the lack of content that really disappoints. Halfway through the second difficulty tier of Tour mode, and I had experienced just about every track. That would be fine if there were only two tiers, but there aren’t; there are four. The dwindling roster of venues became even more apparent when it was clear that Codemasters simply implemented new time of day and weather effects to create a new aesthetic for the same exact tracks. Although the game is gorgeous as far as visuals go, the added snowfall doesn’t change the fact that I had completed the same exact race three times in a row. There isn’t a huge amount of vehicles to choose from either. Aside from a few late-game anomalies, you’ll probably end up sticking to the same few cars for each event type. 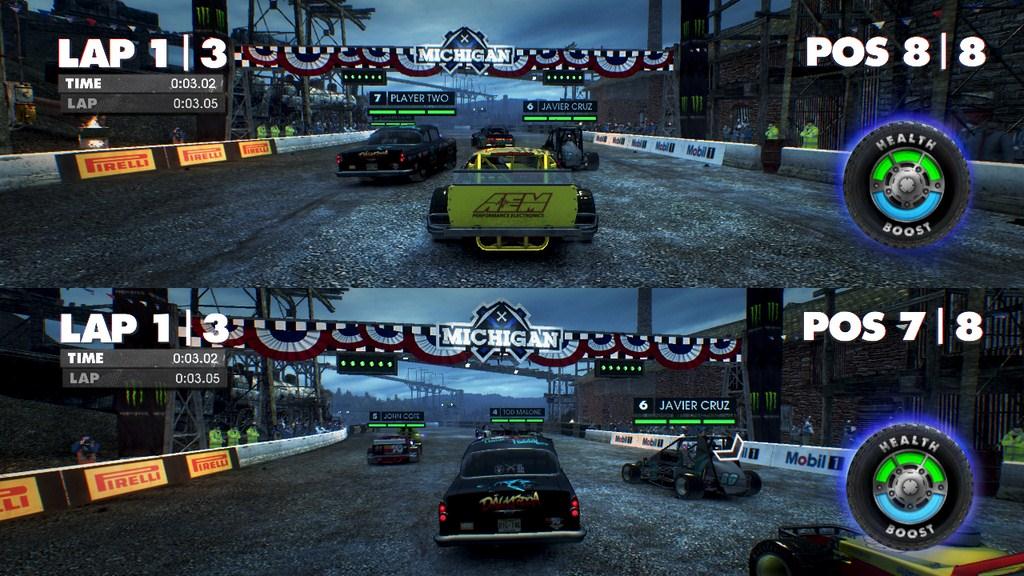 Again, the game looks great, much like Codemasters’ previous installments in the series. Flecks of dirt spray out from tires appropriately, and the lighting is dynamic enough to create a real sense of placement on the tracks and arenas. The minimal supply of venues all have their own unique appeal to them. Michigan's mud-covered track and varied elevations provide a breath of fresh air from the single-planed venues that fill out the rest of the game. The trademark slow-motion crash cams are always entertaining, although I found myself skipping out on this mechanic just to finish the banal events. Aside form a commentator who butchers the rock-heavy soundtrack and the English language in general, the presentation of Showdown left little to be desired.

Showdown is a much shallower game than DiRT 3. There are added event types, yes, but the overly accessible controls and a lack of new content becomes tedious not too long into the title. If Codemasters could have integrated their innovative take on the racing genre with traditional aspects like varied tracks and vehicles, the overall package wouldn’t have suffered as much. If you’re looking for short-lived thrills in place of extended enjoyment, DiRT Showdown won’t disappoint.
DiRT Showdown breaks new ground for the racing genre. New event types set it apart from other games in its field, but a lack of traditional aspects holds it back from extended player engagement. More tracks and vehicles would have provided a solid premise with the adrenaline rush it needs to maintain the excitement. The game modes don't prevent Showdown from becoming boring after only several hours in, so the thrills are short-lived.