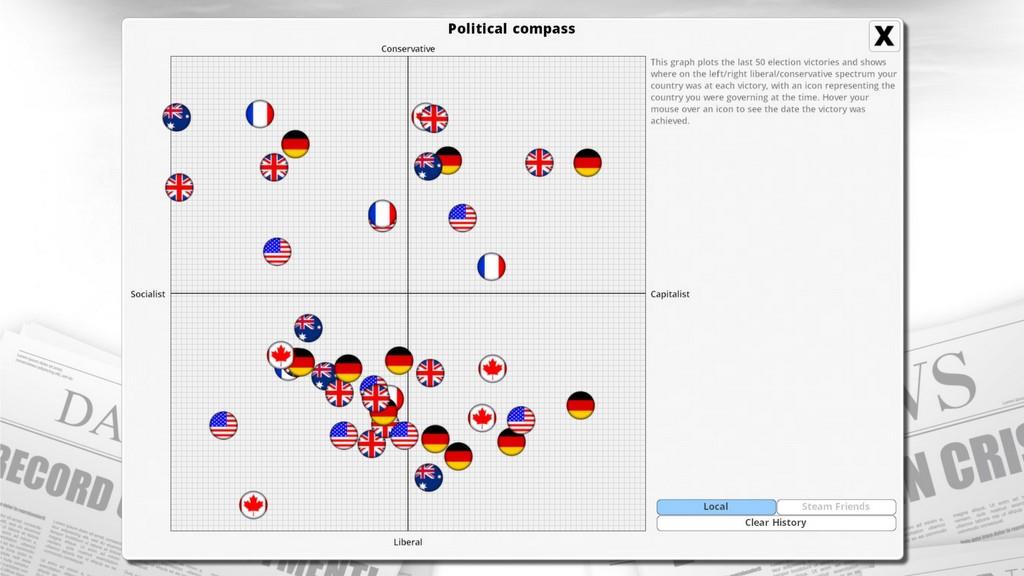 I always get a kick out of people that blame the President for current gas prices. It seems as if they visualize a big lever mounted to the wall of the Oval Office with which the current occupant can simply set new prices on a whim. Obviously (to thinking people, anyway) the situation is far more complex; those levers are actually located in the CEO’s offices in the major oil companies. But if you buy into the concept of a president having the ability to simply move levers around to adjust various facets of our political environment to better suit his (or her, someday) base constituency without any concern over getting laws passed by the legislative branch and wonder how well that would work out, there are two ways to find out. First, you could kick back for the next three years and see how this grand experiment of imperial edict via Executive Order turns out, or you could get yourself a copy of Democracy 3 and the newly released Social Engineering downloadable content from Positech Games.

Not being the patient sort, I chose the latter approach.

The experience went ... poorly. And by poorly, I mean that as President of the United States, I never had to worry much about being re-elected to a second term. Assassinations pretty much precluded that. Who knew left wingers were that violent? Oh, yeah. JFK. Duh.

As it turns out, I am pretty political (people that know me are now rolling their eyes and thinking “Pretty? You misspelled Extremely!”) and have strong opinions on what’s wrong with our country, and by extension, our society, today, and those feelings have a pretty hefty libertarian leaning. You know, as in “the only good government is a small government.” I’m a charter member of the MYOFB Party, in fact. If it were up to me, the Federal Government would do very little more than build paved interstate highways and fight defensive wars, along with a few sundry items like Air Traffic Control. The rest of the day-to-day minutia of governance would be handled at the state level. I see the Wickard v. Filburn Supreme Court decision as travesty of justice, and the preponderance of nanny-state, freedom-curtailing federal laws built upon that insane decision as the very genesis of the situation we find ourselves in today.

Why, if I were in charge ... well, I guess I already told you what would happen.

In my first look at Democracy 3, I found that the game, while relatively complex, was too straightforward. While presidential actions were limited in scope and scale by the availability of its measure of currency, Political Capital, it was still the case that the Executive had free rein over what policies were implemented and to what degree the policies were funded and enforced. There were no pitched battles with the Legislative Branch, nor was there any concern that the Judicial Branch would overrule the presidential edicts. Again, this obviously pre-dated the current Executive behavior we are seeing today, but it did serve to allow the player to test political theories without a lot of friction but with some measure of constraint. 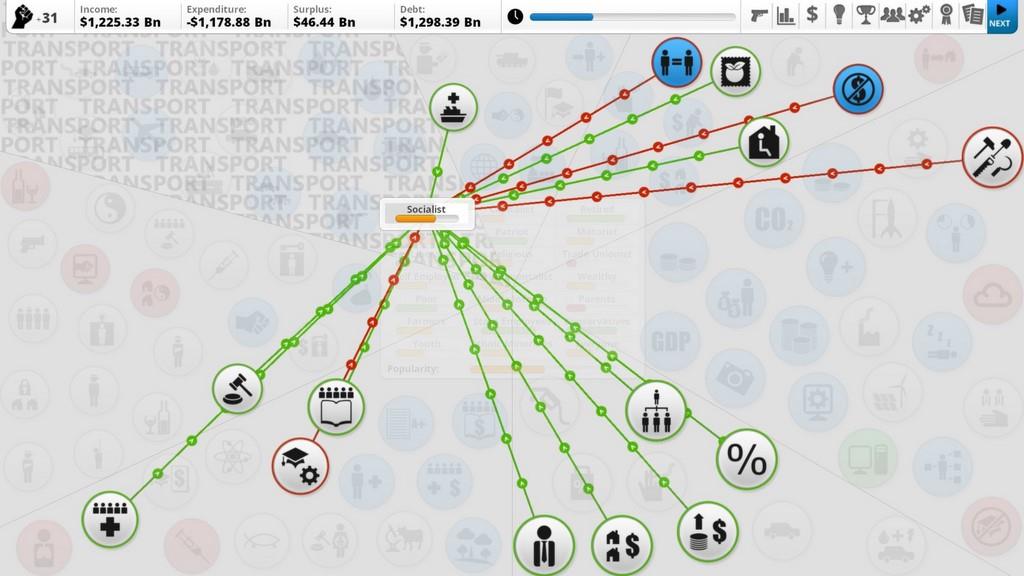 Also missing were the softer examples of nanny-government overreach that we see today in the form of “public service announcements” that urge us to eat healthier foods, stop smoking, wear seatbelts, and prevent forest fires. Not to mention flat out commercial advertisements for unpopular and non-functional products such as healthcare.gov, a product every bit as popular as New Coke.

The power of the government purse also comes with the power of providing financial subsidies that can be used to persuade citizens to behave in ways that the government deems “better” than the status quo. For example, if the government were to transfer wealth from middle class workers to upper class yuppies in the form of subsidies on high-end electric cars (which it does), the thinking is that there would eventually be a market shift away from useful things, such as half-ton pickups or family-hauling SUVs, to more appropriate (in the eyes of city dwellers) modes of transportation like hybrid Toyota sedans or pocket-sized “Smart” Cars.  The truly diehard dreamers still hold out hope for high-speed rail as a “cure” for independent travel between cities. Very, very few people actually want that, but when you are a government that can just print or take money, cost is no object — subsidize the building of the tracks, then stick the states with the ongoing costs. 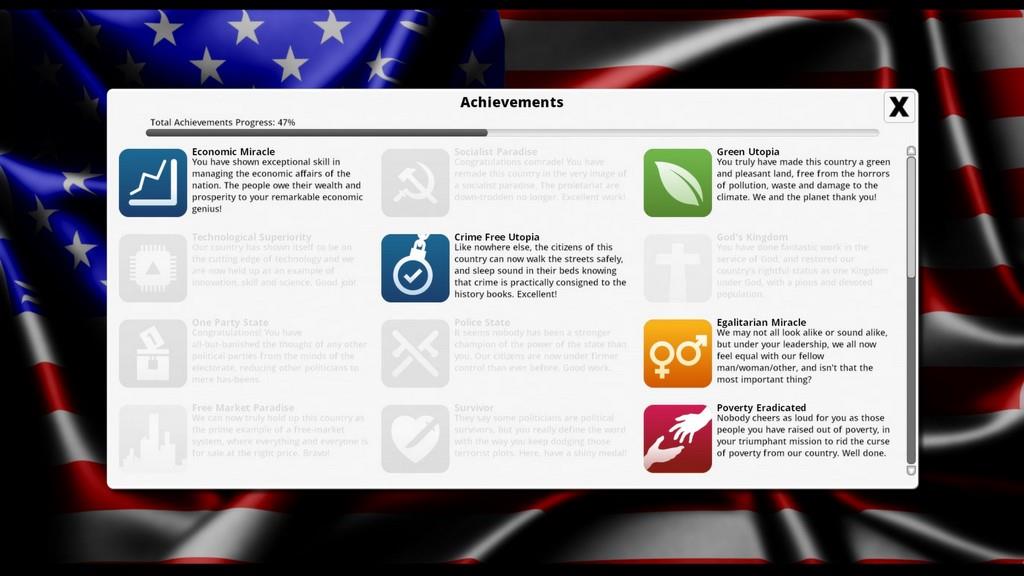 This is where the Social Engineering DLC comes in. It adds 26 policies to the already robust collection in the original game, and these policies address the softer side of governance. It was already the case that policy changes took anywhere from few to many turns to have their full effect, but the social engineering policies can not only take even longer, but also have very subtle net results. Think of it as nudge versus shove, with the social engineering policies being more on the nudge side. These new policies range from fairly mundane things like arts subsidies and healthy eating campaigns to nearly dictatorial policies like compulsory food labeling or banning shopping on Sundays.

Along with the new policies come a set of dilemmas that you may be faced with. You might have to decide whose face should be on new currency, or whether or not it is politically expedient to attend a Labor Day celebration. These may seem trivial, but as you can see in our current hyper-partisan political environment, every single thing, even a few dozen rounds of golf a year, will anger someone. The trick is, of course, deciding who you care about angering and who you don’t. Commensurate with that decision is attempting to gauge which groups are most likely to take out their anger with a high-power scoped rifle. Ask me how I know.

With the addition of the social engineering method of governance, Democracy 3 has taken one step closer to providing a fairly realistic simulation of how extremely complex it is to set policy in a country as large and diverse as ours is. Every move has tentacles of repercussion, and it can take quite awhile to gauge the success or failure of your policy decisions. While Democracy 3 does gloss over the complexities of dealing with a representative democracy in a number of ways, it still provides valuable insight into the machinations of government through a deep, challenging game.

The first glance at Democracy 3 can cause an immediate "it's too complicated" reaction, but the well-designed interface enables a fairly quick understanding of how to manage the policies required to create your own personal political utopia. For those that are into this kind of thing, Democracy 3 is a great way to test pet political theories in a (mostly) consequence-free way.