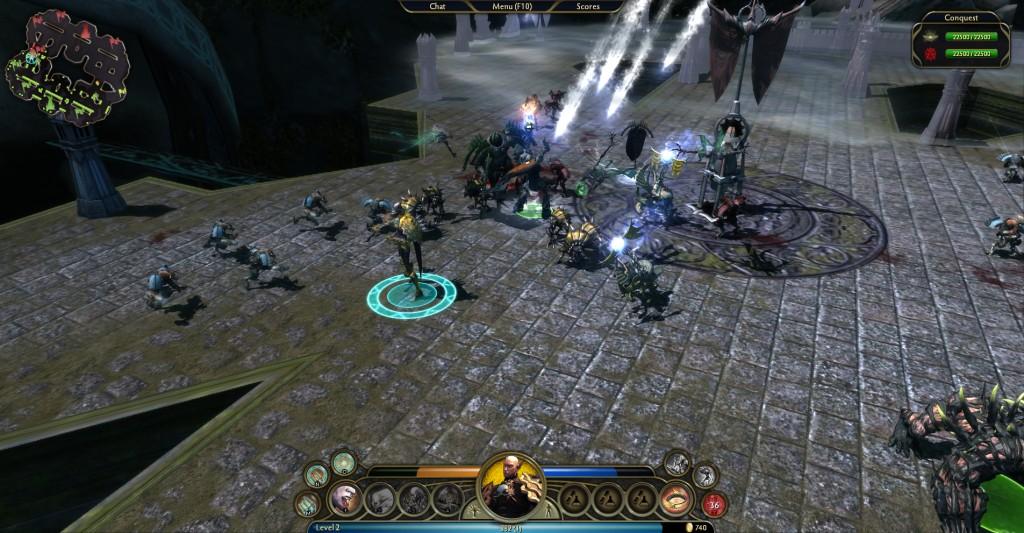 Written by Randy Kalista on 5/28/2009 for PC
More On: Demigod
Filling dad’s shoes has rarely been a more ambitious undertaking. Your role, as one of eight offspring of a fallen god, is to take your cast-down father’s place in the pantheon that sits on high. Your tools are honed, your mission is clear. And your resolve is not unlike Winston’s from the Ghostbusters when he tells Ray, “When someone asks you if you’re a god, you say ‘Yes!’”

With Gas Powered Games at the helm, and Stardock manning the publishing rudder, Demigod sails rarely-charted waters between real-time strategy and loot-hoarding role-playing games. It’s not a fully-recognizable RTS because you control only a single hero unit. It’s not a fully-recognizable RPG because, well, there’s no role to play beyond acting as a hammer against your foes. If nothing else, Demigod is a ripping good game of capture the flag, even if it’s nothing more than exactly that.

A never-ending stalemate between respawning grunts is waged across planar, fantastical fields. You, and up to four other will weigh in with weapons and crowd-controlling magic in order to tip the scales to your side’s favor. You acquire and maintain waypoints, you waylay the enemy’s defenses, and you tear down the other’s citadel -- the king pieces of these high-minded chessboards.

As is quickly becoming a calling card for games published under the Stardock banner, there’s no in-game tutorial, and only broad-sweeping instructions found inside the manual. It would be fair to assume that different players learn to play different games different ways. Some pour through manuals until cataracts begin to form. Some want a tutorial that will hold their hand the first time they cross the street. Others want nothing more than to be left alone to figure things out along the way. Demigod assumes that only that last type of learner exists. You get a pat on the bottom and a quick shove into the fracas. Good luck, kid -- now get outta here, you’re botherin’ me. There’s nothing wrong with learning by doing, but be prepared to wander about indefinitely with sizeable gaps in your gameplay knowledge.

There are four simple game types comprising Demigod. Conquest is the aforementioned citadel destroying objective, which can morph into protracted engagements culminating in frame-dragging climaxes. Dominate requires the control of all-important flags for certain amounts of time to secure a win from a spearheading enemy. Slaughter demands the counted deaths of other demigods. And Fortress demands the razing of several tank-built, arrow-spewing buildings across the map.

The most personal layer of strategy comes in the form of choosing a demigod to suit your play style. The eight demigods are divided into two camps: assassins and generals. The assassins -- which apparently suit my personal play style and elicit many a diabolical laugh out of me during matches -- are strong toe to toe contenders. They fight by themselves, for themselves, and they’re good at it. Generals -- a play style that escapes me, but I’ve seen done well online -- rely on buffing an ever-increasingly large cadre of minions that handle the bulk of the fighting for them. Aesthetic choices aside, you’d be hard-pressed not to find a particular demigod who’s style doesn’t strike your fancy. And maybe even a couple variant styles will suit you as well. Give me Regulus’s long-range crossbow or the Unclean Beast’s fast-moves and faster claws … and you might as well just start fanning me with palm leaves and feeding me grapes: the pantheon is mine.

Clicking up the difficulty level allows for more intelligent moves by the AI, without the bots resorting to ‘cheating behind the dungeon master’s screen’ with inexplicably higher hit points or distorted attack damage. Rather, they move with greater unison across the map, focus heavily on the ins and outs of the match’s goals, make smart magic item purchases at the item and artifact shops, and seem more knowledgeable about their personal limits. All good lessons to pick up and play with for a game lacking in general instruction. 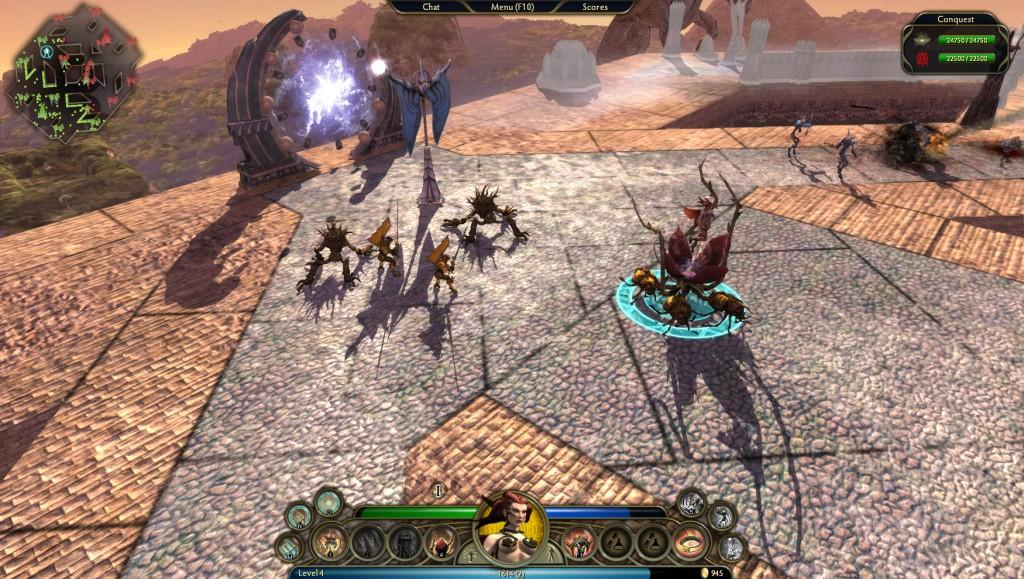 The troubles Stardock has had with hosting multiplayer matches over the internet are well-documented. But Stardock isn’t without apology (the most recent being in the form of 50% off coupons for the purchase of a second game of Demigod for a buddy). And the manual does divulge that, if Stardock’s support channels can’t solve your problem, they’ll refund your money. It’s afforded Demigod a blazing amount of community support, despite the difficulties of making a connection on tournament-ranked matches (I’ve personally only connected on two or three out of ten tries without getting crashed to desktop or stuck in pre-match limbo).

The gameplay itself is only hitched with minor ailments. Navigating a demigod around curves can be a hurky-jerky process, and sometimes on pointy-edged turns as well. While the soaringly-gorgeous maps rank high in imagination, the gates, towers, and fortresses themselves are of a very dull architecture. The monolithic Rook character (the walking castle that’s served as Demigod’s poster boy) is big enough that even dutifully outlined enemies can get lost behind his bulk.

But one of Demigod’s strange lures is that it’s entirely more fun to play than to talk about. Its concept is simple and its purpose is rote. But its cast is engaging and combat makes every moment of ten- to twenty-minute engagements line up the adrenaline shots. It’s not the Team Fortress 2 for the RPG set, but with a drip-feed of more maps to stomp on and more demigods stepping forward, Demigod will have legs that carry it into ‘honorable mention’ territory come year-end awards time.
Demigod has laser-focused gameplay that reaches for new ground without overreaching its ability. It indeed taps into a certain wavelength of the grind-loot-level of RPGs, but is stripped of all extraneous contraptions and forced dialogues. In terms of multiplayer gameplay alone, Demigod is a tough act to follow.