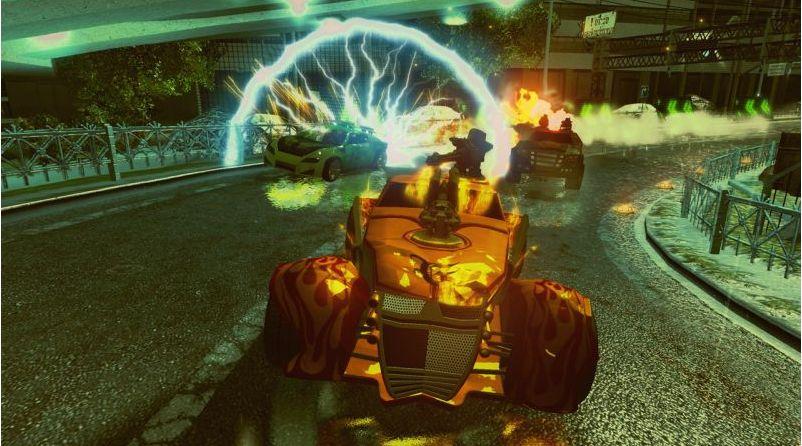 Written by Dave Gamble on 5/5/2009 for
More On: Death Track: Resurrection
Probably the first console-based video game that I was able to play with my daughter was Crash Team Racing on the PlayStation. She couldn’t have cared less about Crash Bandicoot or the other characters; this was long before she learned how to follow fads. She eventually succumbed to the inexplicable appeal of Pokemon, NeoPets, and whatever independent-thought sapping marketing blitz came along. No, she couldn’t have cared less about Crash Team Racing being a naked (well, she would have said “nakey” – we went through the Rugrats phase too) plagiarism of Mario Kart. We were a Sony family; she knew nothing of Mario and his cohorts. No, the appeal to her was not the characters and their antics. The appeal was that she could beat up on Dad.

At first, or course, she had a lot of difficulty controlling the karts, so she wasn’t really competitive in the actual racing. She learned quickly, though, that she could pick up missiles that she could fire off whenever she wanted and they would track me down and blow me to smithereens. There was little that I could do in response. When you were in the lead, you didn’t get (or need) offensive weapons. Rather, I picked up mines that I could drop behind my kart and hope that she would run into them. Unfortunately for me, that tactic didn’t work. For some reason, my daughter didn’t inherit the gene that my wife and I both have that ensures that we can’t seem to avoid running over things in the road. Consider this: between the two of us, we have had three tires ruined with road hazard damage in the last year. With her preternatural ability to avoid the traps I left for her to run into, there was no one left in the race to run into them. Except, of course, me. Which I did, and which she found to be outrageously funny. 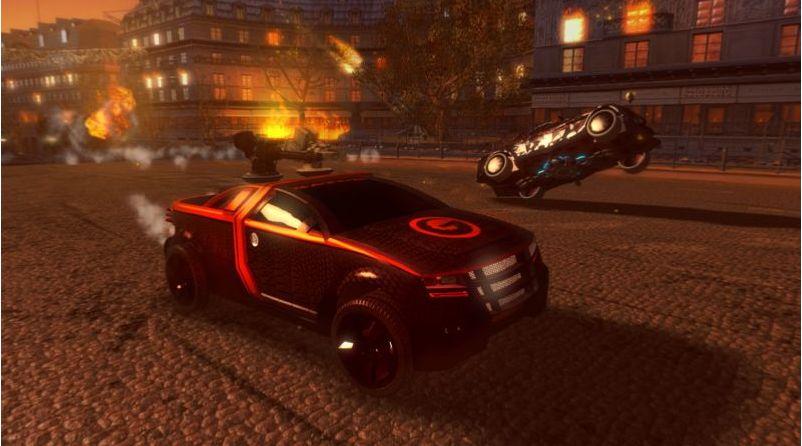 It was with fond memories of our time playing the cute and fun Crash Team Racing that I approached 1C’s Death Track Resurrection for the PC. Now don’t get me wrong – I knew right up front that this was not going to be anything like the kid-friendly game I remembered. I figured that there would be no go karts driven by clever foxes in this game. I imagined that these would be full size, heavily armed cars racing for their very survival. This would be take-no-prisoners, fight-to-the-death mayhem. And, as it turns out, that’s exactly what it turned out to be. Not that there’s anything wrong with that, as they say.

The premise, as thin as it is, has to do with a post-apocalyptic (and really, isn’t the post-apocalyptic genre the new WWII as far as market flooding goes?) world in which traditional sports have been replaced with highly dangerous and violent death races. The benefits of this are obvious as most of the drivers don’t live long enough to demand hugely remunerative contracts or get themselves into legal trouble as so often happens with, say, the NBA. I suppose a game needs to define a premise for some reason, but in this case I remain unclear as to why. While there are cut scenes between races that are intended to move the story line along as you go from race to race, I would say without undue risk of anyone disagreeing with me that you can safely ignore all of that and simply concentrate on the racing. 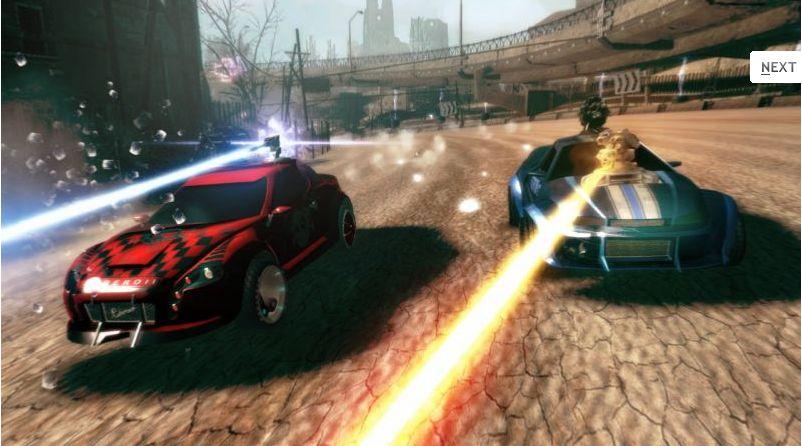 The first critical thing to know about this game is that although it is for the PC, it has all of the hallmarks of being almost a direct port from the consoles. First and foremost, this means that your nice Wheel/Pedal/Force Feedback controllers will not work. I tried repeatedly to get the joystick routines to behave as they should with my steering wheel, but to no avail. I ultimately was forced to use my console-like USB controller. That’s unfortunate because the racing itself really suffers when you have to use a thumb stick to steer. On the plus side, the console-like controller has a lot of buttons within easy reach, and that comes in handy for managing and firing weapons. Still, I personally believe that the bar should be set higher for the PC version of any game. It takes a pretty hefty PC to support the graphics of games like these, and PC gamers with hefty PCs are very likely to also own suitable controllers.The races themselves are staged in universally recognized cities from around the world. You will race in Paris, New York, Tokyo, and seven others, up to and including (oddly enough) Vatican City. The Pope was not available for comment. Normally you would enjoy driving around these cities sight-seeing, but there will be no time for that. From the moment the race starts, your attention will of a necessity be focused almost entirely on staying alive and/or making sure that no one else does. Now, having myself driven in Paris, the aspect of driving around blowing the berets off of rude drivers is a form of wish fulfillment. But aside from that, you really can’t spend a lot of time thinking about tourism. It’s a shame, in a way, because what I have seen of the landscape as I drive through it is pretty interesting. Keep in mind the whole post-apocalyptic thing, though. The cities are pretty torn up, and there are a lot of guns firing into the air and other incendiary events occurring quite frequently. 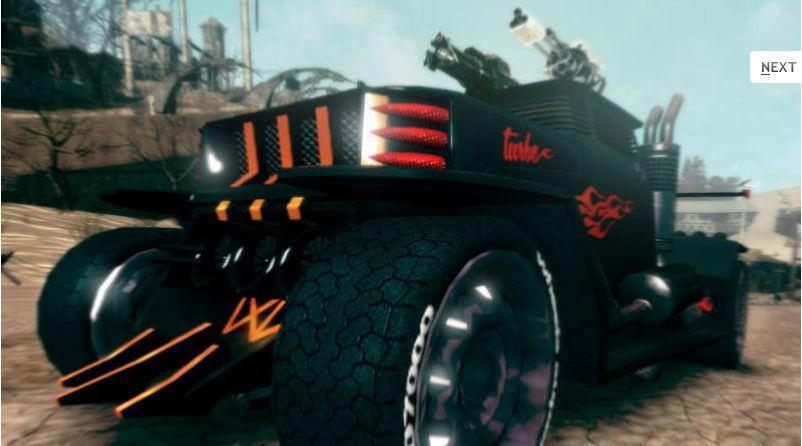 The race course is not a single path, and it sometimes behooves a driver to look for side streets and short cuts. There are enough turns and a high enough sense of speed to make driving with the thumb stick controller a bit of a chore, but with practice it becomes possible to make it through a lap without impacting roadside objects. That helps, of course, because there is already far more than enough of a risk to your health provided by the other racers firing weapons at you, and extraneous “enemies” trying to take you out from oddities like futuristic hovercraft only exacerbate the danger. There are power-ups and weapon-reloads to be picked up from incongruous floating symbols on the track, but they can be hard to retrieve at times as they move around on the track and the thumb sticks are too imprecise to allow you to make the subtle corrections required to retrieve them. All in all, the entire experience is like a Halo 2 version of Mario Kart. It’s very, very frantic. And, just as it was with Crash Team Racing, it is a very good strategy to not put yourself in the lead of the race until just before the finish. Everyone shoots at the lead dog; sometimes it is better to just follow for awhile.

Oddly enough, there is no multiplayer available. Your only opponents will be the computer-driven cars. That’s kind of a bummer, but in at least one way it’s a benefit: one of the things I remember about playing Crash Team Racing with my young daughter was that we had to have a special set of rules: she could shoot at me with whatever she could find, but I could only play defensively. She grew out of it eventually, but when she was very young she would cry if I hit her with a missile. And if you remember nothing else of what I say, remember this: there is no crying in Death Track.
Death Track Resurrection is one of those PC games that would be better on a console. If you want a PlayStation-esque gaming experience on your PC, by all means give it a try. Otherwise, not so much.