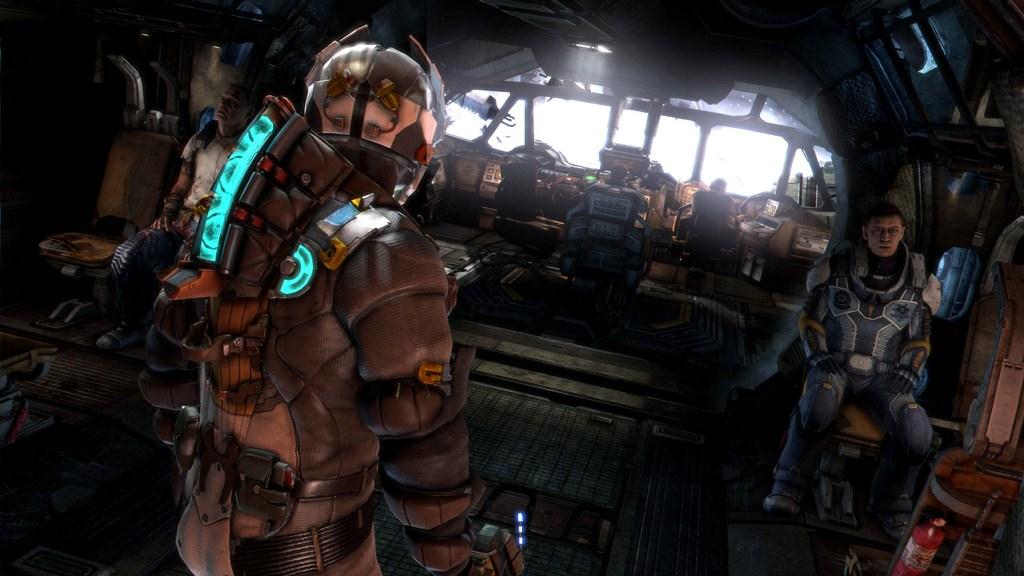 Written by Mike Mahardy on 2/5/2013 for 360
More On: Dead Space 3
Minutes into Dead Space 3, you’re traveling through a violent snowstorm. The scene is eerily familiar. Blinding ice and whipping winds give rise to the feelings of suffocation that have become ubiquitous in the Dead Space franchise. Progress a little farther though, and the winds clear, leaving you staring for miles over a foreign land that somehow makes the endless vacuum of space seem small; it’s a sign of things to come.

Dead Space 3 is bigger, longer, and more expansive than its predecessors. It’s Visceral Games’ magnum opus and it’s the best Dead Space yet.

Following his internal struggles aboard the Sprawl in Dead Space 2, Isaac Clarke is finally on the offensive, investigating a flotilla of starships and landing planet side in an attempt to quell the necromorph threat of the Markers once and for all. Tau Volantis, the setting for most of the game, is home to an incredible variety of locales, enemies, and tangential stories that supplement the overarching plot. 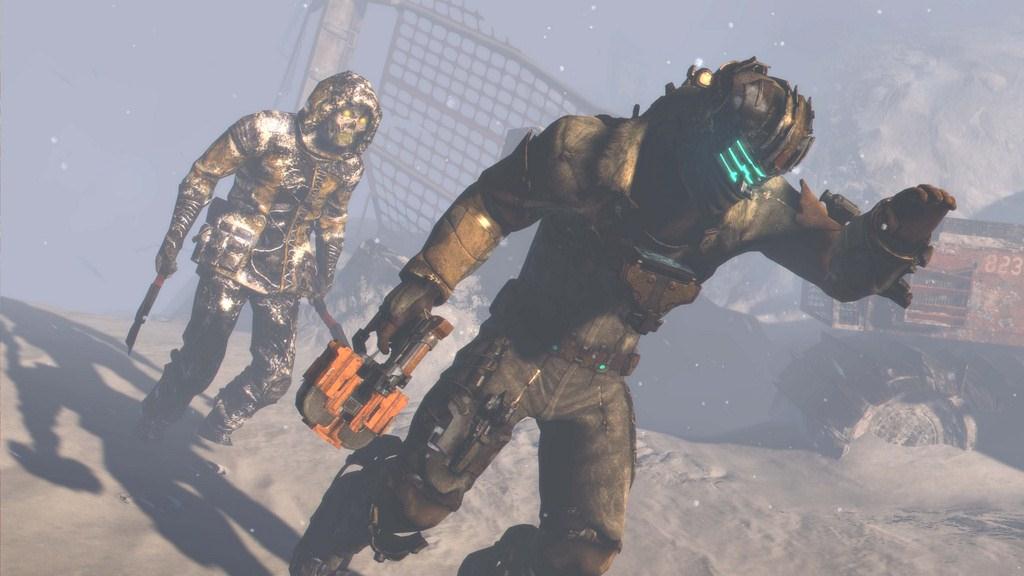 The wide expanses of the ice planet don’t remove the scares survival horror fans are expecting from Visceral Games; they create new opportunities to do so. The sound design that makes you shake every time you hear a distant bump is at its best when wind is whipping through your speakers, masking the footsteps of an approaching monstrosity. Tiptoeing through frozen corridors is terrifying, as the simple crack of an icicle makes your trigger finger jump.

For the first time, you can wander off the beaten path on optional missions. These are, by and large, the most well crafted sections of Dead Space 3. They offer self-contained stories tied to the environment in the most immersive ways. One particularly unsettling mission contains logs mentioning a star struck soldier as he works for his place among an elite group of fighters, 200 years ago. The logs don’t detail the aftermath of the soldier’s hazing, but the bloody walls and shattered bunk beds in the present day do.

These grisly chapters use narrow confines and dark rooms to get their point across; think of them as miniature Dead Space 1’s. Aside from one case where the level design was lifted wholesale and transposed onto another mission, these ancillary episodes are worth every minute. 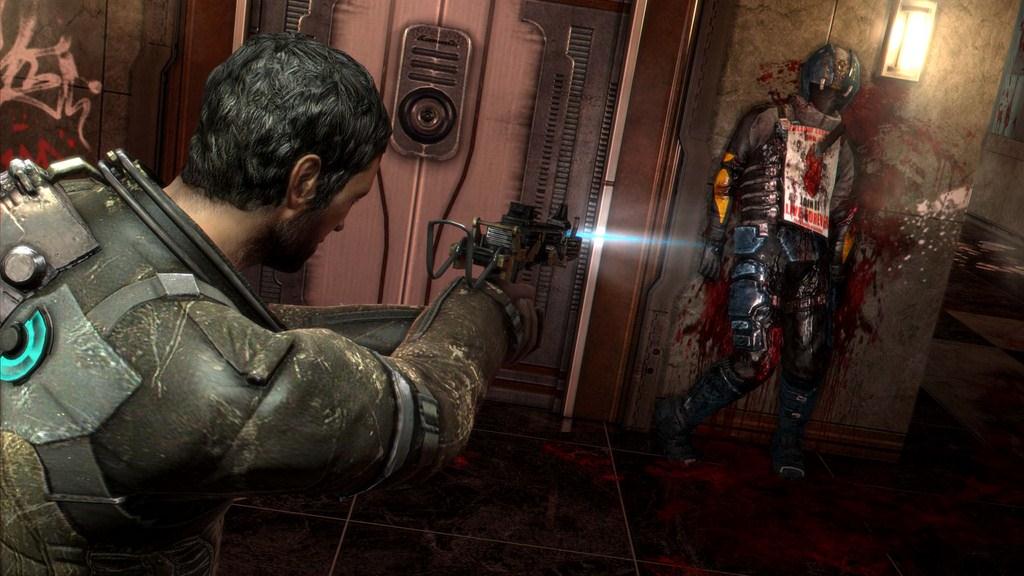 Tau Volantis’ varied environments serve not only to change up the scares, but many aspects of the gameplay as well. Maintaining Isaac’s body temperature upon arrival makes the planet an enemy in itself. It’s one thing to cut the limbs off of a hobbling Exploder necromorph, but the added necessity of a heat source before Isaac freezes to death makes every moment a tense bid to push onward.

Dead Space 3 tends to fall back on the “Oh god, what’s about to come out of that vent on the wall?” trick a few ten too many times. In spite of its size though, this can be forgotten in minutes as an unprecedented scenario makes you change tactics completely.

The enemy variety is even greater this time around too, with darting Twitchers demanding that you use your precious stasis ability, freezing them in their tracks so you can work your surgeon’s magic on their appendages. Leading the alien pack is the snow beast, a hulking, persistent threat that makes you think twice before you enter any wide-open areas.

The most offbeat additions to the enemy ranks, however, are humans. Expectedly, they function mainly as a ranged threat, firing rifles or rocket launchers, at their most dangerous moments. They’re cannon fodder, and don’t present anything numerous shooters haven’t already, but they alleviate the extremely rare monotony of severing necromorph limbs.

Facilitating the gunplay is the new weapon-crafting system. Whereas power nodes were previously used to upgrade specific weapon stats, Dead Space 3 lets you build any number of weapons from the ground up. Most weapon foundations can sport two tools –– essentially primary and alternate firing modes –– and a tip that modifies each. Throw in two more weapon-modifying attachments and the number of possible combinations is almost absurd; every new, seemingly trivial weapon part changes things dramatically. My personal favorite is a ground diffractor combined with an acid bath shotgun. If enemies get too close, my “ground-pound” attack sends them flying, only to be eliminated by a hail of acidic shotgun rounds.

Finding weapon parts is easy; crafting them yourself takes a little more time. The new resource management uses a basic currency system where several supplies are used to make weapon parts, med packs, ammo clips, and stasis modules. Helping you with this task are scavenger bots, deceivingly simple tools that became game changers once figured out. Using built-in radars, you can find hidden resource deposits that the bots will happily scour for you, bringing everything they find to the next tool bench you use. Exploring the environments nets you these vital ingredients, allowing you to build the weapons necessary for surviving every run-in with the necromorph horde. 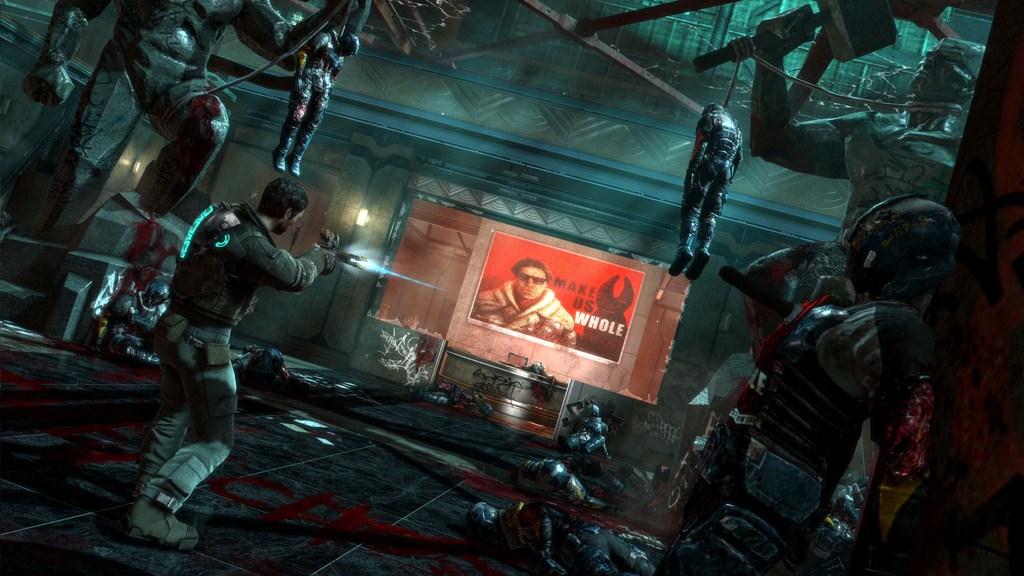 The story took me about 20 hours to complete, making it longer than both of the earlier installments combined. It doesn’t feel this long, though. Dead Space 3 lives up to the series’ reputation for pitch perfect pacing. There are a few late-game chapters beleaguered with backtracking and mind-numbing puzzles, but the slow tempo is a welcome respite following the events of previous chapters.

The pacing is helped in no small part by a narrative that serves as a case study in how to wrap up a trilogy. Questions that have abounded since Visceral began Isaac’s adventure are answered in grand fashion, bringing clarity to the mystery of the necromorphs’ spread. Text logs and audio recordings supplement the plot, offering insight into characters that faced the same threat centuries ago. In fact, one of the more endearing characters is present only through these collectibles, a scientist that serves as a cornerstone in the Dead Space chronology.

Isaac’s supporting cast isn’t always so compelling. Newcomer John Carver is a battle hardened, macho soldier whose sole focus is the mission. It’s an archetype that balances out Isaac’s affectionate aims, but constant flip-flopping makes it hard to gauge what Visceral was aiming for with his story arc. As the narrative plays out, he becomes a walking MacGuffin capable of just about anything. It’s a shame, too, because there are plenty of chances to nail his story with optional cooperative missions. 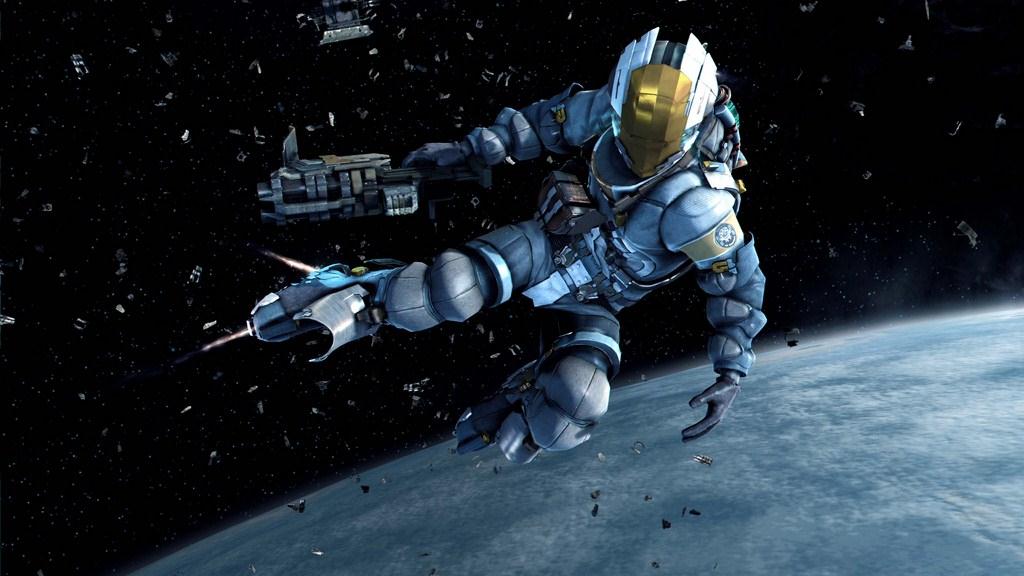 It’s easy to see how the new co-op mode might detract from the classic Dead Space experience; the series is known for psychological scares and moment-to-moment thrills, much of which could be alleviated with someone else by Isaac’s side. Rest assured though, the co-op in no way hinders the atmosphere of Dead Space 3. In fact, you would be forgiven if you didn’t even realize there was a cooperative option. Carver is absent for most of the solo playthrough, and puzzles adjust accordingly to the number of players.

Should you choose to play with Carver at your side, a whole new experience emerges. The game becomes more tactical with a partner, instead leaning on item-sharing and weapon-type coordination to overcome skirmishes –– each of which increase in difficulty with the addition of another player. Crafting new weapons to aid your teammate and watching their back while they reload is implemented so well that it’s a wonder Visceral waited this long to try it out.

What’s so great about this experience is how seamlessly it adjusts to the circumstances. The inventory is persistent, which means you can use the same crafted weapons in your solo playthrough as you do in co-op, provided you’re in the same save file. Pick up a weapon part in one game and join a friend’s game after saving, and you’ll still have that plasma tool.  If you begin a chapter cooperatively as Carver, you’ll become Isaac, complete with your personal inventory, as soon as your partner jumps ship.

Adding a cooperative mode to a franchise all about isolation is a bold move by Visceral, but the seamless integration of John Carver’s presence is further proof that the studio isn’t a one-trick pony.
Dead Space 3 capitalizes on everything that made its predecessors great, and expertly executes everything new. It has the psychological scares and claustrophobic environments of the first two games, but proves they aren’t the only ingredients for a tense experience, adding vast expanses that alter both the mood and gameplay. The whole experience blends a plethora of disparate parts into one cohesive whole that ends the trilogy as well as anyone could expect from Visceral Games. It’s been a long, harrowing journey for Isaac Clarke, and I’m glad to have seen him through it, and eager to trek it again.