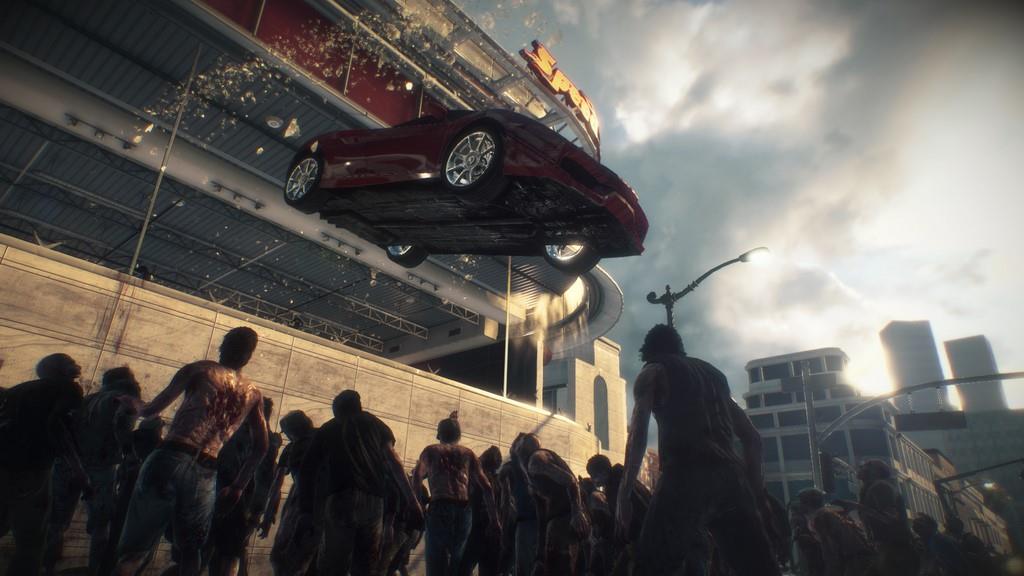 As I mentioned in my top 10 games of the last generation, the original Dead Rising was the reason that I bought and Xbox 360. It was the zombie game that I had been waiting for. Being able to run around a shopping mall, killing hundreds of zombies in various ways was some of the most fun I’ve ever had as a gamer. Here we are years later and Dead Rising has once again got me to purchase a next gen console. Once again I am having some of the most fun I have had in my life as a gamer but there are minor issues and a small sense of déjà vu that keeps Dead Rising 3 from being perfect.

Dead Rising 3 tells the story of Nick Ramos, a young mechanic who spends most of his time putting together wacky combinations of weapons to fight off the zombie hoard while trying to uncover the secrets of the zombie outbreak. Oh and the military is going to bomb the entire city in a few days. Needless to say, he's having a pretty bad week. The story plays out like other Dead Rising installments where you can do anything you want, but you need to keep the time in mind. Spend too much time screwing around, which is incredibly easy to do in these games, and you won’t have enough time to finish the main story. The good thing about this game as compared to the others is that you can save whenever you want so you don’t need to go rushing to a bathroom or safe room to avoid losing your progress. For those who liked the challenge of the original games, you can opt to play Nightmare Mode which follows the same structure as the original games. You can only save in safe rooms and if you die you lose all your progress since your last save.

The story is good for what it is but I’m going to assume that isn’t what most people play Dead Rising games for. They play for the zombie killing, and there are plenty of zombies to kill. It blew my mind the first time I saw just how many zombies on screen there could be at once. I ran through a crashed plane, stood at the edge watched in awe as hundreds, maybe a thousand zombies stood before me, waiting to rip and tear every inch of flesh from my body. It’s moments like this where I have to take a moment and appreciate what I am witnessing. I felt like I was looking into the future. I felt like I was seeing the first huge advancement in gaming technology that made me realize what we are going to be in for this generation. Those zombies aren’t just there for show as there are hundreds of weapons at your disposal you can use to commit zombie genocide. From bone saws, scissors, machetes, baseball bats, axes, knives, broom handles, fireworks, firearms, traffic cones, and I could go on and on all day long. Needless to say, there is plenty to keep you busy. There is just something so fun about watching that “zombies killed” counter get higher and higher. I often found myself losing track of time as I sliced and diced zombies over and over again. Kill enough zombies all while completing quests allows you to level up like previous games as well. You can spend your skill point on new abilities and buffs such as being able to deal more melee damage or to be able to hold more items in your inventory. I recommend maxing out your inventory slots as much as you can. You'll need them.

Returning from Dead Rising 2 is the various ways you can combine the weapons together for even more fun. Thankfully this time around you don't need to rush to a safe room in order to combine weapons. You will find numerous blue prints around the city that will allow you to take two weapons and combine them together on the fly to create new super weapons. The game also adds two new combinations to the game as you can combine various food items to earn boosts such as the ability to spit fire, speed bursts, invulnerability, and invisibility to zombies. Finally you can combine vehicles together to mow down zombies and watch that zombie counter get higher and higher. One of the biggest changes to weapons in Dead Rising 3 is that they don’t last as long as they did in the previous games. You may pick up a machete or put together a katana sword attached to a leaf rake and before you know it, the weapon breaks and you have to scramble to find something new. This doesn’t ruin the experience since you will almost always be able to find some kind of weapon anywhere on the map. 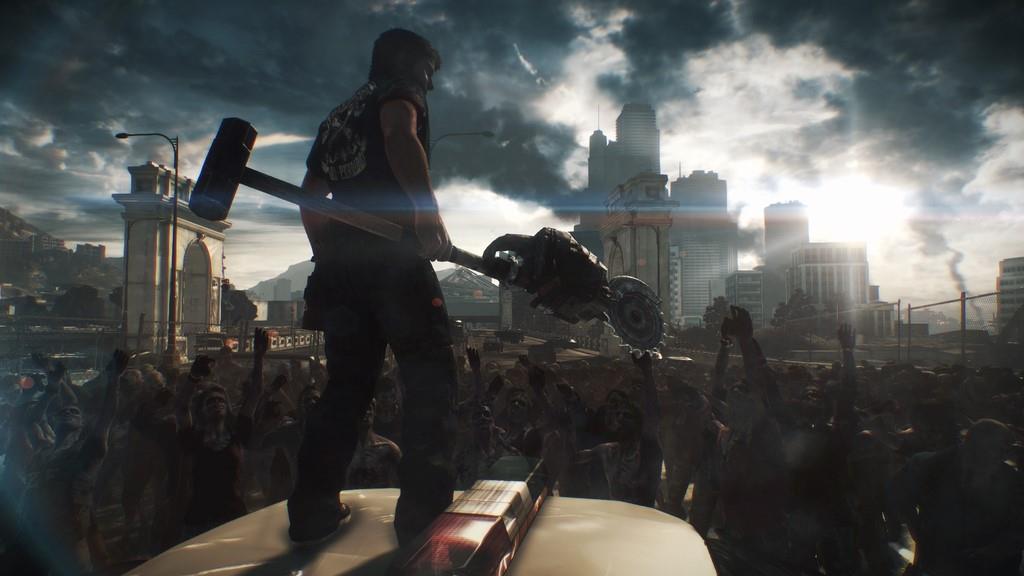 I mentioned before that I got a sense of déjà vu when playing the game. Bottom line, it still feels like the Dead Rising you have been playing for years. It’s still annoying to have to position yourself in just the right way to pick up an item, crazy and cheap psychopaths to kill and there are still survivors around the map with shoddy AI for you to save. This time around you can select a survivor you have saved at a safe house and bring them with you. They are typically able to handle themselves but they do get in the way by blocking doorways, or getting stuck when you start climbing things. They don’t take any friendly fire damage, which is good because when you need to save them from a swarm of zombies, you’ll often knock them down in the process. Mostly, I brought them along as bait for zombies so I can by myself enough time to scavenge for supplies or weapons. If you want someone to join you in the zombie apocalypse, I recommend a co-op friend. The game features drop in and out co-op and murdering tons of zombies with a real friend is more fun than an AI partner.

Speaking of the map, I find that it’s probably my biggest flaw with the game. The map offers little to no help at all when it comes to collectables, missions, side quests or events. Like most open world games, various things to collect and do in the world appear as blips on the map. The problem is that the map won’t tell you if the things you are looking for are above you or below you. I go into a building looking for a blue print for a new weapon mod. The map shows the inside of the building and the blip for the blue print in in the corner. I search this room for about 5 minutes and cannot find the it anywhere. It’s only after I ran up to the rooftop to escape a hoard of zombies that I actually found it. The map itself is pretty small as well so you will get familiar with Los Perdidos rather quick. It doesn’t take too long to get around the map in a vehicle which is probably why there are so many road blocks. Luckily this means when traveling by foot you won’t have too far to travel. 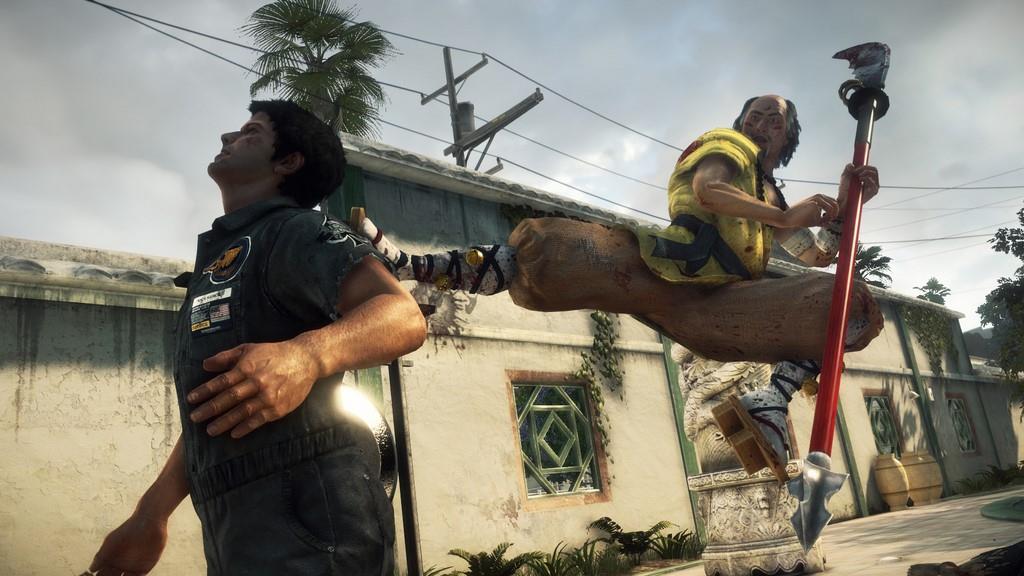 Now, I know there has been one issue that has been quite the topic of discussion around the internet regarding this game and that is the fame rate. I will say that unfortunately the frame rate does drop at certain parts but the good news is that it never drops to a point that it makes the game unplayable. I was expecting the game to come to a crawl but when the frame rate does drop, it’s usually when something huge is happening like a hundred zombies being blown to bits by a super bomb or when you now down tons of them in a vehicles. Maybe I am just so used to how games on the last generation of consoles looked and played but I honestly didn’t find the stuttering to be that invasive. When it does, it drops and recovers quickly so you don’t have to worry about the game chugging along like the little engine that could trying to make it up the hill. I did have some pop in issues as well which mostly occured when I was driving. The environments look nice for the most part but I wouldn't say this is the best looking game on the Xbox One.

When it comes down to it, Dead Rising 3 is a great launch title for the Xbox One that fans of the series and newcomers should consider picking up. Killing zombies has never been more fun and with multiple endings, nightmare mode, and tons of unlockables, there is plenty of reason to keep coming back to the game after you have beaten it. If that isn't enough, there will be four additional story episodes that will be added later as downloadable content so the zombie killing will continue well into 2014.

Dead Rising 3 provides plenty of zombie killing fun and is a great game to pick up if you bought an Xbox One. Newcomers to the series will find an incredibly fun game with tons of replay value and co-op fun. Returning fans will find the same thing but may be turned off a bit due to the fact that the core game hasn't really changed all that much.  My opinion as a huge fan of the Dead Rising games? Don't fix what isn't broken.