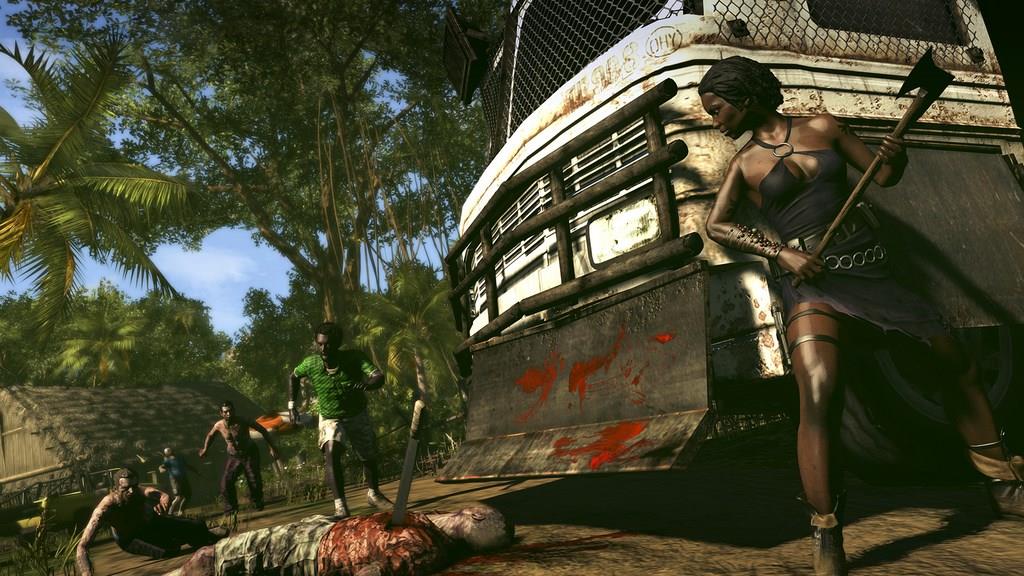 Not stories of a zombie virus infecting a string of tropical islands, but recollections of self-contained skirmishes inside abandoned bungalows. Not stories of dynamic character arcs, but tales of dire situations quickly turned triumphant because of a partner skilled with electrified wrenches.

The memorable encounters contained within Dead Island Riptide are all the more precious because of the forgettable events surrounding them. After hours of slashing through hungry cannibals and looting trash cans the plot, and the characters and objectives therein, seem as important as the zombie gunk under my boots.

Instead of a complex story brimming with novelty, the main objective is always simple: survive. Everything else is just superfluous chatter erupting from characters more boring than the last Walker to stand in my way. 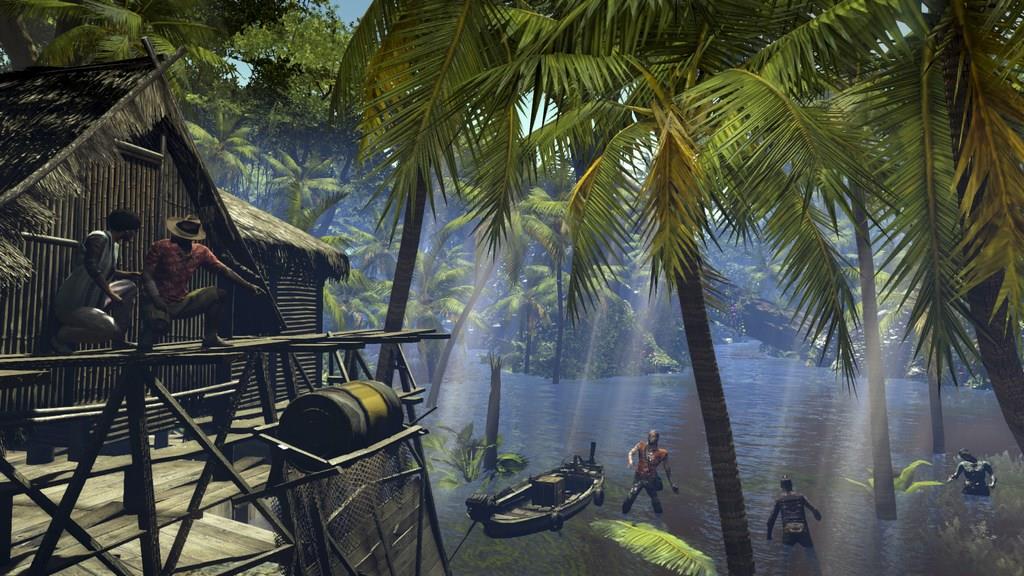 Riptide’s moment-to-moment gameplay is therefore placed on a pedestal, and it proudly touts as much variety as it does intensity. For every situation that can be solved with flailing melee weapons, another requires the precision of a pistol. For every infected monstrosity sprinting right at me, there are three more stumbling slowly toward my flank. This emergent combat system born from a set of branching scenarios makes me feel like a champion one moment, and a loser the next.

There’s a risk and reward factor pushing it all forward. Should I rush this horde of zombies head-on and knock as many of them down as I can, making it easier to finish the stragglers off? Or should I seek high ground atop a nearby vehicle to avoid any attacks from behind?

When the smoke and guts clear and there’s a moment to breathe, scavenging becomes paramount. Riptide makes completionists out of everyone, simply because scrounging for parts and money is so worth it. Both of these commodities combine to create the ridiculous weapon modifications introduced in the original Dead Island.

There are returning classics like the flaming mace or poisonous knife, but new additions like electrified axes with area of effect damage make sure that every room is stripped for batteries, wires and the ever-appreciated cash. 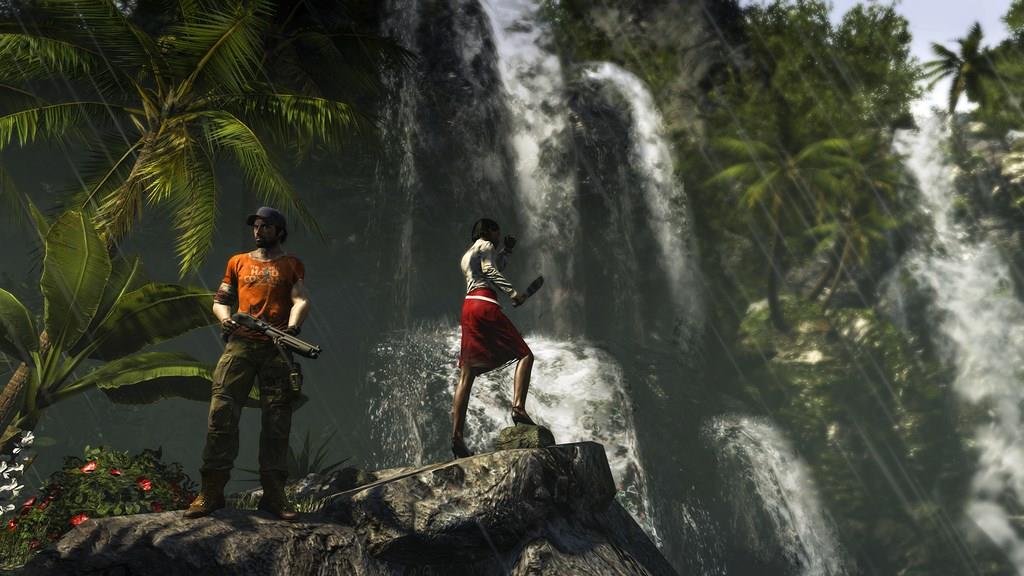 Repairing weapons and selling obsolete ones are also crucial to Riptide’s economy, and there are skill upgrades that expedite both processes. Whether more inventory slots or cheaper repair costs are more tailored to each instance is up to you, but sooner or later there will be more favorite weapons than your backpack can hold.

Alongside inventory and maintenance skills are combat and fury upgrades, the latter of which are aimed at bolstering each respective character’s special ability. These “Get Out Of Jail Free” cards not only provide escape from near-death experiences, but add an experience multiplier to the formula as well. This encourages frequent application of the skill in the necessary situations, and differentiates the characters from each other in cooperative scenarios.

The characters of the original Dead Island mark their return in Riptide –– seeing as how the story of the latter picks up right after the former –– along with newcomer John Morgan. 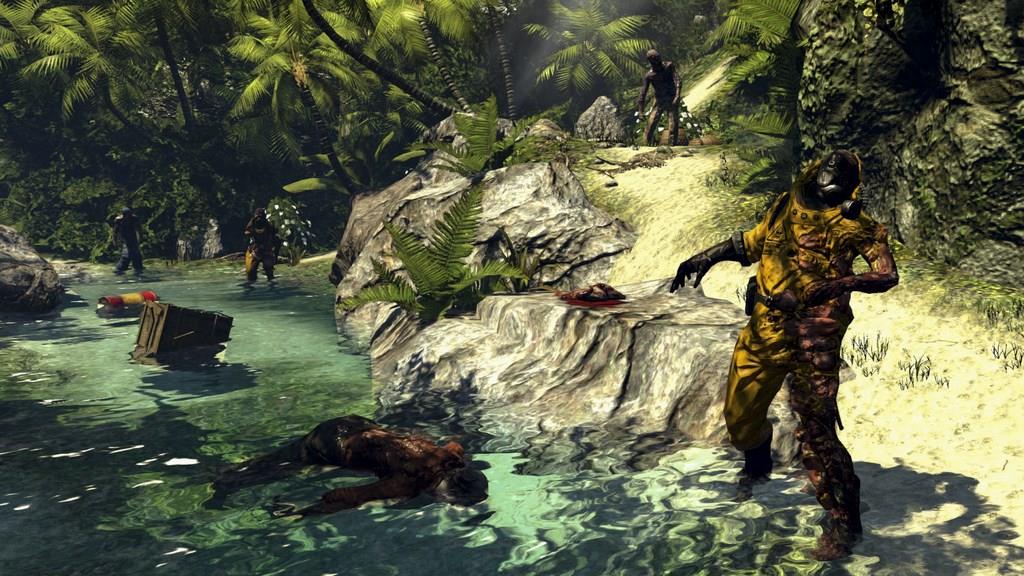 In terms of characterization, Morgan is just as monotonous as the rest of the walking stereotypes inhabiting the island of Palanai; his abilities set him apart, though. Skilled with hand-to-hand weapons and unarmed combat, Morgan fills out the frantic berserker class, complete with twirling staff, should you choose to trigger his Fury ability. My playthrough with Morgan was punctuated by extended searches for nails and blades with which to outfit his already-deadly brass knuckles, making subsequent searches for parts easier. This correlation between scavenging and combat is the same driving force behind every character’s chances for survival.

For every few hours of scavenging, crafting and killing, a test arrives to see how well you’ve been executing all three. Hub defense scenarios are the select few objectives that stand out within Riptide. They’re simple: defend an outlined area for certain amounts of time, or until there are no more zombies to rush the battlements.

The well-worn wave defense scenario plays out beautifully in Riptide, testing the efforts of the previous hours with one focused, desperate bid for survival. Dying only results in a nearby respawn, albeit with a cash payment, but surviving and ensuring that your partners do the same results in the most rewards: more weapons, parts and cash to spend on them.

Placing wire mesh barriers and machine guns establishes a sense of ownership over the contested area, but it also multiplies your chances for survival; so too do the side quests non-playable characters impart. These increase each AI character’s combat effectiveness, grant them more deadly weapons, and provide you with explosives and weapons that serve to increase your own effectiveness as well.

The tradeoff between how much each character improves and how you need to go about facilitating these improvements often comes up short; each and every last one of these miscellaneous objectives are fetch quests. Many of them are simple, tasking you with retrieving ubiquitous items like batteries or bolts, but just as many take hours to complete, elevating the strain of these already-cloying jobs.

These quests are a microcosm of how Riptide’s story gets in the way of its stellar gameplay. For every moment I felt a true sense of progress, another reminded me that a nagging plot is more important than the raw struggle for survival that’s been so compelling up until this point. All I’m doing now is playing fetch with a bunch of cowards more accustomed to life at a resort than the apocalypse they’re supposed to be so used to.

Dead Island Riptide is at its best when it embraces its roots. It’s at once a campy horror movie and a desperate tale of endurance. Hub defense scenarios and personal moments among players yearning for the next repair bench are all the focus Riptide needs, but it over-exerts itself in reaching for more.

The need to scavenge, the need to create, and the need to survive all underlie the entire fight on Palanai, but the pallor of a forgettable story and monotonous objectives overshadows them throughout.
Despite its propensity for insignificant plot points, I can’t wait to play Dead Island Riptide again. I’ll return for the desperate bid for survival, and stay for the stories that emerge as a result.