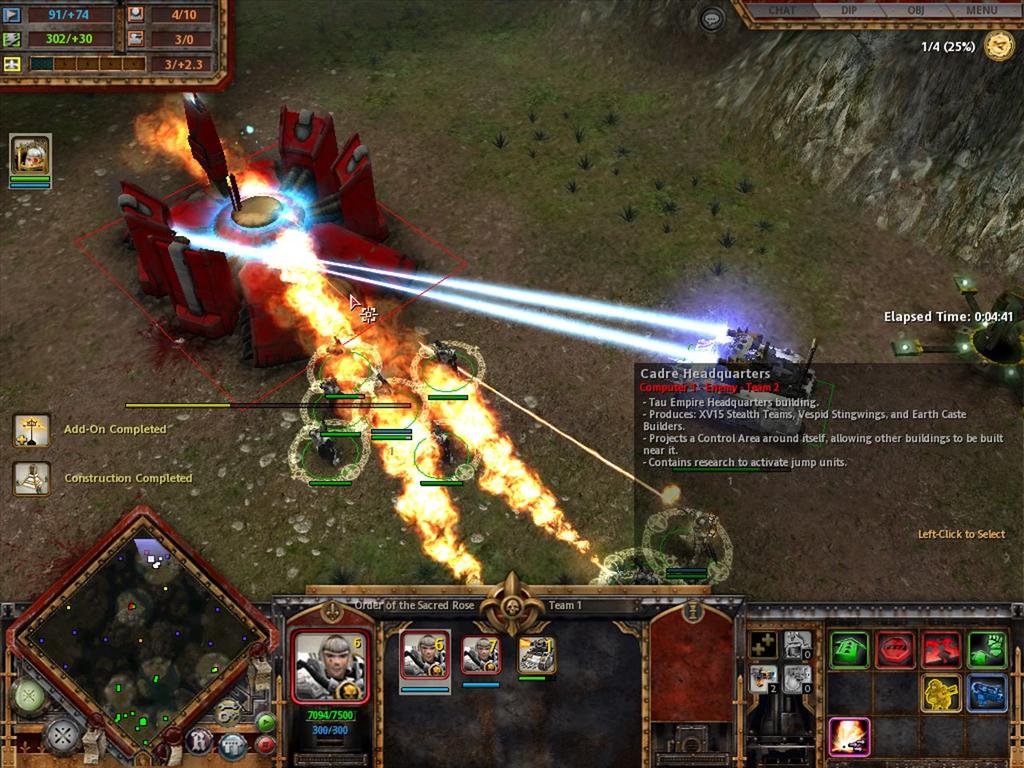 Written by Tyler Sager on 4/15/2008 for PC
More On: Dawn of War: Soulstorm
Sometimes a developer just has to realize when it’s time to move on. A little over a year ago, Dawn of War released a very fun expansion, Dark Crusade. It did just about everything right for an expansion—new races, a fun new non-linear campaign, and a handful of units to round things out. Sure, the game was showing a little age, as it was a few years old. And now we fast forward to 2008, and once again we have a Dawn of War expansion with, well, a few new races, an almost exact copy of that non-linear campaign, and a handful of new units. And that age that was starting to show a few years ago? Still there in spades. While Dawn of War: Soulstorm is entertaining, there’s just nothing here that moves the series forward in any way. But for a few new graphics and some subtle differences in the new factions, I felt like I was playing the same game I had a few years ago.

So what does Soulstorm bring to the table? Most notable are the two new factions, the Sisters of Battle and the Dark Eldar. Warhammer 40K veterans will already be familiar with these armies, and non-veterans may see things that are all-too familiar in their play. The Sisters of Battle are a more fiddly, slightly weaker version of the Imperial forces. They have the ability to attach support units to their squads, giving additional powers and even healing to the pyromaniacal Sisters. Both of Soulstorm’s new factions bring a new resource to the table. With the Sisters, it’s Faith. Faith is generated by placing a special add-on to their listening post, and can be spent by various units to pay for some fairly nifty powers. Unfortunately, this extra power that many of the units possess make for some annoying micro-managing during the break-neck Dawn of War pace. I soon found myself either ignoring these powers whenever I could, or longing for some of my old favorite factions.

The Dark Eldar are a corrupted version of the Elder, and like their cousins they require a bit of finesse to field successfully. The Dark Elder also have a new resource to contend with—soul energy. Fallen enemies remain on the battlefield, surrounded by a purple glow that can be harvested by workers or a few of the other units. This soul energy is used powering some spell-like powers, including the titular Soulstorm itself. These powers are not keyed to any particular unit, so they can be launched just about anywhere on the map, provided enough soul energy has been collected. Collecting soul energy, essentially a necessary third resource for the Dark Eldar, added some extra busywork to this faction, and I found myself liking these guys even less than the Sisters. 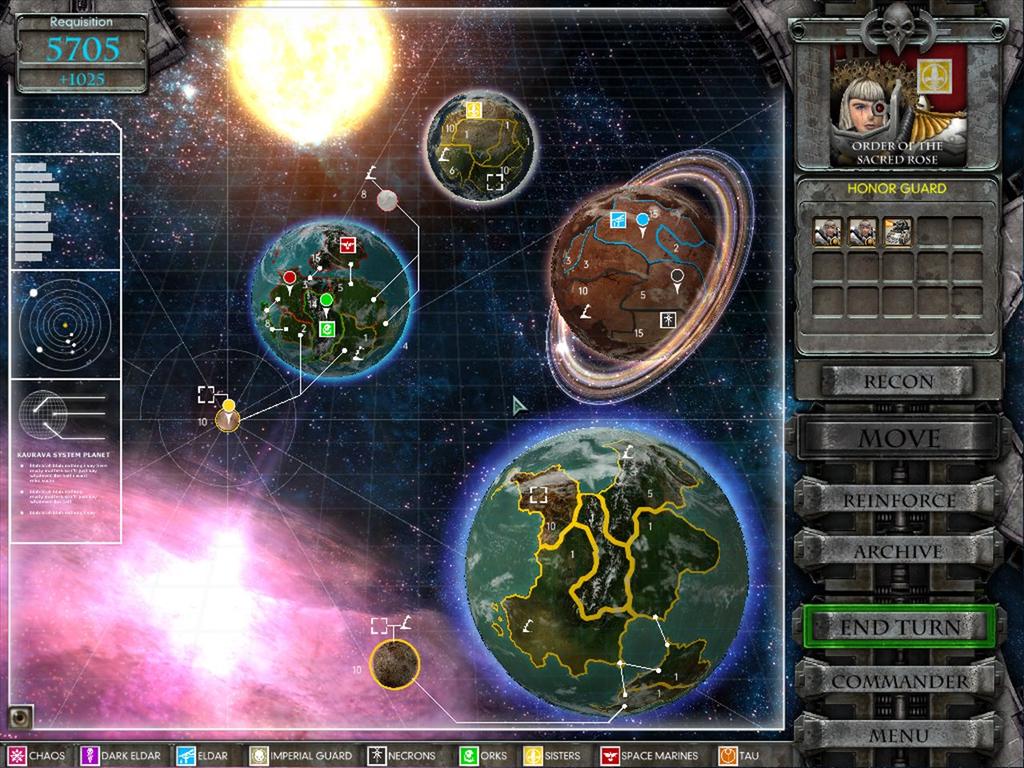 Most every faction, including the two new ones, gains a new flying unit. While this sounds like it will add an entirely new dimension to the game, all this really means is that there are now units that melee-only attackers cannot hit. In a game filled to the brim with guns, blasters, and cannons, this aerial theatre of war doesn’t do much at all to change the field of battle.

The single-player campaign feels exactly like the single-player campaign in Dark Crusade. There’s a turn-based map (this time it’s a series of planets), and when factions attack with their main army, the game drops to the familiar RTS format to duke it out. Just like in Dark Crusade, each faction has a main “hero” unit, which can be upgraded with Wargear won through various victory conditions. The majority of the battles are either “wipe out the enemy” or “control the strategic locations”. Each of the factions has a home province, and battle on that province is a more specific, more interesting battle. Wiping out a faction’s home province removes them from the game, in addition to giving the victor a special power. There’s some sort of plot about a Chaos storm that somehow brings each of these factions to the same location, but like with all Warhammer 40K settings, most of these guys don’t need any excuse to fight everyone they come across.

The game plays exactly as the previous Dawn of War titles, so there’s nothing new or exciting there. The graphics look good for the game, but they are nearing four years old. In fact, there’s very little that stands out in any way to make Soulstorm a must-have product. For those that have to have some different wrappings on their Dawn of War play, Soulstorm might be worth a look. For me, however, I would get just as much entertainment out of loading up Dark Crusade as I would firing up this new expansion. It’s time to move on, and Dawn of War 2 is right around the corner.
There’s nothing new under the Dawn of War sun. Soulstorm is just a repeat of the Dark Crusade expansion, with two different factions thrown into the mix. It might be worth a look for those who absolutely have to complete the series, but most will get just as much mileage from the previous expansion.