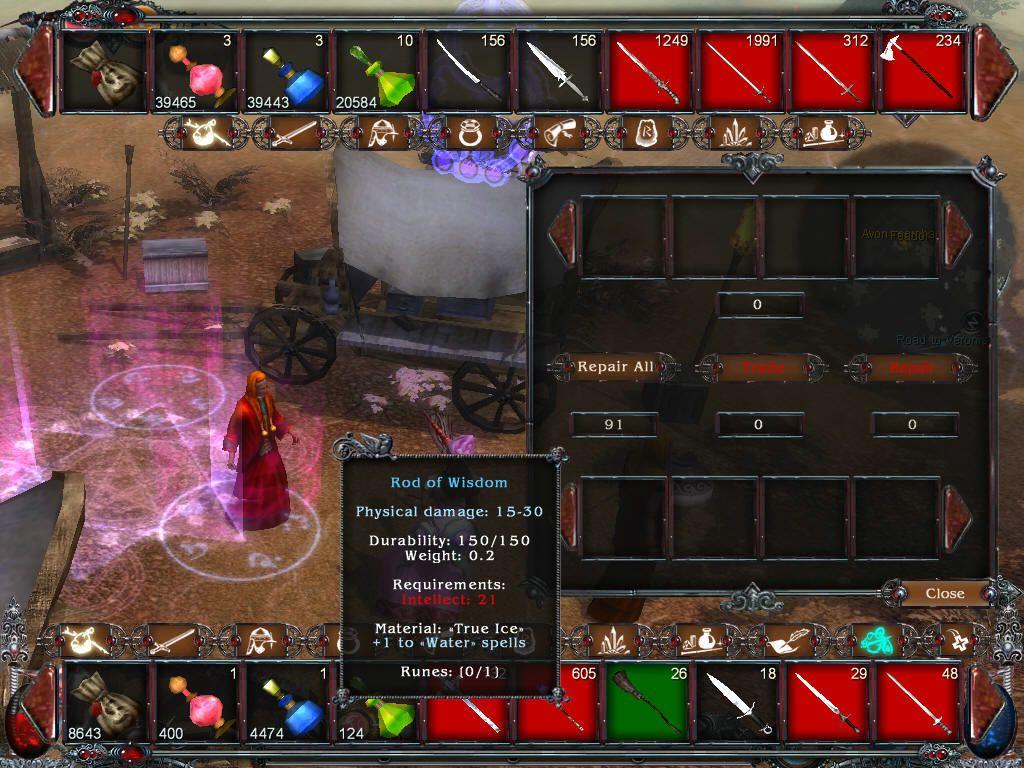 Written by Tyler Sager on 12/4/2007 for PC
More On: Scrabble
The action RPG genre is a tough one to balance out—players will need to spend hours grinding their way through hordes of enemies, slowly advancing in both power and equipment. Good games will find a way to make this grind enjoyable, even addictive. The carrot-on-a-stick approach is essential, with the vision of getting that next major power, talent, or piece of weaponry dangling just ahead, making players push ahead for just a few more minutes. Unfortunately, Dawn of Magic seems to forego the carrot altogether, leaving us with all the tedium and grind of a good action RPG and none of the rewards.

Dawn of Magic tries very hard to be different, but most of their attempts at innovation miss the mark. We see this even in character creation, where players can choose from four starting “classes” of character: the bookish Scholar, the “Weird Gypsy”, the Baker’s Wife, and the Fat Friar. The game is laced with this level of tongue-and-cheek humor, but many times it seemed to pull me out of my suspension of disbelief rather than make me chuckle. For all the cleverness put into these new classes, they’re really nothing more than a proto-mage, a balanced character, a tough tank, and a fighter. Players also choose some starting spells and an alignment, which has some effects on how the overall story plays out.

The story, as far as I could follow it, was very generic fantasy fare. A big baddie is gathering its forces, and it’s up to the wet-behind-the-ears newcomer to level up and bring the baddie down. This time around there’s some sort of fallen-angel sort of thing named Modo mucking things up, and its up to the players to quest and kill their way to victory. I basically stopped paying attention to the story early on and just followed the in-game logs to keep me pointed in the right direction.

The game itself is made up of several maps which are interconnected by a portal system. While there are a few cities and places of refuge, most of the maps are chock full of monsters thirsting for the blood of anything that happens to be passing by. So players must kill everything in sight while speaking with some of the non-hostile locals to gain more quests. I wasn’t impressed with the quest selection, with most of them being the boring “kill this or that” or “bring me X” variety. Completing a quest gains the players experience, Skill or Spell points to spend on developing their character, and many of the optional quests can be completed multiple times, making overskilling quite easy to do early on.

Character development is a bit complicated, and the rewards for improving a stat or spell don’t seem to be all that great. Characters level in a sort of strange three-step process, with levels like “1, 1+, 1++” and so on. At each sub-level, additional attribute points, skill points, or spell points are earned. Attributes points increase strength, energy, or health reserves. Skill points are spent on a handful of skills of varying usefulness, such as weapon and armor mastery, crafting, alchemy, and a teleportation skill. The spell selection, on the other hand, is much more involved.

There are twelve schools of magic, each with a handful of spells. Spell points can only be spent if the character also has the correct spell scroll, which can be found randomly throughout the game. Really want that fireball spell to power up your flame-caster, but seem to be stuck picking up some goofy air-shield scrolls? To bad! Sure, you can use the alchemy process to change your scroll randomly into another one, but it’s just a roll of the dice. And with 96 spells to get, chances are you’re not getting what you want. To make matters worse, each time you want to increase the level of a spell, you need yet another copy of that scroll. I found this incredibly frustrating, since spell selection is central to development of the Dawn of Magic character. As a side-effect of spell choice, as characters start focusing on certain schools of magic, they begin to undergo some (often silly-looking) physical changes. My character, for a time, sprouted a demon horn, strange wings, and some sort of scales. These also have some game-stat effects, but for the most part I just felt goofy wandering while talking to the perfectly-normal-looking natives. Using spells is a bit unique in Dawn of Magic, as most spells are used in tandem with another spell. For instance, adding Fire Mastery in a secondary slot boosts the effectiveness of Fireball, but placing Alchemy in that same secondary slot results in a weaker fireball with a nice poison-y effect. I did have some fun finding good combinations of spells, but after that newness wore off I was back to the same old grind.The equipment selection is quite varied, but none of it seemed all that enticing. I never found myself excited about picking up a new wand or bit of armor. There is a crafting and an enchanting option, allowing players to add bits of collected materials and runes to their equipment, but even this seemed a bit stale to me. Managing character inventory was a headache, since the items are shown in a scrolling bar at the bottom of the inventory screen. Finding that one scroll or weapon I was after took too much time and effort, and often I’d just give up and continue slogging through with what I had.

As far as game play itself, Dawn of Magic is pure hack-n-slash. Left-click to run or attack with a weapon, right-click to blast ‘em with a spell, rinse and repeat. There are swarms of monsters to fight, although most of them can simply be kited around the map and sniped to death. In addition, much of the time I’d find my enemies killing themselves much more efficiently than I could manage. Enemy attacks can hit fellow monsters, so I’d often see them accidentally blasting each other in their enthusiasm to catch me. On the flip side, my spells could easily affect innocent bystanders and townsfolk, and more than a few fell to a miss-targeted spell. To make things worse, targeting felt a little off, so I was always missing my enemies because of a poor mouse click. Dawn of Magic also brings back something I thought we’d never have to see in a modern game--the “invisible wall”. Many of the outdoor maps were bounded by these invisible edges, and while it looked like I could happily run through the wilderness in all directions, I’d soon find myself pinned against the edge of the map with swarms of enemies pounding away. This all boils down to a mess of a combat system which quickly lost any semblance of fun. And in a game that’s all combat, I quickly tired of Dawn of Magic altogether.

The graphics looked a dated, and I found most maps way too cluttered. There were lots of spell effects, monsters, terrain and environment, and it made things difficult to navigate. The sound effects were equally unimpressive, and the voice acting was quite poor. The interface wasn’t great, but I’ve seen far worse in other games. I’d overlook most of these things if the game play itself were more riveting, but here they just make matters worse.

I grew tired of Dawn of Magic after a few hours, and I spent far longer playing to see if it would get any better. It didn’t. The poor combat, tired look, and lack of any enticement to keep going adds up to an unimpressive game. There have been some great RPGs in the past year, and Dawn of Magic doesn’t match up. Leave this one on the shelf.
This RPG seems to miss the mark in just about every way.