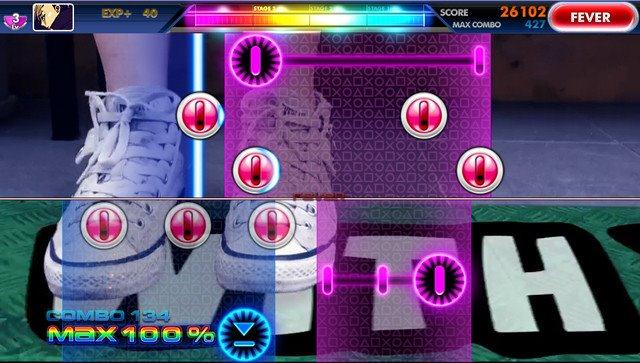 Written by Matt Mirkovich on 1/9/2013 for Vita
More On: DJ Max Technika Tune
Music games have been a better part of my gaming MO since 1999, I've been on the scene for a number of new franchises, and during the time I spent living in Texas one game in particular seemed like it was going to pass me by completely. That was the DJ Max Technika series. Believed in by few arcade operators it seemed like Pentavision's touch screen musical foray was forever going to remain out of my reach. Picking up a Vita was the first step in remedying that. Or maybe it was moving back to California where machines we more plentiful? Either way, the DJ Max Technika series now has its first console release in the form of DJ Max Technika Tune, and I for one could not be happier. DJ Max Technika Tune stands head and shoulders above all other music games on the platform, if only because there are only two other titles, and one doesn't even count as a traditional music game (Sound Shapes) while the other is an import (Hatsune Miku Project Diva f).

Watching someone play Technika Tune, it's easy to be impressed with the visuals of the game. The Vita's OLED screen makes all of the colors incredibly bright and the background movies look really sharp. Even the opening video pops off the screen and while it doesn't do a damn thing to explain the game, it just shows how much style this game exudes. Presentation goes a long way to making this game look good with its crisp menus and colorful banners and it covers up how much of a bare-bones port Technika Tune can feel like at times.

That's not to say that the gameplay about Technika Tune is lacking, in fact it's quite the contrary and it is made all the better by great music. There's over sixty songs available along with a few unlockable tracks, all accessible to listen to in the game's 'Album Mode' that lets players mark tracks as favorites to create their own custom play list and even allows you to watch the song's music video. The music ranges from tracks by Korean pop group Kara, to a bunch of in-house artists who produced tracks with a wide variety of genres. A lot of these tracks are going to be love 'em or hate 'em, but in my case I found every track worth playing based on musical merit alone. Though some of the remixes seem a little out of place, like Cranky's take on La Campanella, others like Tak's Black Swan offer an interesting take on classical pieces. The point is that with this much music there is going to be something for everyone and with DLC in the future it's possible that Pentavision could score some more well known artists.

Playing Technika Tune is a definite departure from the previous DJ Max games, offering completely touch driven controls versus the button mashing madness of its PSP cousins. Notes appear on the screen and players must tap the notes as the slider bar crosses over them. In an effort to keep things in a tight package the bar alternates from sweeping to the left, to sweeping to the right so your fingers can always follow the music so to speak. Notes are keysounded which means each note creates a specific piece of music and playing well obviously will keep the song sounding good, giving you a great barometer for how you're doing on any given song. There are also accuracy markers that appear, though their usefulness is kind of short lived as they tend to get buried underneath the movement of your fingers. Some notes, namely hold notes and tap notes, make use of the Vita's back touch-pad. This new addition requires a bit more dexterity than one would expect and can be turned off or played on the screen if so desired, though it is worth learning to play with this mode simply for the fact of being able to unlock everything that this game has to offer. 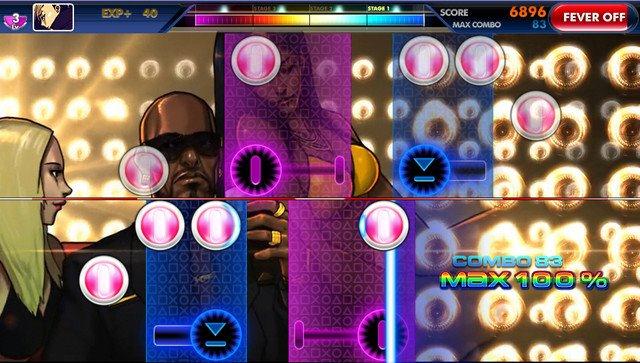 The game features three different gameplay modes each with their own difficulty levels. The Star Mixing mode is the easiest of the three and doesn't require players to use the back touch screen along with really easy note patterns. The Pop Mixing mode is a definite step up and makes use of the back touch-screen. The most difficult mode, Club Mixing allows players to create a custom play list of tracks along with a mystery track that is revealed when played. Freestyle mode allows players to play each track that has already been played and lets players go at songs to their hearts content. The standard three song play mode results in a lot of viewings of the ending movie and credits screen, which makes the experience feel a bit more shallow than it actually is. There are also leaderboards to compete against the world, and there is also a collection mode that has images and icons that can be unlocked. The icons each offer different augments to the game and can be used to personalize your own character that levels up as you clear songs.

The large song list and captivating touch-screen gameplay make DJ Max Technika Tune a lot of fun in spite of the game's small scope. The prospect of future DLC also gives this game a bit of lasting power, and it looks like the team at Pentavision learned from the mistakes of the PSP games and kept Technika Tune from being an unnecessary grind-fest to unlock some of the content. The music is the star of the show and while there isn't much that your average Rock Band or Guitar Hero fan will recognize it's still some solid content by some very talented artists. Music games have definitely lost a lot of steam over the past few years but DJ Max Technika Tune is a great new addition to the Vita's library and does a wonderful job of justifying the existence of the handheld. It's one of those great concepts that works perfectly for on the go gaming and hopefully the guys at Pentavision can build on future iterations of the franchise, this first go round is definitely a step in the right direction.
Music games kind of wore out their welcome in 2009, but DJ Max Technika Tune can certainly help make them relevant again with unique gameplay and some quality musical tracks.