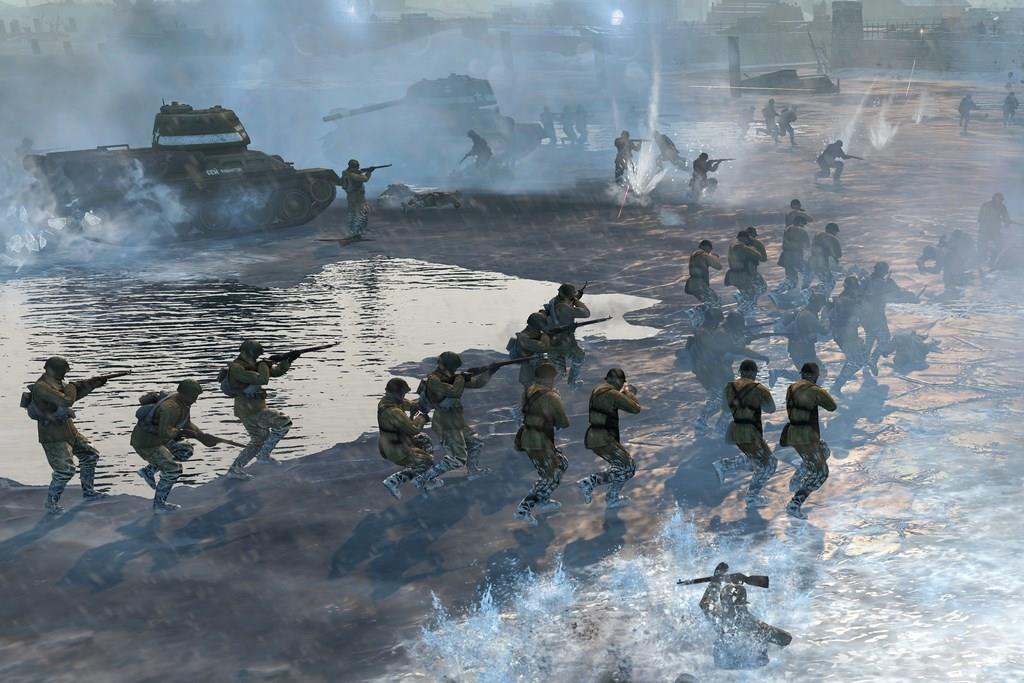 Written by Travis Huinker on 6/26/2013 for PC
More On: Company of Heroes 2
The original Company of Heroes set a new standard for real-strategy games.  For the first time the environment played a crucial role in the battles.  Buildings could be occupied by troops and nearly every wall and every structure could be destroyed by artillery and tanks. Company of Heroes 2 from developer Relic Entertainment returns to World War II, but switches to the perspective of the Eastern Front with players commanding the Soviet Red Army. Aside from the improvements to the gameplay and Relic's in-house built Essence 3.0 engine, Company of Heroes 2 features an extensive amount of content including a lengthy single-player campaign, Theater of War mode, and multiplayer matchmaking through Steam.

The battle for Mother Russia
The campaign's narrative follows the flashbacks of Soviet Army lieutenant Lev Abramovich Isakovich during which time he is being interrogated at a gulag in Siberia. Through each flashback, the story is slowly revealed of how he became locked away in the gulag. The narrative's course includes many of the iconic Eastern Front battles from Stalingrad to Berlin, while also including smaller operations. The variety of missions range from the standard real-time strategy objectives such as defending a strategic point or assaulting an enemy base to more specialized scenarios in which the player only leads a few infantry squads through enemy-occupied territory.

As much as the missions were exciting in the campaign, the actual narrative didn't match in quality as none of the characters were memorable. The presentation didn't help as the quality of cinematics seemed dated as character animations weren't fluent or believable. It didn't help either that the protagonist's face wasn't that discernible from the other soldiers during cutscenes. The flashback method of telling Isakovich's story never proved to be that compelling as the literacy device has been used countless times before and more effectively in past military narratives.
​

Retreat is not an option
Fortunately, the narrative is of little concern when battles begin. Even with gameplay improvements such as enhanced line-of-sight for units, Company of Heroes veterans will feel right at home. Nearly all of the core mechanics have stayed the same from controlling units to building base structures. The major difference from the original is how players command Russian versus American forces. Troops in the Red Army are continually reinforced as being disposable and the game reminds players that it's easier to forgo using remainders of squads in favor of new recruits. Another mechanic akin to the Red Army is a countdown timer that occurs during battles in which retreating soldiers are shot by a Soviet commander.

Soviet forces in battle can utilize many of the same tactics as the Germans, but often feel underpowered when up against tanks. The one advantage that's nearly always available is the ability to recall additional squads of soldiers to the battlefield, which can aid greatly during intense firefights. Company of Heroes 2 continues the franchise's lack of regard for battlefield environments as structures from churches to bunkers can be completely devastated by artillery fire and other explosives. Tanks are nightmares on the battlefield as instead of moving around a wall, they'll simply charge straight through the concrete barrier. With the Eastern Front setting, elements such as the weather and environment also play a crucial role in which frostbite can slowly kill exposed units and deep snow impedes their movement through the battlefield. 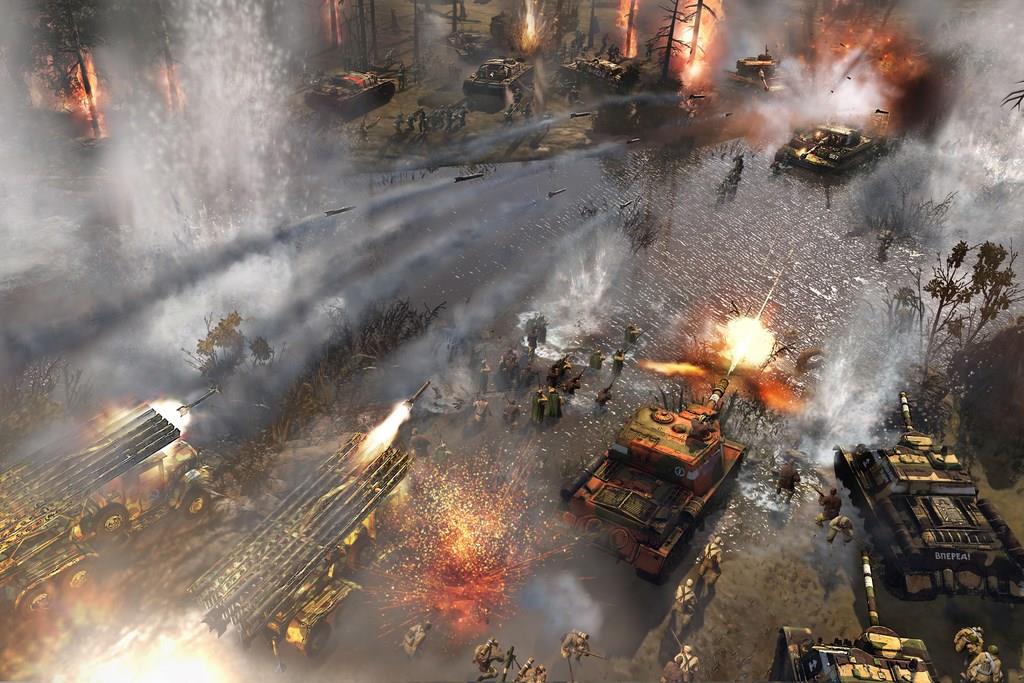 Aside from the highly-entertaining explosions and fully-destructible environments, units in battle can often become frustrating to manage as their controls are limited. All of the units in the game contain secondary abilities such as grenades and artillery barrages that are often pivotal to victory. When multiple units of the same or different type are selected, these secondary items disappear only leaving the normal move and attack commands. Thus, players must click on each individual squad and issue the special commands which becomes overly difficult when you have large groups of enemies.

Taking the battle online
Along with the returning skirmish mode in which players can customize their own battles comes the new Theater of War mode that contains both single-player and cooperative scenarios and challenges. These scenarios range from iconic battles that the developers weren't able to fit into the campaign to specific challenges that put to test certain skills or teach new tactics. The single-player and cooperative scenarios offer more freedom than missions found in the campaign and are more akin to skirmish matches. These scenarios and challenges also differ from the campaign in that they cover both the Russian and German forces.

The real intensity of warfare in Company of Heroes 2 is found in multiplayer matches as reacting to human players remains far more interesting and exciting than playing against the AI. One major addition not only to the multiplayer matchmaking, but across all of the modes includes a leveling system that awards players badges and medals for completing missions, performing specific actions in battle, and a range of other achievements that total over 300. Ranks earned through the leveling system award additional commanders, vehicle skins, and improvements to unit damage and other statistics. This system remains an incentive to keep playing additional scenarios and matches against either human or AI opponents. Real-time strategy fans will be busy for awhile completing all of the content that awaits in each of the game's modes.

Unrivaled real-time strategy destruction
Few real-time strategy games capture the ferocity of war as found in the Company of Heroes series. The sequel continues the tradition by containing even more destructive and spectacular explosions with a newly-improved Essence 3.0 engine with added DirectX 11 graphics effects. While at first glance, the game might not look like a huge contrast from previous entries in the series. However, it's all about the details with the improved graphics as little touches such as footprints and vehicle tracks in snow to the cracking of ice make for an impressive visual experience. 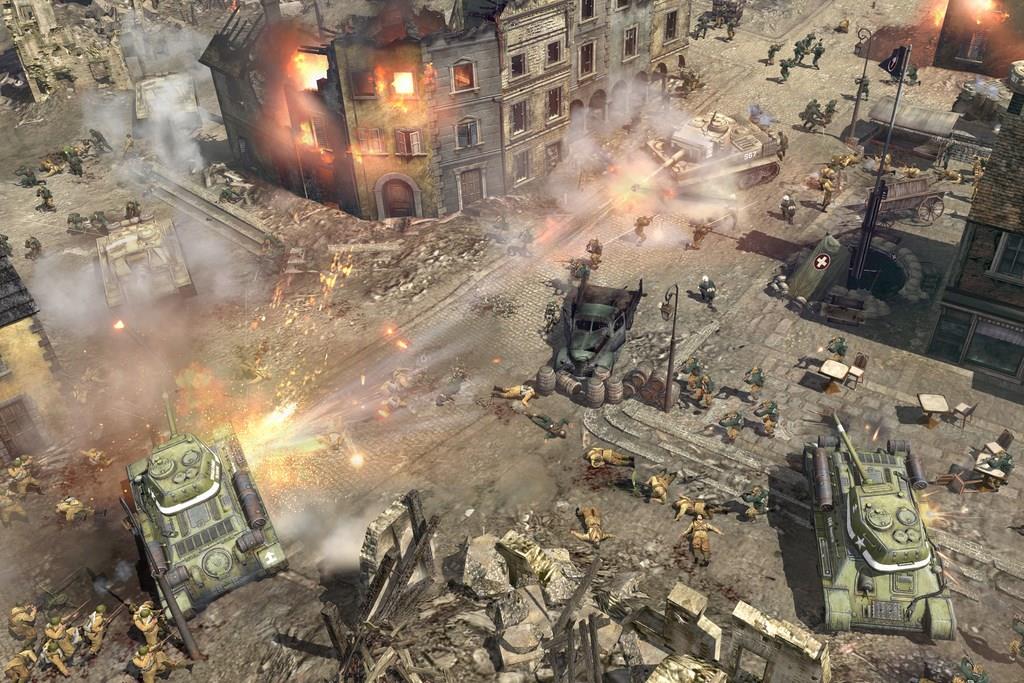 Battles often leave the environments in complete ruins and create for a major contrast from their beginning state before the artillery strikes and tank destruction. The sound effects are equally impressive as bass thunders with explosions and every gun shot is heard loud and clear across the battlefield. A notable feature that is sure to excite game broadcasters is the inclusion of in-game Twitch support. Players with microphones can even include their commentary during both single-player scenarios and multiplayer matches. Streaming often requires the use of a secondary program, but with the built-in game support it's now as simple as logging in with your Twitch username and password.

For the Motherland
Company of Heroes 2 is a solid addition to the series that provides players with another real-time strategy perspective of World War II through the Soviet Red Army. An impressive amount of content including the single-player, Theater of War, and multiplayer modes ensure players will be busy for awhile earning badges and medals through the leveling system. While there a few issues with the narrative's presentation and how units are controlled on the battlefield, none of them ruin the overall experience. Company of Heroes 2 is even more entertaining and addicting as the original resulting in a game that shouldn't be missed by real-time strategy veterans and newcomers.

Company of Heroes 2 is available now for Windows PC.
Few real-time strategy games make battle such a visceral and satisfying experience as Company of Heroes 2. The core gameplay of the series remains intact while veterans and newcomers will have to adapt to controlling the Soviet Red Army in their battle for Mother Russia. The game does suffer from a few issues with lackluster narrative presentation in addition to the limited control of units. Yet, the extensive amount of varied content and addictive nature of the gameplay solidify Company of Heroes 2 as a solid entry in the series.