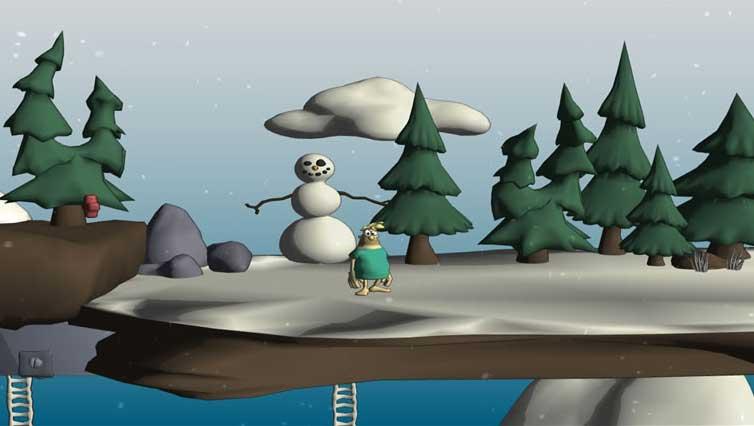 Written by John Yan on 7/31/2006 for 360
More On: Cloning Clyde
The great thing about Xbox Live Arcade is that you can pick up some nice little games that aren’t too expensive by some good independent developers. The folks behind Outpost Kaloki X, Ninja Bee, have their second game out this time around with Cloning Clyde.

Cloning Clyde is a side scrolling action/puzzle game in which you play Clyde and as the title suggests you’ve been cloned... a few times. Clyde’s also not the brightest of the bunch as evident by the lure of $20 that leads him into his current predicament.  Now it’s your job to escape the 24+ levels and take a few of your clones with you.

As Clyde you’ll run around each level trying to achieve the objective set forth so that you can continue on to the next obstacle. Clyde knows some kung fu, which comes in handy when he has to take out security robots that launch explosive chickens at you. Once you take out all the robots on the level, you may proceed to the next level as well as opening the way to rescue any clones on the current level. The premise is simple so anyone can really pick the game up and work their way through. It’s this ease of play that should appeal to the casual gamers.

Scattered throughout the level are DNA strands that you can collect. Once enough has been picked up, you can unleash a nice little supermove to quickly take out targets. You don’t necessarily need to pick them up but they do help a little to get by the level quicker. There are also some little action figures that can be collected for more points.

You’ll also have the ability to clone yourself to solve the various puzzles when you come upon a cloning machine. Not only will you be able to make copies of yourself, but you’ll also be able to mutate yourself into various forms. For example, your normal form can’t swim well but transform into a mutant frog and you’ll be able to traverse even the most lengthy water hazards. If there’s a platform that you can’t jump to, transforming a chicken can afford you to fly to the areas that were previously unreachable. You’ll even be able to turn into a walking explosive barrel to take out enemies and obstacles. Once you mutate, you won’t be able to mutate back or into another form. That’s ok though as there’s usually plenty of human Clydes for you to use should another form be needed to get to the goal. Cloned Clydes can also be dropped down from boxes so cloning isn’t the only way you’ll be able to find a few Clydes to use.

Clyde can also pick up objects such as rocks, animals, even other clones. For example, some puzzles need you to throw a chicken into a group of mines so that they’ll explode and not hit you. Animal activist can calm down as this will in no way kill an animal but it is rather funny to see a featherless chicken waddle around after being used to set off a mine. And if you want to take out some aggressions, go ahead and pick up a chicken or a sheep and toss them around the level or give them a nice kick to send them flying.

With a few more of Clydes on the level, you’ll have the ability to switch between them at will. Walls and other obstacles won’t block your path when switching and some puzzles need you to switch to some Clydes that are on another side of a door or wall. You’ll need to use the Clydes in some way to solve the puzzles presented to you. It could mean having a few Clydes stand on some buttons simultaneously or use one to launch another with a catapult. Once a level is completed, you’ll have the opportunity to lead them to an escape hatch. It can become a little annoying if there are a good number of Clydes on a level to try and lead each one to the exit but thankfully you don’t have to in order to finish the level. Leading the clones will just increase your score and also a certain amount is needed for an achievement but you’ll never be forced to lead all or an X number of Clydes to the escape route.

Levels can also contain levers, trampolines, and rockets just to name a few other objects that you’ll have to use to get by. Pull a lever and you might drop down an animal to transform into. Perhaps the lever will open a doorway for you to walk through. One of the funniest things you can do is jump in front of a rocket and watch Clyde get flown across the screen on the top of the rocket. There are other objects that can help Clyde and it’s the variety that helps make each level unique and fun.

The graphics for Cloning Clyde are pretty humorous. When the main character walks around in a hospital gown with the back wide open, you can expect some pretty funny character designs though out. The game almost has claymation look to it. It’s the cartoony feel that gives Cloning Clyde a unique look. I especially like how each of the mutations are rendered. It’s not a game that will show off he power of the Xbox 360 but it’s very clean and nicely designed.

You don’t have to play the game alone as you can hop onto Xbox Live or play via split screen with a friend. Over the Internet, you can play with up to three others and I have to say it’s a lot of fun working your way through the game with a few others. It also lowers the monotonous aspect of the game so you don’t have to be responsible for rescuing the Clydes all by yourself. If you rather play against someone you can enter in an up to 4 players versus game where it’s everyone for themselves or in teams. Playing cooperatively though was the highlight of this game for me and the ability to jump into a quick co-op game also makes it easy to do.

It’s going to cost you 800 points ($10) but that’s not too bad considering the original nature of the game and the fun that can be had playing with others online. Cloning Clyde is certainly a quirky platform puzzle game and it’s not a bad little pickup on Xbox Live Arcade.
It's fun and a blast in multiplayer. Cloning Clyde isn't a very deep game but it can be worth your $10 if you like side scrolling games.