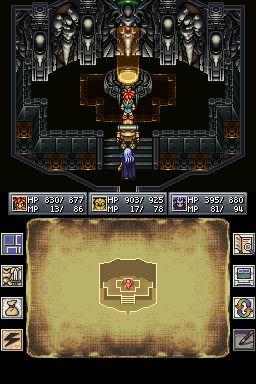 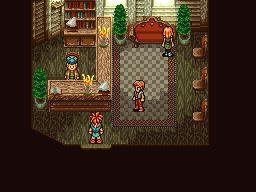 days after the PlayStation, this Super NES game was largely ignored due to the excitement over impending 32- and 64-bit wars. However, what Chrono Trigger does is successfully take everything that SquareSoft had learned about making quality role-playing games and mixed it with one of the most compelling stories of all time. Here we are more than a dozen years later and Chrono Trigger remains the single greatest 16-bit role-playing game around, even going as far as rivaling the best of the newest RPGs. It's not perfect, but regardless of whether you're a long time fan or new to the series, Chrono Trigger is a must-own Nintendo DS game.

While a lot of modern day role-playing games take a long, long time to get going (I'm looking at you Final Fantasy XII), Chrono Trigger gets the ball rolling almost immediately. You play Crono, a silent hero who decides to go to his town's fair to support his inventor friend Lucca. Along the way he helps a few people and meets a beautiful (yet oddly familiar) young woman named Marle, who decides to tag along. Before long you're being asked to take part in Lucca's crazy teleporter invention, which is a shoe-in to win the best invention award at this year's science fair. There's just one problem, when Lucca's creation malfunctions it has a tendency to send people back in time.

In true science fiction fashion, Lucca accidentally sends the beautiful Marle back in time, which means that the two friends are going to have to step up and rescue her. Unfortunately when you play with time travel things tend to get a little sticky, and that's exactly what happens in Chrono Trigger. Before you know it you're traveling into the future to discover that the world is going to be rocked by cataclysmic catastrophe, which means that you're going to have to travel back in time to fix it, which results in all sorts of problems. By the end of the game you will have traveled all the way to the end of time and back to when dinosaurs and cave people roamed the planet. All this just to make sure everything works out for your present day existence.

What sets Chrono Trigger apart from most of Square's other adventure games is how fast all of this happens, not even an hour into the game you will have traveled back and forth through time, battled dozens of enemies and, unfortunately, been tried for kidnapping. If all that happens in the first hour then you can only imagine how exciting the rest of the game is. This is one role-playing game that doesn't slow down, you're constantly rushing around trying to resolve problems, pick up rare artifacts from ancient times and, most importantly, make sure the future isn't as bleak as it looks when you first saw it.

To make sure all of this happens you're going to need a few friends, and Chrono Trigger has all sorts of cool side-characters just waiting to help you out. While you can never have more than three people in your party at any given time, the game does allow you to swap in people who can aide you on your quest. For example, when you travel back to 65,000,000 BC a young cave woman will help you on your adventure, yet in the future you will team up with a robot that Lucca helped bring back to life. Heck, there's even a courageous frog that is there to battle the bad elements with you. It may be a cast of misfits, but it's a memorable lot with some funny dialog and plenty of witty one-liners.

While the time traveling and crazy story may be original, it's not the only innovative aspect of this role-playing game. At first the game looks and feels very much like a traditional 16-bit Final Fantasy game, you play a group of characters that is seen from an overhead perspective. But the similarities end there, as you will notice the first time you step into battle. Instead of being transported into a brand new area when you go to battle, Chrono Trigger keeps the fights on the standard map. This means that you can always see the enemies and choose to engage them or not. Better yet, by keeping the battles on the playing field you don't break up the action, so you don't have to worry about random battles or losing the flow of the experience. What's more, it's actually a lot of fun to see the various enemies interact with the world you've been exploring. All these years later this may not sound like much, but there's no doubt that it changes the feel and pace of the game in a positive way.Aside from where and when you fight, Chrono Trigger's combat is fairly similar to other Square role-playing games. For starters, all three characters have a timer bar that tells you when they can take a turn. What's more, you can choose between a regular attack, using an item or unleashing a more powerful magic technique. For the most part the combat is standard fare, which will help ease long time Final Fantasy fans into the action. As you progress through the game you will discover that there's a bit more to the combat, especially when you factor in the two and three person attacks. But for the most part the game feels like a simplified version of Final Fantasy VI. 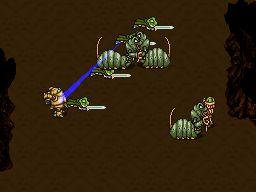 When you're not leveling up your characters and traveling throughout time, you'll be staring at the gorgeous hand-drawn graphics. Unlike Final Fantasy III and IV, Square Enix has wisely kept the original graphics and not turned Chrono Trigger into some weird 3D adventure game. Keeping it traditional was definitely the right move, as the graphics have aged surprisingly well. Even though the game is a dozen years old, the highly detailed pixel graphics still hold up in this 3D polygon world we live in. The characters are a wee bit small on the Nintendo DS screen, but the game's backgrounds and locations are nothing short of stunning. Even with their limited animations, Crono and the rest of the gang are really expressive. I'm sure there are people that would have liked to have seen this game completely remade, but as far as I'm concerned there's nothing they could do to make this game any better looking that it is right now.

Also intact is the game's amazing soundtrack. "Amazing" is not a word I often use for 16-bit soundtracks, but there's no better way to describe the music from famed composers Nobuo Uematsu and Yasunori Mitsuda. Going in I was worried that the crummy Nintendo DS speakers would give the game a tinny sound, but I was pleasantly surprised by the audio quality. The music is even better when you plus in a pair of headphones. In this day and age of disc-based games, people forget how good the Super NES music was back in the 1990s. If you ever had any doubt, Chrono Trigger will make you a believer in the Super NES sound card.

While Square Enix may have kept the graphics and sound, they have made a few changes to the game that should be pointed out. For one thing, they've updated the game's translation. It's not that the Super NES game was poorly translated; however there were definitely aspects that felt a little out of place. This DS card also features the various animated cut-scenes that were added to the 1999 PlayStation port. And that's not all; Square Enix also went in and created a series of new dungeons for the game, plus a brand new ending. There's also a multiplayer mode now, but the less said about that the better.

Not all of the additions involve adding content to the game, though. As you might expect, this Nintendo DS version takes full advantage of the portable's unique attributes. For example, the game's interface is changed slightly so that you can see important information (maps, character info, etc.) on the bottom screen while playing through the game. What's more, you can use the system's touch screen to control just about everything, from walking around to navigating the menus to planning your moves in the middle of combat. Unfortunately I found most of the touch screen stuff to be pointless, I had an easier time doing all of this by simply using the traditional D-pad and face buttons. But that's just me; it's nice that Square Enix at least gave people the option of playing it however they want. 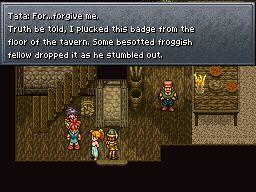 As interesting as all of the added stuff is, the game's brilliance is still in the story, characters and time traveling gimmick. There's a certain charm in going from time to time changing things, only to realize that you've made things worse in your own time. It's fun to have a brand new batch of enemies in each time period, especially when you're fighting dinosaurs back in the era of cave people. All this is the real hook of Chrono Trigger. The new stuff is nice, but the game was already spectacular without it.

Chrono Trigger is one of those games that every RPG fan should play through at least once in their life. If you somehow missed it the first time around, this Nintendo DS cart is your second chance. And with all of the added content and animated cut-scenes, Chrono Trigger DS is the ultimate version of this classic adventure game. If you love the idea of time travel and always wished that Final Fantasy would move a little faster, then this is the game for you. Don't ignore this portable version, the last thing you would want to do is make the same mistake twice. Chrono Trigger is a real treat, a must-own game for anybody even remotely interested in adventure games.
With a lengthy story, memorable characters, detailed graphics and a fast moving story, Chrono Trigger stands out as one of the best role-playing games of all time. And for the time being, this slightly updated port proves to be the best role-playing game on the Nintendo DS. Regardless of whether you missed it the first time or not, Chrono Trigger is a must-own game!