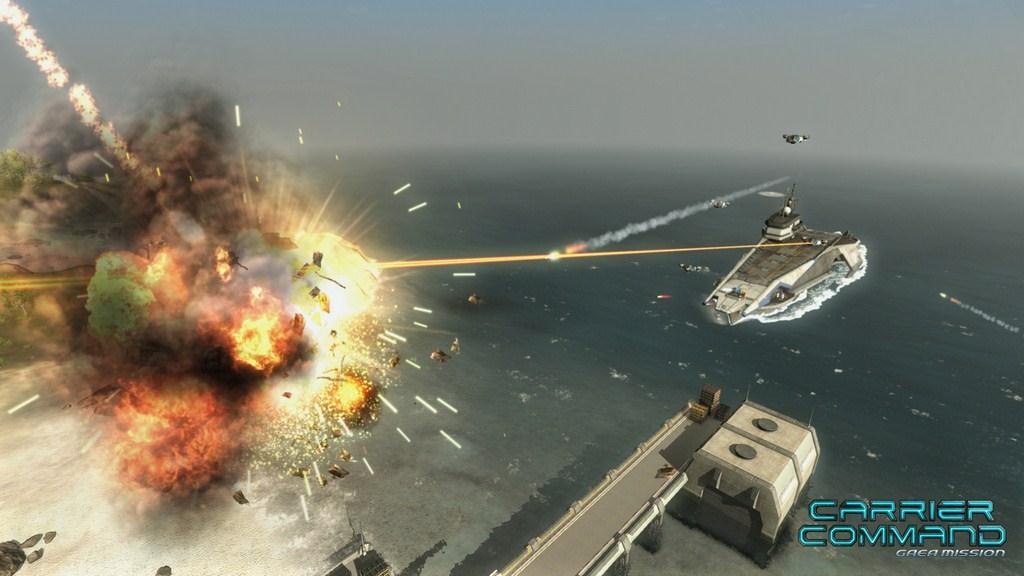 Written by Russell Archey on 11/27/2012 for PC
More On: Carrier Command: Gaea Mission
Back in 1988 a company known as Realtime Games created a game called Carrier Command for multiple home computers such as the Amiga, ZX Spectrum, and Commodore 64.  A crossover between a vehicle simulation game and a real-time strategy game, players were tasked with colonizing multiple islands in an archipelago and destroy the enemy aircraft carrier before they can colonize the archipelago themselves.  The game was well received receiving high marks from various publications, and gaming magazine The Games Machine even awarded it the number one game of 1988.  A sequel was made (Battle Command) and was also inspiration for a game called Hostile Waters: Antaeus Rising, However, Bohemia Interactive has recently released Carrier Command: Gaea Mission, a modern remake of the original Carrier Command.  Did the game hold up over all these years?  Let’s find out.

For starters, I’ve never played the original Carrier Command, mostly because the only classic home computer system I own is an Atari 400 (yes, I’m a classic system collector and don’t own a Commodore 64), so I can’t really compare the original to the remake.  From what I can tell, the main goal of Carrier Command’s campaign is to take control of various islands on the planetoid Taurus in a war between two factions: the United Earth Coalition and the Asian Pacific Alliance.  I say “from what I can tell” due to reasons I’ll get into in a bit.  When I first began the campaign it played like a first-person shooter, which I kind of enjoyed, though it had its flaws.  After finding and taking control of a giant aircraft carrier is when the strategy game portion kicked in.  I had to take an amphibious vehicle around an island completing various objectives to progress the story.  Granted I’m usually not too great at real-time strategy games, but I figured this might not be so bad.

Let’s quickly cover the FPS aspect as there’s not much to it.  You’re basically running around an island at the beginning of the game taking down enemies in your path.  Yeah, typical FPS, but there are a few issues here, the first of which is your gun.  While not a major issue, it kind of surprised me that your gun starts out with around 300 ammo, and the only way to pick up more was via some crates that come way late into the FPS segment, almost to the point it’s not necessary unless you’re completely reckless with the gun and you’re trying to run out of ammo.  At least you don’t have to worry about reloading, but after playing Borderlands 2 so much, I keep finding myself hitting R to reload after taking down an enemy, only to realize there is no reloading.  I was also kind of surprised that you can’t jump…at all.  That little crate or box in your way?  Oh no, you can’t jump over it, you have to walk around it.  The FPS segment isn’t that bad, though the voice acting does leave a bit to be desired, but for a game focused more on strategy, it tends to drag on a bit, and it’s not overly difficult.

Now we get into the strategy part of the game.  After finding the aircraft carrier in the FPS segment, you get to take it to various islands, send out vehicles to scout them and take control of them and…well that’s about it from what I can gather.  Once you begin exploring the island, you’ll notice that the vehicle controls might take some getting used to depending on other games you’ve played.  Instead of using the mouse to steer, the mouse just rotates and fires the turret while the main movement keys move and steer the vehicle.  It makes for quite a disorienting scenario, especially if you accidentally hit a rock or something to make your vehicle go a little vertical and the camera follows it.  The other thing is that the vehicles have a fuel gauge…which is also its health gauge.  Now to be honest, I’ve never seen the fuel gauge drop while just driving around unless it’s so minimal it’s hardly noticeable, but when you take damage from enemies your fuel gauge drops.  The only way to fill it back up is to either go to a repair location on the island or drive all the way back to the aircraft carrier…which depending on where you’re at on the island can be a major pain.  However, if your vehicle or vehicles get destroyed to the point that you can’t complete the mission, then its game over and you must reload the prior save state. 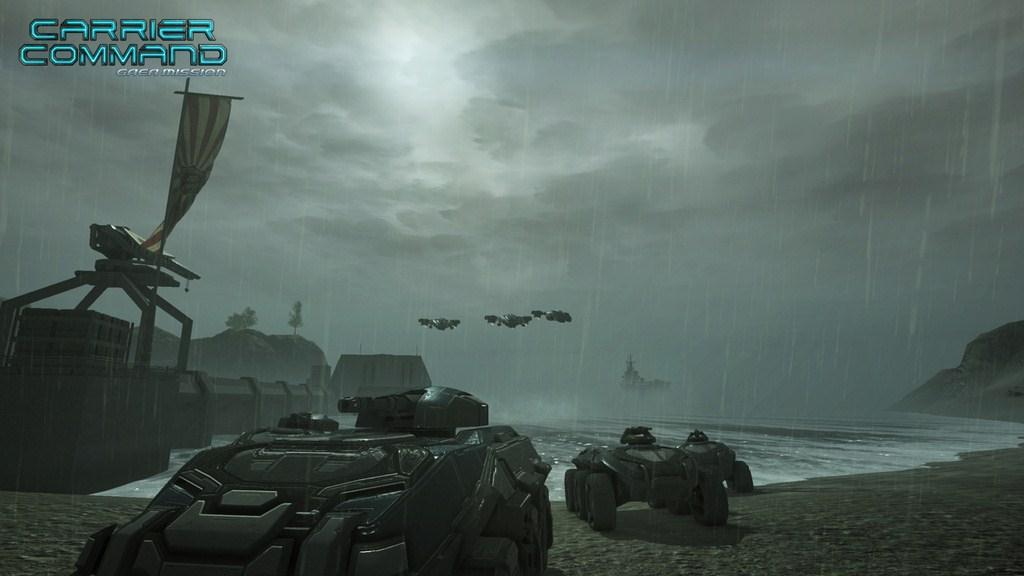 So…remember earlier when I said “from what I can tell” and that I’d get back to that point?  Well, it’s time to explain what I meant.  There are missions where you get to control more than one vehicle by just hitting a number on  the keyboard representing a certain vehicle (in total there are four amphibious ground vehicles and four aircraft, though not all are available at all times).  Vehicles can assist each other through various commands so you can have one vehicle move to a certain point while you control the other vehicle yourself.  This is where the problem lies for me.  When I said “from what I can tell”, I said that because…well, I never made it far into this game.  Now I make every effort possible to complete any game I review, or at least as much of it as I possibly can.  However, there’s one issue with this game that has made it difficult for me to get past the very first island (after the FPS segment).

You’re supposed to take two vehicles to these two towers, have each one positioned by a tower, use one vehicle to activate a tower, switch to the other vehicle, and activate the other tower.  Easy, right?  Well, while I know how to complete the objective, I have no clue on how to complete the objective.  I’ve gotten both vehicles where I need them and have tried every single command the game gives me.  Not only can I not figure out how to activate even one tower after pressing every key on my keyboard, anything else I do just messes up my positioning.  I’ve tried using the Assist command, but more often than not that just makes one vehicle auto-move towards the other, and with the controls as disorienting as they are, it just makes things worse.  I’m sure I’m missing some subtle command to get past this point, but when eighty percent of your play time with a game is spent in the same location with no idea how to proceed after trying literally everything you can, it gets frustrating.  Don’t get me wrong, I like a challenge and I like puzzles, but this is just downright frustrating. 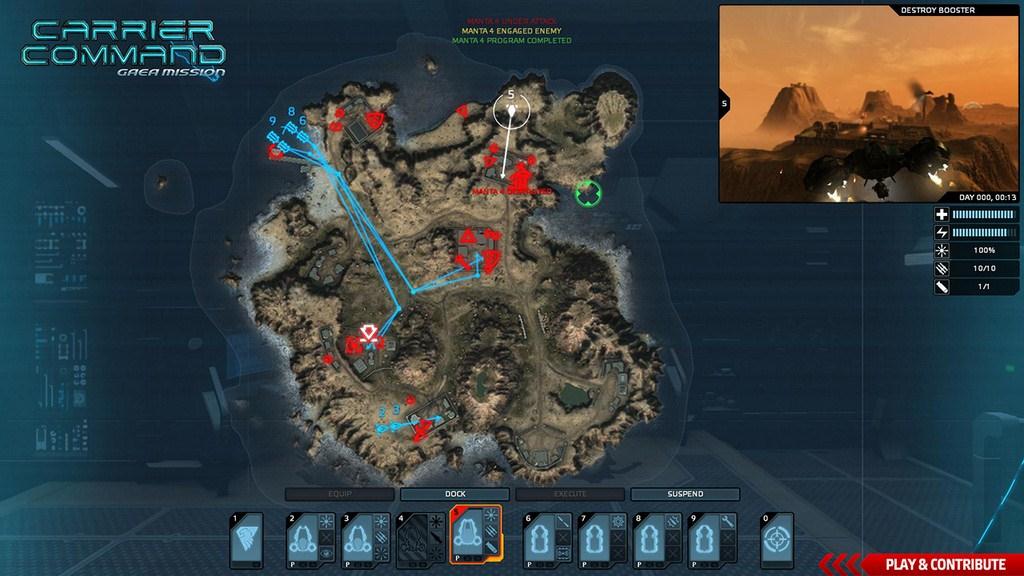 Outside of the Campaign there’s also an option called Strategy.  It basically works the same as Campaign to an extent.  Your faction controls a few islands, the opposing faction controls a few islands, and the rest are neutral.  The goal here is to…well, take control of the islands.  Your carrier has all eight vehicles mentioned earlier available for use, and before starting the game recommends going through the tutorial, which I believe is in the Campaign.  I decided to give this a shot for kicks…and it is painstakingly slow paced.  Now again, I’m not new to RTS games.  While I’m not that great at them, I do enjoy a little StarCraft 2 or Command & Conquer from time to time.  However, in most RTS games I’m typically busy building up my forces and defenses before my opponent comes to completely decimate me.  Here, you travel to an island (which can take some time to do as a lot of it is in “real time”), you deploy your vehicles, you scout the island, and…I’m not sure after that.  I deployed a ground vehicle to scout out things, but basically kept driving into sandstorms or on top of rocks that made it hard to regain control of the vehicle.  When I set out the aircraft, it was more of the same, though I tended to have more fun crashing the aircraft into the carrier just to relieve my boredom.  Furthermore, there’s no multiplayer in the game, it’s just you vs. the AI.  Kind of disappointing.

Overall, I’m not saying that Carrier Command: Gaea Mission is a bad game, but it leaves a lot to be desired.  The Campaign mode might leave you confused, the Strategy mode is a little too slow paced for me, and the lack of multiplayer is really disappointing.  Even as a non-major fan of strategy-style games, there’s still quite a bit left to be desired with this one.  This is one I’d probably recommend checking out the demo first before making the decision to buy it outright.

If you're into strategy games, you might want to check out the demo for Carrier Command: Gaea Mission. Even then though, the game has some flaws and is rather slow paced to make me want to give this game another shot any time soon.