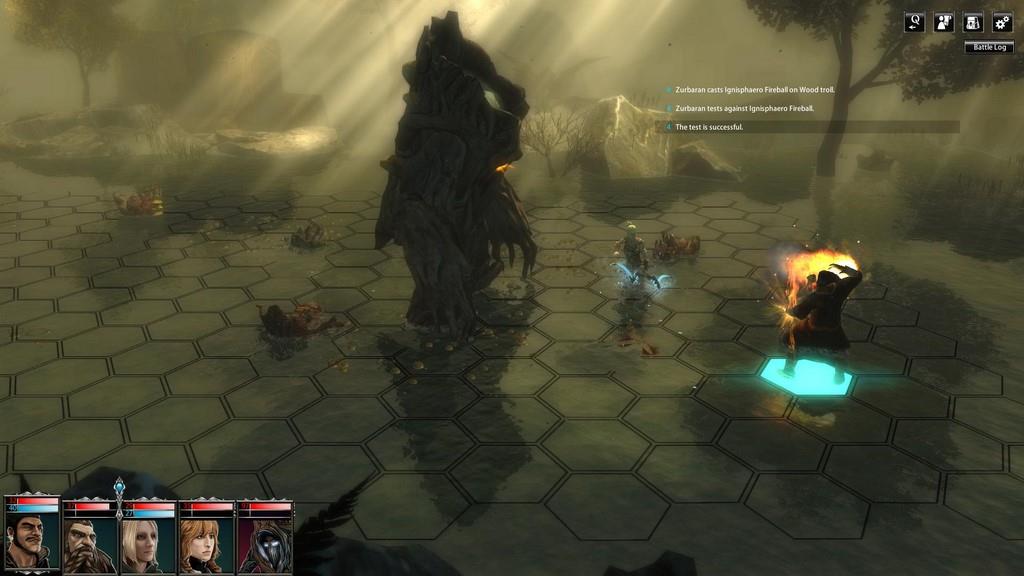 Blackguards is based on The Dark Eye (or Das Schwarze Auge in its native tongue), the bestselling tabletop role-playing game on the German market. The Dark Eye isn't nearly as big in America as D&D is, but there have been several video game adaptations before this one. I hadn't heard of the system before I picked up Blackguards, but as a big pen and paper RPG fan I was excited to dive headfirst into the world of Aventuria.

When you start a new game, you're given the option of playing in Basic mode, where you are given a choice of pre-built characters; or Expert mode, where you build your own character from the ground up. The game recommends that if you aren't familiar with The Dark Eye, or haven't played Blackguards before, you should start with Basic mode. I'm going to echo this sentiment. If you really want to make your own character, I suggest at least playing through the first boss, just to get through the tutorials and having a chance to look at the rules the game follows. Daedalic Entertainment was kind enough to include a rules tab that gives you the rundown on how The Dark Eye system works. It tells you how each roll is made, where the numbers derive from, how skills and equipment factor into your rolls, etc. I love that they give you a reference sheet for the rules, but I wish they would have indexed it better. As it is, the rules are a huge wall of text with bold headlines to break it up. At the very least, a table of contents would have been nice.

For those of you who are interested in the nuts and bolts of the system, here's the short version of how The Dark Eye works: if you want to do anything, you have to make three attribute tests. For example, if you want to hit someone with a sword, you have to pass Strength, Agility, and Courage tests. The tests work similarly to AD&D 2nd Edition, where you roll a 20-sided die and want to get a result lower than your attribute score. If you fail any of those three tests, you miss. But this is where skills come in — say you pass your Strength and Courage tests, but miss your Agility test by four. If you have at least four points in your Swords skill, you can offset your roll and pass your tests to successfully hit your opponent. Yeah, I know. I'm no rookie when it comes to RPGs, but the rules were still a lot for me to take in all at once. I'm just relieved that I had a computer to take care of all the calculations behind the scenes. Also, I'm really glad that Blackguards doesn't have that tacky dice roll UI that some tabletop-based CRPGs have. They serve no purpose to the overall gameplay and completely take me out of the experience. I just need to know if I hit someone, I don't need to know that I rolled a 14 to do it.

Honestly, for running on bulky system, Blackguards does a really good job of keeping combat slim and trim. It keeps all the calculations out of sight, but still makes sure you're well-informed with how your actions effect them. Despite all of the crazy dice rolls, your interaction with them all comes down to a simple percentage. When you want to hit someone, your cursor reveals how likely it is you'll hit them. If you have a 95 percent chance to hit someone, it's a good time to use the Power Blow maneuver that lets you deal a lot more damage at the cost of lowering your percentile chances to the 70s or 80s. 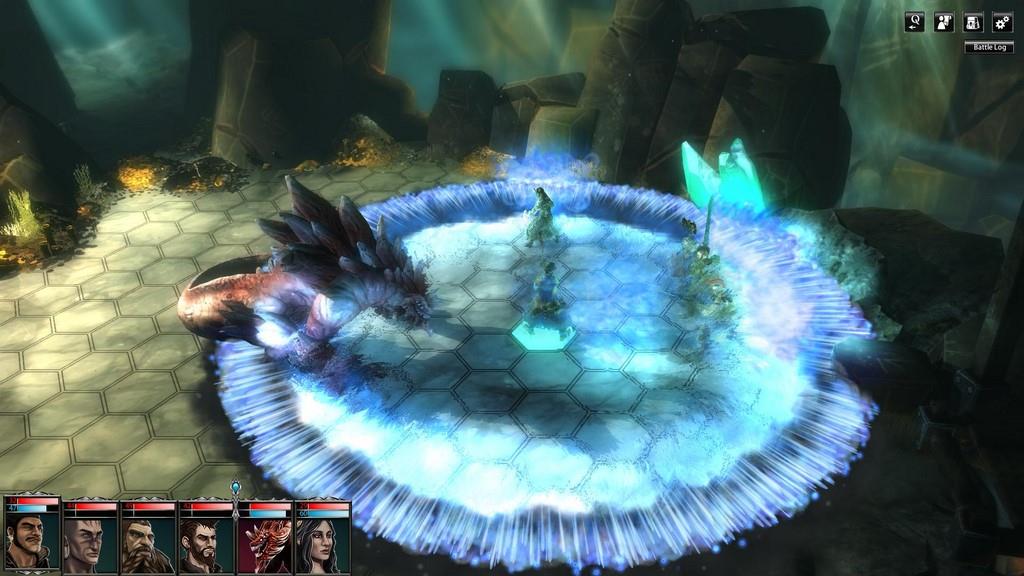 The UI is fairly straightforward and simple. It's unobtrusive, but it also does a lot to keep you informed with what you can do and how likely you'll succeed. But as in any tabletop RPG, each class has its own struggles to overcome. If you are playing a ranged character, for example, the biggest thing you have to contend with is your line of sight. If there's a log, a box, or even another character in your way, you won't be able to fire off an arrow or spell.

The combat is turn-based on a hex grid battlefield, which took me back to my all-time favorite strategy game: Heroes of Might and Magic III. Although in Blackguards, you aren't bulking up your armies, you're building characters that you'll have to care for throughout the game. And the fights don't take place on the same 15 x 11 grid every time. There is a multitude of diverse battlefields with unique and often treacherous features. Most of the battlefields have items that you and your enemies can use. There's traps you can blunder into, barrels you can block their paths with, and buttons and levers that can do just about anything. We're not exactly talking falling skyscraper kinds of dynamic levels, but there's enough to keep each fight memorable.

The combat in Blackguards is brutal. Not only is it easy to stretch yourself thin, but this game is not afraid to throw everything it can at you. You'll get poisoned, burned, thrown into mudpits and beartraps, and get outright killed by the environment — all in the same day, or even the same battle. I was getting my hat consistently handed to me, so for the first few missions I had to keep all my fighters equipped with a shield to give them as much protection as possible. But once I had a few fights under my belt and got into the swing of things, I was more comfortable taking risks in combat. 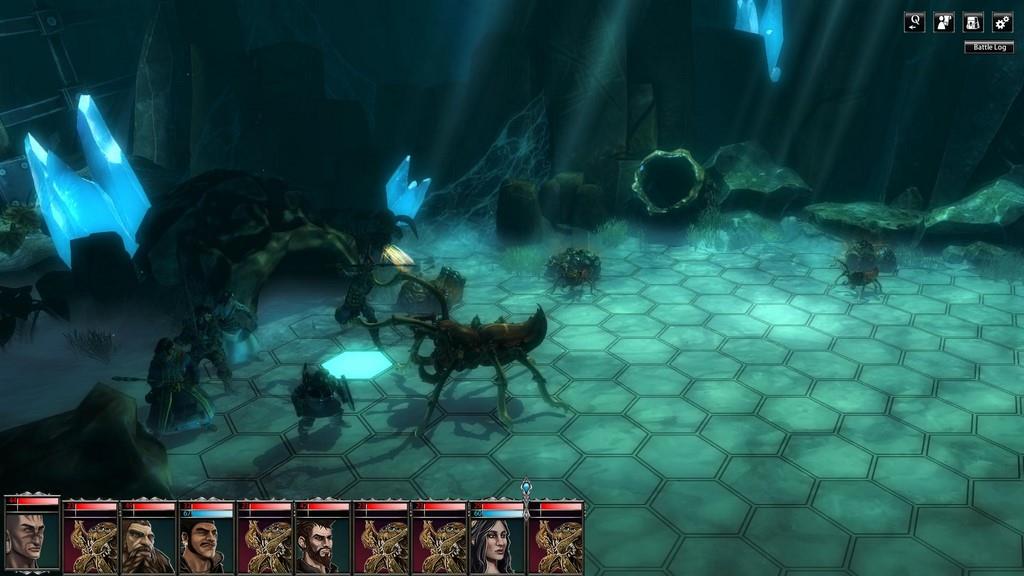 The worst part of combat isn't even taking damage, since hit points are easily restored through healing spells and potions (although both are costly, especially early in the game). The real killer is taking wounds. Wounds give you a -2 to just about every test you make and their penalty is cumulative — having one wound is annoying, but having three is debilitating. On top of that, wounds are difficult to get rid of. You can rest for the night to get all of your hit points and mana back, but your wounds will still be there in the morning. If you have a bandage in your inventory you can attempt to treat a wound with it, but this almost never worked for me, even when a character in my party had 10 ranks in Treat Injury. Pretty much the only reliable way to treat a wound is to go to a town with a healer and pay them to fix you up.

Speaking of money, this game keeps you scrounging for your ducats. It's not like in Skyrim, where if you can go pick daisies if you need some extra cash. Ducats are hard to come by, and supplies are expensive. In the second chapter of the game, I was given 200 ducats to outfit my characters with armor and weapons. I was floored. I hadn't seen more than 50 ducats total until that point. But when you're buying for four fighters, and just a leather shirt costs you 60, those 200 ducats end up being just enough to cover the bare essentials. I hope it doesn't sound like I'm complaining, because I'm really into resource management. I had to be just as conscious of my spending and inventory as I was of positioning myself on the battlefield. There was a time where I spent at least five minutes debating whether to sell a vial of poison for 10 ducats so I could buy a healing potion. Should I go for the easy 15 hit points, or cripple my enemies so they had less chance to hit me in the first place?

As much as I enjoyed the combat and resource management, what instantly attracted me to Blackguards is how gorgeous it is. The first time I looked at the overworld map, I had to take a minute just to sit back and appreciate it. The battlefields are vivid and diverse, each town has its own distinct characteristics and flavor. They all have a different setup of shops, different inventories, and some of them have multiple districts.

Actually, I loved the maps and towns so much that they became my biggest problem with the game. The towns are really pretty, but they're just glorified backgrounds. All of the non-combat sections are set up like a point-and-click adventure, so your interaction with the world is severely limited. Also, the only way to get from one town to another is to fast travel. It takes just as much time to cross the entire country as it does to hop on over to the neighboring village. It's nice if you're doing a speed run, but only having fast travel keeps you from getting any sense of scope and exploration, which, to me, is just as much a part of an RPG as the combat. The world is so beautiful, and the game is keeping me from exploring it. But maybe I've just been spoiled by open-world games.

You can easily sink some serious hours into Blackguards. I had been at it for 10 hours before I finished the first chapter. Granted, a couple of those hours were spent reading and playing with the mechanics of the game. If you're looking for a turn-based strategy with brutal combat that's going to keep you on your toes through every battle, and you're into managing a team of characters' skills and inventory, Blackguards is just what you're looking for. My only real hang up is that the gameplay falls short outside of combat scenarios.

If you're looking for a turn-based strategy game with brutal combat, and you're into managing resources for a team of characters, Blackguards is just what you're looking for. It's a gorgeous game with memorable battles. But because the game's focus is obviously on combat, no matter how pretty the towns are, they feel like backdrops for your character sheets and inventory.