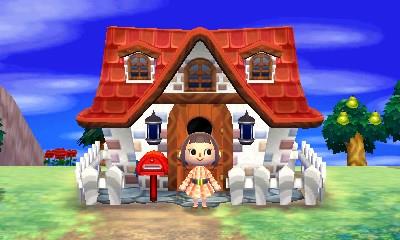 Written by Matt Mirkovich on 6/7/2013 for 3DS
More On: Animal Crossing: New Leaf
Animal Crossing exists in a weird place for me. I played it quite frequently back in the GameCube days, though my girlfriend at the time much more in to it than I was. But once I started unlocking NES games and got my house paid off I started to enjoy it, we'd swap NES games, decor, clothing, even swapped fruit so we could grow trees in our respective towns. Then the awkward break-up happened, and I lost all drive to play it, my town covered in weeds, long forgotten to the march of time. I never visited the Wii or DS versions of Animal Crossing, always wary of their siren song that ate up hours at a time, all in the name of paying off that dastardly raccoon. I'm talking about Tom Nook, the character that keeps you locked in debt for a majority of the Animal Crossing experience. That real estate shark was my biggest fear going in to Animal Crossing: New Leaf, and he is everything I've come to be afraid of.

New Leaf is starts off with a major twist. Tortimer is gone as mayor, guess who's filling in for him? YOU! That's right sucker, this job's yours now, and Tortimer's off to the tropical islands to live the high life. So you're the new mayor in town, what does that actually entail? Not a whole lot surprisingly. You have say in who gets to live in your town, and you can customize your town at the cost of some bells (the franchise's currency), placing items like benches, bridges, lampposts, and other decorum around your newly inherited town. There are also ordinances that you can enact that allow you to modify how the town itself operates. Need to boost your bells? You can set up the Bell Boom ordinance that allows all items to sell at a twenty percent increase, which is a boon early on as it lets you get some of those expensive home modifications that Nook likes to throw your way done relatively quickly. You can also affect when events take place, either earlier or later in the day, or encourage your subjects to plant more flowers to help your town look more beautiful. 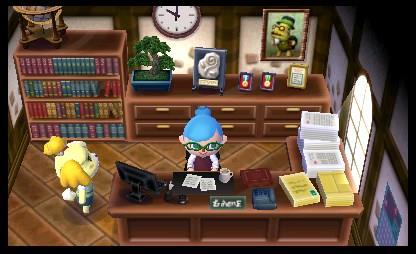 All of these things come at a cost of course, leaving you with more money sinks than ever before in an Animal Crossing game. The public works decorations all get their money from donations, but you'll be contributing the lion's share of bells, and the ordinances take a flat twenty thousand bells to get started. The ordinances are actually fairly cheap for the effect that they have on the town, but it's just more money management that you'll have to deal with. There's plenty of ways to earn bells though, from the lowly chore of fruit picking, fishing for the denizens of the deep, to digging up rare fossils that can go on display in the town's museum. Bells are very much an easy come, easy go currency, it's just up to you as the player to put some effort in to getting them, though a number of tasks that yield the highest number of bells can eat up hours of time. I know this because I think I've logged more hours on the tropical island doing fishing and diving trying to get some sharks and other rare sea fare since they bring in the most dough.

There's also a great deal of minutiae that occurs in the day to day events of the game. Townsfolk will constantly be looking for you to solicit your opinion on a number of things, from what they say to how their clothing looks, and will sometimes even threaten to leave, and it's your desire to see them stay that keeps them as residents of your town. Or they might ask for something as simple as a letter, which you can drop off at the post office. And while you're there you can pay Tom Nook's ever growing tab via the town ATM. There are also events that happen sporadically as the game starts to open up. Joan the sow will be buy every Sunday with her haul of turnips, that I have yet to sell because I thought ninety one bells a pop was a decent deal. There's also the wandering art dealer fox, the home decor camel, and what looks like a boy scout beaver who hands out medals which act as the game's achievements.

It's hard to tell when a game like Animal Crossing: New Leaf ends. After paying off the debt to Tom Nook it's just a matter of shaping the town to your liking, and collecting the incredibly large number of knickknacks that you can can be used to decorate your house. There's a housing agency that rates your house on the daily and assigns it a score, though without much feedback on how other users are doing, it's kind of curious as to why even have it in the first place? Self-satisfaction I suppose? Speaking of other users, get ready to start harassing your friends more than ever with requests for items, fruits, or help with some troublesome townsfolk. It's easier than ever to set up a connection with friends, be it locally or over an online network, you'll be at a friend's town in little time. Up to four people can occupy a town at any given time, and the multiplayer extends to the tropical island, with mini-games, called 'tours' that anyone that's visiting the town can participate in. These tours usually involve some sort of activity you already do, like fishing or diving. 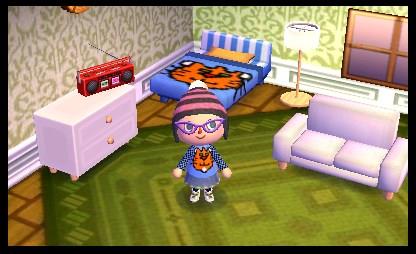 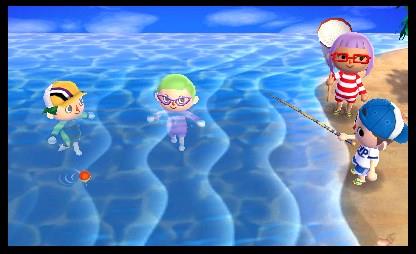 I get that Animal Crossing has never been big on visuals, very cartoon-y and such, and the visuals on the 3DS are nothing amazing, but they fit the style perfectly. The 3D effects look great, but don't add too much to the experience, honestly I played with 3D off more than on. Audio is actually really strong in New Leaf. The Kazumi Totaka (or Totakeke or K.K.Slider) tunes are really spot on, and  fit in pretty much every scenario. The gentle main theme takes on a slightly different sound when it rains, making it an even more relaxing song, and it's little touches like that that enhance the experience. K.K. Slider also returns as a character, though you won't find him initially, it'll take a little bit of work to get him to show up, but it's well worth the effort to see him at his new gig.

A game like Animal Crossing: New Leaf will be fun for many gamers out there, but the level of enjoyment is obviously going to vary from person to person. In my case I got the most satisfaction out of completing the museum collection (and hearing Blathers the curator say 'yes') and collecting the rare items that come from fortune cookies. Another friend of mine has tricked out her town to be a floral wonderland. I'm curious to see what other people do, but I don't know how long this game will keep my attention after I finish my museum collection. The thing this game does have going for it, or against it, is that it opens up very slowly. I've been working on this review for nearly a month, and to date I haven't fully opened up each shop on the main street, but I've got almost all my debt paid down, and I've funded a Reset Center, which houses everyone's favorite orator, Mr. Resetti, and I'm curious enough to see what else is coming down the line.

Even though I played Animal Crossing over a decade ago, it doesn't feel like a whole lot of things have changed in New Leaf, despite the title. The mayoral duties are another money sink, the townsfolk are still just as needy, and Tom Nook is still a bastard. At least he's a lot less forceful about expanding your house now. But Animal Crossing is still a pretty endearing experience, and New Leaf being on a handheld console gives you plenty of opportunities to just pop in to the game for a few short minutes, accomplish a task, and then go back about your business. Just watch out for that abysmal 3DS battery life, otherwise you'll be seeing Mr. Resetti a lot more frequently than before.
It's Animal Crossing through and through. Though New Leaf doesn't add a whole lot of 'new' stuff, it is still an enjoyable experience, just watch out for that troublesome 3DS battery life.