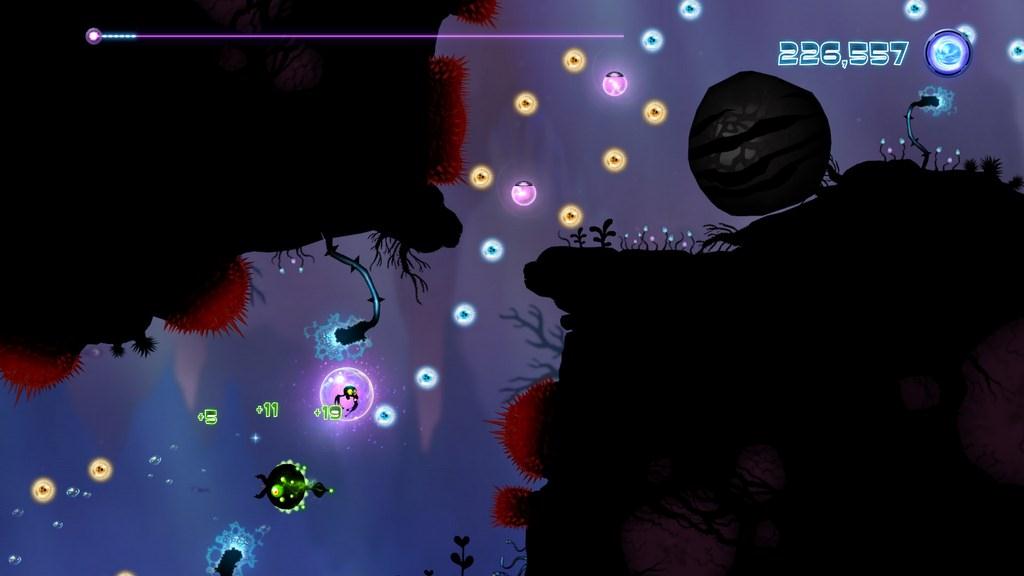 Written by Nathan Carter on 4/3/2013 for 360
More On: Alien Spidy
At first I wasn’t entirely sure what to expect with Alien Spidy. I started the training levels and learned the basics. I learned the game mechanics, the power ups, the scoring system, the enemies as well as well the objective of the game. I thought "Hey I've got this in the bag. Top of the leaderboards here I come!" Oh boy... was I wrong. Dead wrong.

For story purposes you are, as you would expect, an Alien Spider who has crash landed on the planet earth. Your task is to collect the pieces of your ship and get back home. From the players perspective, your job is to navigate the endless death traps on each level and make it to the exit. You also collect orbs that increase your score as well, which is the most important objective of the game. Just like smaller games like Angry Birds and Cut The Rope, you are given stars for your score in each level. The higher you score, the more stars you get, however this task is easier said than done. Everything you do in this game affects your score. You earn points based on how much time you spend in the level, the amount of orbs you collect, number of orbs you collect in a combo, and score multipliers scattered throughout each level.

You will also encounter many obstacles that can lower your score. There are orbs that take points away from you and every time you die, you lose points as well. There are numerous power ups in each level which gives you abilities like a massive jump, the ability to run lightning fast, bubbles that protect you in water, and many others. The duration of these power ups however depend on how much power you have stored up which you can get via additional power ups. While they are fun to use, they can get a bit annoying if you don’t have a lot of power stored up. Without a good reserve, they will most likely only last for 1-2 seconds and these power ups are needed to help you access higher platforms or overcome gigantic apples or rocks coming at you. If you screw up and waste the power, you will find yourself restarting at the previous checkpoint and losing points in the process. Get used to restarting at checkpoints because you will be doing it a lot.

Since you are a spider as you would expect you have the ability shoot out your web and swing in the air using the right thumbstick. Most points orbs you encounter in the game will involve you shooting out your web, attaching it to a surface and riding the momentum though multiple orbs in the process. On later levels the web becomes your saving grace as you will constantly have to shoot your web, swing and ride the momentum over death traps and to get to platforms in the game you normally couldn’t reach via jumping. Swinging like Spiderman through the level can be fun but it can also be extremely frustrating. I just couldn’t get the hang of it but I often found myself shooting out my web and completely missing the target, dying in the process. It just feels like the web never shoots at the direction you move the thumbstick. Your margin for error in this game is pretty much zero as swinging from surface to surface will likely get you killed by missing surfaces and plummeting to your death. The areas you have to hit with your web are very small most of the time to it's an exercise in trial and error. One would expect nice, tight controls with any platforming game but sadly that’s not the case with Alien Spidy.

There are 69 levels spread across three stages and they only get harder as you progress through the game. Even by the end of the first stage, the forest stage, I had a hard time finishing levels. Checkpoints come quickly but you will often find yourself repeating the same small section of a level over and over again due to a few tricky swings. There are times when you are moving so fast that it's impossible to see what's coming up. I often found myself free falling after a swing unable to comprehend what I was supposed to do next, dying and losing valuable points in the process. This unfortunately is where most of my frustration comes into play with this game. I would rack up a great score and then get stuck on one part of the level watching my score drop to a pitiful amount, rendering all the work I did useless. I would then have to redo everything to get another high score. Unless you have lightning quick reflexes and the ability to know exactly where you need to swing in levels you are going to have a tough time racking up a high score on a single run. I feel like getting a high score will mostly come down to luck above all else. Scoring, however, is the least of your problems. 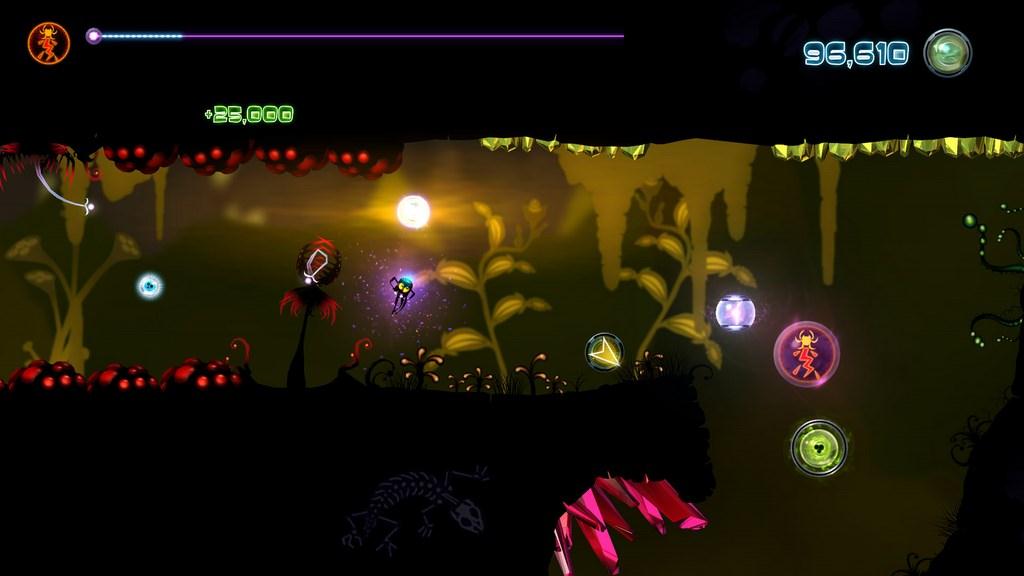 My biggest problem with the game is how you advance to different courses. There are three courses in the game. Forest, Pond and Caves, and the only way to advance to newer courses it get a minimum amount of stars. The stages are hard enough as it is, so this means you are going to have to painstakingly go back to previous stages in order to get more stars. This means that you will be playing earlier stages over and over again as one simple mistake completely destroys any chance you have of advancing through the game. To make matters worse, the minimum amount of stars you have to collect is ludicrously high for unlocking many later stages. I completely understand in games like Angry Birds and Cut The Rope that you need to earn more stars to continue, but those games are short and its easy to go back and try to earn more stars. While Alien Spidy doesn't’t have long levels, they are long enough that repeated play of them to try to earn stars becomes an annoyance. Maybe you will find enjoyment in replaying levels to get more points and earn more stars but for me, I honestly felt like ripping out my hair after constantly dying and failing to achieve a high score to get more stars even on the easy levels.

Probably the best part of Alien Spidy is the absolutely gorgeous graphics with colorful backgrounds popping out in HD. The world also has a nice charm to it as well. The characters, stages and even enemies are really cute and entertaining to see in motion. I generally felt sad for my little alien spider as he was picked up by a bat and eaten. Since you are a spider the game does a great job of showing your little spider up against a gigantic world of hazards we wouldn’t realize such as mushrooms, thorns, puddles, bees, fish, ants and plenty of other things we, as larger humans, overlook every day.

It's a shame that the experience ended up like this because at first I was having a lot of fun with Alien Spidy. Then I just kept dying and dying and dying till the point where my blood was boiling. I tried to go back and increase my score but most of the time, I actually kept getting lower scores than my first time through the level. Even though the game is only $10, its really hard to recommend this to anyone except those with the patience of a saint.
Alien Spidy is a very cute game. Its charming, has beautiful graphics, great music, simplistic and challenging game play but that fun experience can really turn to extreme frustration at the snap of your fingers. Alien Spidy is a great premise for a game but the extreme difficulty, inaccurate controls, and ridiculous level advancement requirements really hinder what could have been a great game.