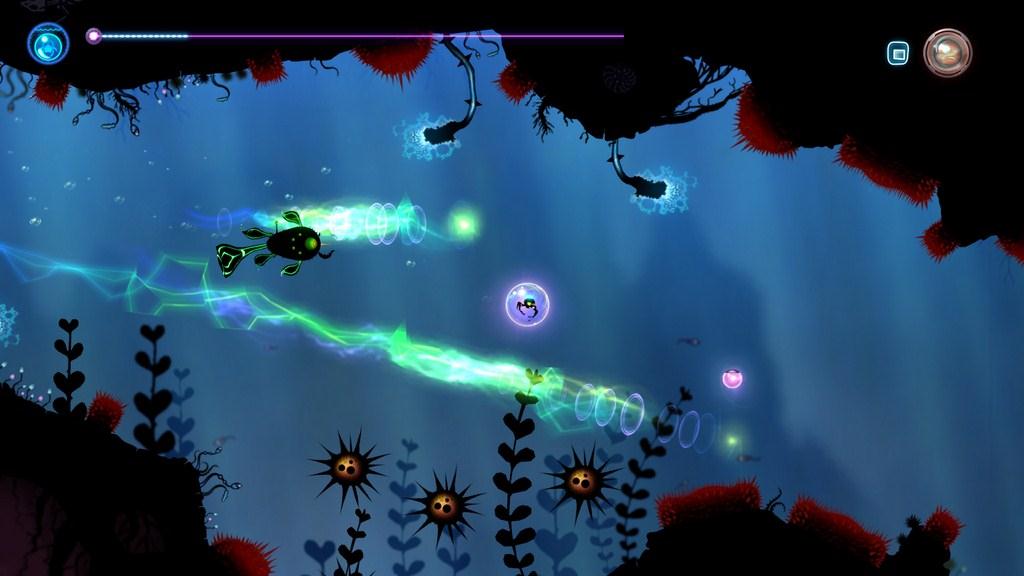 Written by Sean Colleli on 10/10/2012 for PC
More On: Alien Spidy
There’s been a huge resurgence in the 2D platformer genre in recent years, so much so that it’s actually getting hard for new games to stand out in a genre that was practically on life support only a few years ago. Nintendo practically murdered old school platforming when Mario 64 shifted the focus to 3D adventure focused platformers, but recently they revived it with modern classics like the New Super Mario Bros series, Donkey Kong Country Returns and Kirby’s Epic Yarn.

The indie scene, however, has been far more interesting than the mainstream retro revival, and while these titles might not be as polished or precise as a Mario game, they’re definitely more creative and many magnitudes more challenging. Super Meat Boy, And Yet It Moves, Limbo and even a pretentious slog like Braid are all pushing the boundaries in a genre that was long thought to be artistically dry as a bone in the wake of the 16-bit consoles.

It’s nice to see, then, something like Alien Spidy—a game relatively simple in premise and execution, but rich in charm, gameplay and challenge, without being murderously difficult like Meat Boy or the upcoming Cloudberry Kingdom. Developed in-house by Enigma Software and published by Kalypso Media Digital for the 360, PS3 and PC digital platforms, Alien Spidy has been making the rounds on the convention circuit and will be ready to launch soon.

The game concerns the titular Alien Spidy, who belongs to a species of advanced alien bugs who apparently enjoy cosmic exploration. Spidy’s girlfriend Virgi decides to explore none other than the planet Earth, but when she doesn’t report back, it’s up to Spidy to head planetside and go looking for her. It’s a pretty basic setup but I like that they didn’t just have Vergi get kidnapped by some Bowser or Robotnik stand-in; she’s just missing, so Spidy doesn’t necessarily need to rescue her, he’s just worried. For all he knows Virgi’s been smitten with some terrestrial jerkass arachnid.

Alien Spidy builds on a relatively simple premise with some killer art direction—the game is gorgeous. It uses predominantly dark-colored foregrounds like black outlines of leaves, grass and rocks, while the backgrounds have the more vibrant palette of smoke, fog, glowing lights and sunsets. This makes the actual game elements—enemies, hazards, pickups and Spidy himself—really stand out, while giving the game a small, intimate atmosphere that makes you feel like a bug in an expansive backyard.

And make no mistake, Spidy is the size of a bug—he’s tiny! And the world he inhabits is enormous. Many other games have used this gimmick—Mushroom Men, Deadly Creatures, even Pikmin—but the abstract art style and gameplay here keep it fresh. Spidy also happens to be one of the cutest, goofiest and most expressive platformer heroes in recent memory, with a lot of funny idle animations. His googly little eyes are always darting about, he’ll flex his tiny arms and wipe his brow after a particularly strenuous level. 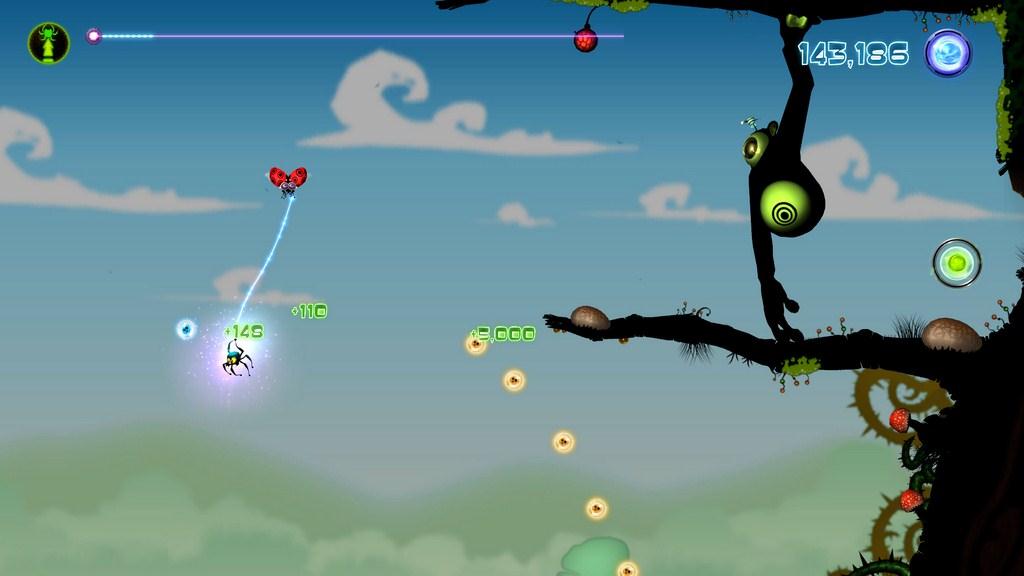 Speaking of strenuous, you’ll get your fill of challenge with this game. The game employs an interesting hybrid of control and movement styles. You’ll run and jump as usual, but the right analog stick lets you shoot out a webline in any direction and control its length once attached, while the left stick controls basic movement for running and swinging. Webbing is integral to traversing the world, as is using proper momentum. It’s appropriately similar to all those 2D Spider Man platformers that only got good at the web-swinging recently on the DS.

As with any good platformer proper movement is paramount. Alien Spidy is all about racking up the points, which is uncharacteristic of a modern game to say the least. However, those points aren’t just for bragging rights—each level has a challenge rating, and if you complete the challenge you unlock the extra challenge level in each world. Points are gathered by collecting floating orbs in the environment, usually in order and with proper timing to achieve multipliers. The game has a distinct retro rhythm to it, where timing jumps, web shots and swings are just as important as avoiding hazards. 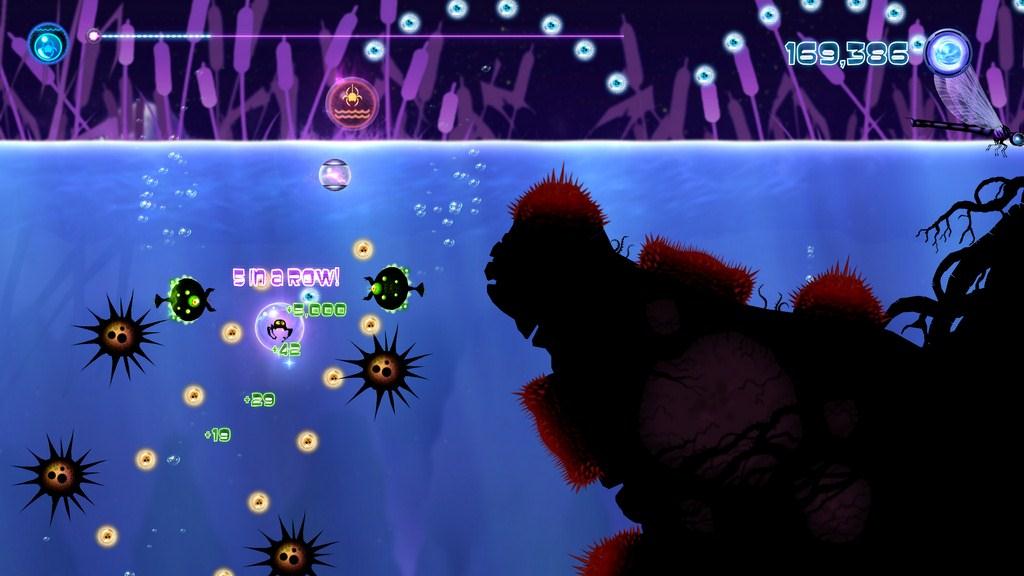 There are plenty of hazards in the world too, running the gamut from hostile bugs and animals like hedgehogs, to the more mundane spike pits, water puddles and toxic mushrooms. Some enemies can be webbed onto, like hovering wasps and ladybugs, to augment the level path if you’re good enough to hit them with a web. Others, however, will cut your webline and ruin your timing or send poor Spidy to his death. Luckily checkpoints are very numerous and you can respawn indefinitely, but each respawn robs you of whatever points you’ve accumulated since the last checkpoint.

In fact the game has a persistent challenge mechanic that gauges how much time you take and awards (or detracts) points accordingly; each checkpoint is color coded to give you an idea of how you’re doing, with green for good time and red for falling behind. The levels themselves never reach controller-through-TV frustration, at least not the ones in the preview build I played, but if you want to unlock everything then Alien Spidy will give you the challenge you’re looking for.

There isn’t a solid release date yet for Alien Spidy but hopefully it will be available in the next few months.  I can tell I’ve just scratched the surface with the few levels I survived, but Spidy has me hooked with both his adorable personality and his challenging world.

(Update) - This game will not be coming to the Vita.