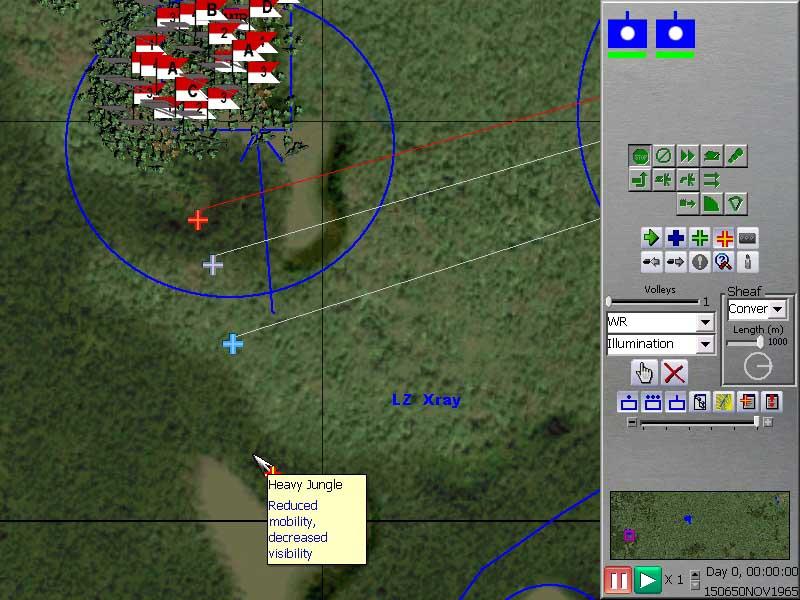 Written by Tom Bitterman on 3/30/2007 for PC
More On: Air Assault Task Force
“Chop chop chop” – it’s been called the sound of Americans at war. Helicopters have a special appeal to a nation that likes its strikes surgical and its wars bloodless. The copter comes in at treetop level, the rotors chopping to foreshadow death. Special Forces drop out without the copter even touching the ground (how cool is that?) and set up a perimeter. Two days later and 40 miles away, the copters pick up our heroes in an isolated clearing. The secret enemy HQ has been destroyed, the naïve farm boy has seen the face of war (and is grimly determined to see it through to the end), the guy with the pregnant girlfriend has a minor leg injury and will get to go home, tough old Sarge has paid the ultimate price (but saved the platoon by his heroics) and the narrator is sadder but wiser. This stuff writes itself.
The game itself is a fun survey of modern airborne history. The definitive game of ancient airborne warfare has yet to be made. The scenarios cover Vietnam, Somalia, and Afghanistan. This provides a wide variety of terrain to fight in and brown people to shoot (you don’t get to play both sides in any of the included scenarios).
Time passes in a continuous-time kinda way, with the ability to pause and give orders at any time. As always, this is welcome. The AI has some ability to act upon orders, but it can sometimes act strangely and it is handy to be able to make corrections. Of course, running away when your copters clear some trees and you suddenly see the enemy RPGs can be a priority.
Your units are battalion-sized and below (companies and platoons). They are capably handled in a hierarchy tree where you can see who reports to whom and rearrange them. Units are represented with a very basic military-style symbolism. It can be confusing at first but experience will make it second nature.
A lot of things in AATF are that way. The game aspires to a West Point-level of detail. Standard unit symbolism, terminology, tactics, photo maps, contour maps, briefings and lots of other details feed the illusion that you’re using a mission-planning simulator. One could easily see cadets using a program like this to learn how to plan out air assaults.
Each mission has the same basic structure. Read the mission briefing and check out the map to get the lay of the land. Review your troops. Come up with a plan and assign orders to each unit. Let time run for a while and make adjustments. The challenge of the game is not in learning how to use the new unit in this scenario, but in the application of sound tactics.
There is some variation in force composition between missions. You’ll have not only infantry and copters, but also indirect fire (artillery) and bombers, depending on mission. Combined arms tactics will be the key to success in mixed-arms missions. Woe to the commander who orders a unit to patrol an area that he has called an artillery strike on!
The game helps with what initially appears to be an overwhelming task of coordination. Each unit has a menu of missions appropriate to that type of unit. Want one unit to lay down suppression fire while another sneaks up from the flank? Just a few clicks. Even telling a copter to go somewhere, pick a unit up, fly somewhere else, and drop it off is a basic action – the ground unit may even move a bit to get to the pick up zone. These orders are implemented as well as I’ve seen in an RTS, and better than most. Which means that they mostly work.
There are many other positives about this game. The tutorial is excellent. It supports multi-player on a pretty decent web site. There are editors for users to create new scenarios. The second version of the ATF Engine is much better than the first version – the friendlier and more intuitive interface is welcome. The 130-page manual is fantastic. Not only is the game explained in detail (including every button in the interface), but there are notes on tactics and nice pictures of tanks. The CD contains two Army manuals on air assault tactics, and naked pictures of the developers’ wives. Well, maybe not that last one.
AATF is not without its faults. The graphics are primitive but functional. The controls can be touchy – it can take a lot of clicks to select the exact unit to get on a copter, and there is no feedback when it fails or why.
A more subtle fault is that air assaults tend to take place in asymmetric conflicts (note the scenarios). Smaller asymmetric combatants avoid set-piece battles. They have to; they have little or no conventional military power. Treating those conflicts as military conflicts is misleading. The military part of the war is not the most important, or decisive. The designer muses on these points at the end of the manual. We may be in for a treat if he builds a game around them.
High on realism, complexity. Low on graphics, sounds, broad appeal. Will appeal to a niche. Deserves more sales than it is likely to get.