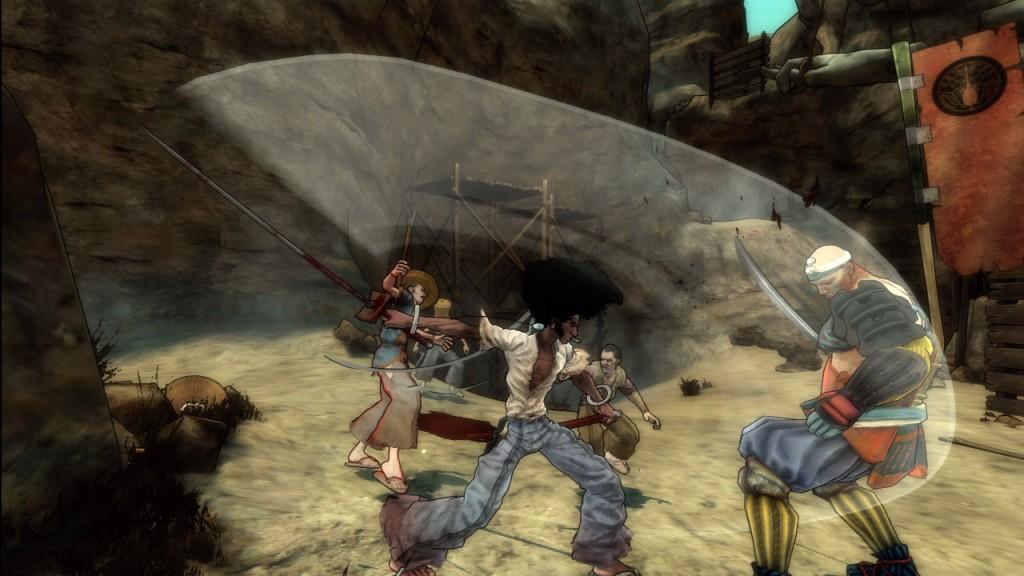 Written by Randy Kalista on 3/13/2009 for 360
More On: Afro Samurai
The soundtrack artist V. Ran puts it best as he raps “When the smoke clears there’ll be no more tears.” And while Afro Samurai’s story has more touching moments then you’d expect, make no mistake: the eponymous anti-hero is here to kick up dust.

Based on the animated series produced (and voice acted) by Samuel L. Jackson, Afro Samurai the video game is an unquestionably faithful tribute. To wit: It’s a blaxploitation aficionado’s dream come true with a Tarantino seal of approval spilled out in generous arterial blood spray. While set within a sometimes steampunk medieval Japan, there are allowances made for hip hop, cell phones, and cybernetics. The anachronistic touches are executed with a knowing wink from the series’ developers

Meted out along the business end of an always-bloody katana, Afro’s wheeling journey is fitted into nine separate chapters that spiral outward from an epicenter of vengeance. But, like any good parable about a dish best served cold, in the end, Afro Samurai concedes redemption over revenge. Still, it’s a successfully bloody rollick in the meantime.

The issue that surprisingly emerges is from, believe it or not, developers that are perhaps overly familiar with the property being worked on. The game is a retelling of the series—with no new storylines for the fans—but is also popped out of socket for newcomers. At best, anyone using the video game as a foot in the door will get the gist of Afro Samurai’s foul-mouthed, cartoonishly-violent universe, but they’ll be called upon to use their imagination to fill in the out-of-context blanks.

When and where events take place is given less priority than the individual (and enticingly encrypted) stories of the cast. Some of these vignettes expose vile criminals as the criminals they are. Some fall under deliciously ambiguous territory, leaving you wondering if Afro’s wordless, uncompromising sense of justice is misplaced.

Anyone and everyone in Afro’s way is subject to being cut to ribbons. Rare is the exception. This is a simple and nourishing beat-‘em-up, made even more memorable through the quota-filled amounts of cussing in the script, the oil-slick choreography of Afro’s move set, and the head-bobbing beats supervised and inspired by the Wu Tang Clan’s super-producer RZA.

The soundtrack is often a brave conglomeration of Japanese string, wind and percussion instruments, sliced and diced with record scratching, punctuating the smooth onscreen blood smears with staccato raps from the unknown—but talented—V. Ran. RZA (who took on supervision credits, but skimped on the licensing nightmare of getting the show’s original soundtrack onto the video game) has his kinder, gentler thumbprint on the score. When a staged battle is bookended by the rattle and bass of a Ginsu-invoking rap track, the effect can be dramatizing. But it’s not all hip hop braggadocio, as plenty of downtime courses through the soundscape. This is one of the easiest nominations for soundtrack of the year we’ve ever made.

Aural backdrops aside, the platforming and map structure that Afro plots his vengeance on are as sketchy as the art style. Sure, every angle and every possible screenshot is examined with a painterly eye for facade details—while exploration off the beaten path is shallowly rewarded with the occasional life-filling teddy bear (a curious trope made clearer through Afro’s relationship to little orphan Otsuru). And clean racing lines even exist between point A and point B on some maps, but things often go awry when verticality is called into play. Afro’s jumping, wall-running and pole-swinging are worth more than a few cusswords of your own. Certain stages, no matter how picturesque, are rendered tiresome due to overlap, backtracking, overuse, movement hitching on bothersome geometry, glitched breakaway platforms, wall-running when you want to leap upwards, leaping upwards when you want to wall-run, water sometimes killing you, water sometimes not killing you, and ledge-falling that’s arbitrarily deadly or not. The rules dubiously flip-flop from location to location.

With all that tripping up your progress from time to time, it’s easy to forget the purpose of such movements until Afro runs across a sometimes-hidden murder of crows that reminds him of his ultimate goal:

To ensure that “Justice” is served.

Justice is a snarling, cigar-smoking, six-gun toting, Wild West baddy with the Number One Headband tied around his ten-gallon hat. The Number One Headband escalates the wearer to that of godhood—though immortality is called into question by whoever dons the Number Two Headband. Ever since Justice orphaned Afro as a young boy by killing Afro’s Father, the impetus for revenge has hibernated in Afro. But that winter is over, and Afro is on the warpath.

Afro’s weapons and uniforms don’t change during the course of the game, but he’s instead rewarded with small trophies adorning his person: a cigarette added to the corner of his mouth, an afro pick tucked into his billowing hairdo, the Number Two Headband tossing with reckless abandon in the wind, all gained after certain chapters of events, though often those chapters conclude with subdued fanfare. And as you pick up those mementos marking the disjointed storyline’s progress, the blade-heavy combos begin to settle into your fingertips. The combat is fast, furious and formidable (the stats screen keeps track of gallons of blood spilled), and Afro is increasingly beset with enemies utilizing wolf-pack tactics. Don’t let the enemy see your back, or the HUD-less indicator that Afro is dying—a red tinge to his outfit—will begin to wash over him, and have blood swirling in his muffled ears. And while the opposite would be fruitless, the presence of too much story in too little time can sometimes have the same swirled, muffled effect on a player.
Afro Samurai might’ve been a rare instance where form could win out over function. But overused (if gorgeous) set pieces, deep (if piecemealed) storylines, and epically multi-stage (if angering) boss fights taint the beautiful blaxploitation brilliance. But the wholesale dismissal of Afro’s unique vision and execution would, nevertheless, be a regrettable mistake.