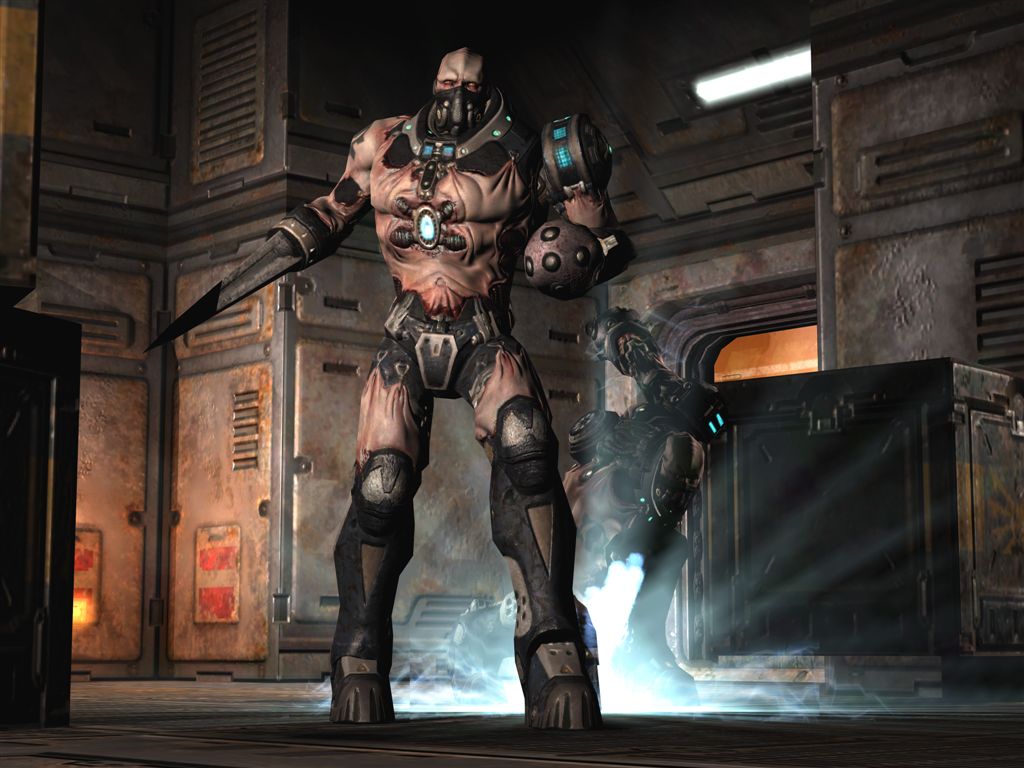 It’s been many years since I’ve played Quake II. I actually still have the original package sent to me by Activision for review. With my recent purchase of the Xbox 360, I was asked to review the true sequel to the iD classic. What we have here is a good PC title that’s really a disappointing port to the next-generation console.

Quake 4 is developed by Raven Software and follows the events after you took down the Strogg leader by yourself in Quake II. You’ll be playing Matthew Kane of Rhino Squad. Separated from your group, you’ll battle your way back to your comrades and then on to taking down the Strogg at their homeworld. Through it all you’ll battle you way through various Strogg enemies, ride various vehicles, partake in assimilation, and earn your stripes by taking out Earth’s enemies.

I do most of my FPS gaming on a computer with a mouse and keyboard but I have experience in console games with a game controller. It does take some getting used to and finding a good sensitivity to the thumb sticks that you are comfortable with. The game does feature some auto-aiming help so if you’re an amateur in using the controller you’ll be able to hit the guys with your aiming reticule in the general vicinity of the enemy.

On the 360, the game overall looks pretty good. If you are expecting improvements over a PC then you’re going to be disappointed unless you compare it to a mid-range PC. Characters are modeled well with a good number of polygons. The enemies do shine though as they are very diverse. I really liked the various end bosses as they exhibit some very creative shapes and movements. Animations are really well done with fluid movements. The way some of the enemies move, they can really give you a scare with their quick actions. Since the game is built on the Doom 3 engine, the style will be very familiar but you do get a lot better look at the details in the models with the brighter level designs.

While Doom 3 was dark and hard to see, Quake 4 offers a lot more bright environments but you’ll be thrown into many low light levels. Textures are of high quality as well. Given the bright environments, Raven had to pay close attention to the details that can’t be hidden like the dark atmosphere of Doom 3. Thankfully, the main weapon of the game has a flashlight attached to the barrel. I say main weapon because I found that the machine gun was the one gun that I favored throughout the game.

As an Xbox 360 title, the game is plagued by various slowdowns. The console is a not a weak piece of hardware; surpassing some specs on some very powerful computers. Even with the extra power, the game manages to stutter and slow down at various points in the game. The game doesn’t overwhelm you with enemies as there are some levels where they don’t spawn until a few number of them have been killed. Even with the limited number of concurrent enemies, the game can get choppy on the Xbox 360. Depending on the complexity of the level and the amount of characters on screen, you can expect a minor inconvenient jump to a very noticeable and annoying stutter when moving and looking around. There are times where it becomes a slideshow and this shouldn’t happen with the powerful console.

For nostalgia sake, a copy of Quake II is also included in the game. It’s just like how you would remember it if you did fire the game up on the PC when it first came out. You’ll even be able to play through the game cooperatively on the console. It’s a nice little inclusion and one that you’ll have a good time going through if you haven’t experienced the predecessor story-wise to Quake 4.

I tried testing multiplayer but I could never find a person online. During various times of the day I’d try to find a match or create one in hopes of someone would join. I don’t know if it was because I didn’t have people that would have good pings with me or if there was truly no one online to play the game but finding another Quake 4 player on the Xbox 360 was not possible for me.

If you’re going to be purchasing Quake 4 and have access to a moderate to good PC, skip the Xbox 360 version. If you only have an Xbox 360, I’d consider renting this title as the slow downs really hamper a good experience. The single player game wasn’t too bad and I did enjoy a lot of the moments in the game. It didn’t suffer from the monster in the closet syndrome that Doom 3 did and having squadmates for most of the game provided a nice change over the Rambo game style. It’s just too bad the port to the Xbox 360 wasn’t done better though. As a launch title, Quake 4 doesn’t really provide any next-generation feeling.

It's really a shame that a game like this suffers from the old bad port syndrome of stuttering graphics. The single player experience isn't too bad though but there's nothing here over the PC version that would make it a must buy for the 360.