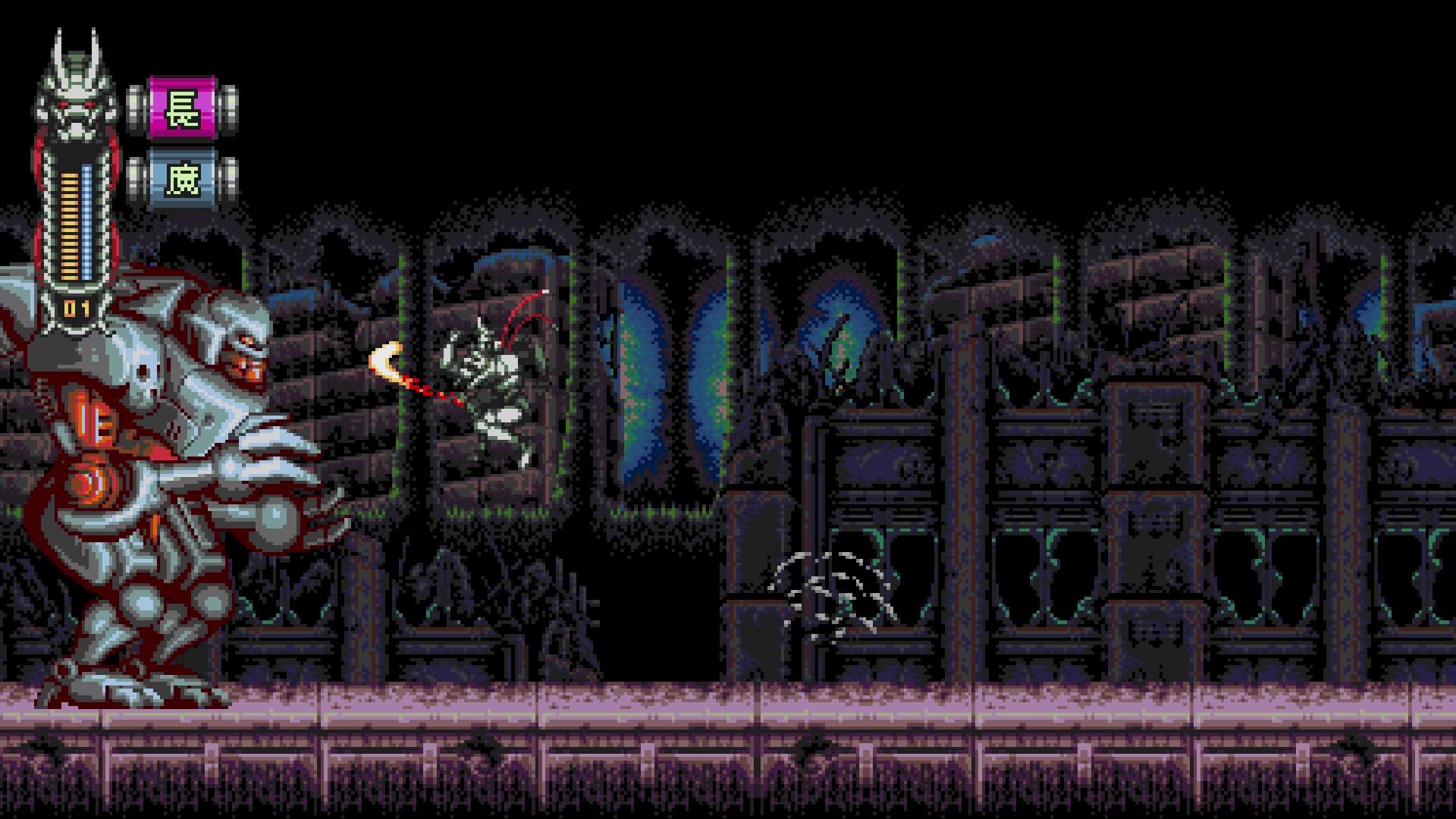 Written by Joseph Moorer on 1/12/2023 for PC
More On: Vengeful Guardian: Moonrider

Joymasher is a Brazilian studio that loves retro gaming. They are the ones responsible for Blazing Chrome, the side scrolling Contra/Metal Slug love letter. They've teamed up with retro enthusiasts The Arcade Crew to bring you another side scrolling game about a cyborg ninja, named Vengeful Guardian: Moonrider. And it has a laser sword.

When I downloaded the demo to Moonrider a few months back, it immediately felt familiar. The description said "Shinobi". Felt like Shinobi, sans being able to throw stars. The description said it felt like a Genesis game. It indeed did, with a little bit of SNES Mode 7 action. The description said "Ninja Gaiden" (NES). Laser sword swings feel very Ninja Gaiden-ish. What I wasn't told was that there were nods to other retro games thrown in for good measure, and because of all this, once I picked it up, I couldn't put it down. 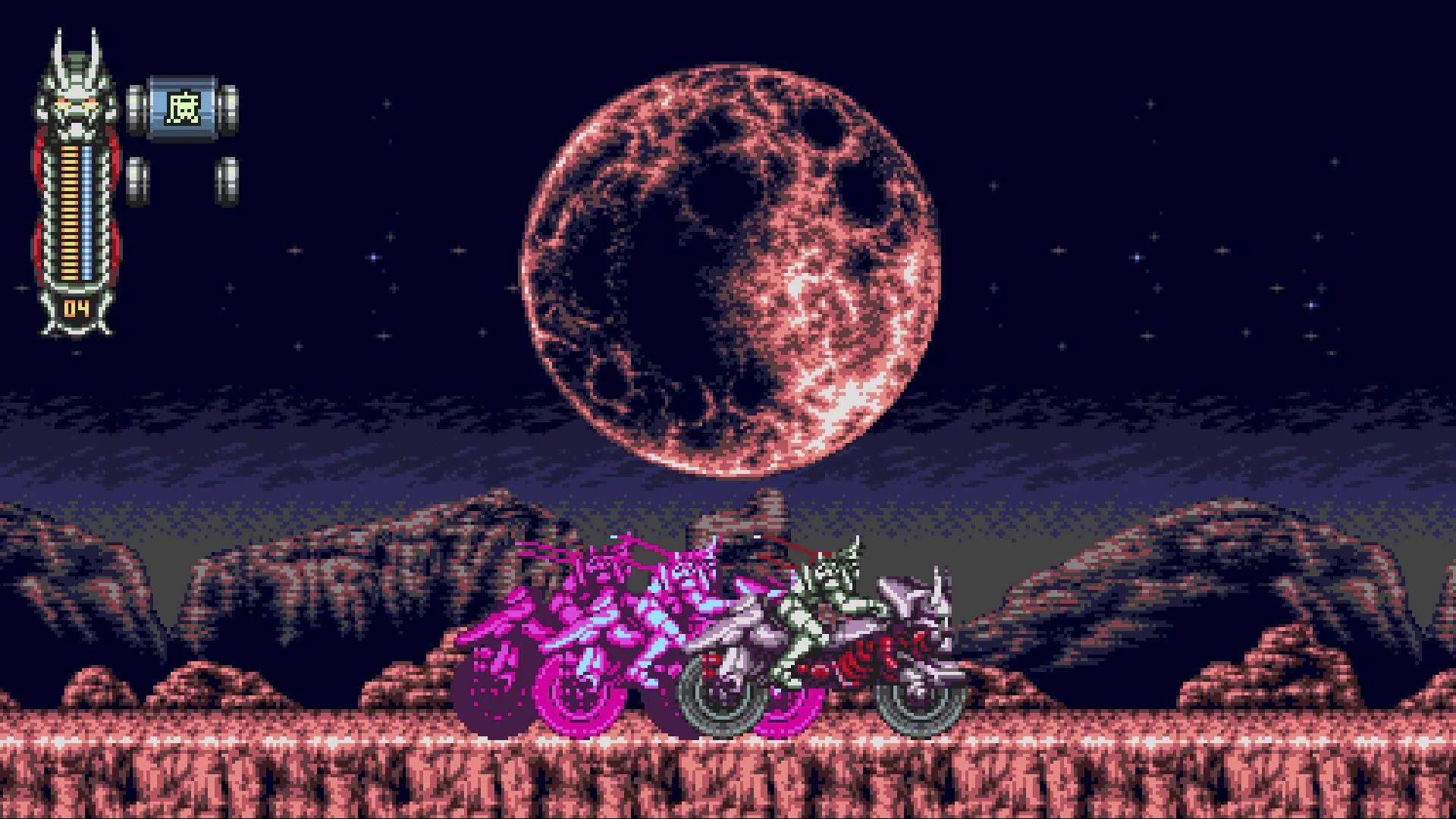 I'll try to keep the comparisons to a minimum in case there are people reading this who weren't born in the late 1970s. Moonrider kicks you in with a insane story. You are a cyborg ninja created as a last line of defense for a totalitarian government. They are big on propaganda, public executions, and ruling with a robot fist.

Moonrider has finally seen enough, and starts questioning it's programming. Why is Moonrider asked to kill on command? Why did Moonrider watch as innocent people get slaughtered for just letting their voices be heard? As things start to get more out of hand in favor of the people, Moonrider is activated by his evil overlords to handle them, except he turns on his own creators, and sets out on a quest to stop the regime. Now that I have you hooked...

Moonrider lets you go through a tutorial, and out of the chamber you discover that this cyber ninja has a LOT of moves. Your laser sword can smack around most enemies, but it also can stop bullets and reflect projectiles. You also have a three-hit combo if you push the button in rapid fashion. Moonrider also has a dash with a double tap in any direction. You can combine this with a more powerful slash, or even a longer jump. Your jump is accurate as far as changing directions mid-air. It's almost too accurate, as the movement tricks you into thinking it would be bulky. Moonrider can jump off of walls too, ala Super Metroid and Ninja Gaiden, but it's very fluid. As soon as you push the button, you make the wall jump, no question. You have a mid air dive kick too. You can use this to come straight down, or at an angle. This kick is very powerful, and safe. When you connect, you bounce off the enemy, and it gives you some height.

With all that, you also get an alternate attack - the Moonspear - that you can equip from a sub menu. This attack cuts through defenses, and you get more as the game progresses. More on that later, and know that this attack uses MP, which is indicated by the Mega Man meter on the top left side of the screen, next to your energy bar. 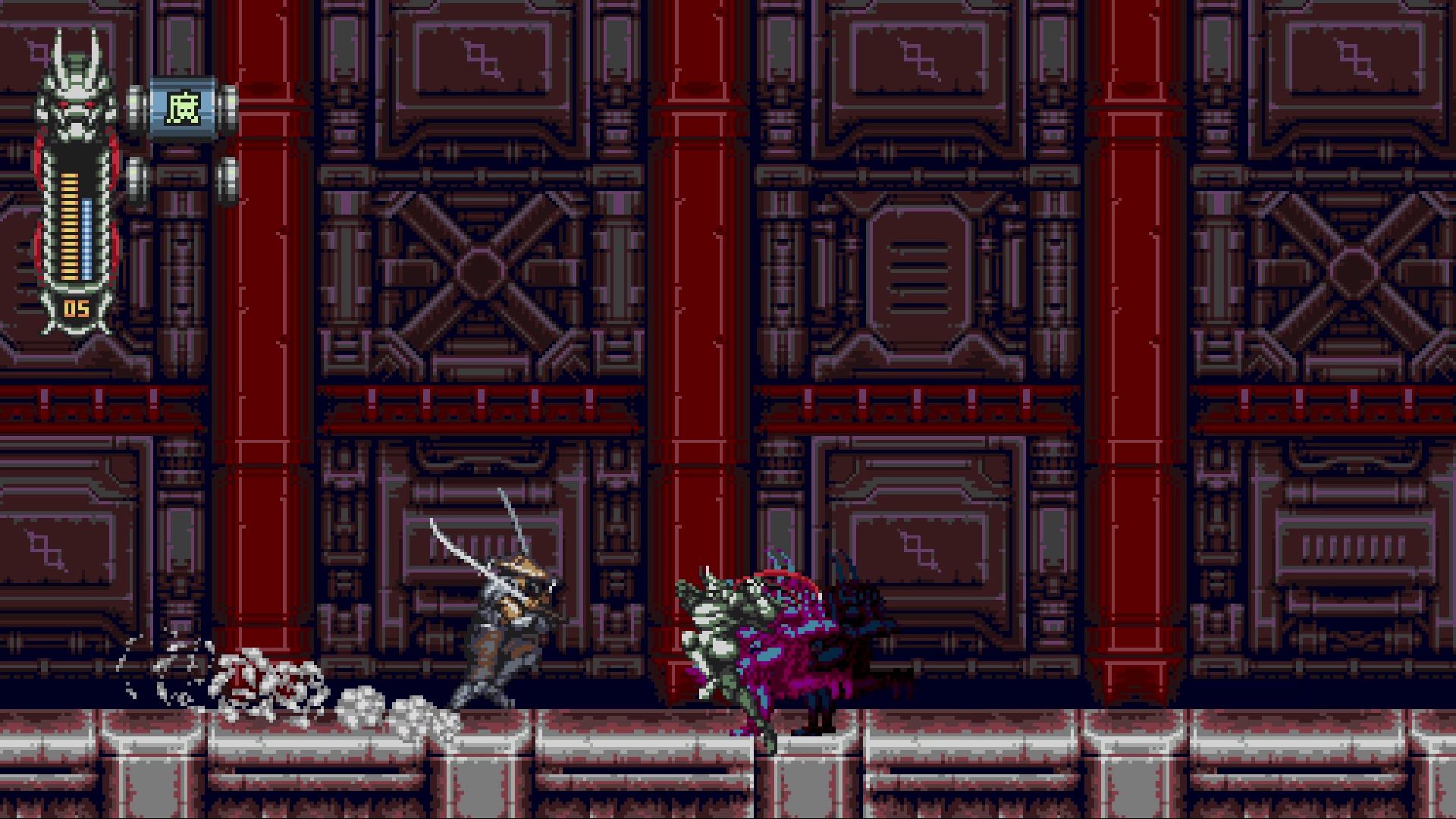 After the tutorial, you are introduced to a stage select. You have to do the opening stage first, which shows you starting your own revolution against your own creators. This opening stage quickly teaches you two things. You're not as good as you think you will be, and everything will destroy you. You're not going to destroy your own bosses with one swipe.

The enemy variation here is plentiful. Low level soldiers just run right for you, while others shoot from long range. There are floor and ceiling turrets. There are dudes with laser shots. And of course, there are enemies with shields. Lots of enemies with shields. Then you are introduced to your first mid level boss. All these bosses have their own patterns and ways to beat them, but don't mistake this for an easy way out. They came to bring the pain, and they will end you quicker than you can say "it started me all the way back here!?" Luckily, with all the obstacles, there are capsules littered throughout the stage which contain orbs to refill your life and MP. There are also extra lives, so search and wall jump. These refills are everywhere when you least expect them.

You can go to stages in any order after the opening stage. Of course, every stage has its own Mega Man-like boss at the end of its themed stage. And they are all guardians, trained to do exactly what you were trained to do. Destroy. They all try to convince you to rethink your newfound resistance, but you are so hell bent on figuring things out for the good fight that they just don't care.

Everyone has their own "Have At You" moment, and that's given in a gritty Japanese voice over that sounds so cool. It lowers your defenses before they come out swinging. They all have their own powers and move sets, and they will make short work of you if you're not on your toes. Each of their hits take a nice chunk of energy, and though you are refilled every time you come back, stay far far away from the game over screen, because it's back to the beginning. And then the work comes with getting back to the boss without losing any lives. There's a water level, too. Dream come true, amiright? 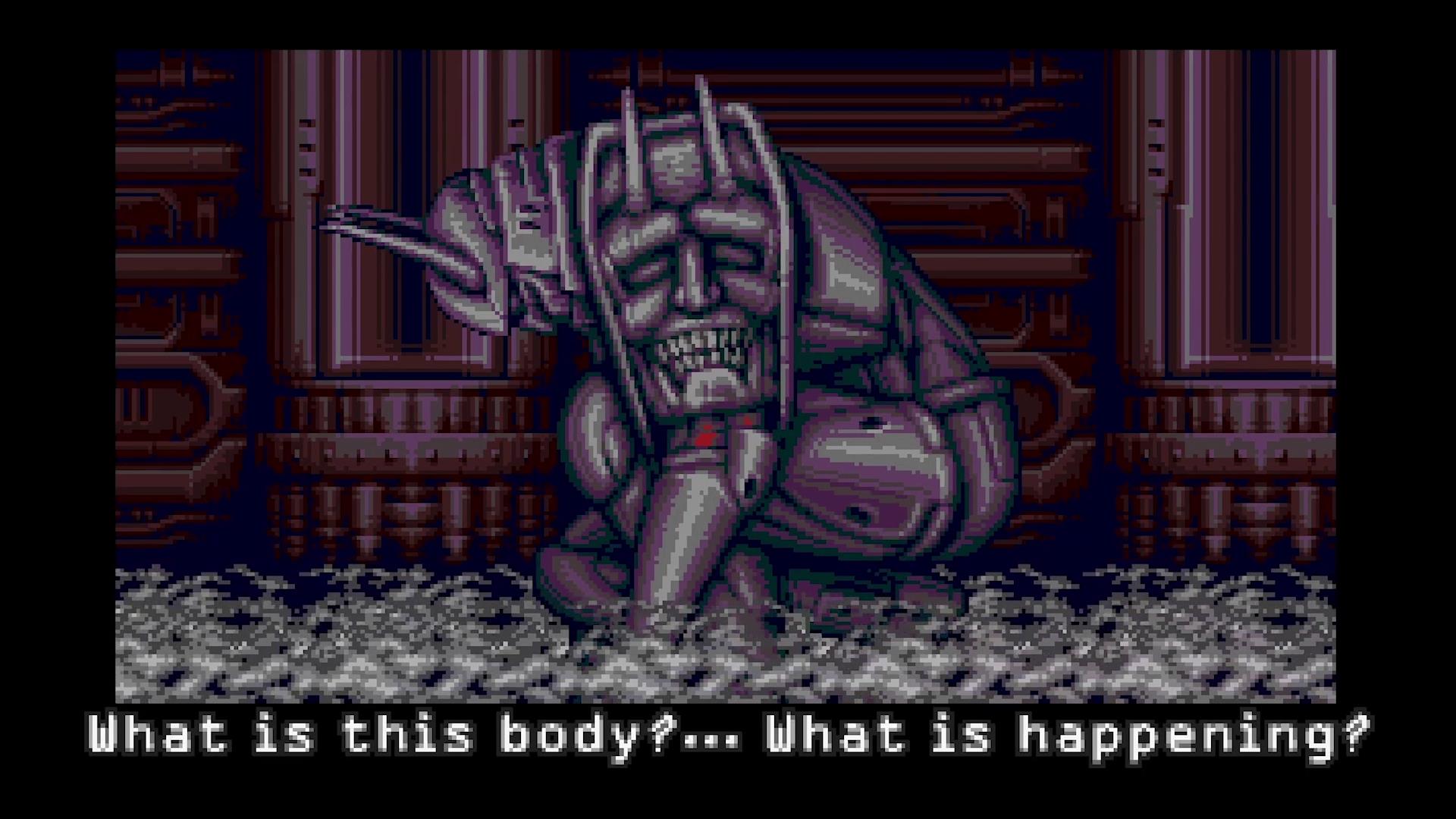 Now, the cool part here is after you defeat a boss, you receive their weapon. There's a flame boomerang called the Flamerang, a Stormshot, which is like a long multi hit gust of wind, and the Photon Dash, which teleports you across the screen right through enemies. I'm going to spill the beans here and say I only used maybe three of these weapons, because most of them didn't fit the bill in such fast paced action. I want to spill more beans. Get the Darkporta, and use it on all the bosses. I haven't tested this theory, but the first time I used it, I loved it. I also am not sure if certain weapons fare better against certain bosses. Is the hydro Shuriken good against Flamestalker? I honestly cannot tell you that. I was too busy getting mopped up by Stormdiver. Find the patterns. Smash them all. Get their weapons.

To help you in your quest, there are hidden computer chips that you can equip to make it a little more manageable to fight hordes of enemies. Once you get these upgrade chips, you can equip them to one of two slots as soon as you find them. There's a chip that refills your MP every few seconds, or one that refills the MP every time you destroy someone. There's also the detective chip to help you find these other chips in their secret locations. Look everywhere for these. They help immensely. Find the best combination and run with it. The game also insults you once you get the game over screen the first time by offering the armor chip. The armor chip gives you better defense, but your end-level grade will be no higher than a B. 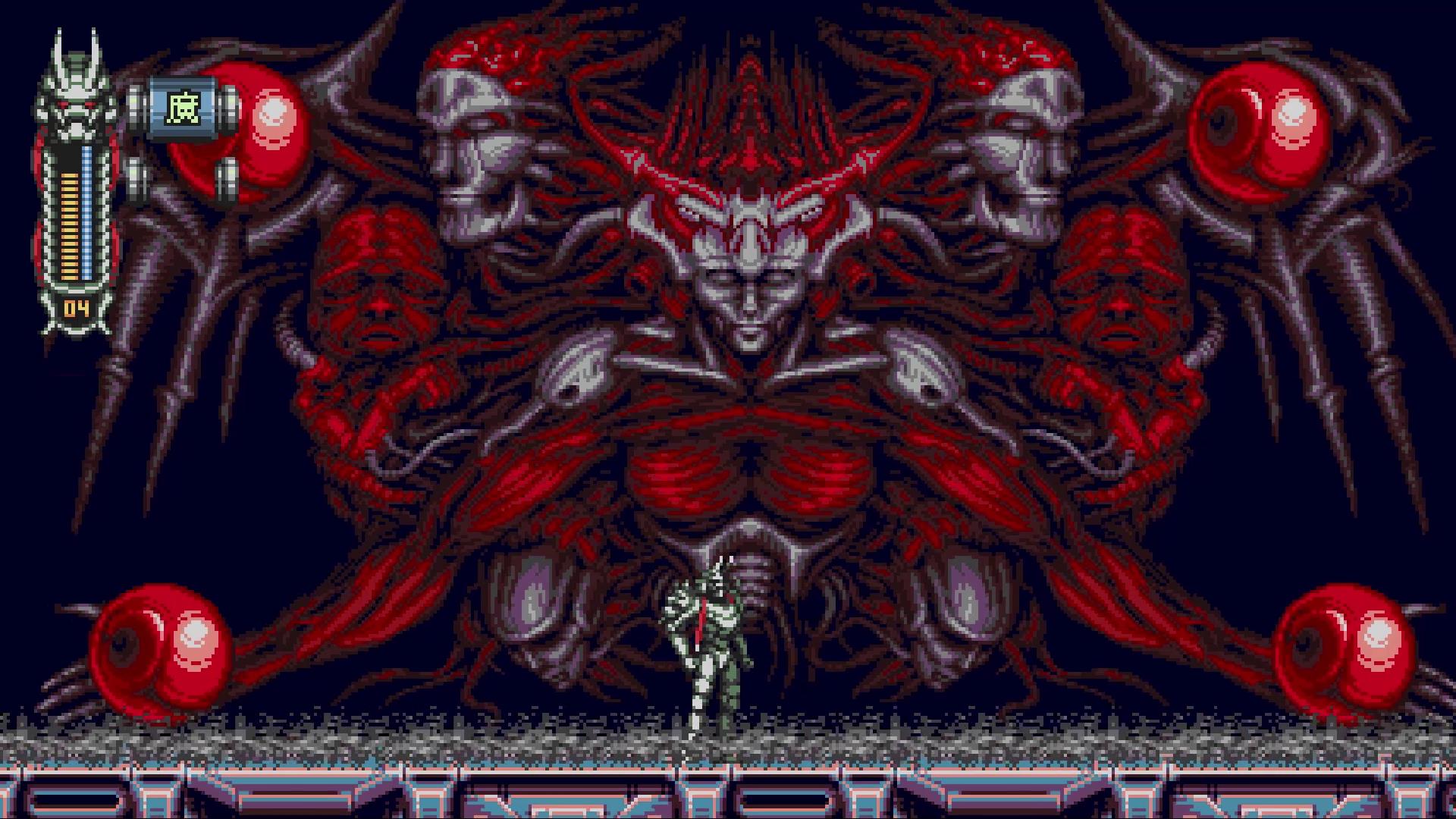 Speaking of grades, the game grades you on how good your run through is. Time, how many lives you lost, and how many hits you took fighting; everything are all factored in. Once you get good enough, you'll find yourself trying to speed run through the later stages because you got lucky and beat a boss. Now you think you're good at the game. Don't make that mistake. Now, on your second run through, where you try to get S grades for all of them, the game is designed as such. But that doesn't mean that it will be easy. The completion takes about 2 hours before you hit the credits, and the ending is done well enough to want to follow the story from start to finish.

I have no qualms with Moonrider. There are CRT filters that make the game more nostalgic. You can switch up the controls if you want. You can also quickly get in and out the game, as there is an auto save. You have three slots for these games too, so you don't have to worry about someone else playing your game. 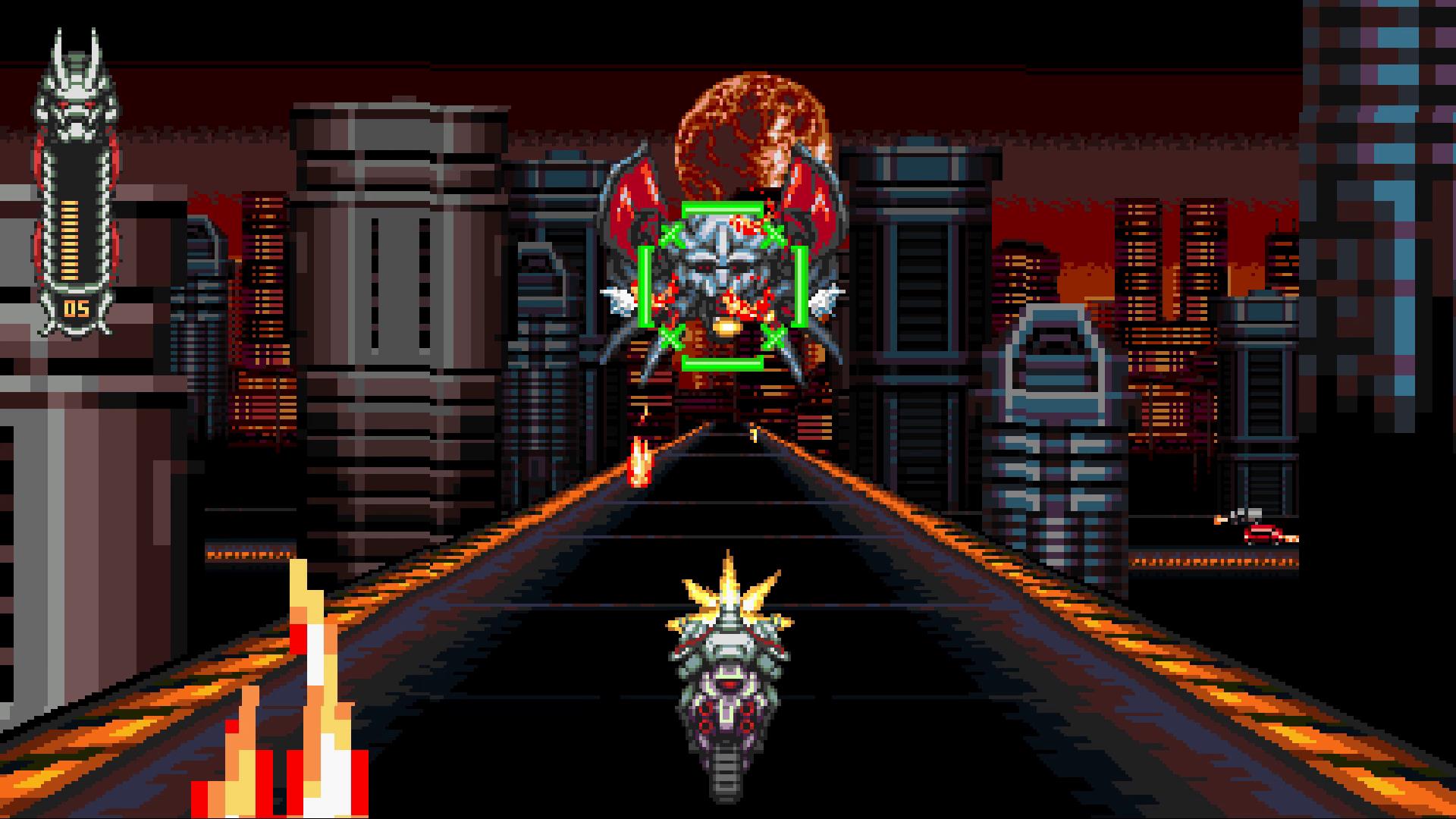 The gameplay and controls feels very tight. There is ZERO slowdown, even when the action heats up. The enemies aren't as unfair as previous games in this genre. The extra weapons are overkill, but that's not a complaint, more so, an observation.  For the price, this game will take you back. I say this with any modern retro game - there is a lot of fun to be had watching the kids playing this and getting punched around in a video game that isn't Call of Duty.

Vengeful Guardian: Moonrider is a fantastic game. It reminds you of how those old SNES and Genesis games were, enhanced with plenty of quality of life elements. If all your side scrolling melee retro games got together, and created a game in the lab of a maniacal government, it would be this. If you love retro 16-bit action games, you won't regret this. Cyber ninja vanish.