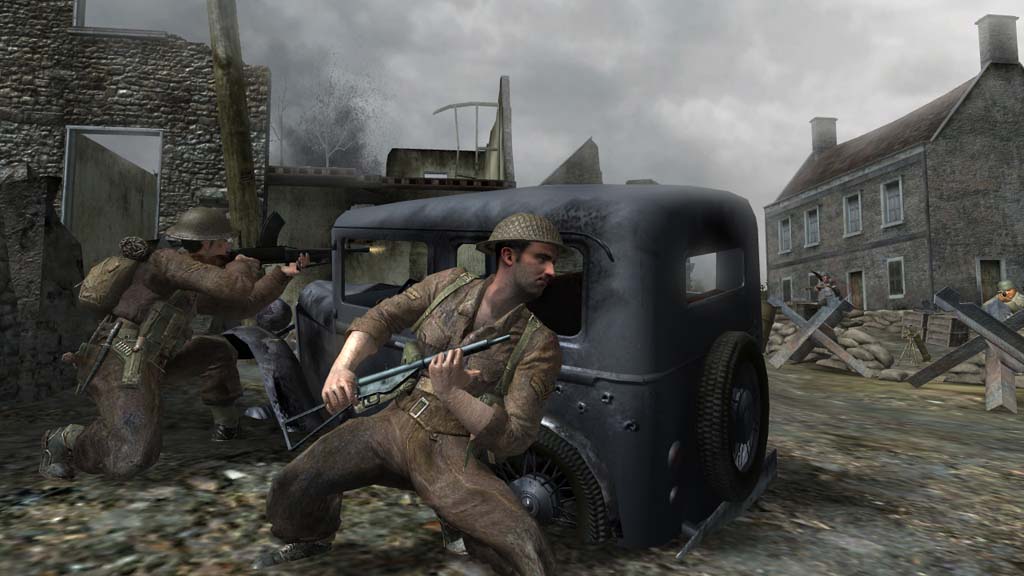 The first thing I should mention before getting to far into this review,is that I’m one of those keyboard/mouse snobs who usually can’t stand to play FPS games on consoles.  I’ve never been a huge fan of the console control as it lacks the precision that a keyboard/mouse solution provides.  So it was with a bit of trepidation that I approached Call of Duty 2.   Having played a bit of the PC version at a LAN party a few weeks before the 360 launch and having tested out the playable demo at Best Buy a few times I knew roughly what I was getting into.  While my first impressions were positive they weren’t nearly as positive as the experience I had when I actually played through the entire game.

Like every other WWII shooter on the market, Call of Duty 2 has you playing through several different major campaigns of WWII.  This time around you will slog your way through Russian, North African, and .  You start out in the excellent Russian campaign and then head to North Africa for the British missions and then wrap up with some American/British missions in .  The missions themselves are well structured as you’ll be doing everything from patching up communication lines to taking out squadrons of Panzers in the African desert.  For he most of the game you’ll be on foot but there are a couple of fun vehicle based missions (including a romp in a armored car that’s a bit reminiscent of the insanely fun jeep sequence from the first Call of Duty game).

The great part of the missions is that they are presented in a very cinematic manner that you really feel like you are playing a movie.  This is done through the excellent graphics in the game and the amazing score as well as the excellent environments the developers have created.  The developers at Infinity Ward did a great job of adding dramatic music through out the game in the right places to enhance the game play.  Early on in the game you are charged with repulsing a large German rush.  As they attack the music swells then changes over to a victory song when you beat them back.  It’s a great moment especially when you factor in the huge yell that the Germans give when they rush.  If you’ve got a good 5.1 surround stereo setup you’re in for a real treat as the game uses all of the channels to create an immersive environment.

Weapons in the game sounds like you would expect, from the high speed MG82 to the various rifles and machine guns everything sounds pitch perfect.  The voice acting in the game is also solid and your squad mates will provide you with valuable information about where enemies are shooting you from and what your next objective is.  There’s even a bit of humor interspersed throughout the game.

You can’t have an immersive environment without good AI and the AI in Call of Duty 2 is solid.  The Nazi’s will actually react in an intelligent manner to your attempts to kill them for the most part and they use the cover in the game well.  They will also run away from thrown grenades and try to flank you if you’re not careful  They occasionally do some stupid things like run right at you but that’s more the exception rather than the rule.  Your squad AI is also solid but they do tend to run right into your line of fire on occasion but they do make for good meat shields against enemy hordes and they do tend to take out their share of Germans if you give them enough time.

Controlling your virtual solider is fairly easy.  The left thumbstick controls movement while the right thumbstick controls where you look.  The right trigger fires you weapon while the left trigger allows you aim your weapon using the iron sights on the gun or the scope of a sniper rifle.  The left and right bumpers handle smoke and frag grenades respectively.  The face buttons handle switching between weapons, jumping/hurdling, reloading, crouching/lying down and interacting with items in the environment.  The controls are solid and fairly intuitive (especially if you’ve played any of the previous COD console titles).  While the controls aren’t nearly as accurate as their PC counterpart, they get the job done rather effectively.  What does separate the console version from the PC version is the excellent use of the 360’s rumble capability.  This feature is used well and provides another level of feedback in the game, something that you really don’t get on the PC.

Graphically Call of Duty 2 is easily on par with the PC version set at the highest detail levels and is easily among the best looking games in the 360 launch.  What’s great about the game is not just the big stuff like realistic weapons and environments but the little things like the ultra-realistic snow in the Russian levels (which blows side to side as well as up on occasion) to the fine little touches on all of the weapons (including dents on the bolts of the guns).  The only negative I have about the graphics is that the people do look a little too plasticy and you do seem to kill the same fat German soldier with the Hitler mustache quite a bit.

The single player side will take the average gamer standard ten hours to get through on the standard levels with a few more hours needed to finish the game at the higher difficulty level. The Xbox Achievements in the game are OK.  You get an accomplishment for completing the training mission and the single player campaign on normal difficulty with additional achievements for completing the levels and campaign on the veteran difficulty level.  It would have been nice to see some achievements for multiplayer play but you will really have to work to get all of the points available in the game.

The multiplayer is where the game does stumble a bit.  The game only supports a maximum of 8 players total in a match (down from 16 on the PC side) and includes several multiplayer modes (deathmatch, team deathmatch, CTF, Headquarters, and Search and Destory).  The different modes are nice but the multiplayer is a bit laggy if you have the max number of players in a game.  This is a bit concerning since the game doesn’t support that many players.  Hopefully the folks at Infinity War will work on fixing this and will release a patch over Xbox Live.  If you are looking at Call of Duty 2 for a multiplayer experience you might want to look at Perfect Dark Zero instead.

Call of Duty 2 is easily one of the most cinematic games released on any platform.  The graphics and sound grab you from the first mission and carry you through to the end of the game.  The only thing that is really holding the game back is the buggy/laggy multiplayer which will hopefully be fixed soon.

One of the best FPS games Iâ€™ve ever played on any platform. Call of Duty 2 is one of the few launch titles that really takes advantage of the 360â€™s hardware. The excellent single player is tarnished by the buggy and laggy multiplayer side though.