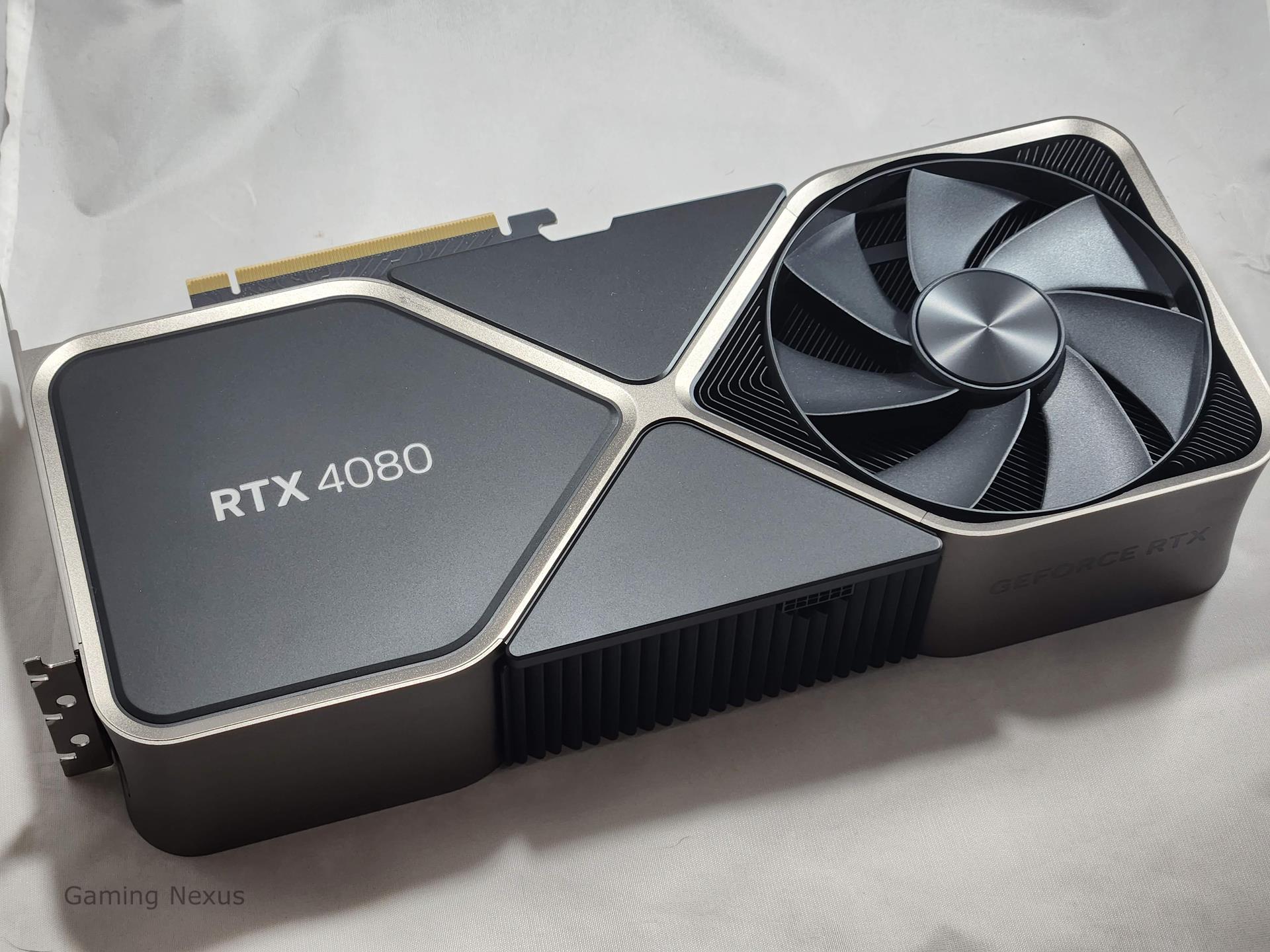 The NVIDIA GeForce RTX 4080 was announced alongside the recently released GeForce RTX 4090, and had a sort of mixed reaction to its unveiling. On one hand, you had a card that everyone was expecting as the high end card just below the RTX 4090, but then you had NVIDIA also announcing a 12GB RTX 4080 that had different specs - besides just the memory - than the “normal” RTX 4080. Thankfully, NVIDIA decided against releasing the 12GB version and just went with the RTX 4080 that includes 16GB of memory so as to not confuse people.

NVIDIA was very generous and sent over a NVIDA GeForce RTX 4080 to test and we’re going to put it through its paces against a GeForce RTX 3080 Ti as NVIDIA is touting its performance over that card rather than the regular GeForce RTX 3080. I’ll throw in scores for the RTX 4090 and the RTX 3090 Ti as well.

By now you probably know all about the Ada Lovelace cards in terms of features and architecture, but if you need a primer you can read my review of the GeForce RTX 4090. Some of the big additions to this generation are DLSS 3.0 with Frame Generation, shader execution reordering, and the improvements to the Tensor and RT cores. Frame Generation has been in the works at NVIDIA for a long time and it’s something that NVIDIA is really pushing in terms of offering better performance, especially with CPU-bound games like Microsoft Flight Simulator and Marvel’s Spider-Man.

We’ve had a month or so now to digest Frame Generation and see what benefits and detriments it has with the new feature. Besides increasing frame rate at a small penalty with lag, there can be some image artifacting that can happen. It’s a lot more noticeable when you’re at slower frame rates where there’s more time between real frames and generated frames. But the faster you go the less of an issue this becomes, because an inaccurate generated frame will appear in less time on the screen. Like most things, this technology works better in certain games. And remember, DLSS 3 with Frame Generation is just getting started. DLSS certainly didn’t have the best implementation when it was first released, but it has come along to the point where you should almost enable it by default in at least quality mode. I’m looking forward to seeing how NVIDIA improves on DLSS 3’s Frame Generation and perhaps in a few releases, we’ll be talking about how this is another in a line of features that you should really use with a NVIDIA card, provided you aren’t playing fast twitch games. 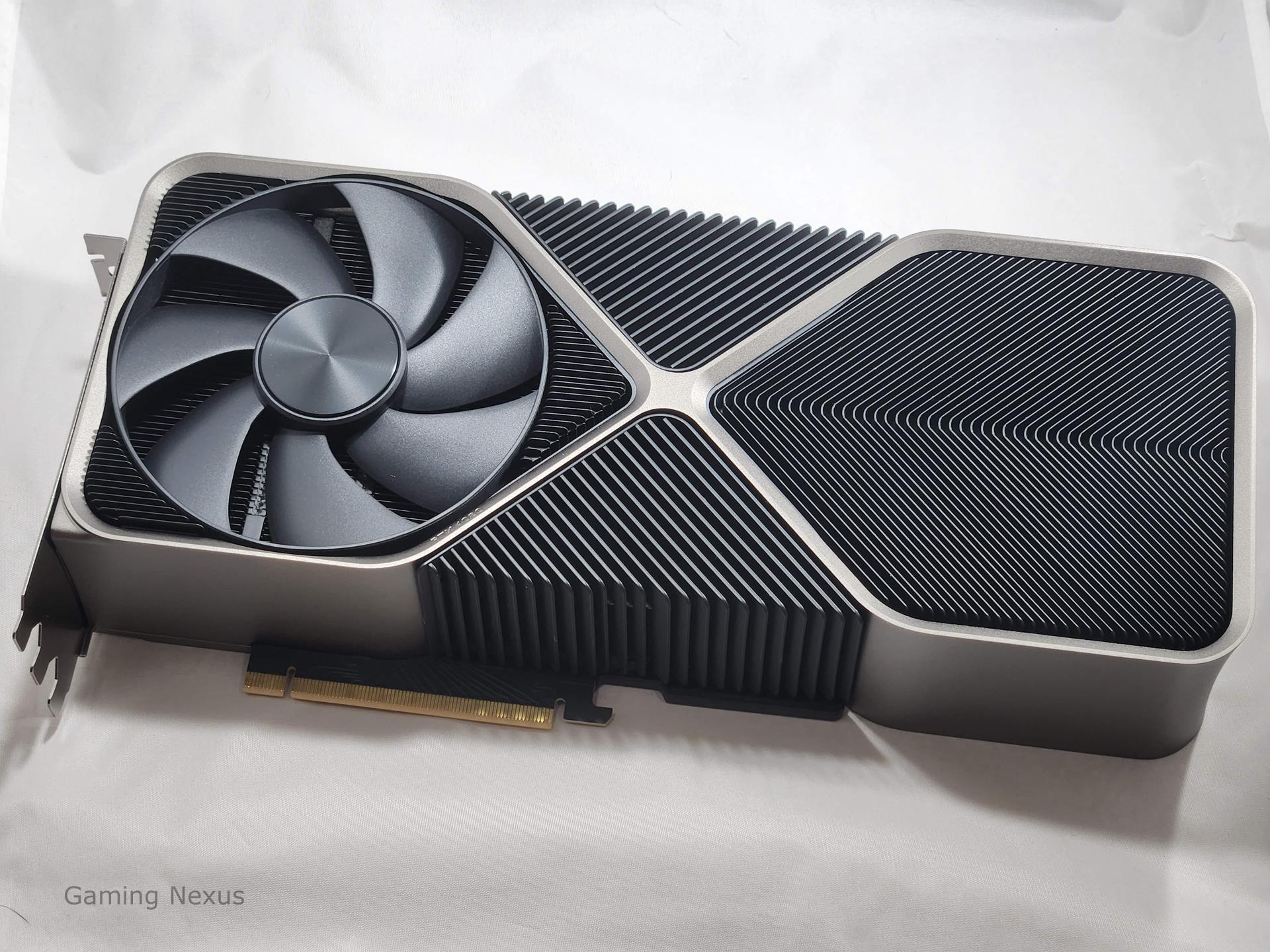 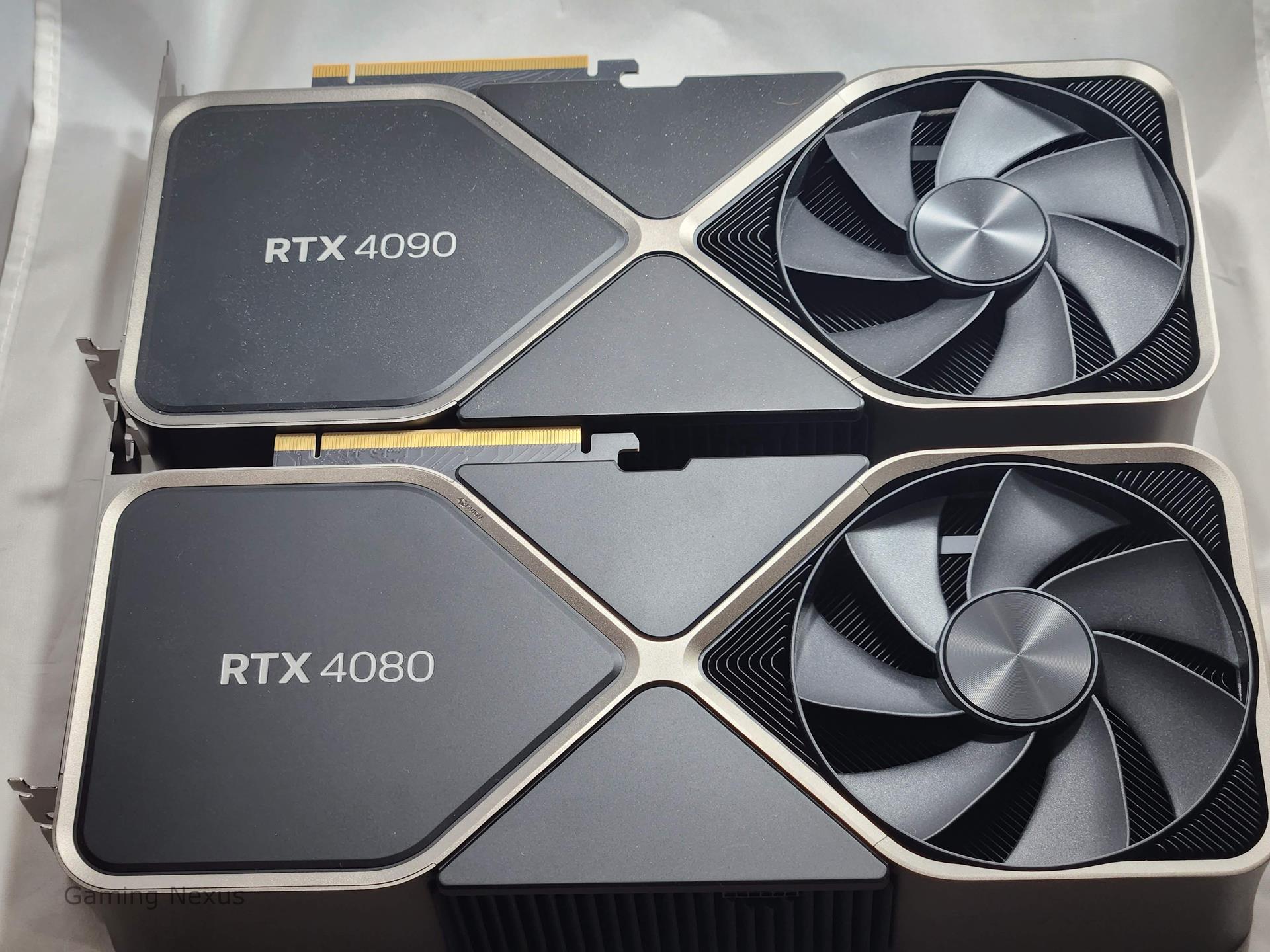 Nothing’s changed on the I/O side of things with one HDMI 2.1 connector and three DisplayPort 1.4a connectors. I don’t foresee NVIDIA moving to including DisplayPort 2.1 until the next generation of card, which is disappointing for some. I do wish NVIDIA kept the USB-C port on their card, something that AMD has done with their latest RDNA 3 cards. It’s useful for us VR folks who would use that plug their HMDs into. 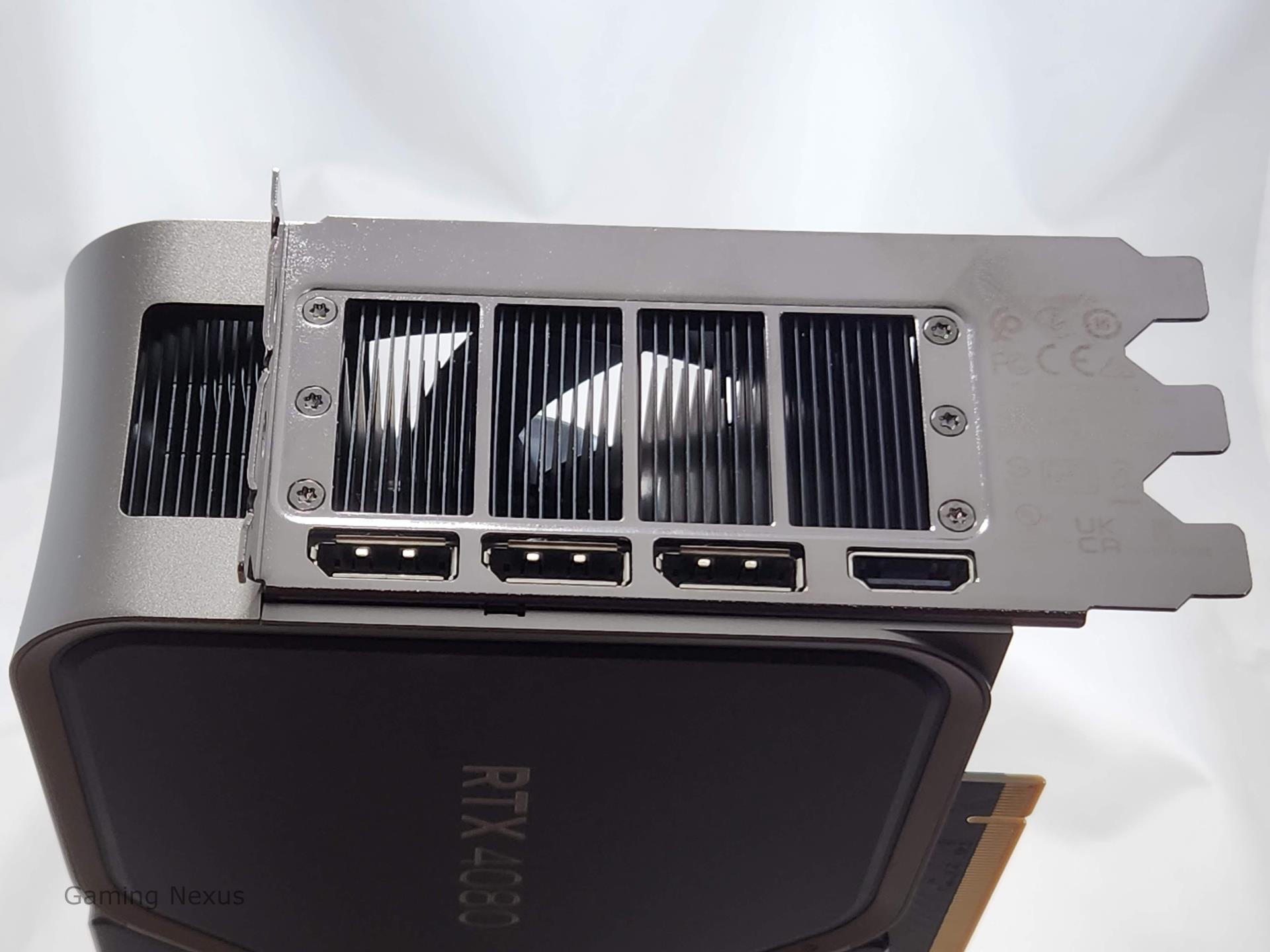 So here’s the system that I am using to test the GeForce RTX 4080.

All benchmarks were run three times and at 4K resolution with max settings that are set when using a game’s preset. For this review, I’ve included Call of Duty Modern Warfare 2, which has a built-in benchmark. Other than Shadow of the Tomb Raider, I used Frameview to record the benchmarks and what you see are the results from using that tool. 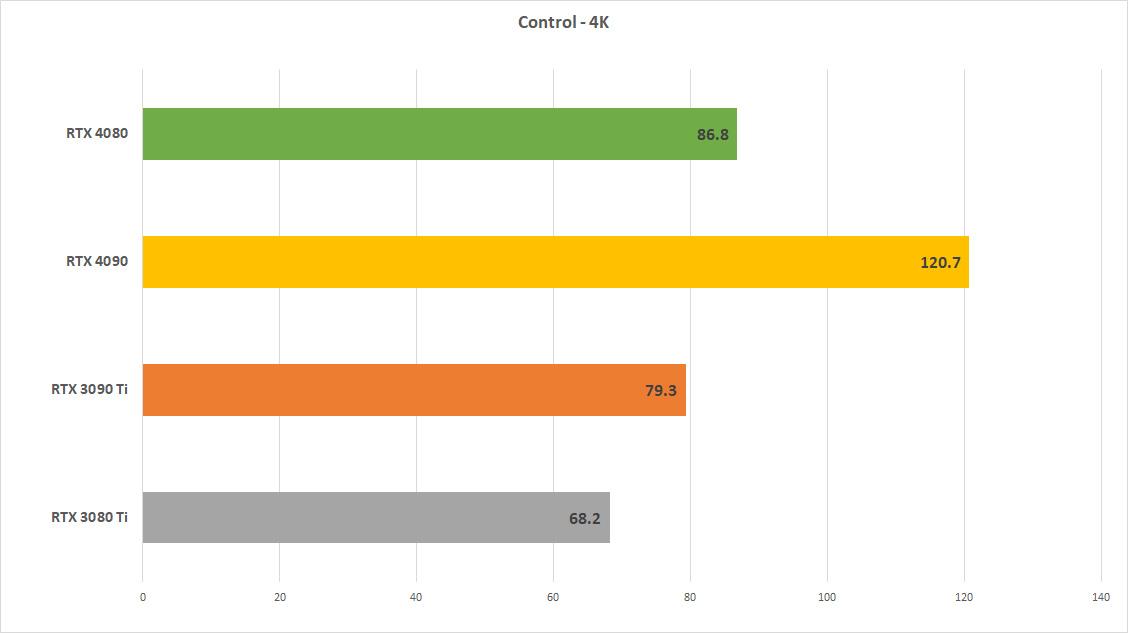 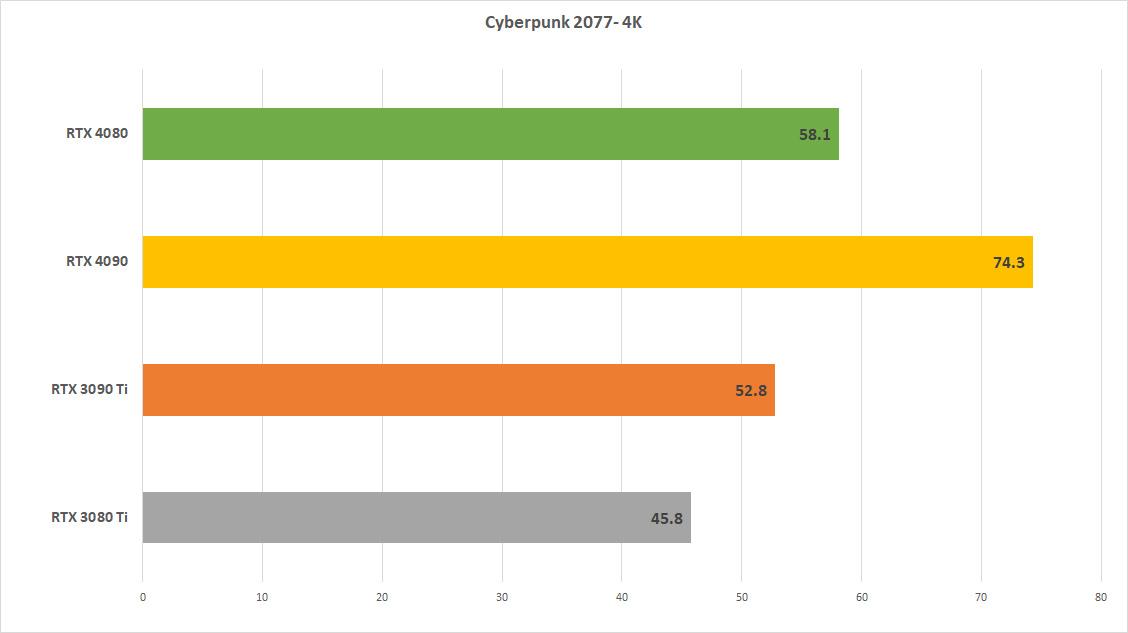 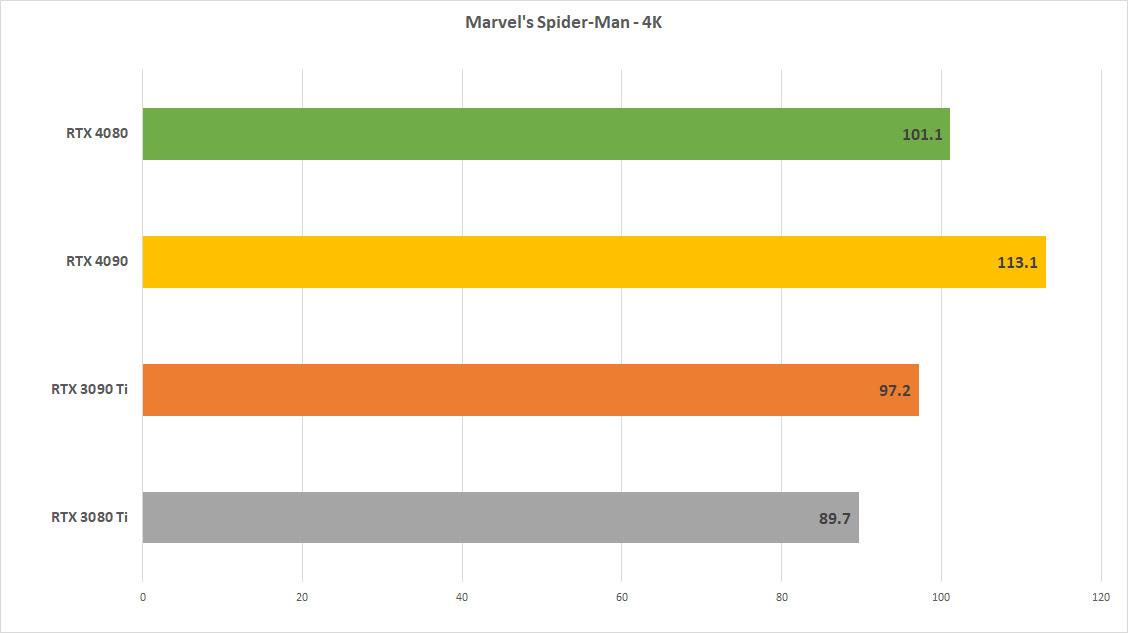 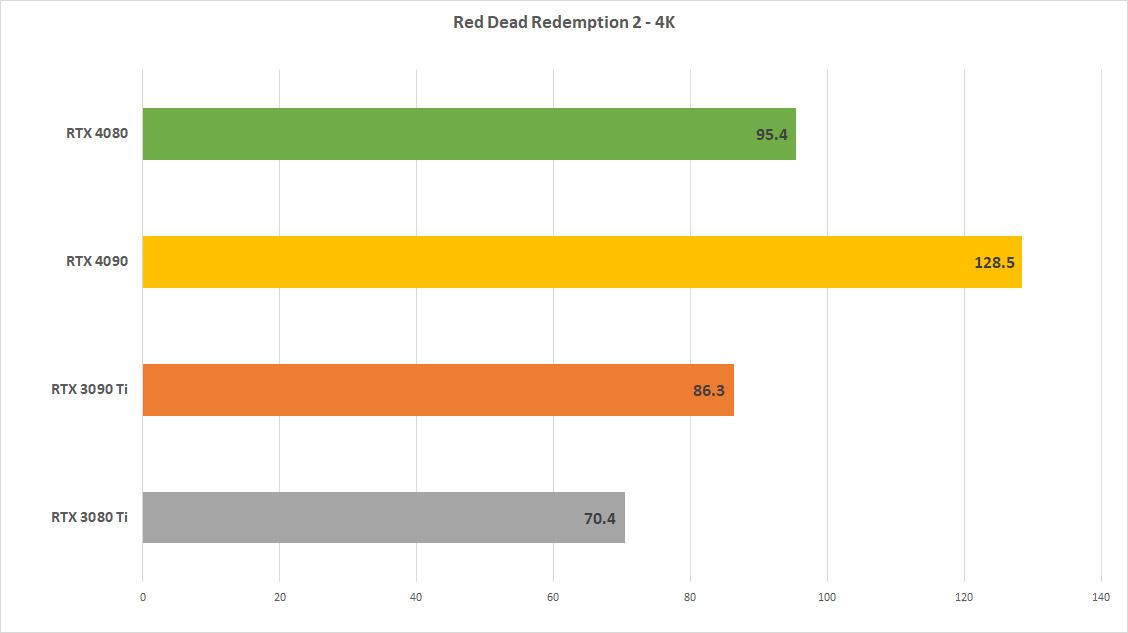 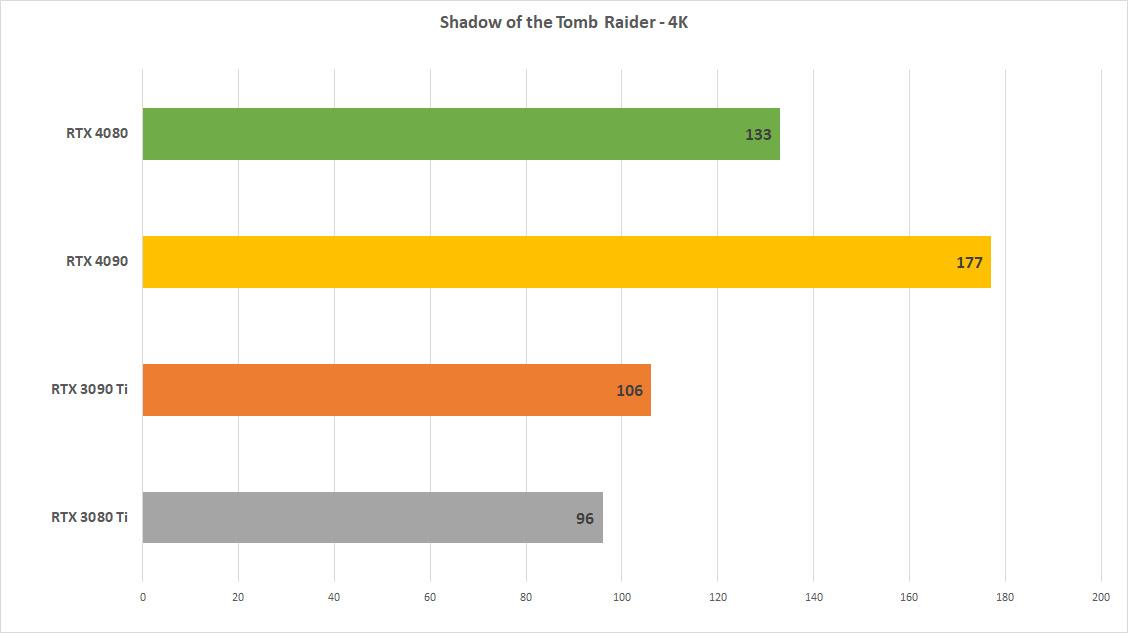 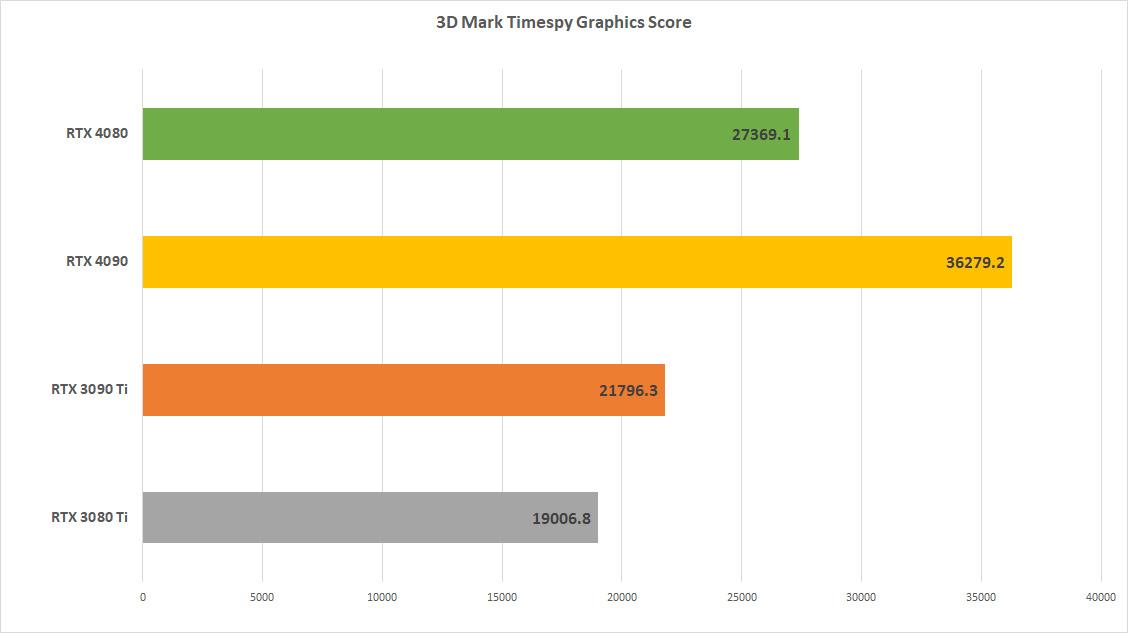 For straight rasterization, the card flies, gaining around a 26-35% increase over the GeForce RTX 3080 Ti in non-CPU bound games. It even tops the RTX 3090 Ti as and at lower power draws. We see a 27.2% increase in Control, 26.8% in Cyberpunk 2077, a 44% in 3D Mark Timespy, 12.5% in Marvel’s Spider-Man, 35% in Red Dead Redemption 2, and 38.5% in Shadow of the Tomb Raider. Marvel’s Spider-Man is more CPU dependent in my current setup and Microsoft Flight Simulator is purely pushing the CPU at its limits.

For VR, I wasn’t able to get OpenVR Benchmark working on the RTX 4090 review, but a driver update fixed that issue so I was able to go back and run this one on all the other cards. I also kept SuperPosition VR in as well so we have a few VR or VR like benchmarks in here. 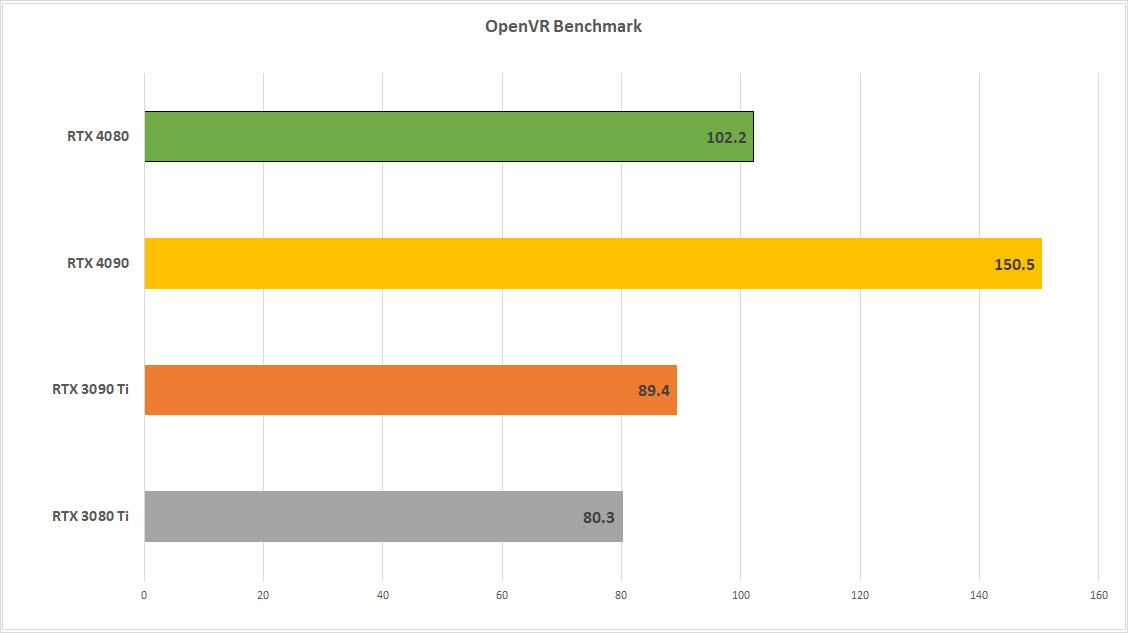 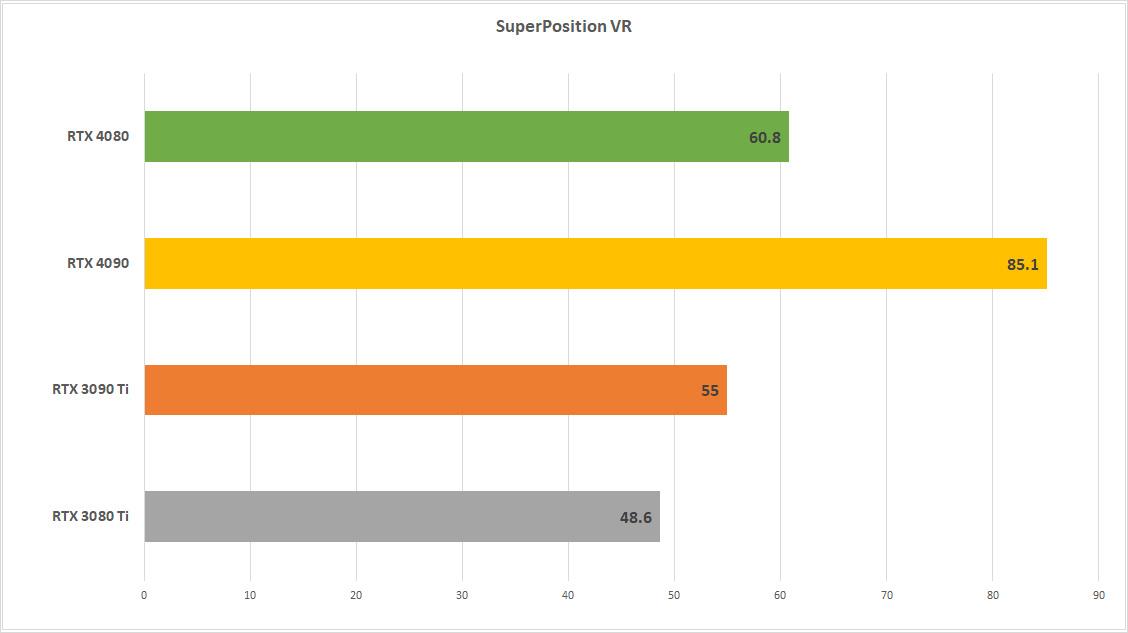 A 27.7% increase in OpenVR Benchmark over the RTX 3080 Ti is pretty impressive and should provide some nice smooth gameplay for most games in VR. 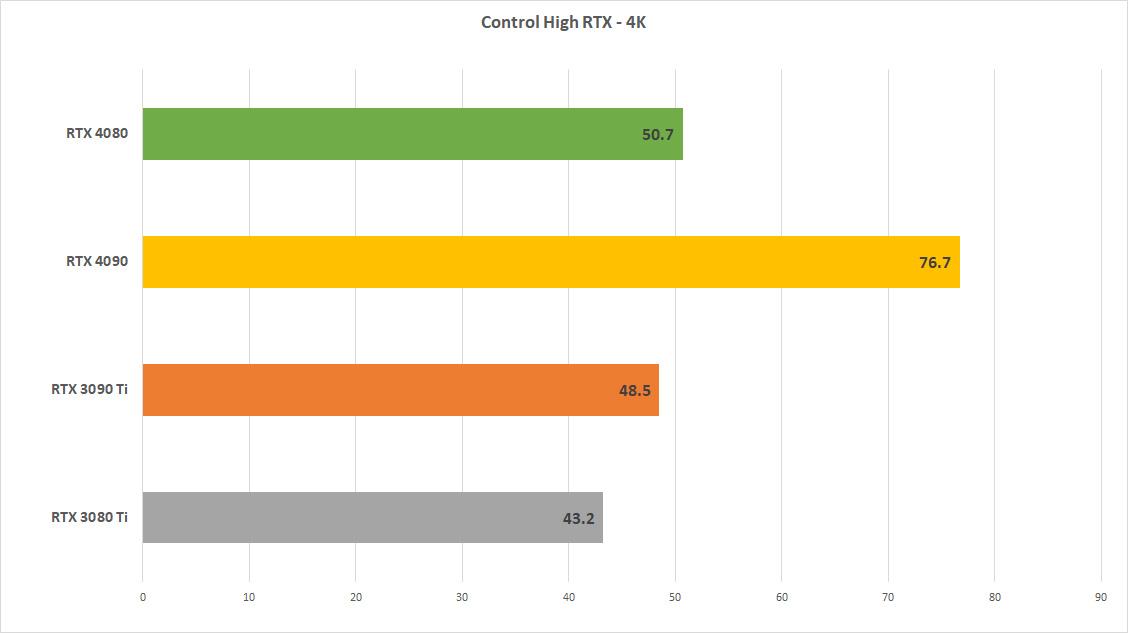 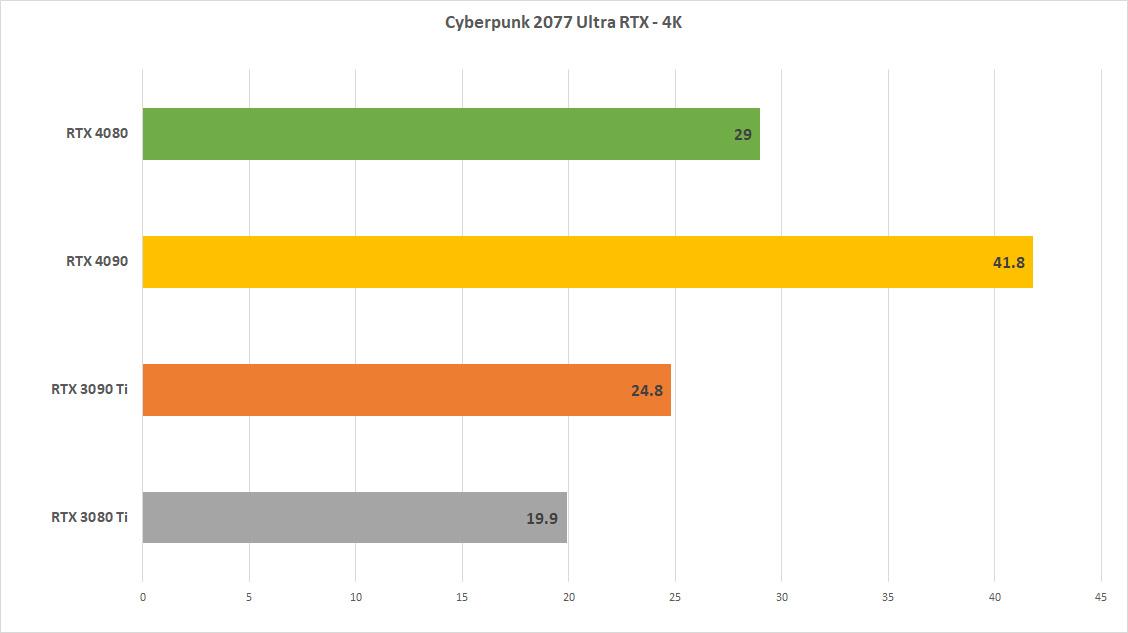 In Cyberpunk 2077 with Ultra RTX enabled, there’s a solid 45.7% uplift over the RTX 3080 Ti. While not a smooth experience per se, it does show how good the newer RT cores are without DLSS getting involved. We don’t see as much improvement with Control at 17.3% though.

DLSS is what really helps with making ray tracing run at acceptable speeds in a lot of situations. As usual, I’ll run Quality and Balanced DLSS settings as I find the Performance setting in most games to deliver blurrier image quality. 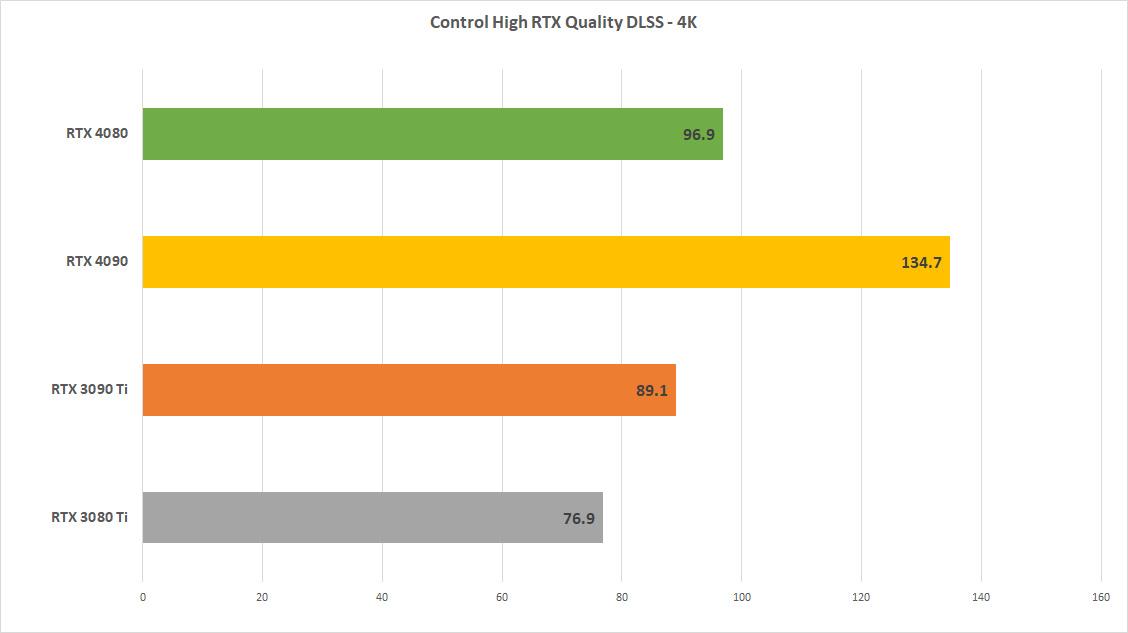 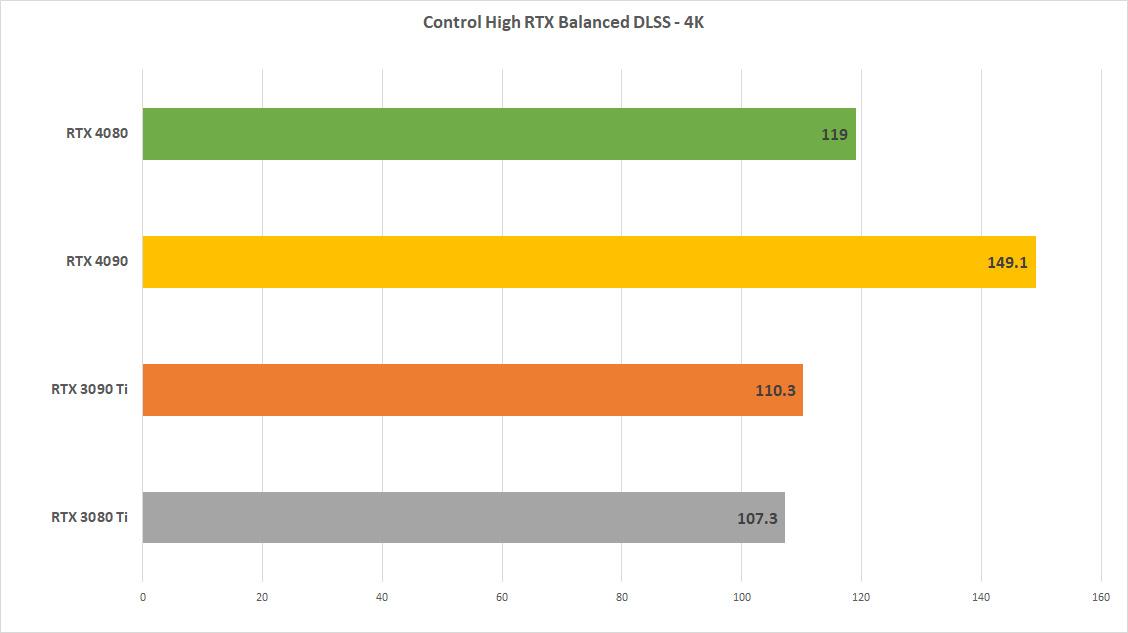 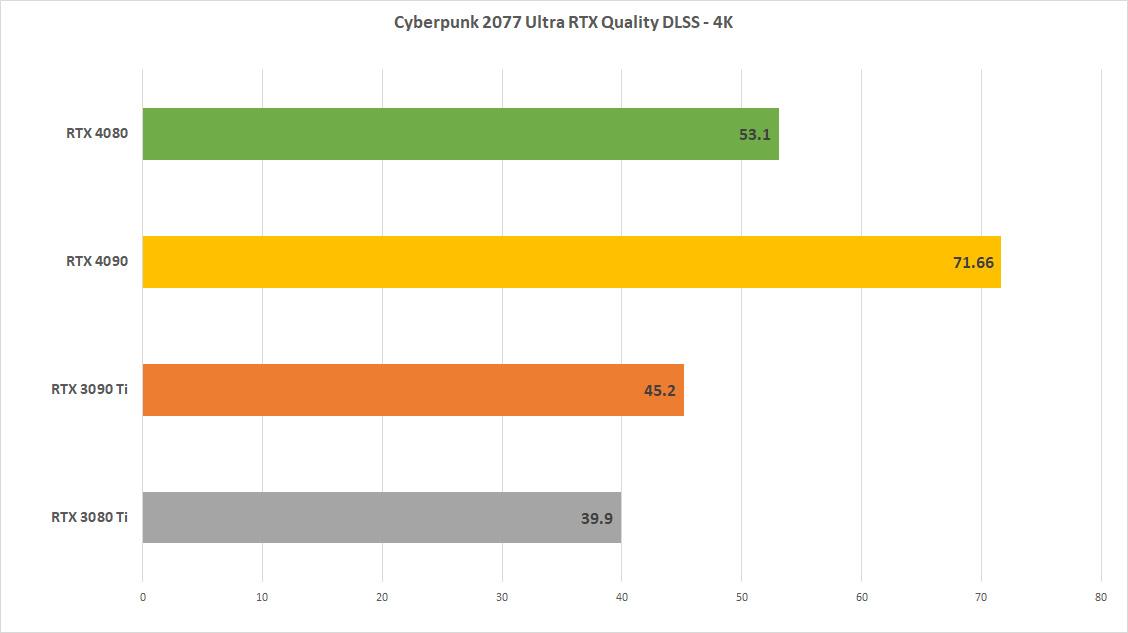 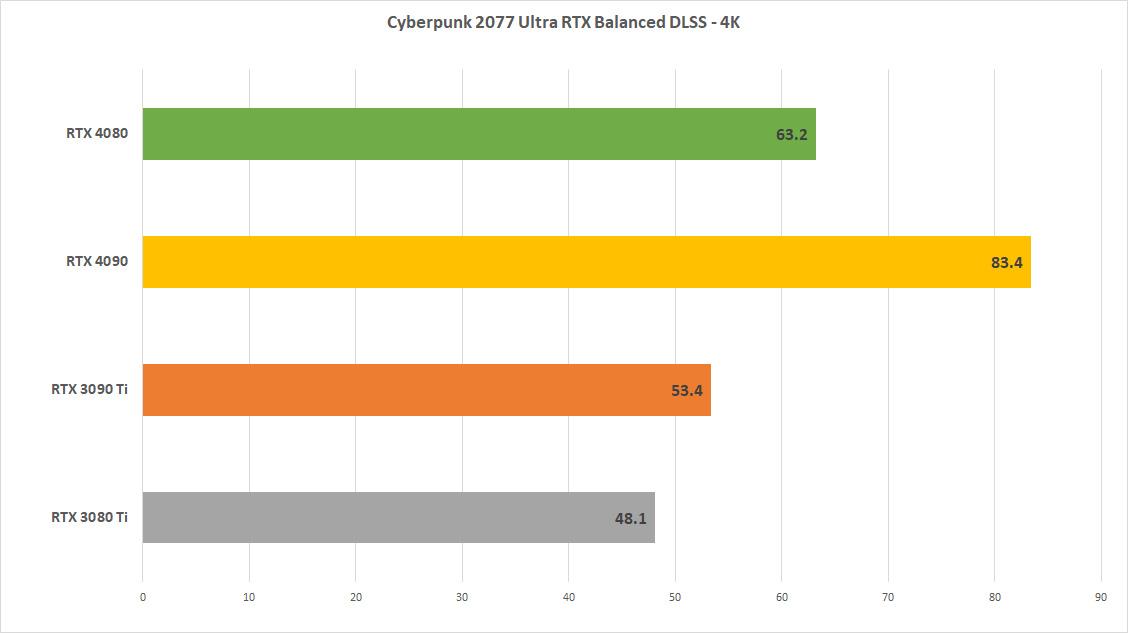 In Control, we see the performance gap widen from the RTX 3080 Ti with RTX and Quality DLSS giving us a 26% increase. Moving to the Balanced setting, that gap narrows with a 10.9% uplift. Cyberpunk 2077 sees more of a gap with 33% performance over the RTX 3080 Ti in Quality DLSS settings with ray tracing turned on and a 31.4% uplift making Cyberpunk 2077 one of the better games to run on the RTX 4080 with DLSS and RTX on.

DLSS 3 with Frame Generation is NVIDIA’s next big foray into improving performance. As mentioned earlier, I think we’ll need to see how this tech evolves over the years, as DLSS 1 had issues whereas DLSS 2 is such a game changer. Even the first iteration of DLSS 3 Frame Generation works really well in certain types of games and I think there’s a big potential here for Frame Generation to become one of those features you do turn on by default if you have a NVIDIA card and aren’t playing fast twitch competitive games. Those games tend to run pretty fast anyways, but for games like Microsoft Flight Simulator where the game is heavily CPU-bound, having Frame Generation to increase performance really helps. 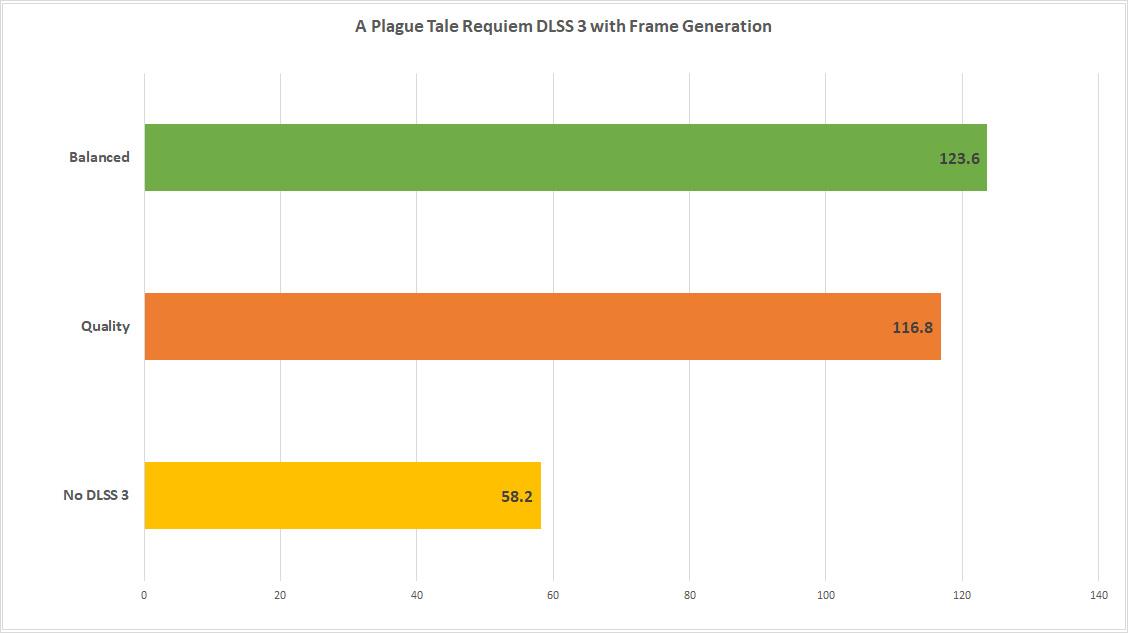 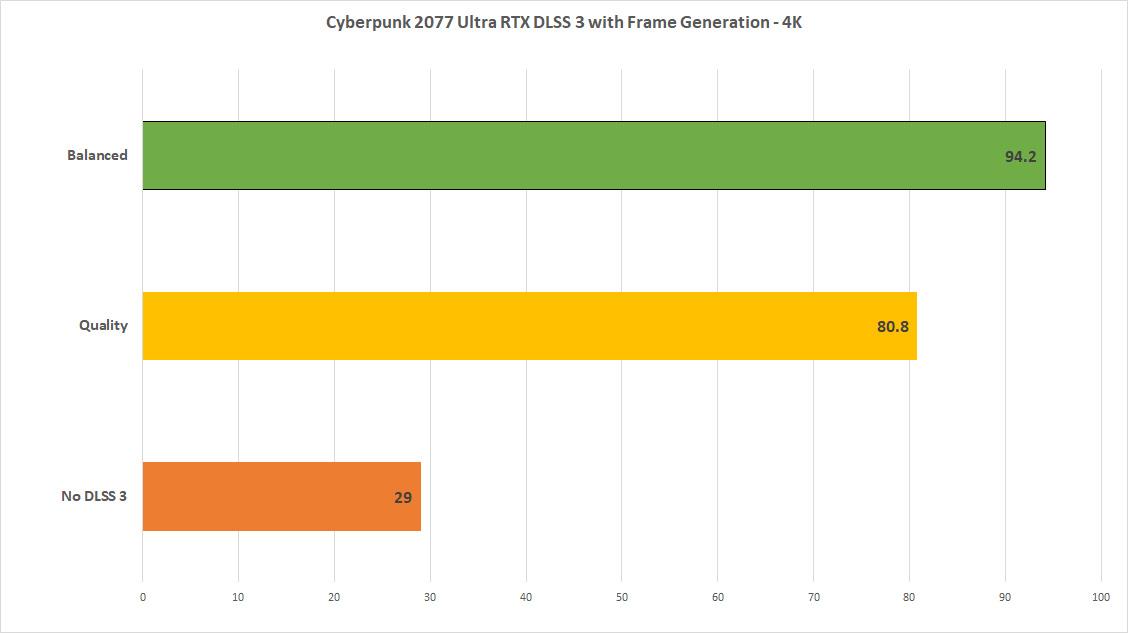 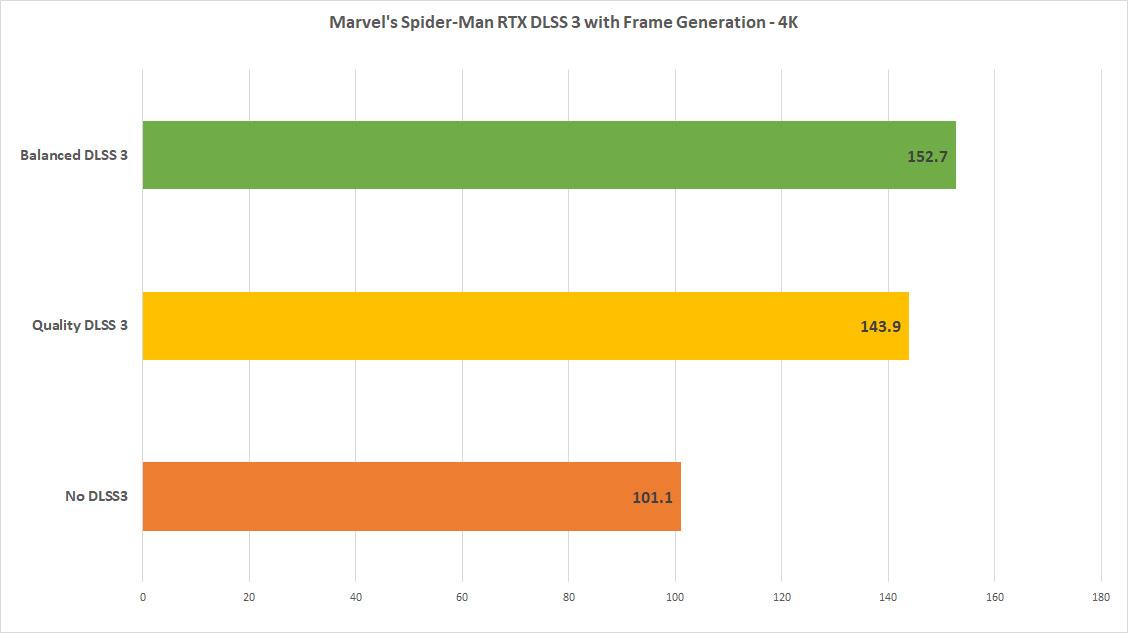 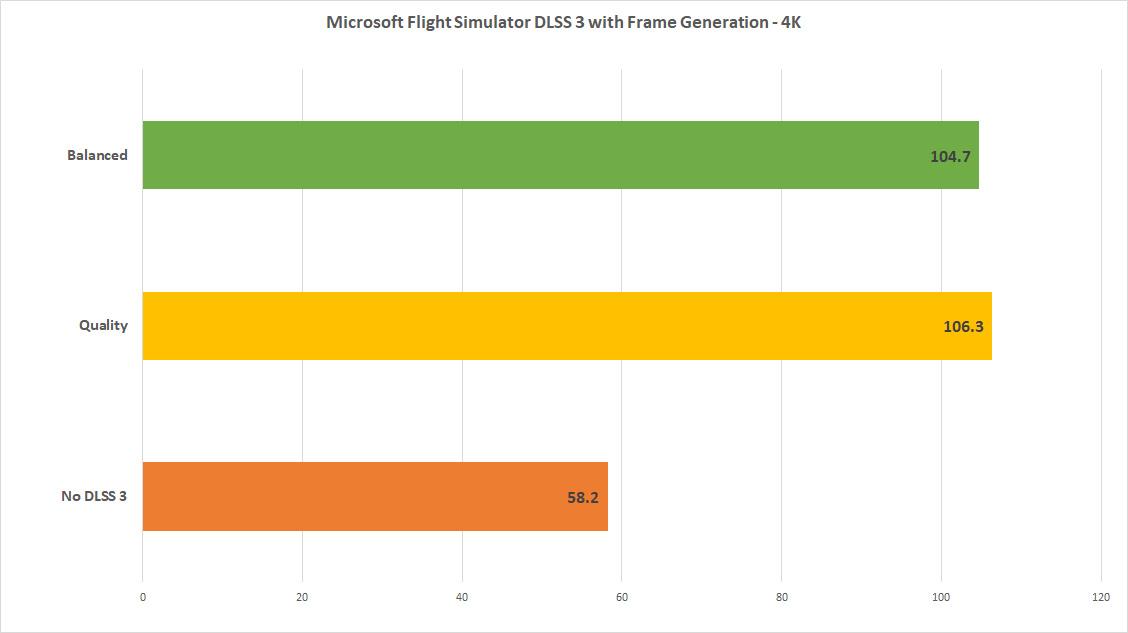 In Marvel’s Spider-Man on the RTX 4080 without ray tracing, there’s a whopping 42.3% uplift with Frame Generation and 51% when going to Balanced quality. Microsoft Flight Simulator is the big winner here with almost doubling the performance of straight rasterization. I found the Balanced and Quality settings to be pretty similar in performance in Flight Simulator, with the Quality setting being a little bit of a better performer to just be noise. A Plague Tale: Requiem does double the performance of with DLSS 3 Frame Generation at 112.4% when running in Balanced settings. At a small latency hit, you’ll get great frame rates with some minor image artifacting if you are looking for it. But who’s staring at frames when you’re playing a game and DLSS 3 with Frame Generation works pretty well in these three titles along with Cyberpunk 2077.

There’s a nice wide gap in performance in DLSS 3 between the RTX 4090 and RTX 4080 that NVIDIA left for a theoretical RTX 4080 Ti card. We can probably guess that’s coming, and with these two cards currently being the only ones available with DLSS 3, NVIDIA has made room for a card to come in down the line to take that place. 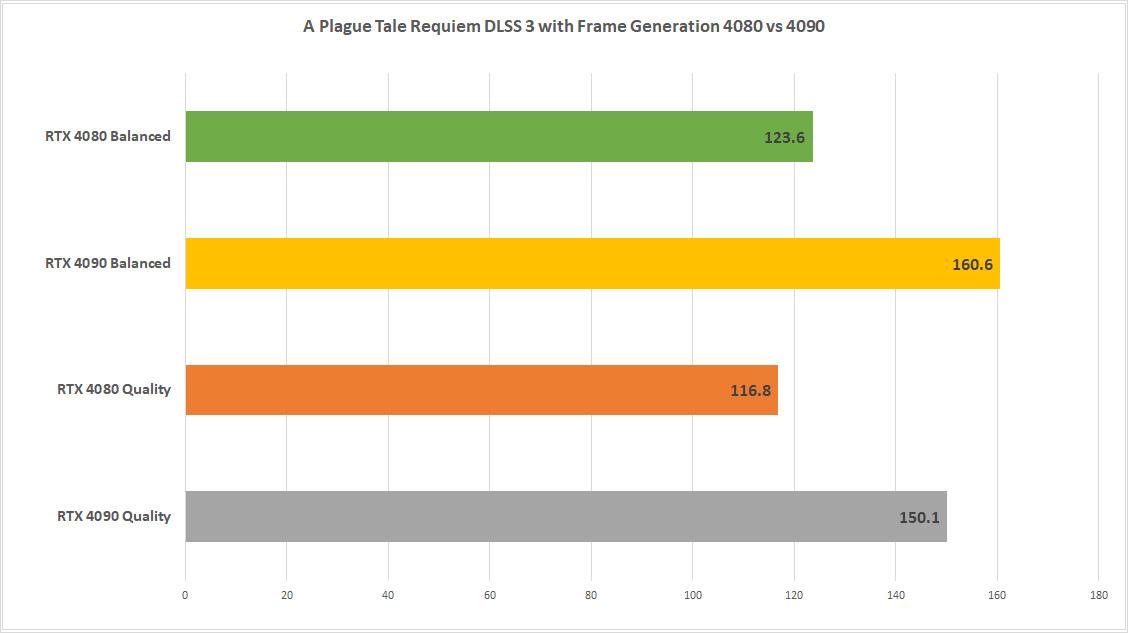 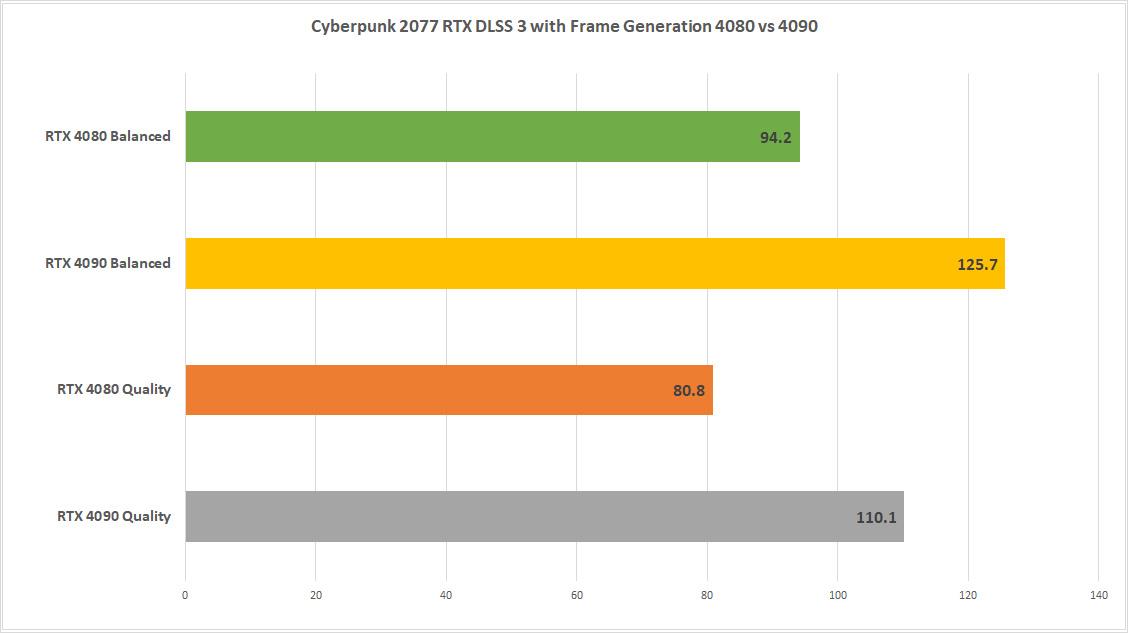 Power wise, the RTX 4080 does a good job at drawing less power while providing more speed. Frameview showed that the card never maxed out at 320W when gaming. Depending on the game, it ran lower and in the case of Microsoft Flight Simulator with the game being CPU bound, it was a lot lower even with DLSS 3 with Frame Generation on. Games like Control and A Plague Tale were averaging around 300W of power usage while Cyberpunk 2077 averaged around the high 280s and low 290s. Microsoft Flight Simulator averaged in the low 190s with DLSS 3 Frame Generation turned on,which is quite impressive. To run with less power than the RTX 3080 Ti is impressive and even more impressive that the RTX 4080 will perform so much better without needing to draw as much. The gaming public was upset about the rumored power usages of the Ada Lovelace cards, but it’s good to see the RTX 4080, like its big brother the RTX 4090, be more efficient with power usage. Of course, I’m strictly talking about non-OC Founder’s Edition cards and not AIB variants that put their own spin on the specs.

The one thing that’s going to hold people back on this one though is the price. Remember when the RTX 3080 was announced and it was priced at $699? That’s a big jump to $1200 for the RTX 4080 in that class of lineup. The RTX 2080 was released at $700 and the GTX1080 was $600. That was the price point that NVIDIA was trending on with this segment and while I wasn’t expecting the RTX 4080 to be $700, I was hoping to be around the $750 to $800 range. But as you know, we had a very volatile past few years with chip shortages, inflation, and the crypto mining boom really threw off what people would pay for video cards. 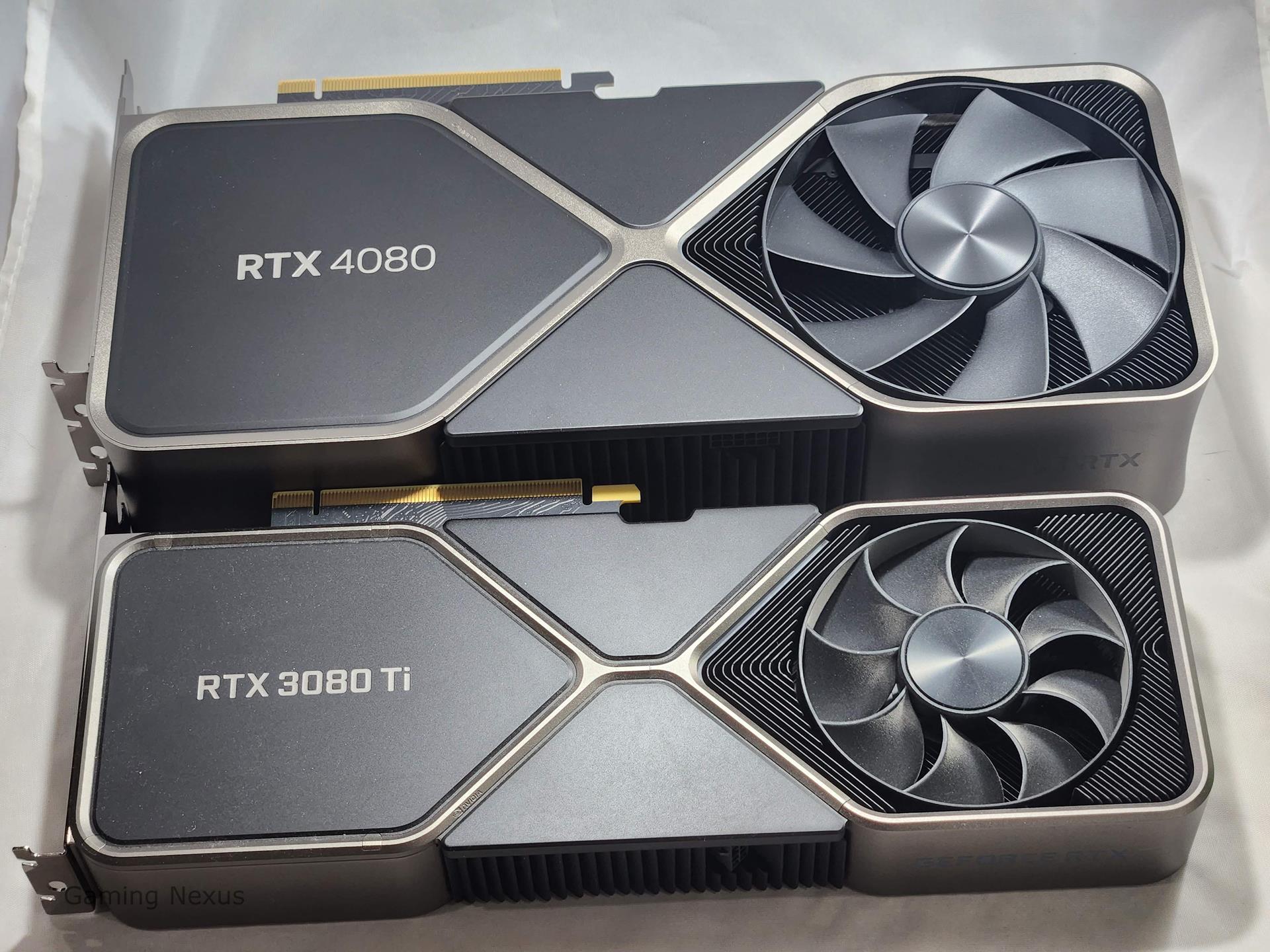 In the end the GeForce RTX 4080 is a more power efficient and performant card over the GeForce RTX 3080 Ti, as well as being able to run DLSS 3, which is really good for some types of games. Would I recommend the card at its current price point? That’s a tough one, and in the current economic climate, I would say that there are better cards out there if you don’t need DLSS 3 and AV1 encoding. Pricing aside, it’s a fast card with some great features. If it was priced in line with what their past offerings were in the XX80 segment, I’d say it was a no-brainer. At $1200, if you really want an Ada Lovelace card and can’t find an RTX 4090, then this is your only alternative currently. Launch is tomorrow and we’ll see if the card sells as well as the RTX 4090 did on launch day.

The GeForce RTX 4080 is a solid card and runs really fast. The GeForce RTX 4080 has speeds that would bring a smile to any gamer's face. The price though is a different matter, and that will certainly have an impact on those looking to purchase this one.