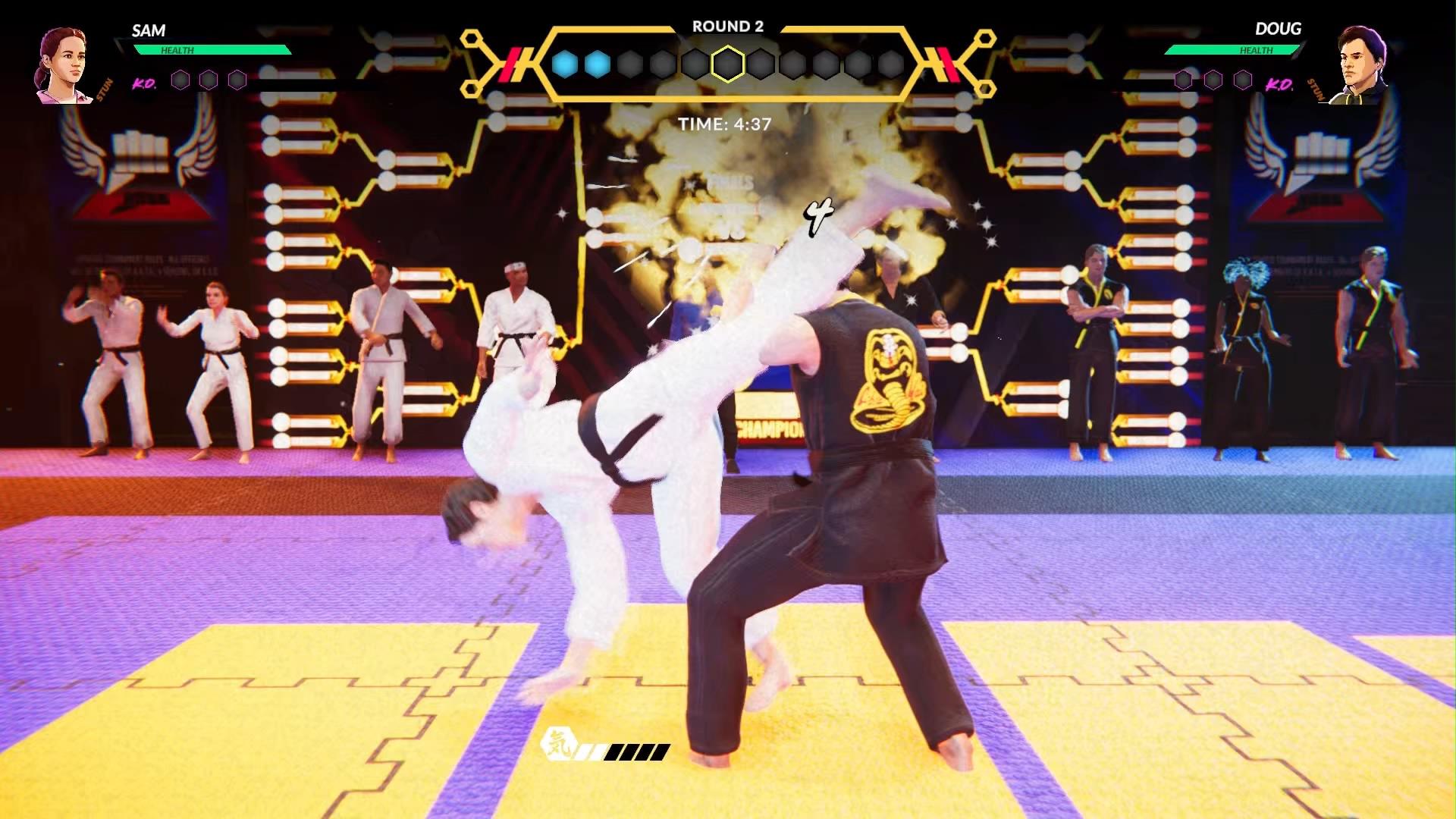 There are some games that you play that aren't great, but you can still have fun with them. There are some games that you know are bad, but you try to get as much enjoyment out of them as you can. Then there are games like Cobra Kai 2: Dojos Rising. Games that make you ask, what did I do to deserve this? Am I being punished? Why? I love the Cobra Kai Netflix series and I actually liked the first game for what it was, so of course I wanted to check out the second game in the series. Oh boy.

Full disclosure for this review, I didn't finish Cobra Kai 2 because I couldn't. Cobra Kai 2: Dojos Rising is loosely based on Season 4 of the Cobra Kai Netflix show. The challenge has been laid down, the All Valley Karate Tournament will determine which dojo will reign supreme. Miyagi Do, Eagle Fang, and Cobra Kai start building up their dojos before the ultimate showdown at the tournament. You start the game off by choosing one of the three dojos in the game. Like the first game, a number of actors, but not all of them, from the show offer their likenesses and voices to their characters and for the most part they do a good job. There is also a huge number of characters, over 25, from the show that you can recruit to your dojo and play in battles. 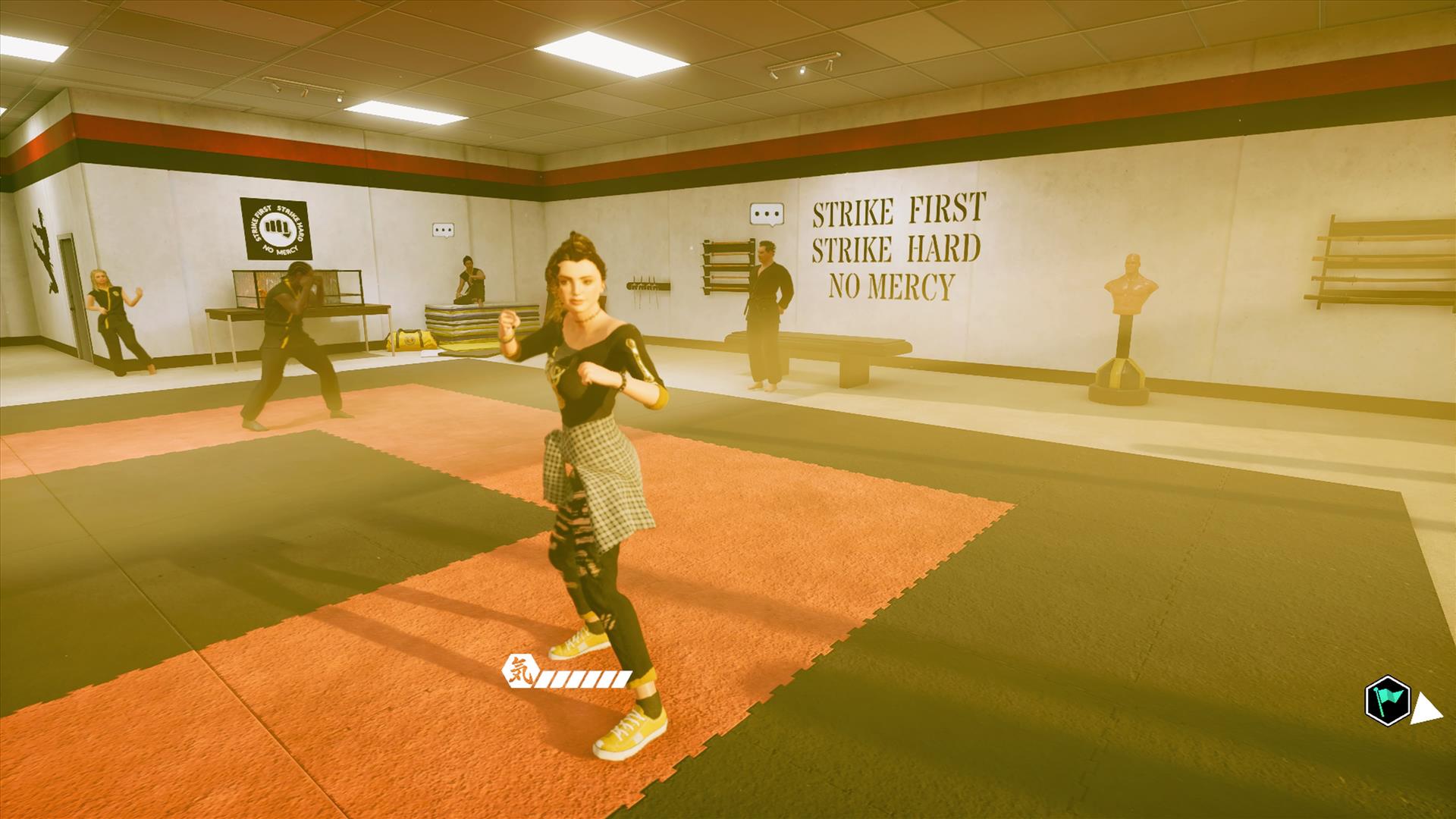 The main part of the game is recruiting fighters and a business management type mini-game where you have to recruit staff members, which will build up your dojo's level. The higher the level the more fighters you can recruit, gain more XP for your fighters, increase your money etc... To recruit fighters you have to pick one of a number of different areas of the map. There are a shopping mall, juvenile detention center, carnival, school and others. You fight through waves of enemies until you make it to the end of the level. These levels are designed to be played through multiple times to gain XP for all of your fighters, and there are a number of collectibles on each level as well. Throughout the level you will find characters you can recruit and you will usually be given a mission to do, as they will have certain unlocking conditions. At the end of each level you will face off against a boss character who can be recruited if you beat them.

The first Cobra Kai game was something of a side-scrolling beat 'em up like Final Fight. This time around, the game is a full 3D beat 'em up like the Yakuza games. By going through each level you will eventually get to parts where you are walled off to a small part of the area and have to fight off a wave of enemies to advance. You are also given objectives to complete in order to recruit certain fighters. Some of these objectives may be to use a certain amount of environmental attacks, complete the wave without taking a lot of damage, or using a certain amount of special moves. Each character has four special attacks mapped to the face buttons and by holding R2. Each attack will also give you a bonus. One attack gives additional XP, one will give health back, one increases your attack damage and the other gives you additional money. These special attacks can be assigned to each fighter. Each time you complete a level, a day passes in-game and you only have around 15 days or so until the Karate Tournament. You can actually go to the tournament right away but you'll just get destroyed since you didn't recruit or level up any of your fighters. 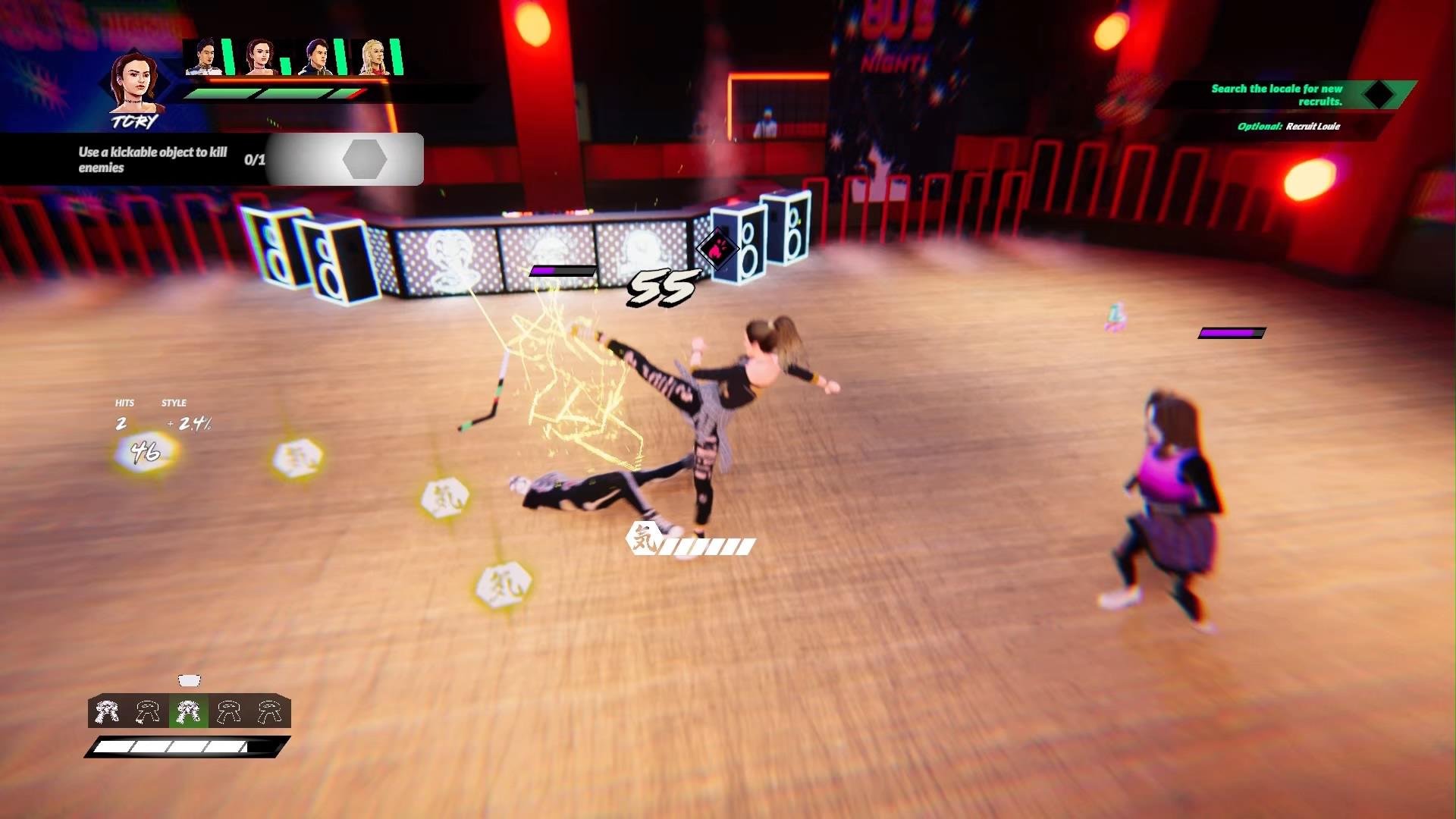 I played through 6 levels or so and attempted a few others... and that's as far as I got with this game. I tapped out. I couldn't take anymore. There are so many glitches and game breaking bugs that it's clear that this isn't something that can be fixed with a simple patch update. This is a WWE 2K20 level of broken that feels like the game wasn't even close to being finished before it was released. It's completely unacceptable that this game was allowed to be released in this state. For instance, one of the biggest issues with this game is that enemies will constantly get stuck in walls or floors and you can't beat them. Sometimes they just won't even show up at all. Since you can't get to them, you can't advance through the level, since invisible walls go up anytime you get into a fight. So you are stuck. Normally when this happens in a game you can reload the last checkpoint to fix it. Not here, the same thing happens every time. It seems like the only way to fix this is to quit out and restart the level from the beginning again. This happened so many times that I finally just said forget it. I'm not going to subject myself to more of this for the sake of a review. 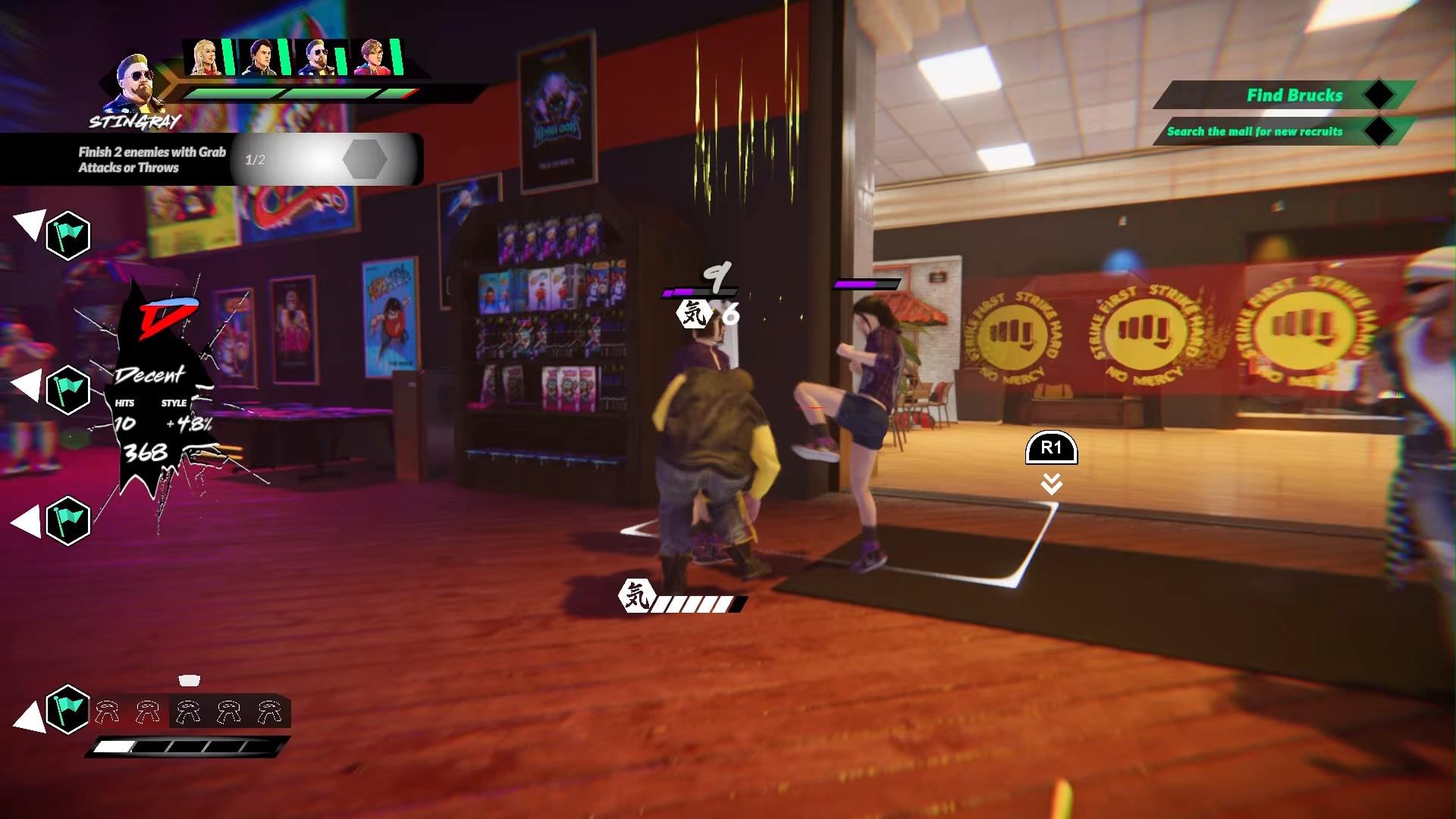 And its not just the bugs and glitches, this game also controls horribly. Unlike a good 3D beat 'em up game like the Yakuza games, none of the attacks or any of the battles feel fun to play at all. The camera will be your worst enemy as it whips around constantly, making your character fly in all different directions when trying to fight. It just all feels so clunky and even worse, oh my good lord, the framerate will absolutely tank during fights. I played Cobra Kai 2 on a PS5 and I was terrified the game was going to constantly crash, because the framerate would drop to what seemed like single digit numbers. The game even froze a few times, like when you try to play a PC game with a potato rig. Even doing something as simple as navigating the menus can be a gigantic pain in the ass, as menus just... stop working? Yeah, sometimes you can just get stuck on menus where nothing works. The back button, okay button, scrolling, nothing, forcing you to once again reset the game.

There are a couple of other game modes in the game but they aren't worth playing. The first one is where you get to relive memorable moments from the Cobra Kai TV show. All two of them. Yeah, the only two moments here are the school brawl from the season 2 finale and the biker shop fight where Daniel LaRusso and Johnny Lawrence team up as they are looking for Robbie in season 3. Neither of these are fun due to the awful fighting engine. There is also a survival mode, nothing much to say here. Pick four characters and fight off as many waves of enemies as you can. 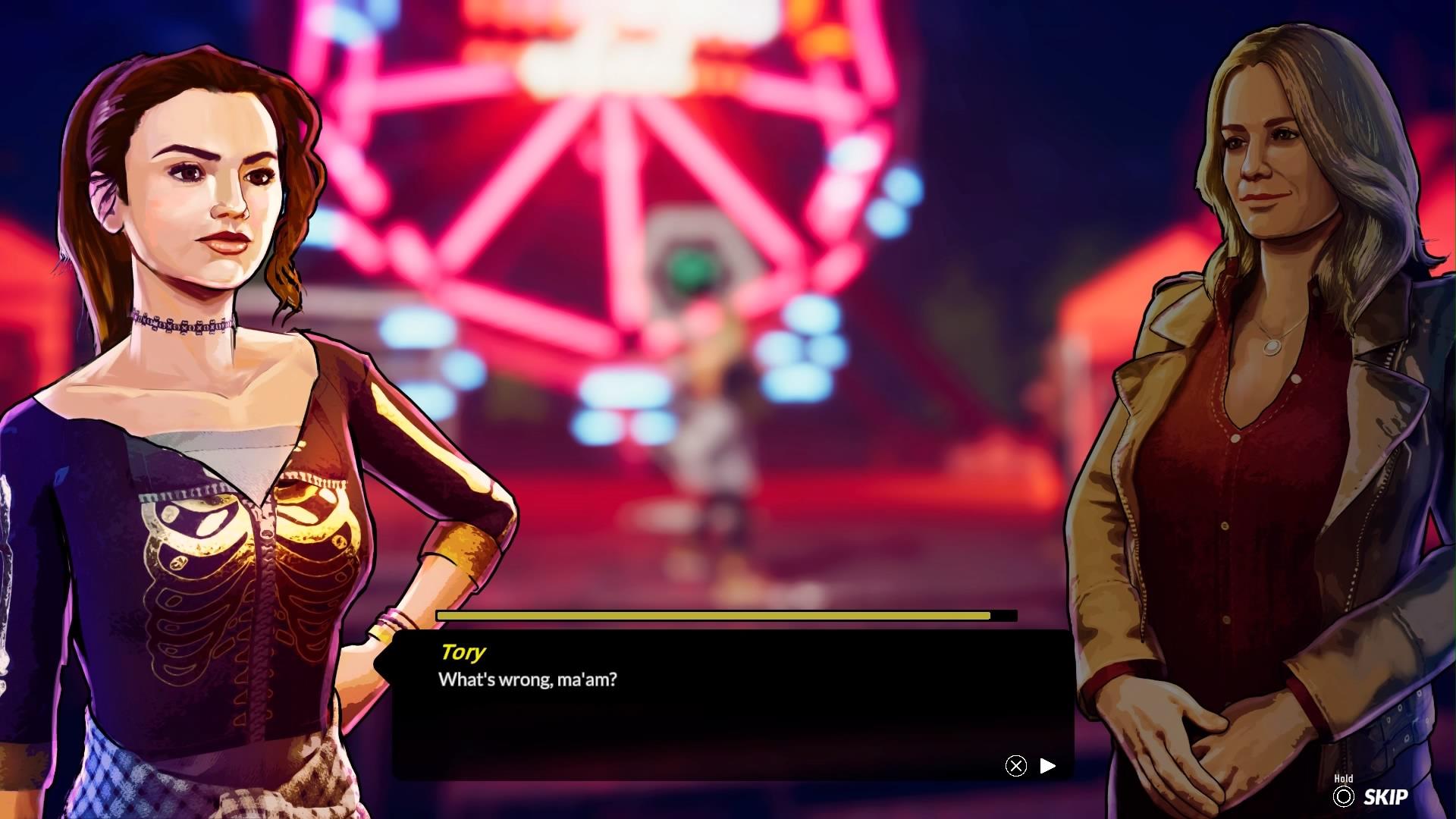 Finally, we have the Karate Tournament which can be played in multiplayer but you really wouldn't want to. It's like they tried to make a fighting game like Tekken. You can choose from the 25+ characters here and play through the tournament, but as soon as a match starts... here we go. First off, the characters feet clip through the mat up to their ankles, making them look like the characters from Fire Emblem Awakening. As soon as you walk you quickly glide over the map like they are walking on slippery ice. Seriously, it's something that has to been seen to be believed. Everyone moves around so fast that both you and your opponent will just be kicking and punching through each other as everyone flips around. The character has a slow-walking animation and they whiz around the map like crazy. Score points by getting knockdowns, or pushing enemies out of the map, but the terrible fighting engine rears it's ugly face here too.

Cobra Kai 2: Dojos Rising is one of the worst games to be released this year and certainly the worst I played, for the sheer simple fact that this game is fundamentally broken. It is not worth your money, especially with a $50 price tag. It's a damn shame, because I actually enjoyed the first game despite it's flaws.

100% unacceptable. Glitches and game breaking bugs left and right. This game should have never been allowed to be released in this state. It's a shame really, because while the first game wasn't amazing, it was decent for what it was. Cobra Kai 2 is a complete failure at almost every level. Stay far far far away from this game.