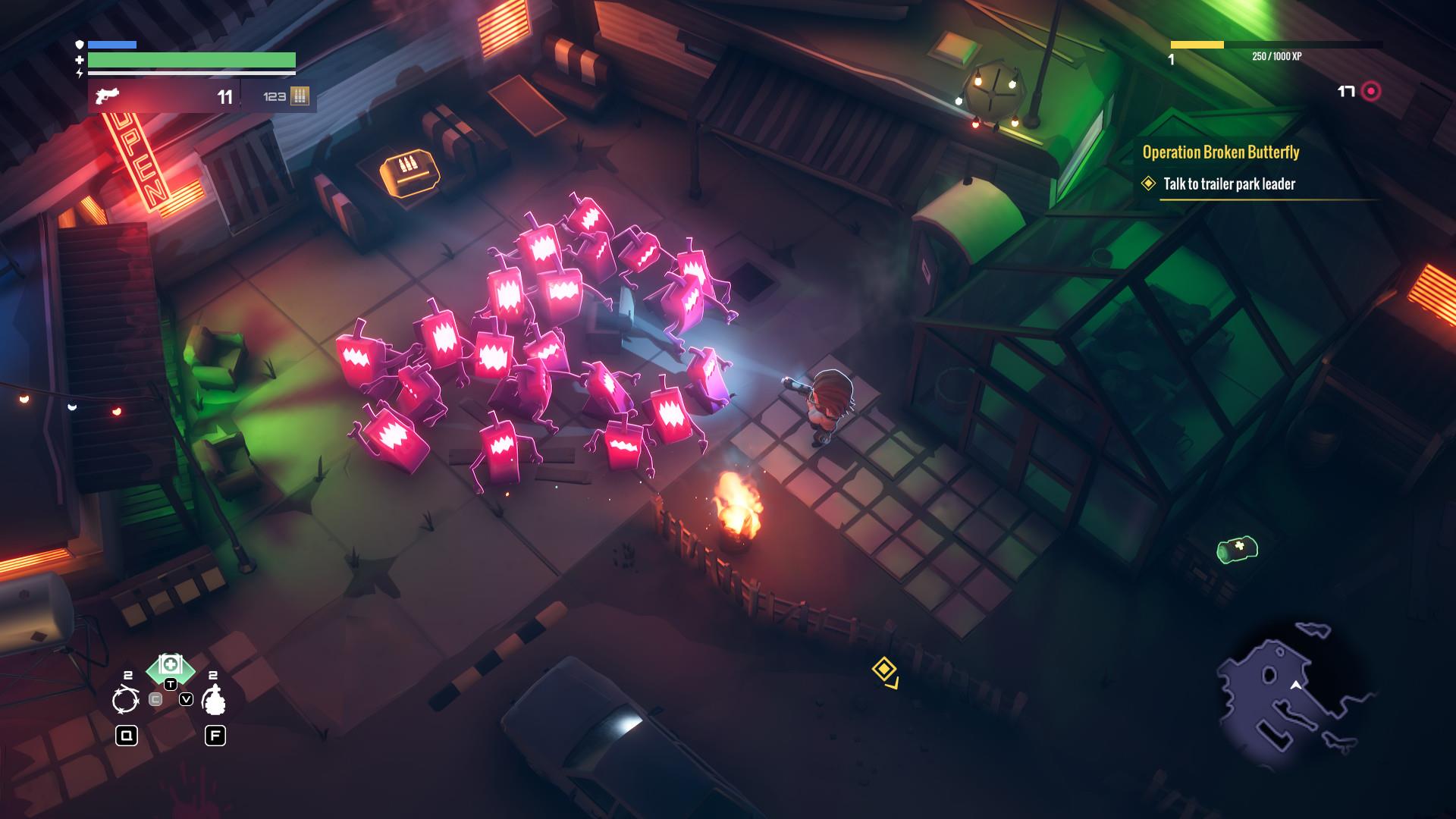 As a fan of top down shooters since Smash TV, and most recently Enter the Gungeon, I tend to gravitate toward any game that uses the formula. Endless, variable enemies, bullet hell, and of course, multiplayer is always a plus. I first saw From Space on the Twitter machine and was immediately interested in Triangle Studios' project. This is the same studio that released "It Came From Space and Ate Our Brains." in 2015, and their PR says that this is a spiritual successor, much more simply titled From Space. Unfortunately for the Nintendo Switch version of this game, the simplicity kind of stops there.

From Space opens up with a cinematic to get you ready to take down some pink space aliens. The year is 1986. A Crystal Meteor hits the earth, seeming to cause no damage. But the aliens that follow it are the ones who decimate the masses. They want those crystals, and it is up to you and your squad of 6 to send those alien scum back where they came from. Space. The game then kicks you into a character select screen. There are two defensive characters, two offensive characters, and two supportive characters. All have their own perks, and arsenal with them. The flame trooper and the goal keeper are the way to go. Trust me on this. They both come with a rechargeable shield, for when you take those very unfair hits.

Out the gate, the game takes you into a tutorial mode. The tutorial will teach you the absolute basics. Right stick to aim, left to move. But this is not a twin stick shooter. You have to hit the trigger to shoot. It's not terribly jarring, and you definitely get used to it. But again, not a twin stick shooter. You can toss grenades too, and use different side items, with L and R, depending on what is in your slots. You start with grenades and barbed wire. You do have a melee attack as well, and this uses stamina. From the jump, you get about two good punches before you're in the red. There are also barrels, and cars that can explode and take out multiple enemies. Also, do NOT try to move ahead of the tutorial without talking to the NPC first. You will be locked out, and have to start all over. After you finish each section, the NPC will take you to the next part. Follow him at all costs, and be sure you talk to him again before you begin the next part. This should take you about 5-10 minutes tops, unless you didn't read this. Then it's an easy 20. The last thing it teaches you is to save. Save often. If you do something, save. If you leave a safe zone, and you get an upgrade, save. Just...always save.

You get into the meat of the game, and this is where your missions start. The game teaches you to heal when you press up on the cross pad. The very second you start, you want to open your settings. Turn film grain, depth of field, and Chromatic aberration off. For some reason, turning these off make the game a MUCH smoother experience. Not a 60pfs experience like the Steam version, but much smoother over all. You HUD will tell you where you need to go, by way of a yellow diamond on the screen, and in the top right hand corner. If you're playing this handheld, the text is very small. and if you're playing this on an 55" OLED on your couch, the text is still very small. Follow the diamond. Talking to the NPC's can get a little lengthy, but they have what you need to move on, so do that, and not necessarily with everyone. The game teaches you a dash, which is sort of like a dodge, but it too uses stamina, and that's a one and done until it refills. Once you use the gate key, you get your first close encounter.

Every time you encounter a new enemy, the game plays a little cinematic, telling you that you're not welcome here, and shows them off a little bit. The first enemies take about four to five shots apiece to take out, and they drop in-game currency, and ammo. Sometimes they drop health too, as well as special weapon ammo. And yes, you can run out of ammo. Though ammo chests are available throughout the game, do NOT run out of ammo. Just do not. It takes a bit for the ammo chests to respawn, and you're running around trying to melee your way to a surefire death. Pick up everything. Even if you can't hold it. Just pick it up. You encounter more enemies as you progress, and they get bigger, and badder. They are also out to get you, and sometimes feel a little unfair.

Back to the safe zones for a second. Within the safe zones, the aliens cannot come in. Here you can refill your ammo, find hidden weapons, and of course, save. You can change your character, you know, if you want to die faster. You can also upgrade your perks and weapons, as well as buy new weapons from merchants. There are also NPC's within the safe zone that will ask you to do something. Some of the missions won't "activate" until you tell it to activate the mission. I don't mean "accept" the mission; you have to physically activate the mission by holding a button. Sometimes they'll even come with you, but then you have to tell them to come with you, or stay put and not get smacked around, only to have you revive them when they get hit like three times. They try to help, but the best way is to put up a shield dome, and fight alone. 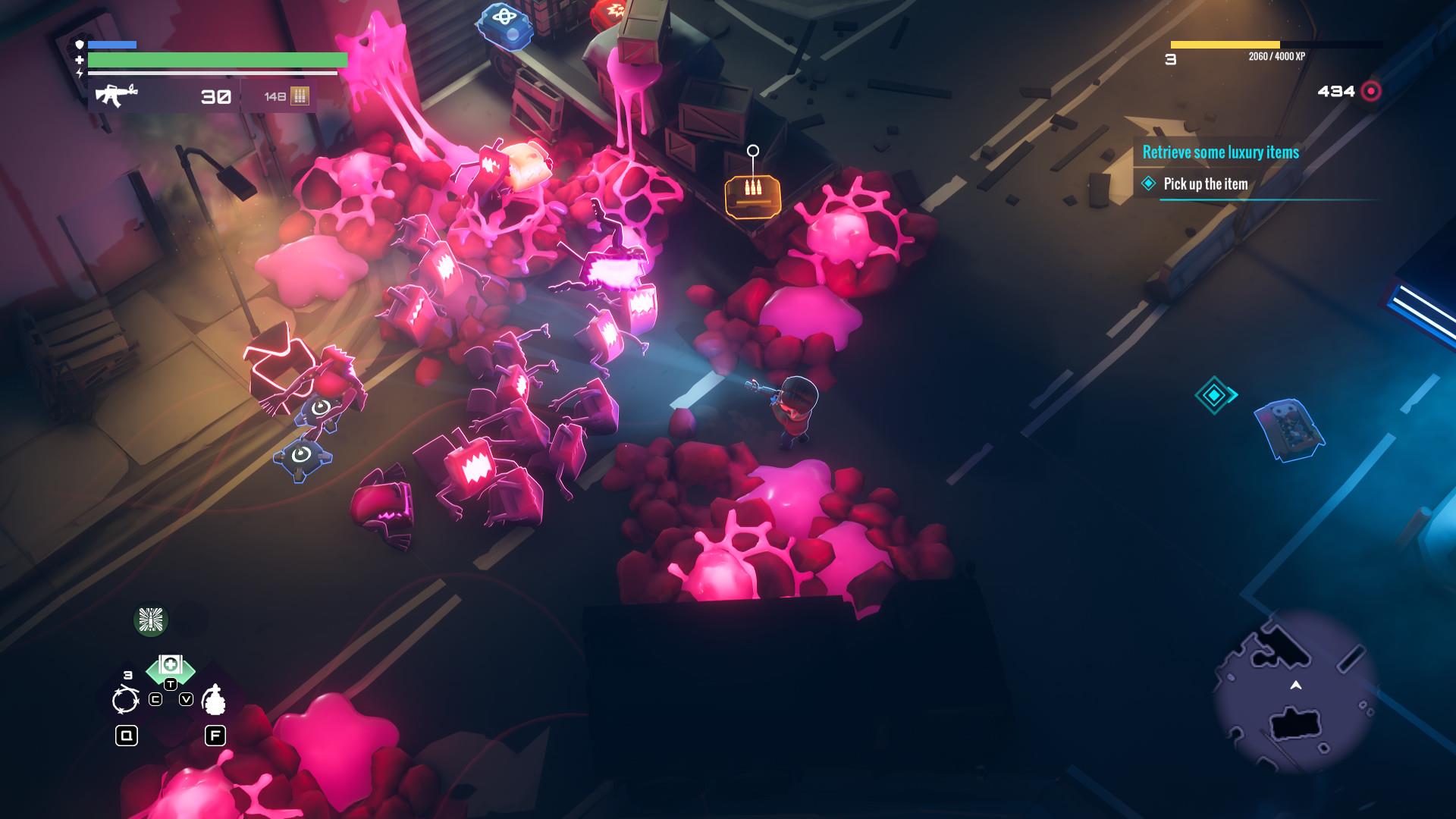 As you progress through the game, you can level up. Everyone levels up across the board, unlocking a special weapon at level 6. The minigun for the character you should be using all dee time is the way to go, but only use that on the bigger aliens, like the one with a shield, or the big boss aliens at mid levels. You can also level up the weapons you have in your inventory, but only per character. That means every time that character picks up a shotgun, the perks that character upgraded go with it. See? Sticking with one character doesn't sound so bad now, does it?

There are also in game events called "Drop Pods Events". This is where aliens come down by the UFO loads, and you get to destroy them all. The more of these events you do, the lower the alien influence becomes. This also helps you level up. Helping people get to places, shooting eggs and random aliens works too. Though minimal, shooting crystals lowers the alien influence as well. Alien influence makes it SO MUCH easier to beat the in level boss, and is indicated by a thin purple meter at the bottom of the screen. Lower that thing. 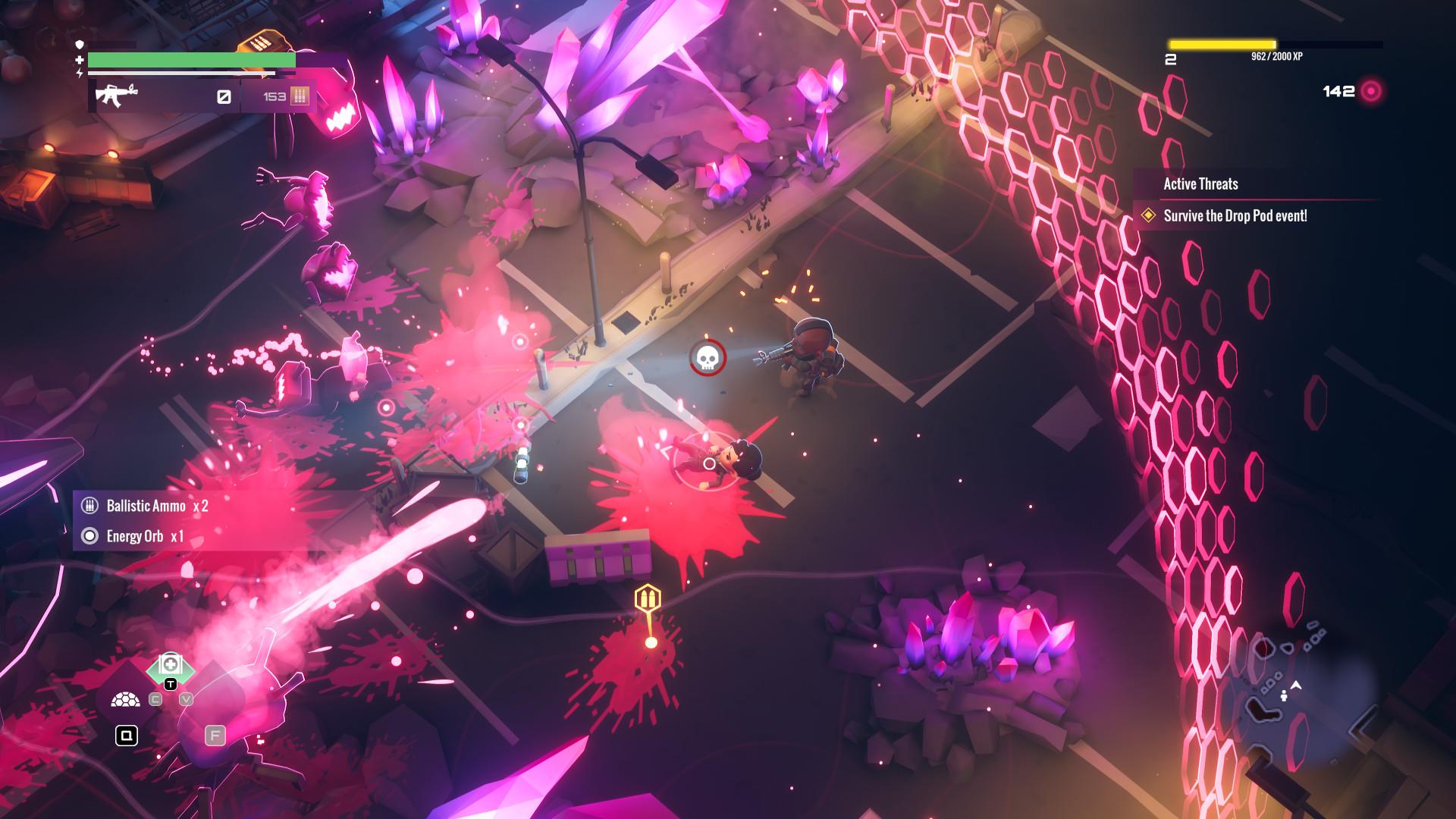 The map is indicated on the bottom right side of your screen, and fills as you move about. You will find it best to find a couple of safe zones first before you go exploring willy nilly. It does fill as you explore, and you can open it up with a click of the inner menu. This menu also shows you what missions you're on, the weapons you have, the sub weapons (items) you have, and your perks. You can get up to five perks, and they vary from an explosive dropped clip, to even maximum health. All your items are listed here too, and you can cycle through those in game with the right and left crosspad directions. You can hold up to six weapons at maxed out levels, and again, you can cycle through these in game with a button. Don't use the special weapon unless necessary. Finding ammo for these weapons can be hard to come by. Using the in game currency (pink dots) will help you upgrade weapons and perks at workbenches, and you can straight up buy them from merchants.

There are pick up items EVERYWHERE. If you need ammo, walk around a bit to find it. If you need to get through a door or gate, you can usually find it close by, or by simply talking to an NPC character. Your life can be refilled at anytime, as long as you have some in the reserve. You can pick up health packs in the game to do so, but if it's full, they stay. This is also a thing with ammo. If your weapon is full, you can't pick up ammo. If your items are full, you can't pick anymore up. This is ok, because then I just waste things to pick up cooler ones, like a stationary Gatling gun, and a shield dome for my very fragile friends, And speaking of friends, you can start an online campaign at any time with up to 3 other friends. You can do it from an in game phone booth (cause it's the 80s), or invite a friend in the menu. 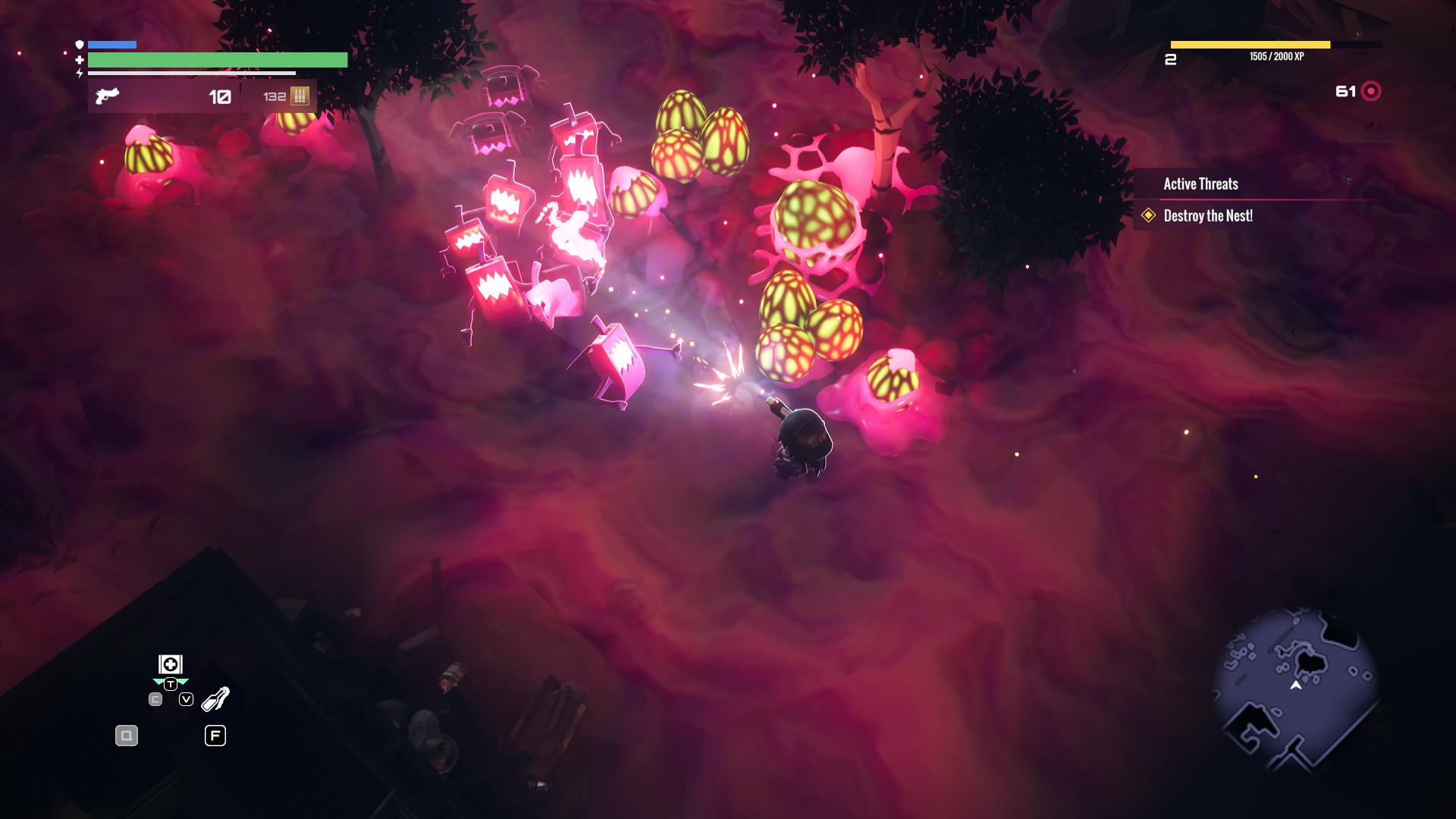 Unfortunately, with all that said, the game on Switch seems very sluggish compared to the Steam version. The slow down with too many enemies on the screen allows unfair shots to happen. The NPC's that follow you will weigh you down, and sometimes not even attack. The weapons upgrade system is a GRIND, because there is too much to spend your pink dots on. You might upgrade everything once, but all upgrades become pricey from there. I reiterate, but save often. Sometimes, in mid mission, there's a side mission that sends you into a trap, and then you die, and have to start over from the last save file. You're so ramped up from the action, that you don't even realize you didn't save, or you thought you saved.

The missions seem long and cause a lot of back tracking, but if you don't do them, you run short on money, and the alien influence being lowered by missions lowers your odds during the final boss of each level. I wish I could say the game was brutal because of this, but at $15, it's brutal for all the wrong reasons. The characters even move even slower depending on what weapon they have, and the melee never works. This game runs so much better on Steam, to the point where you'll be spending more time grinding to build your abilities against the slowdown in the game then actually proceeding through levels.

From Space is a challenge, but probably not in a good way. Between all the perks, items, weapons, specialists, and all the other things you have to do to even play the game, it is a little more tedious than fun. I waited for a patch, and to no avail. As of now, From Space needs a little more time in the UFO.