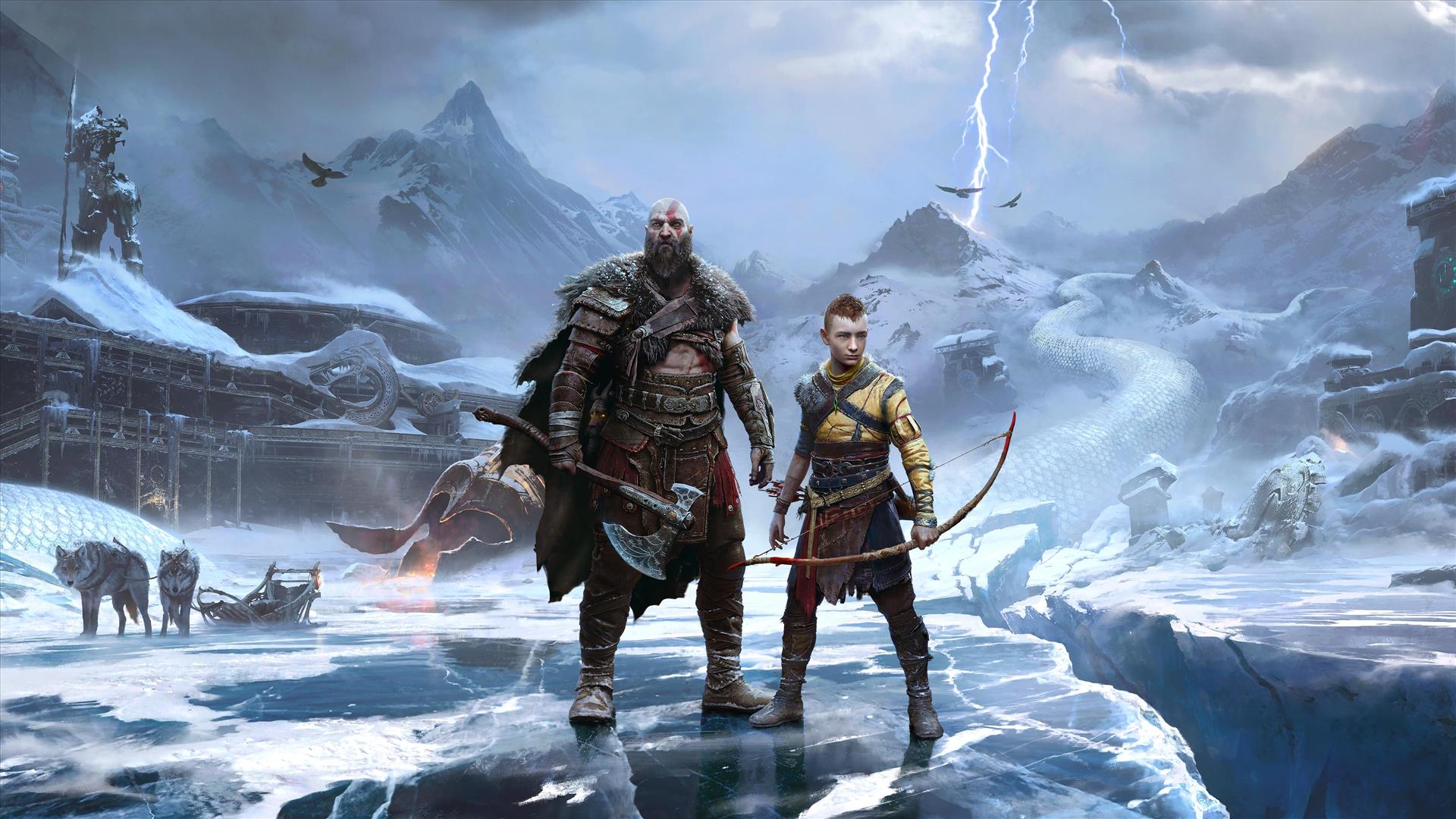 Video games are a pivotal and influential form of art that grow ever more prominent with advancements in technology. They serve as a contemporary interactive medium for passionate creators to share the fruits of their imagination. Some focus on telling a compelling story, displaying in-depth gameplay mechanics, or showing off visually stunning cinematics, but very few are able to achieve excellence in all categories to make up a complete experience. Sony Santa Monica Studio's 2018 reboot of God of War is one such game, taking everyone by surprise and becoming the genre defining game of the last generation. It was lauded in many circles as Game of the Year for its endearing narrative, fleshed out combat system, and just about everything else.

Since then, the weight of the world has been on the shoulders of the developers for the long awaited sequel God of War Ragnarök. The question on everyone’s mind is: does it measure up to the bar set so high by God of War (2018)? No, Ragnarök doesn’t measure up to it, but instead greatly exceeds expectations. The highly anticipated continuation of Kratos and Atreus’s journey not only expands on the many combat and puzzle systems established by the former, but continues to effortlessly deliver an emotional narrative adventure filled with twists and turns. Not to mention that the dazzling gorgeous graphics, outstanding soundtrack and voice cast, and excellent performance make the overall experience phenomenal. 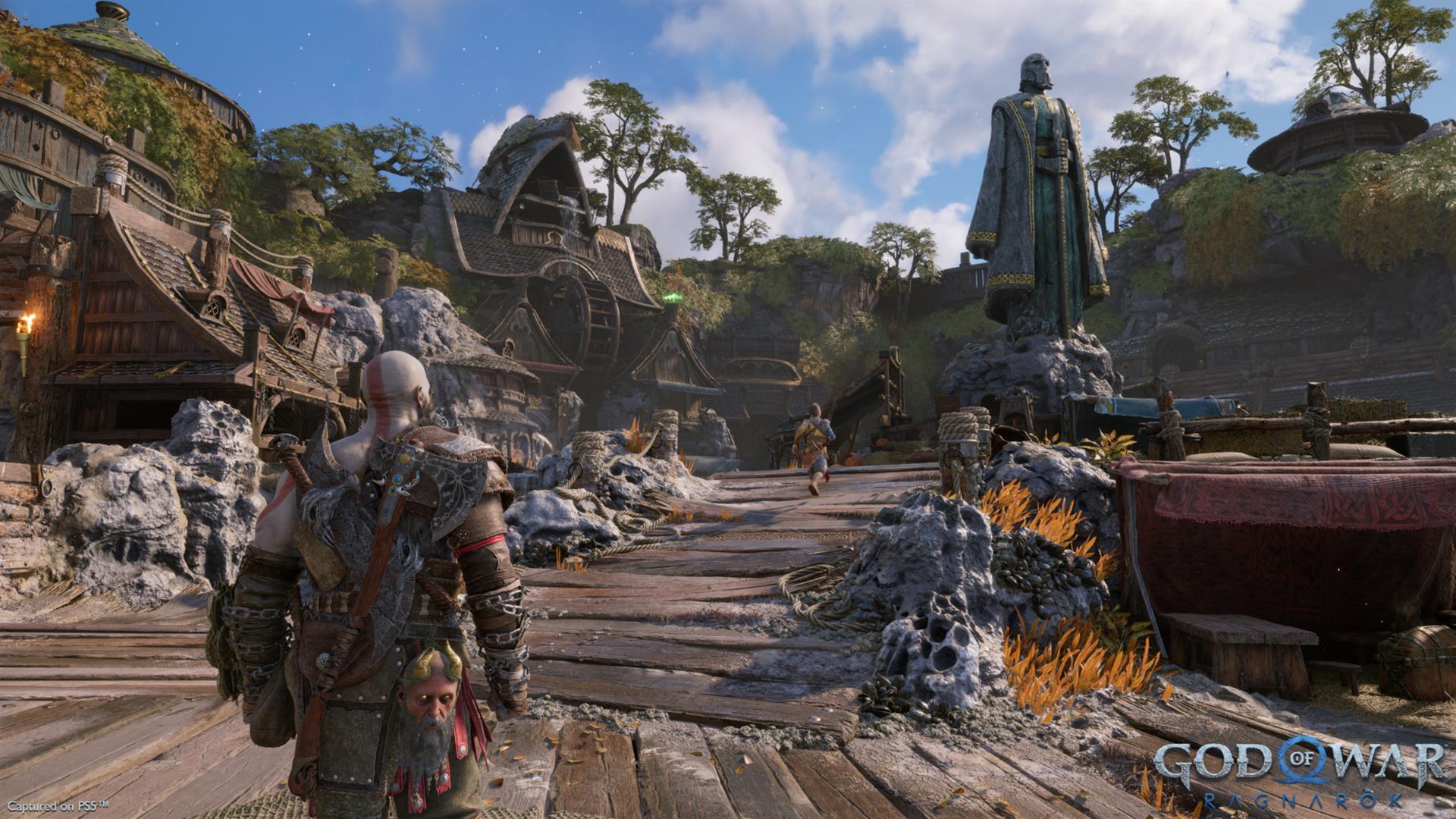 As a quick refresher, God of War is a third person action adventure game set in the realm of Norse mythology. You will no longer be seeing the pantheon of Greek Gods like Zeus or Athena as you did in the older games, but instead will come face to face with the likes of Thor and Odin. And no, they are not at all the heroes as they are portrayed as in the Marvel movies. The Gods in these mythologies were terrible beings doing despicable deeds, and it’s refreshing to see Sony Santa Monica Studio portraying them in a more accurate light. God of War (2018) ended with the protagonists killing Baldur, the Norse god of light and purity, and consequently kicking off Fimbulwinter. God of War Ragnarök immediately picks up where the previous game left off, showcasing some amazing set pieces and performances from a cast made up of both returning characters and new ones. I am ecstatic to see Christopher Judge and Sunny Suljic reprise their roles as Kratos and Atreus, as they both pour their heart and soul into portraying these characters.

The single-shot camera makes a return, allowing for a truly immersive experience that seamlessly transitions between combat and cinematic sequences. However, crawling through tight spaces, squeezing through cracks, and walking in the Realm Between Realms still disguise loading screens. It was a point of criticism for the first game, but one that I have no qualms over, considering loading screens are inevitable. God of War Ragnarök is still a cross generational game, available on both PlayStation 4 and 5, so it’s understandable it was not built from the ground up with next-gen in mind. Performance on the PlayStation 5 is unparalleled, with ultra fast load times from a clean launch of just a few seconds. Two graphical models are offered: one that favors resolution at 4K 30FPS and one that favors performance at dynamic resolution 60FPS. The framerate can be unlocked and boosted to 40FPS for resolution mode and up to 120FPS for performance mode with an HDMI 2.1 cable and on monitors that support 120hz refresh rate. The visuals are exquisite, even in performance mode, featuring crisp, photo-realistic depictions of characters and environments. Likewise, an entire suite of accessibility options is also available to allow anyone from any background to enjoy this game. 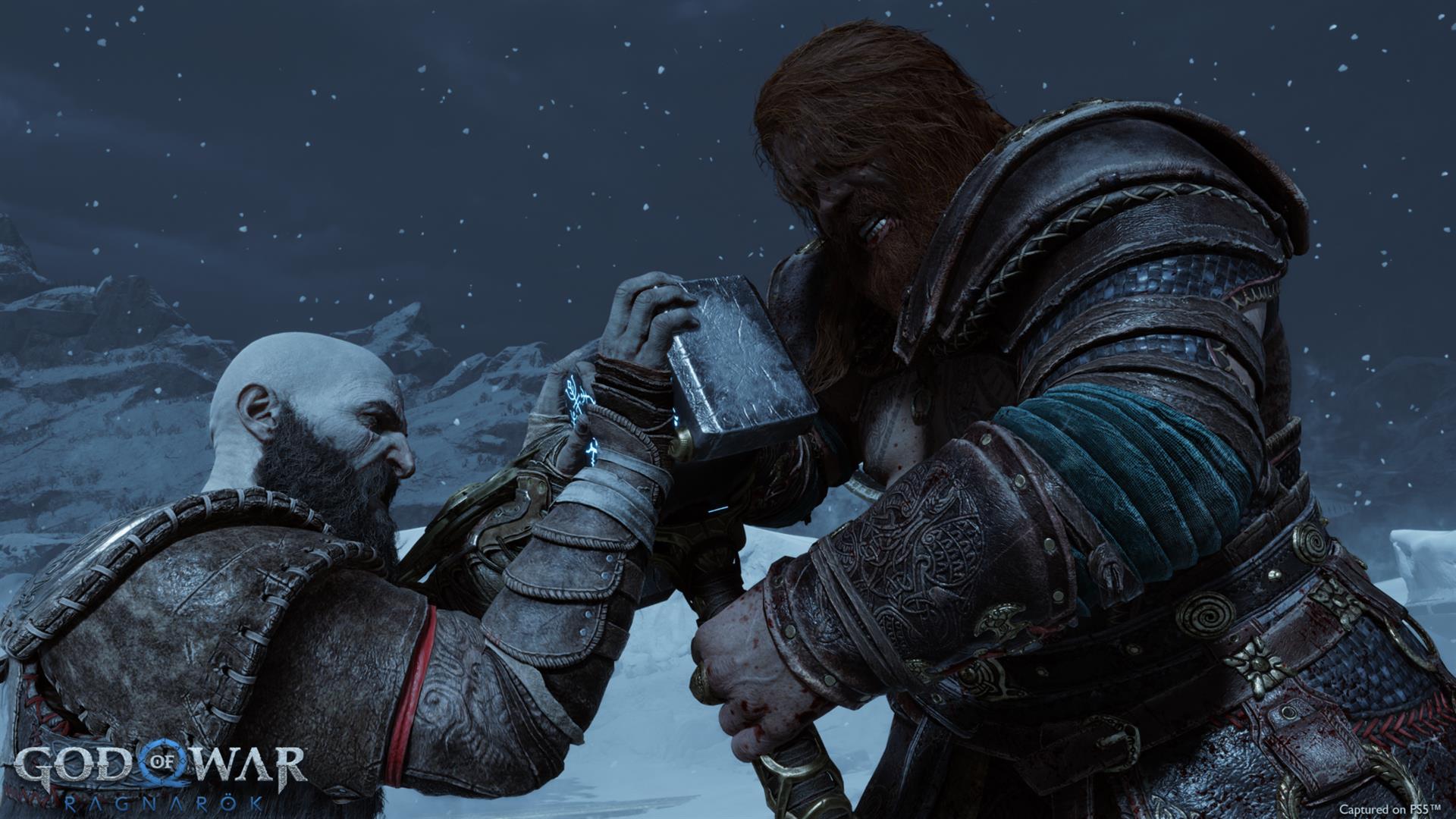 You are able to travel to nine realms in God of War Ragnarök, whereas the first game only allowed six. Note that Asgard and Jotunheim are not accessible outside of main story segments, but you do get to explore both in great detail. Since this game marks the end of the Norse Saga for the God of War franchise, it makes sense that Ragnarök would be packed full of content. My first playthrough took around 25 hours, with some side favors completed, but a lot left to be discovered. My difficulty was set to Give Me Balance (the middle/normal difficulty), and the game was already quite difficult during some fights. Your playtime could be significantly higher on harder difficulties, and yes, Give Me God of War difficulty is back. There are plenty of optional activities to partake in, including endgame bosses and post-game quests. The franchise has never before seen so much enemy variety, from nasty Helwalkers and Draugrs to Einherjar warriors and gigantic wyverns. The first 30 minutes of Ragnarök contain more variety than the entirety of the previous game.

The only semi-open world area in 2018’s God of War was at the Lake of Nine where you could ride a boat to explore, whereas the rest of the game was mostly linear. I’m glad to say that nearly every single realm in this sequel, whether that be in the new realms of Svartalfheim and Vanaheim or the familiar lands of Midgard and Alfheim, has large nonlinear open areas for you to venture through. You are always rewarded for drifting off the beaten path, including getting more hacksilver, a new runic ability, or a Nornir chest containing an Idunn Apple or Horn of Blood Mead. Even those annoying Odin ravens that you spent over ten minutes trying to shoot down with your axe now reward you with special armor instead of some measly experience points. Unfortunately, there is no New Game Plus mode at launch, but here’s to hoping the developers add it later on like they did with the 2018 God of War. Photo mode is confirmed to be coming post launch for free, so get ready to take some shots of the beautiful landscapes across all the realms. Cutscenes are indeed unskippable on your first playthrough, but why would you want to skip this masterpiece storytelling? 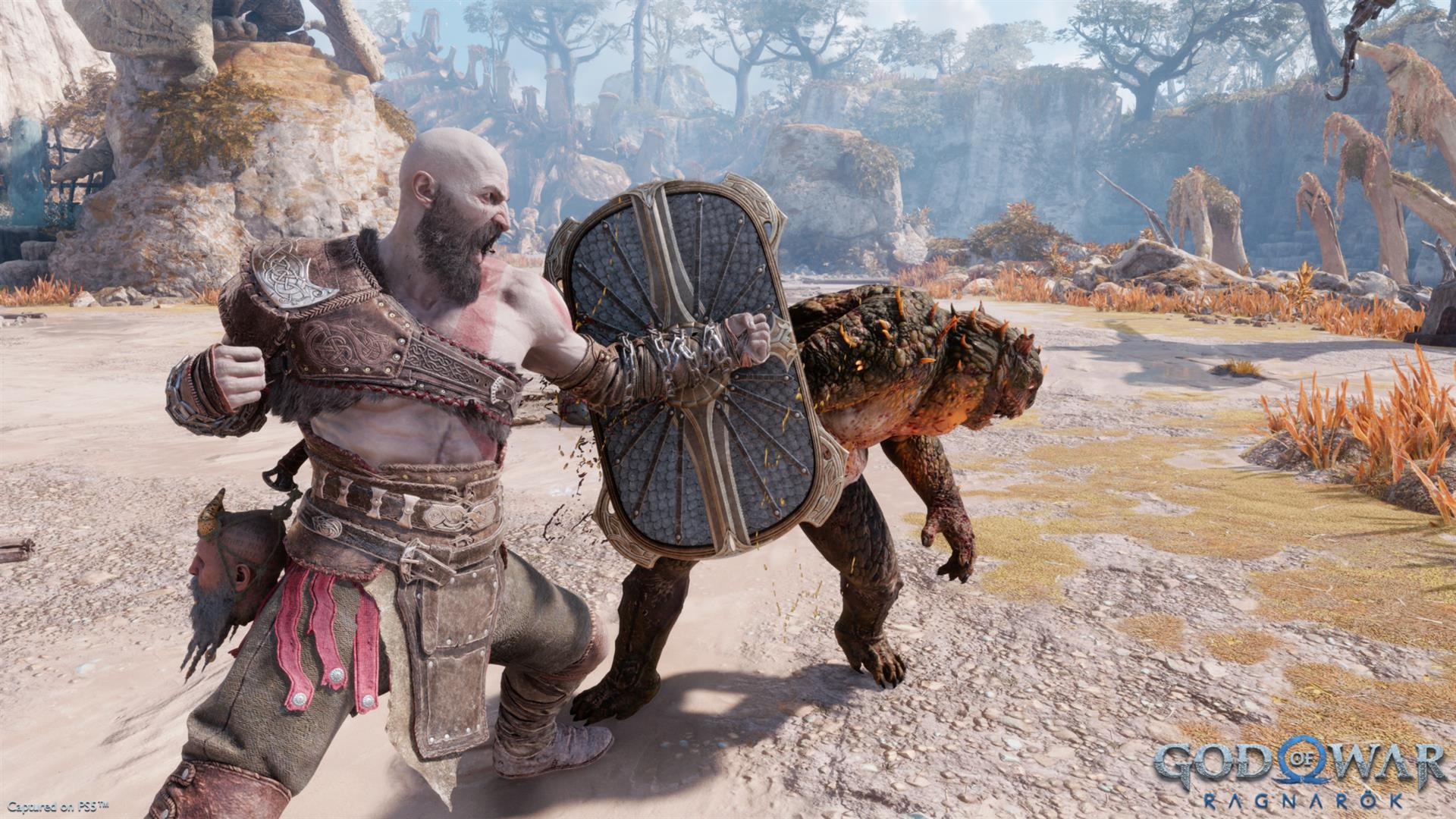 Those who played God of War (2018) will feel right at home with the combat system here. All of the basics are there with your trusty Leviathan Axe and Blades of Chaos. You are sure to remember light, heavy, normal, and runic attacks, rage mode, parrying, and commandeering Atreus to shoot his arrows. The folks at Sony Santa Monica Studio have established a solid foundation for combat from the first game and expanded it extensively in God of War Ragnarök. Kratos still can’t jump, but there is much more verticality introduced in combat encounters, with arenas that span multiple layers, allowing Kratos to swing between platforms or crash down from above with a slam attack. Much more of the environment can also be utilized in battle, with large rocks and trees that Kratos can rip out of the ground to throw at incoming enemies. These improvements may not sound like much by themselves, but goes a long way into adding immersion and versatility to fighting.

Perhaps the greatest surprise to the gameplay part of this game is that Atreus is a fully playable character, with his own unique moves and abilities. I might be the odd one out, but I actually enjoyed playing as Atreus more than Kratos, as he is much more nimble than his father. There’s an entire fleshed-out skill tree for him that includes a grapple hook to pull you in towards enemies, and the ability to slow down time on a perfect dodge or parry. You still play as Kratos for the majority of the game, but just seeing how polished and fun it is to play as Atreus was enough to put a smile on my face. I kind of wish that you could switch between them interchangeably at any point, but I’ll take what I can get. Companions have also been greatly revamped compared to the first game. Atreus won’t be your only sidekick anymore as various characters step in and out, acting as companions during combat encounters depending on the story progression. These companions include both Sindri and Brok, our beloved Dwarven brothers. The AI controlling these companions is also much more intelligent than last time, actively participating in fights and reacting to your moves. 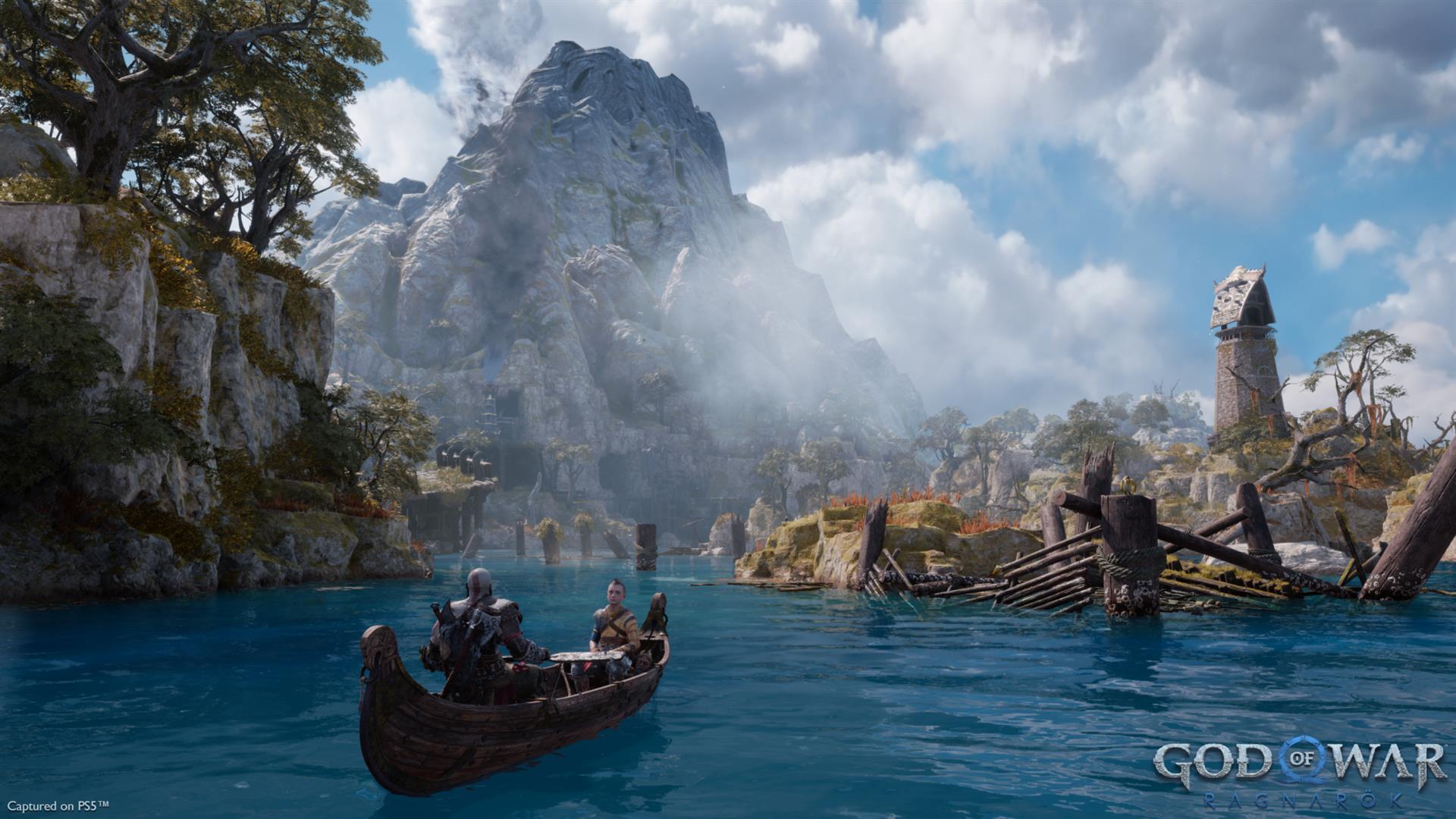 Okay, so now that the cat’s out of the bag about Atreus being playable, what’s new with Kratos? Well, he gets an electrifying new toy in his arsenal, the Draupnir Spear. Not only does this spear add another layer of depth to combat; it also ties in seamlessly with the events of Ragnarök. Kratos now has three extensively crafted weapons at his disposal, along with a reworked shield system. His rage meter can now be utilized for an empowered attack on one weapon as a heal. In the previous game, Kratos only has the Guardian Shield, gifted to him by his late wife Faye. Thanks to Sindri and Brok, Kratos can now equip different shields that each have a unique ability. Do you favor blocking or parrying more? Perhaps you enjoy bulldozing your way through enemies with a powerful shield bash. Now there’s a shield that specializes in each of those. All of these new tools have allowed more complexity and depth to the puzzles as well. You are frequently dropped into situations that require you to use both Kratos and Atreus’s abilities to light those Nornir Chest pillars or open a locked gate. 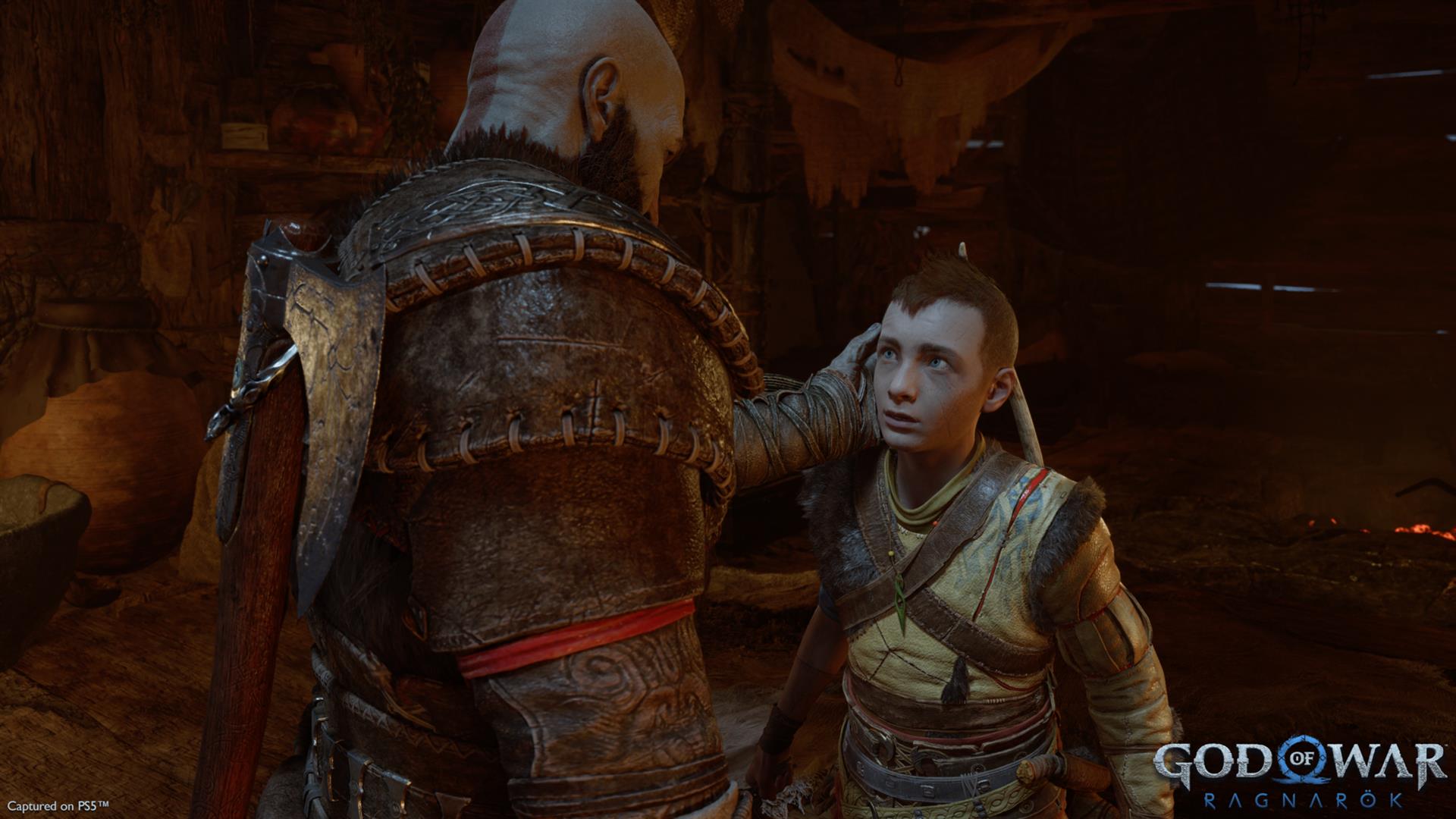 I can’t speak much about the narrative due to spoilers, but I can confidently say that the writing is exemplary. It’s rare to see characters, both main and side, be so multidimensional. Most depictions in this medium are usually one-note, but the writers at Sony Santa Monica Studio have truly gone above and beyond. There’s just so much color and life in these characters that I felt like it would be easy for me to befriend and strike up a conversation with them even though they exist in a fictional universe. I can wholeheartedly say that I thoroughly enjoyed meeting all the characters, and was surprised to be so invested in a few of them. God of War Ragnarök grapples with the concepts of relationships, violence, vengeance, and justice, told through incredible attention to detail in both the dialogue and environment. I felt whole spectrum of emotions throughout this entire experience, from anger and resentment to laughter and tears. And that’s not something I can say for many games.

There’s something special here with God of War Ragnarök. It’s more than just a video game – it’s an entire journey that transcends the modern day gaming experience with its masterful amalgamation of so many different working pieces. I’m looking forward to continuing to discover all the secrets that the nine realms hold while I ponder the themes of the narrative.

Sony Santa Monica Studio has created another masterful work of art, going above and beyond with world-class storytelling, in-depth combat mechanics, exquisite visuals, unparalleled performance, and a slew of modern accessibility features. God of War Ragnarök continues the endearing journey of father and son in a grand spectacular finale of the Norse Saga. This is the game of the generation.