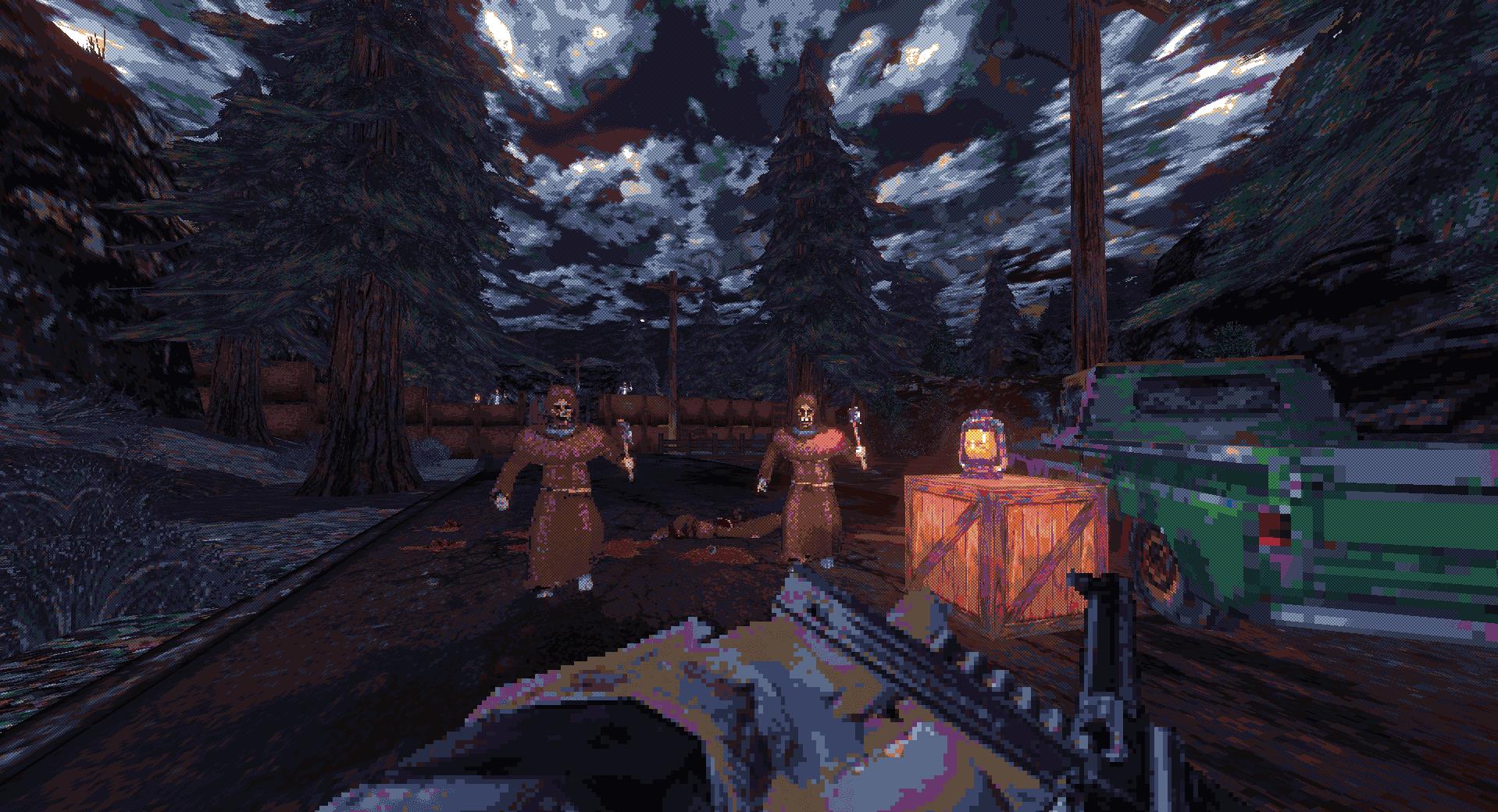 You wake up without having a memory of how you got there. You look around and realize you're in the bottom of a pit; next to you are piles of people who didn’t wake up. You recall the news headlines, the killings, the cult. You were the lead investigator, taken off the case under cloudy circumstances, and now they’ve tried to make an example of you. There’s not a lot of story to share before Cultic has you crawl up and out of a pit full of dead bodies, and that’s ok; I’m not here for a story. The slowness of the story lies in how it is told. Like most old-school shooters, you walk around and, if you’re lucky, stumble upon a notebook, or some writing on a wall that will describe what’s going on around you. If I didn’t take the time to look for and read the notebooks left around, I would have had no idea why I’m gunning down monster-looking people in robes who are shooting at me. But you can bypass all the story and just run and gun if you want.

I chose to review Cultic based solely on appearance. Jason Smith, Cultic’s sole developer, makes it a point that Cultic is an old-school style shooter with the advantage of a modern game engine. When I first sat down to play Cultic, it reminded me of sitting in my neighbor’s house on his dad’s computer, playing Wolfenstein 3D. When I look online at that game, I can see how different the two are in appearance, but the feeling stays the same. We would spend hours sitting on two of the most uncomfortable kitchen chairs, taking turns exploring. With Cultic, I decided to upgrade to a much fancier computer chair; but the feeling of exploration, the unknown lurking behind every wall is still there. With a more refined looked than a 90s first-person shooter, developers can get away with showing more but less at the same time. Cultic shows plenty. Walking into caves where bodies have been hung with their lower halves severed doesn’t look the same as in crystal clear top-of-the-line graphics. But that’s the point. 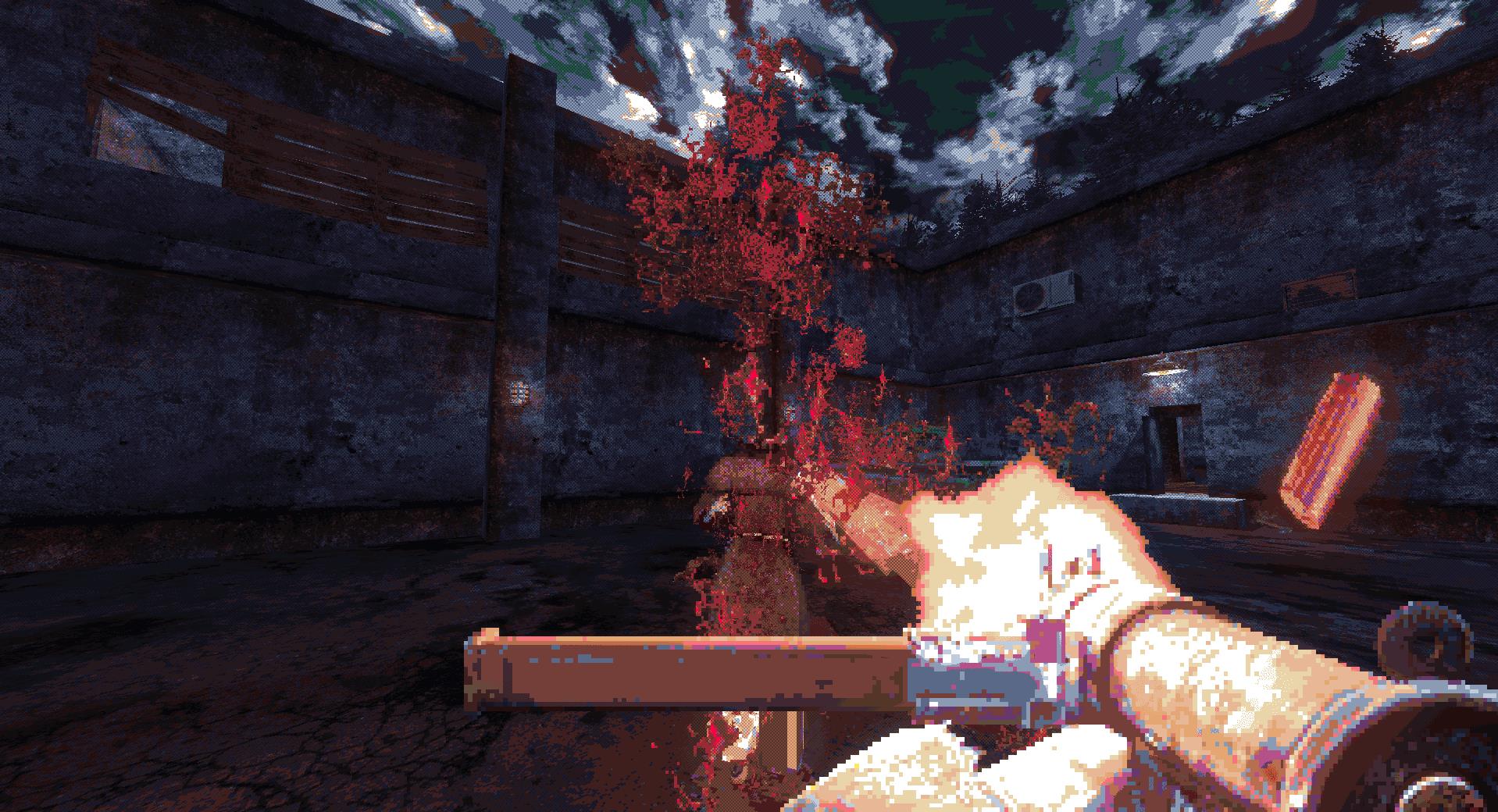 Cultic passes the vibe check without issue. I feel the old-school vibes it gives off, fully aware that Cultic could not have been made in the 90s. The graphical look is sampled from that era, but the details in the game are something different. One example of this is the explosions. Blowing anything up looks great. But it’s not just that Cultic feels like it's from decades past; the sounds and overall spookiness fit. Smith nails the overall atmosphere that he’s trying to give off. I frequently feel unsure of what is behind the next corner. Early in the first level, I find a note on a bedside table; once I finish reading it, the music strikes, and the dark tones startled me. Sometimes there’s nothing behind the door; other times, there’s this abomination with a chainsaw that begins to chase after me. 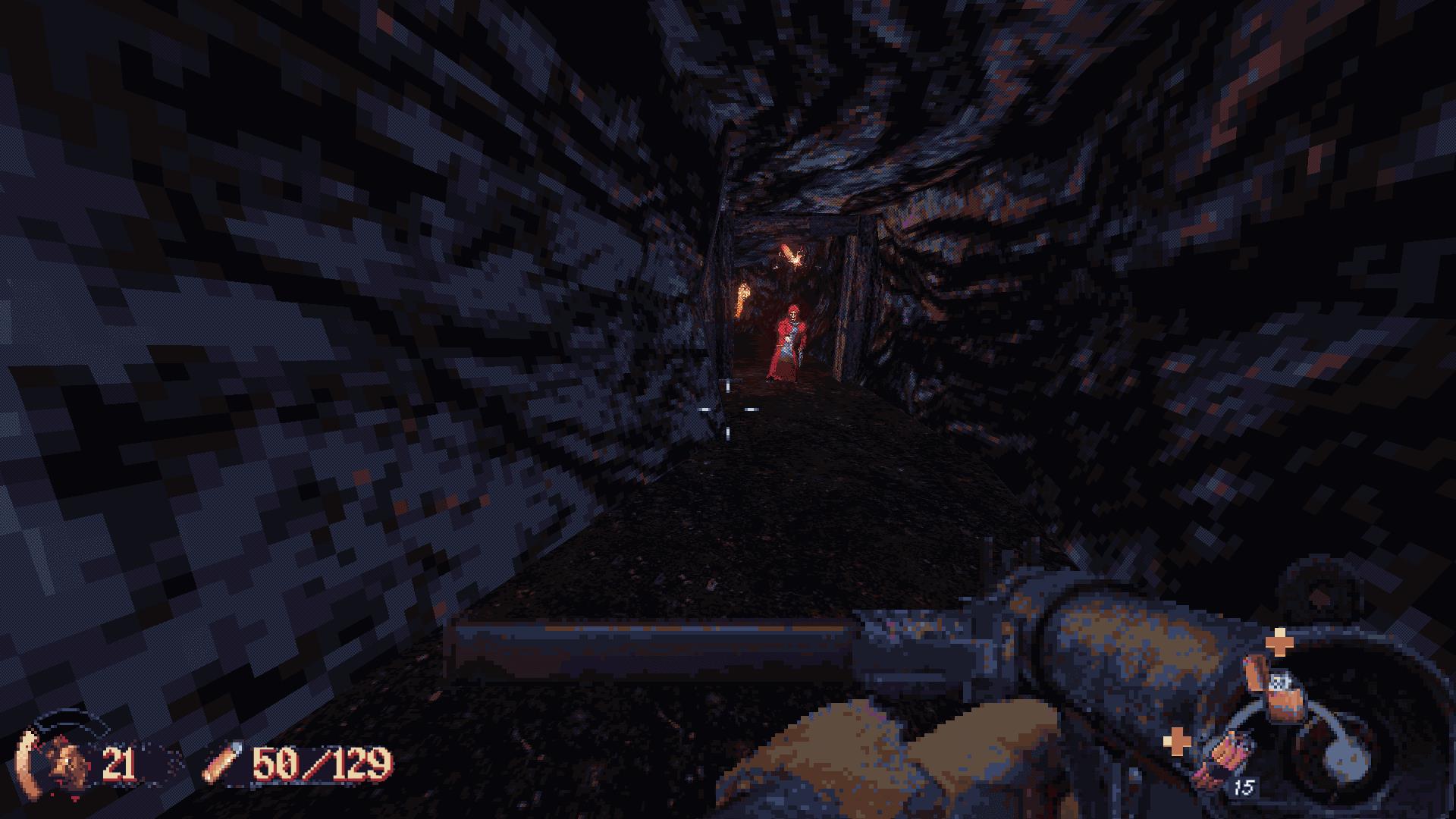 I enjoyed all the weapons provided to play with in Cultic, even if upgrading them seemed slow and monotonous. I wish finding upgrades would have been easier; I tried to find all the hidden rooms in each level, but I always came up short.

The sounds of Cultic also fit well. The tempo of the music kicks up when you trigger certain events. I quickly learned I was getting into trouble when the music picked up. While I love the cues from the music, I also enjoyed the sound effects. Not something that I usually pay attention to and notice, but throwing a Molotov cocktail and the sound it made as the cultists run around screaming on fire is great. I found myself throwing my cocktails and TNT as soon as I would pick them up because I loved the satisfying aesthetic. 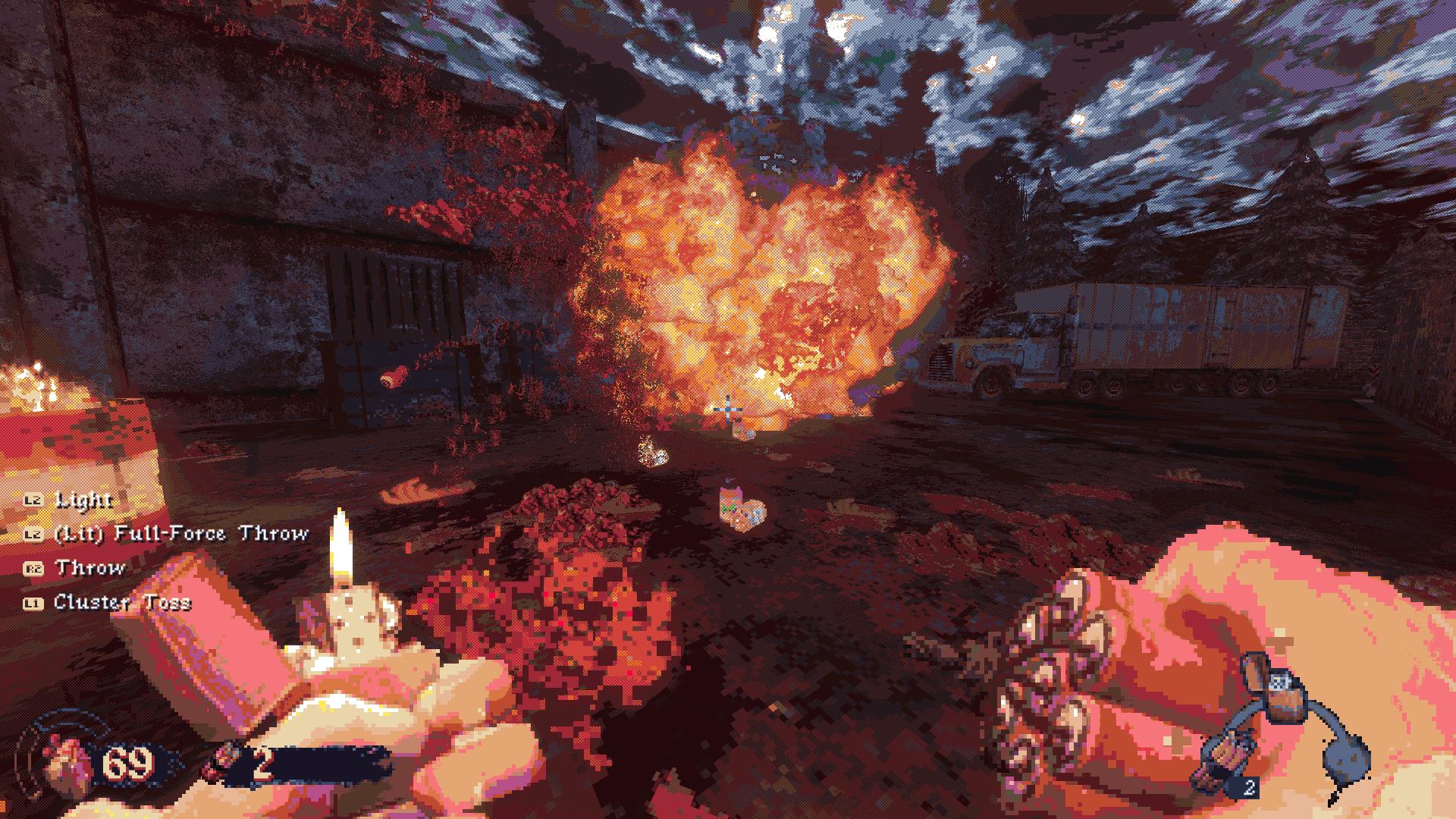 I have some gripes with Cultic, but none of them do much to sway me from enjoying it. I like the look of the enemies, most of them dressed up in various cult robes, waving axes or guns at me as I blast through them. They look stylish, but they have peanuts for brains. The only thing enemies do is rush toward my location and shoot at me. Some have more health than others, and that’s about it. The catacombs, crypts, and temples I visit look very similar. Levels like the shipyard were a great change scenery, but that level was early on. I easily lost my orientation as I navigated from location to location. I found myself frequently backtracking and not realizing I was doing so. Cultic is a bit dark and hard to see at times, even when I have my lighter in hand. Lastly, checkpoints can be an issue. When you die, you often have to redo half of that level, so save frequently. 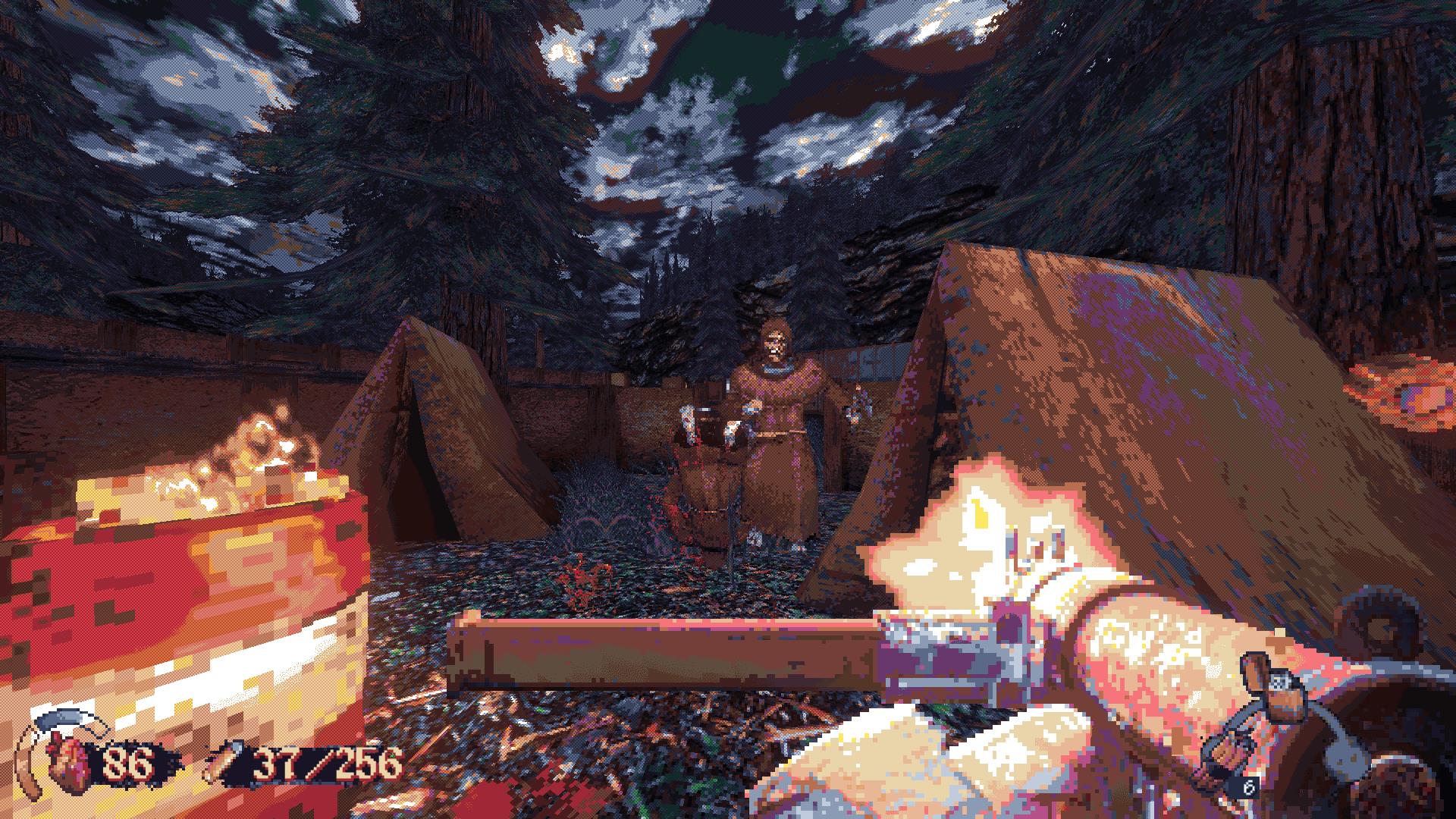 My short time with Cultic felt like a blast from the past. It only took around six hours to finish chapter 1. Any longer, I might have lost some nostalgic interest; the short game span helped keep me going. The graphic scenes play great in this pixelated homage to first-person shooters of the early nineties. Tight controls, plenty of weapons to choose from, and more hidden rooms than I could imagine drove me to enjoy this title more than I thought I would. The brainless enemies, at times hard-to-see rooms, and the occasional death that set me back ten to fifteen minutes didn’t hinder my enjoyment. Cultic is a game with great pixel gore, a soundtrack that inspires jump scares, and gives me that old-school feel I love. Cultic is a great weekend game that doesn’t require anything other than your time.

With Cultic, the nostalgia hits hard. So hard that it was easy to overlook some of the lighter features of the game. Enemies are mindless cult fanatics, sometimes with a gun, other times with an ax, and on occasion dressed in more than just robes. But that doesn’t matter. What matters is that Cultic made me feel like I was sitting on a kitchen chair in my friend’s house, taking turns trying to clear levels like I was ten years old. When I find something that gives me that goosebump feeling of nostalgia, I eat it up. Cultic made it feel like Thanksgiving; I can’t wait to see what the solo developer, Jason Smith, cooks up for chapter two.