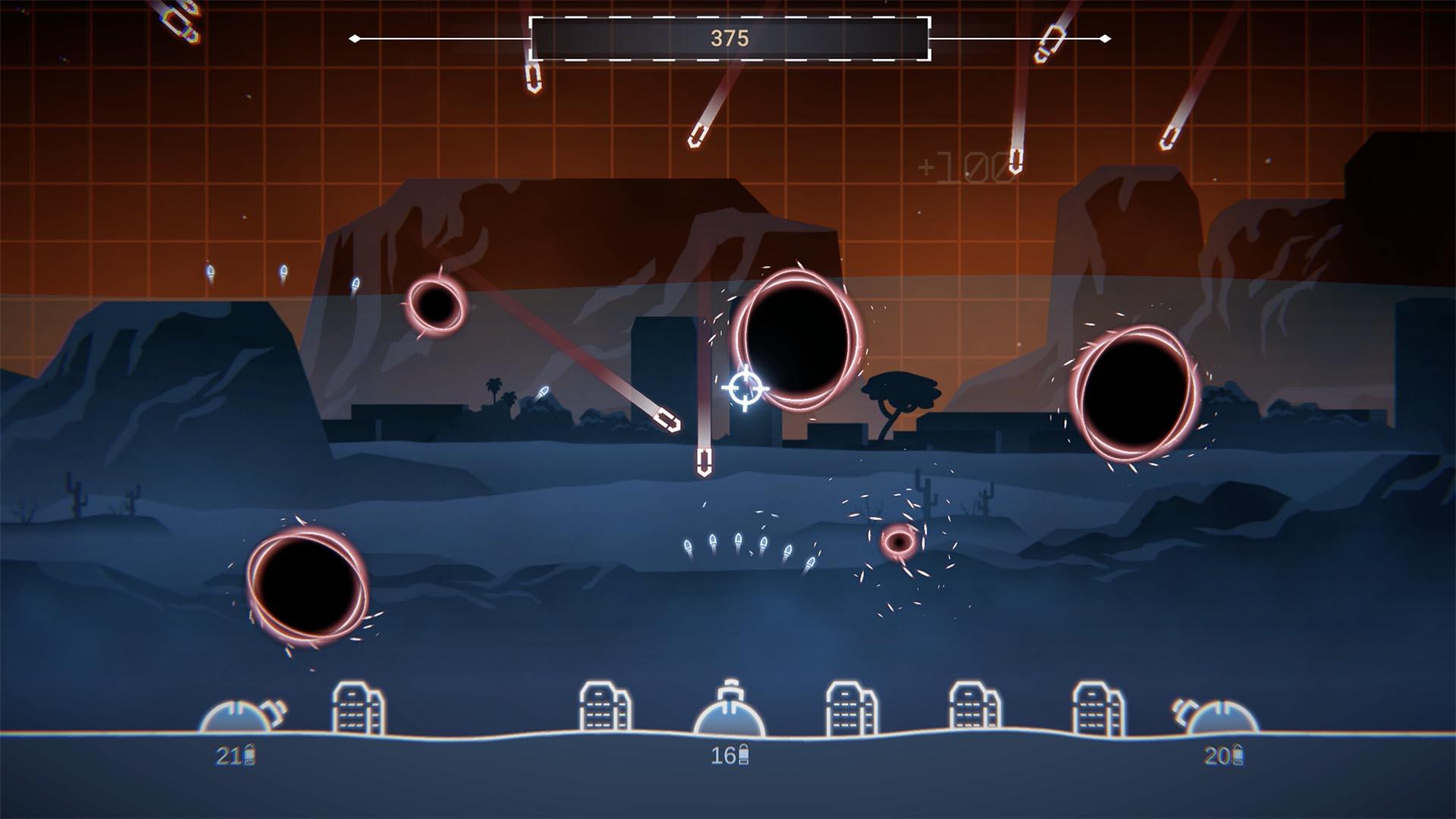 Written by Joseph Moorer on 11/10/2022 for PS5
More On: Missile Command Recharged

I didn't get into Atari's Recharged series until I acquired a copy of Asteroids: Recharged. The game was full of a neon aesthetic, and synth-esq sounds. It sort of seemed like these games weren't so much "recharged", rather than receiving a new-school skin thrown on a version of an already challenging game. Sure, there were new powerups, but you were still going to get waxed. In fact, Atari games took pride in letting you ease into the game, but eventually smacking you around by the 4th or 5th level.

From Tempest, to Breakout, to even Black Widow, these games were meant to show you how to play them, only to turn around and tell you that none of that mattered. Gravitar went one step further, saying to hell with any of that, and decided it was to demolish you from the very beginning. Now Atari has gone back with Adamvision Studios and SneakyBox, and re-released the first of the Recharged series, Missile Command: Recharged, with a new coat of paint. 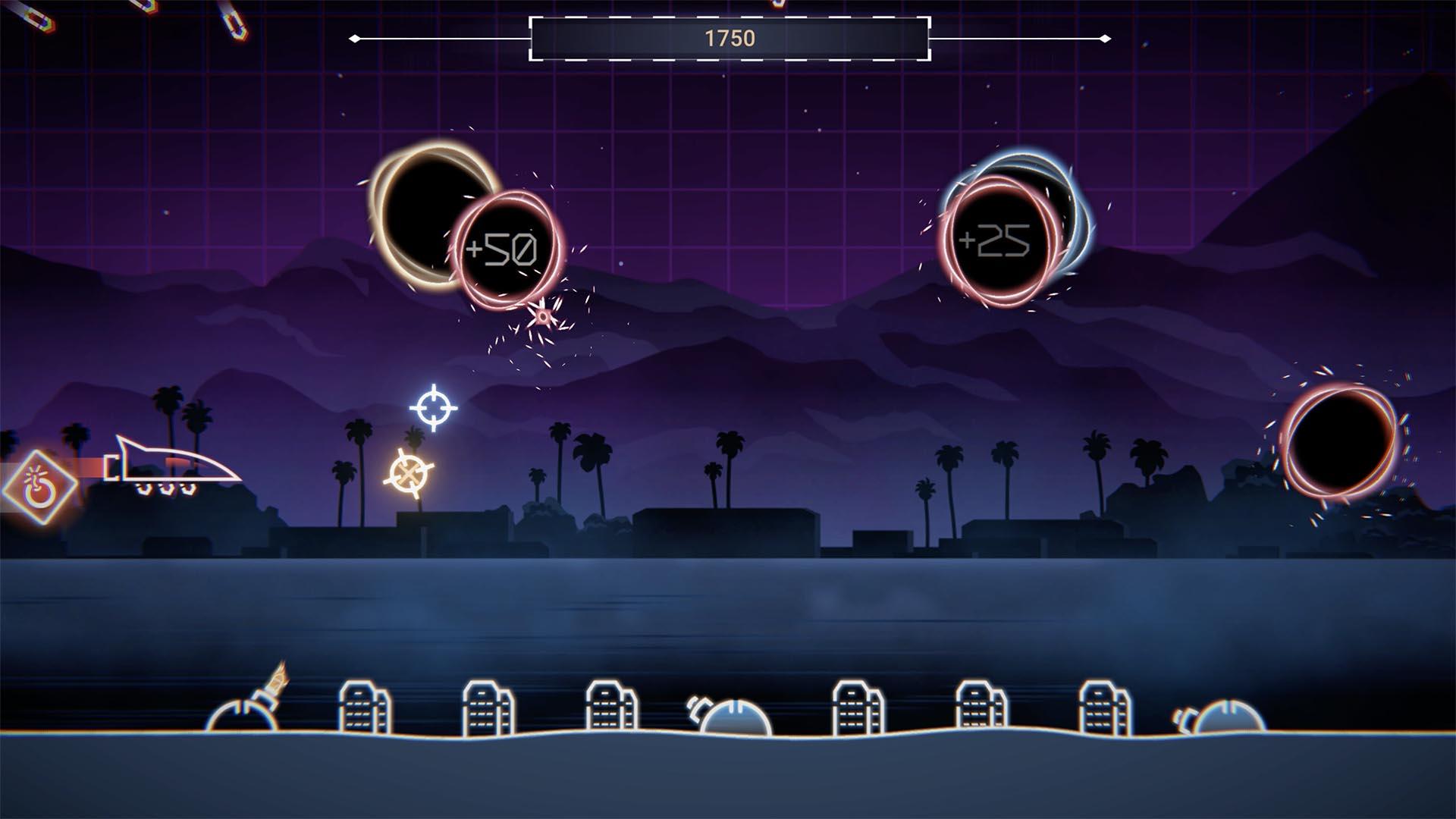 Now let's talk about that for a little. The original was released in 2020, as part of the Missile Command 40th anniversary celebration. Again the neon red, blue and pink were in full force, with a grid as a background. The turrets and cities were rectangular boxes, and the missiles resembled bullets. There weren't many options, other than language change and the sound volume. There were no challenges, and the sound effects were very reminiscent of the original game. The only mode available was "endless". The powerups are there too. The music, by Megan McDuffie, was your beat-banging synth background, but there wasn't much more too it. It looked nostalgic. It looked like something you could sink a few hours into. It kind of reminded me of Geometry Wars. Ask our Editor-in-Chief about that one. [Murderously addictive - E.I.C.]

This newly released Missile Command: Recharged (2.0) has received the full refresh brought to Yars and Gravitar: Recharged. You get a full menu screen, and options like to remove the screen shake, and you can take a gander at the credits. Not a lot of change there, but you can definitely tell the difference out the gate. The graphics have added a city skyline, or even palm trees, to the background in addition to the grid. The cities you're defending have a little more detail to them, as well as the turrets. And now the missiles differentiate in appearance depending on what they will do. Your regular run of the mill missiles just come down, sometimes straight, sometimes at an angle, where some are smaller, and seem like they're city seeking. And Megan seems to be hitting us with some new beats for the background music. They're filled with bass-thumping action-packed sound loops. The explosions have a little less oomph to them, but they're the least you are going to worry about here. 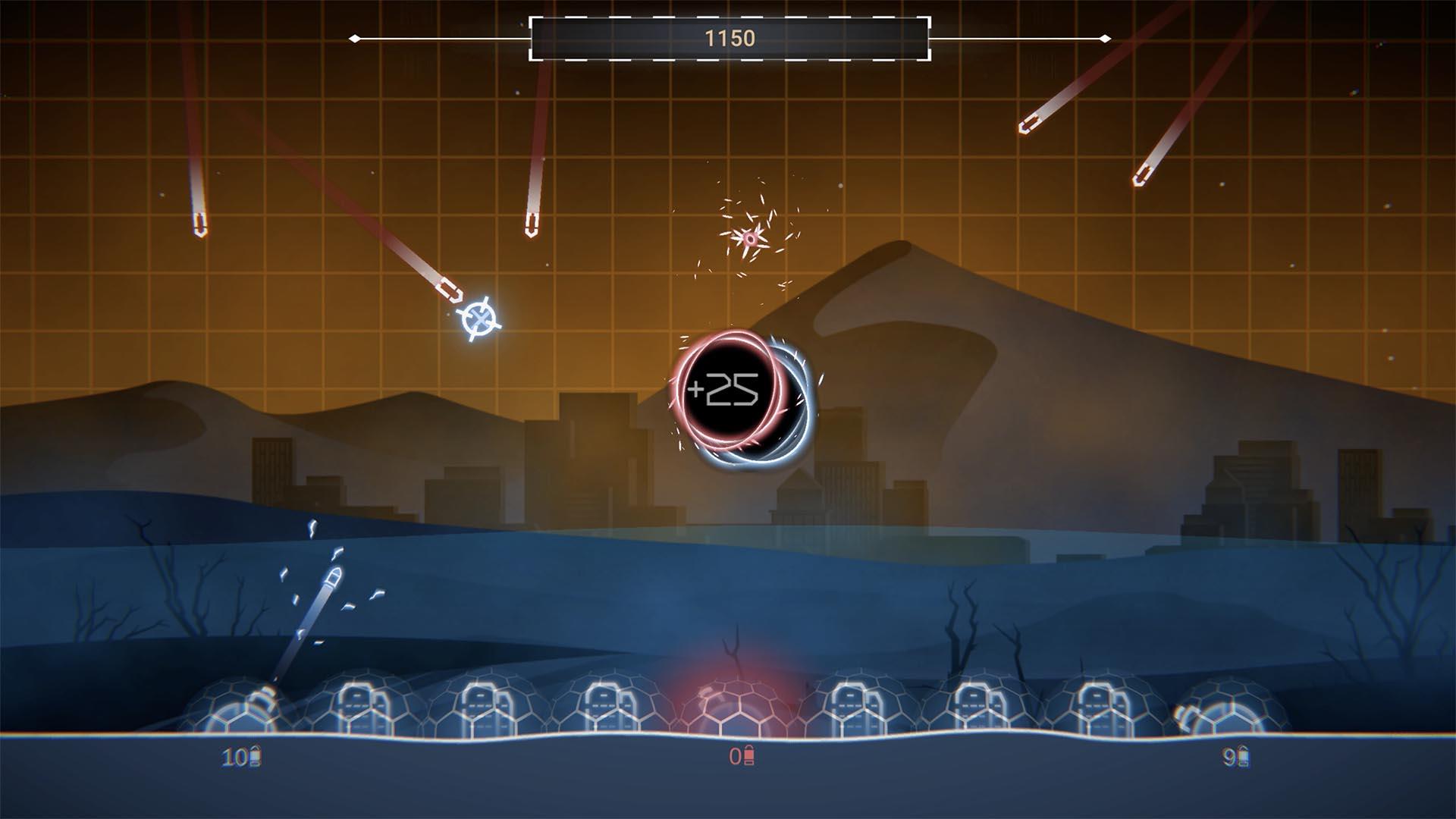 For those of you unfamiliar with Missile Command, your mission is simple. Defend your cities and turrets from the incoming and very present danger that is a full-on missile assault. As explained before, the missiles have different patterns, power, and mechanics that will throw you off if you're not careful. You have six cities, and three turrets. Those three turrets are are on the right, left, and center of the bottom of the screen. You shoot counter missiles to the incoming threat. When your missiles make contact with the enemy, they result in a circular explosion. That explosion also destroys any other missile in that path. The main idea is to destroy all incoming threats. I say threats, because there are other enemies, and variations of the missiles. Some are bigger but slower, with larger explosions. There are also random aircraft and UFO's that shoot down a barrage of missiles, or even have a homing laser. Tanks will even show up on the either side of your silos. Keep your head on a swivel, and shoot your missiles in front of their trajectory. The explosions will destroy anything upon contact. I will point out that, while your explosions don't destroy your cities or silos, theirs will. So if you shoot down a missile too close to yours, you can kiss whatever that is goodbye.

There are two modes in this game. The arcade mode is your standard endless mode. It lets you shoot as many missiles as you like to defend yourself. Again, the goal is to defend the cities, not necessarily the silos. Once all six cities are gone, your run is over, and you start from the beginning. At the end of your run, you can upgrade your silos with the points you accrue. You can upgrade in four ways. Power, which is the power of the explosion. Rebuild, which is how fast your silos rebuild (maxed out is two seconds after they're destroyed). Then there's reload. Your silos will shoot as long as they have the energy to shoot. If you shoot from the left, your next shot will be from the center, and so on. The reload makes this sequence a lot faster. Lastly, there's speed, and this is the speed of the counter missiles from your silos. Once you max these out, you'd think you're unstoppable, but this is an Atari game. Ain't no such thing.

You can also add modifiers here. A no rebuilding modifier nets you 2.5% to your final score, and the hyper modifier as well. The calm modifier slows the stress of the game down, but take 50% of your final score. You can combine the first two modifiers, but you cannot combine it with the last. Also, I would like to point out, that ANY bit of the enemies explosion touching your city is game over. Any part. 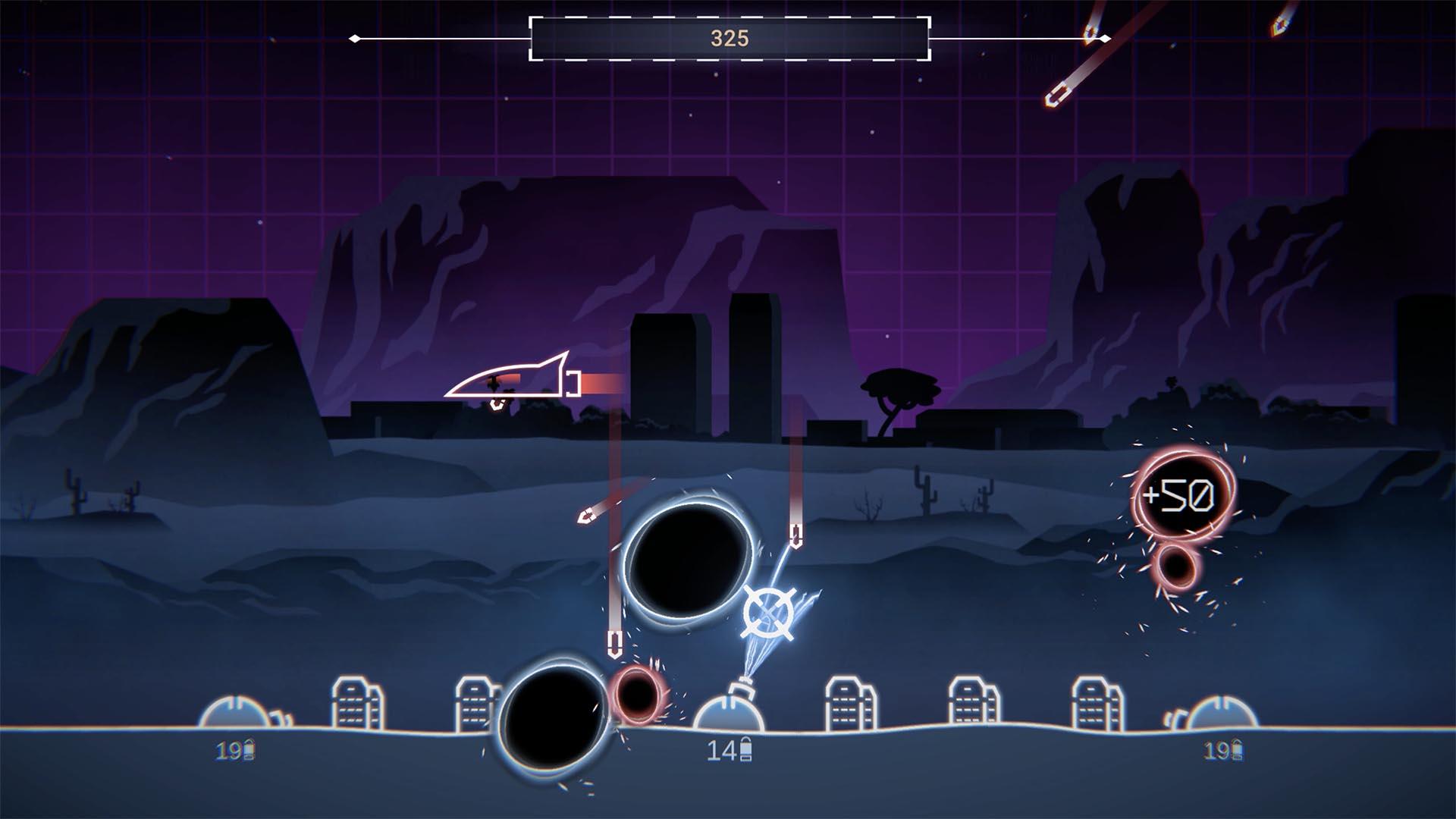 The Recharged series has also been known for the missions. There are 32 of these, and the first few familiarize the player with the powerups you find in arcade mode. One power up is a spread weapon, while others make your explosions bigger. One power up is just a large half-screen bomb that takes out everything. The challenges take your score from everyone, and combines it to rank you on the leader board. At the time of writing, I am ninth. This is a good way to break up the monotony of Arcade mode once you have everything maxed out. The upgrades do not carry over to the missions mode, and in each level you have a limited number in your counter offensive, so if you run out of missiles, but your cities survive, you win. Challenges are unlocked progressively, so don't think you can just go right to the end. Your final score on each level is based on a number of factors, like remaining cities, and silos. 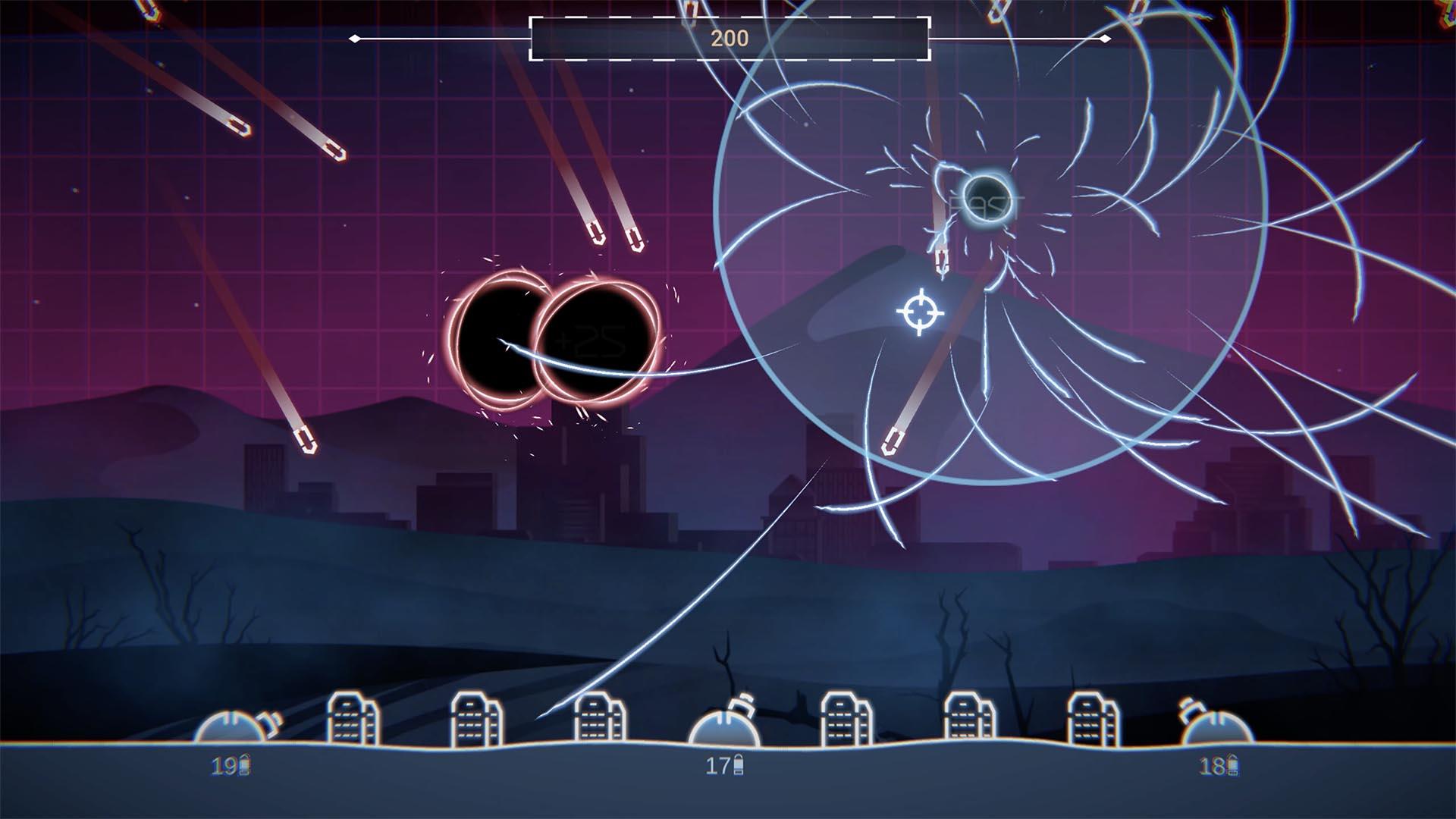 More options include a color blind mode, and even increasing the sensitivity of the analog stick. I believe you can use the touch screen on the Switch, and I just figured out that you can use the touch pad on the PS5 controller to navigate and shoot. In Arcade mode, I found it okay to make a sweeping motion from right to left, until the enemy ships come in. And watch out for anything that can hone in on you. Shoot those things down first. I've probably said this in every Recharged review, but let your kids play this for at least a good hour of fun. It'll be worth it. If you have the old one, you get a discount on the new one, so bear that in mind.

Missile Command: Recharged is the upgrade you didn't think you needed. It's new missions and graphical polish is a very nice touch. I'd dare say this is one of the first tower defense/bullet hell games, and Atari never skimps on delivering the "hell" part of that equation. With snappy controls, and a cool soundtrack, Missile Command: Recharged will keep you on your toes, for as long as it wants to.