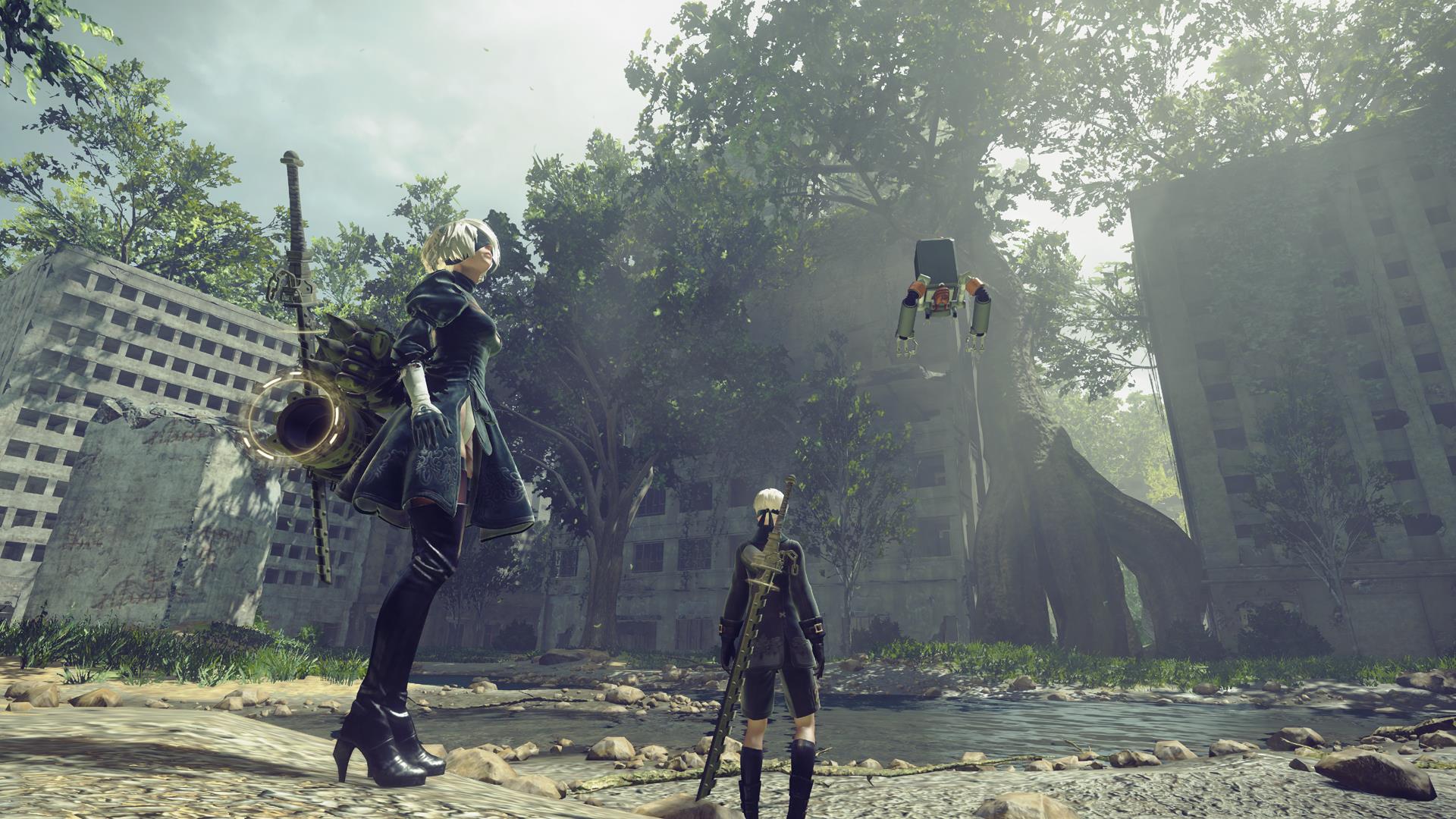 There is no doubt that the hardware of the Nintendo Switch is getting increasingly outdated and surpassed by the Xbox Series and PlayStation 5. However, it’s still quite common to see many games being ported over to the Switch for its unparalleled portability, either natively or through cloud streaming (yuck!). Oftentimes the visual fidelity and technical performance of games take a huge hit on the Switch due to the hardware constraints, and end up being an overall downgrade. This isn’t the case with Yoko Taro and PlatinumGames’ action role playing game NieR: Automata from 2017, which has finally made its way over to the Nintendo platform in the form of NieR: Automata - The End of YoRHa Edition. Thank goodness that it’s a native port, considering the base game had inconsistent performance on other consoles at launch that left fans anxious and worried. The End of YoRHa Edition is a surprisingly splendid Switch port, allowing for a smooth and enjoyable experience, considering the noticeable cut in image quality and lowered frame rates. 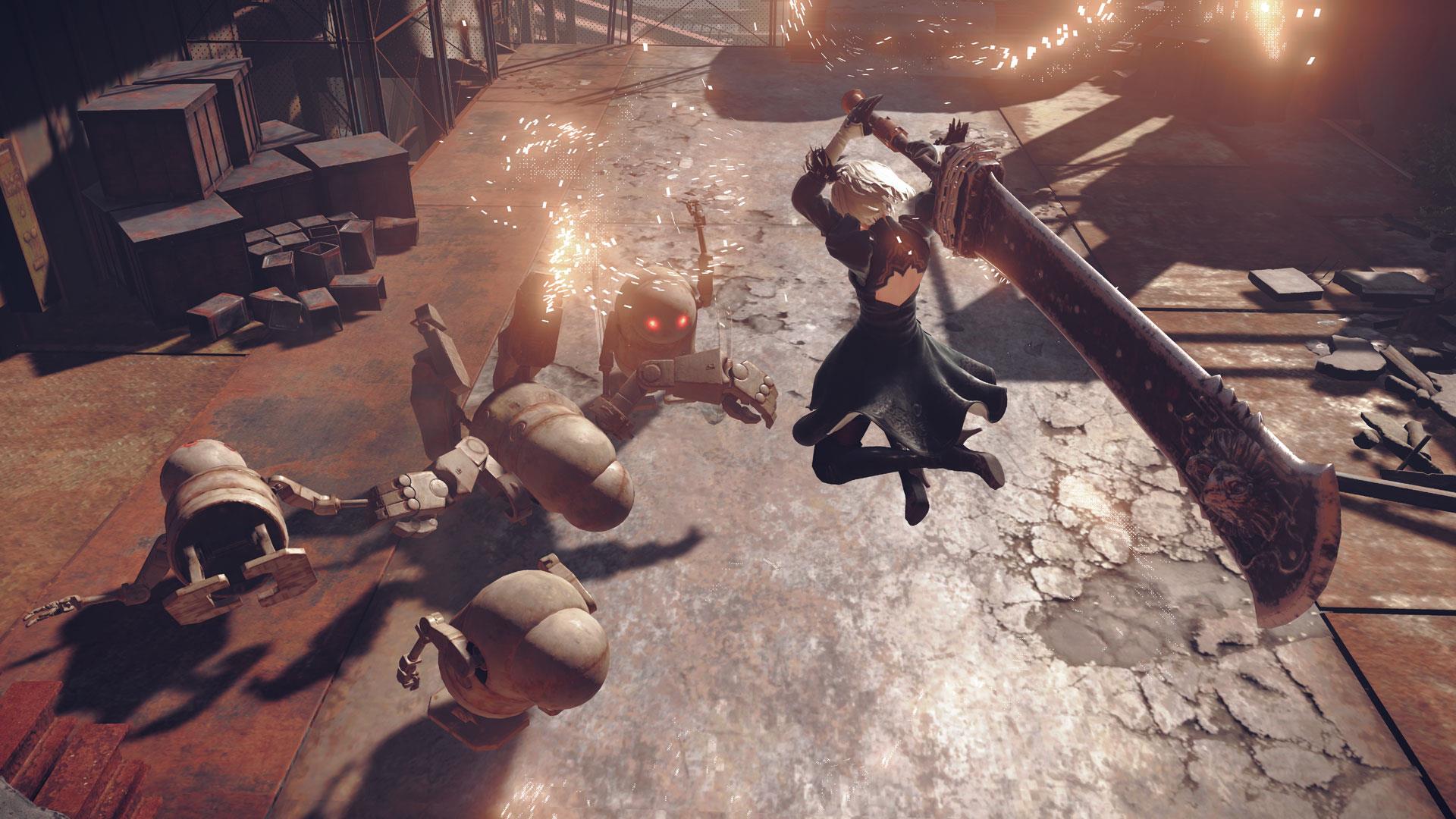 This unexpected Switch port contains the base game, the “3C3C1D119440927″ downloadable content which includes three battle arenas, three costumes, and a story side quest, as well as Nintendo Switch-exclusive costumes for the main characters. It’s quite a lot of stuff given this version is priced fairly at $39.99, although it would have been nice to get some actual new content instead of cosmetics. NieR: Automata is the sequel to 2010’s NieR, which itself is a spinoff of the Drakengard series, and takes place in a world where Earth has been taken over by machines and humans have retreated to a base on the moon. Though Automata takes place in the same universe as NieR, it’s not required to play the original to enjoy this game, although it helps in piecing together the overall lore. You play as Androids 2B and 9S, who are members of an organization known as YorHa, sent to Earth on a mission to battle the machines and uncover the aspects of human replication.

If you’ve never played a Yoko Taro game before, then you should know how difficult it is to discuss narrative details without venturing into spoiler territory. What I can tell you is that the story is an integral part of the experience he has created, and one that is thought provoking, emotional, and full of twists. It’s best to go into the game as blind as possible so that you can appreciate it at its fullest. 2B starts off being extremely cold and emotionless whereas 9S is much bubblier and more talkative. These two Androids make an unlikely duo in a dreary post-apocalyptic world, with an interpersonal dynamic that will have you invested in them until the end. Remember that the main characters are also machines, and have developed great levels of sentience, to the point where they question and think about what it means to be human. Taro takes an interesting approach at exploring various aspects of humanity, including love and hope, through the lens of non-humans. Many of Taro’s games, this one included, require several playthroughs to achieve the true ending. This might come off as tedious and repetitive for some, but it serves as an extra treat for those looking to find closure with the narrative. The production value of NieR: Automata is further enhanced by both the incredible voice cast as well as the melancholic soundtrack. 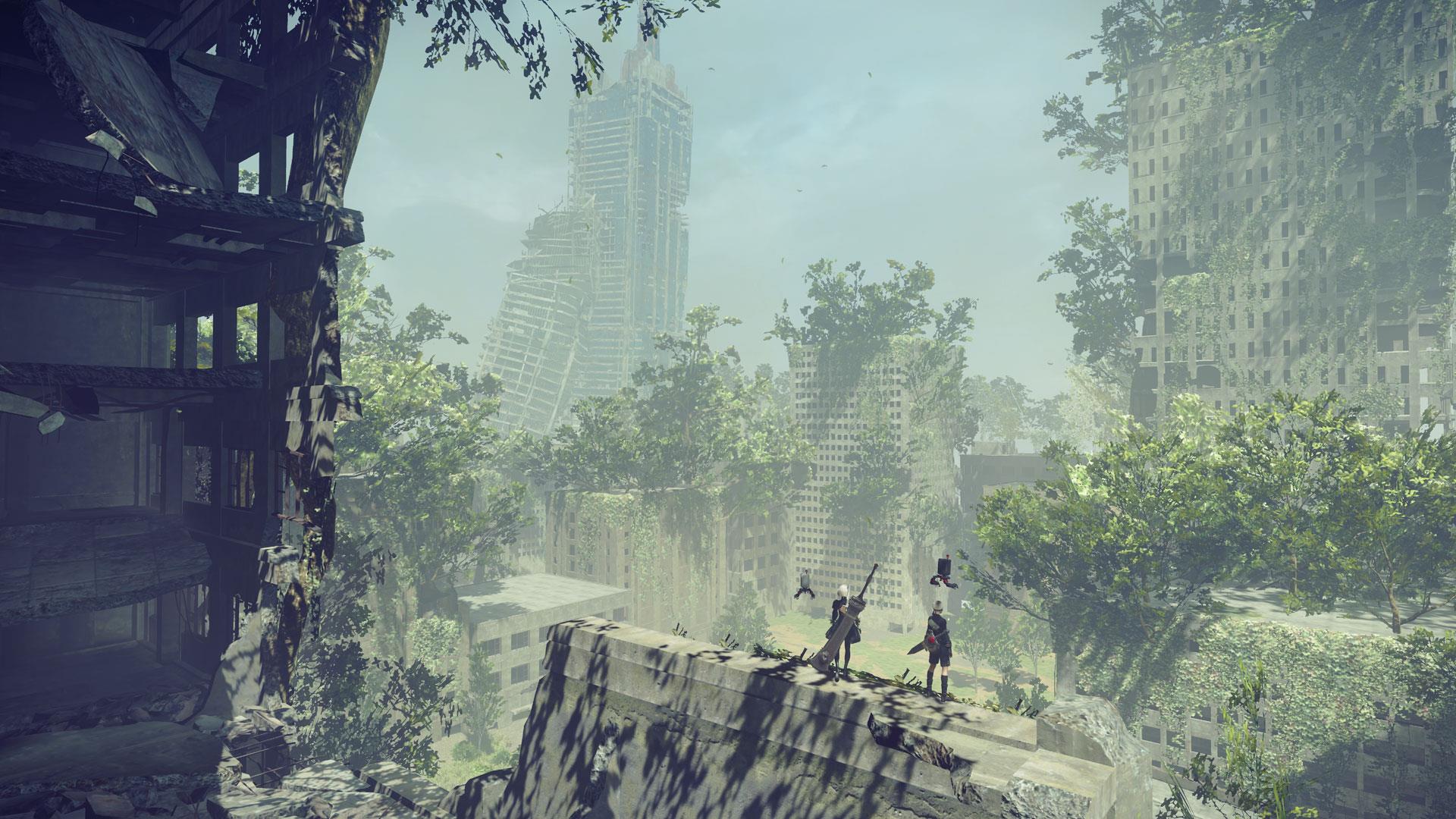 Automata smoothly blends various action gameplay mechanics into one cohesive experience that never feels tacked on, along with some amazing set pieces to keep you engaged and on the edge of your seat. You start off in the familiar third person perspective, with your basic light and heavy attacks, a jump, and a dash. A cute little support pod hovers beside you and acts as a supportive turret. 9S also assists you in combat with settings that you can toggle to change how he behaves, aggressively or defensively. These are all pretty standard hack and slash mechanics, but Automata shakes things up by frequently shifting the camera angle. These shifts can go as to changing gameplay into a top down twin stick shooter, a side scrolling platformer, or a hacking mini game. The massive kaiju level bosses that you encounter that often change up the battlefield keep combat feeling fresh.

There’s not a lot of depth to each combat scenario per se, and the game definitely favors variety over complexity. You can purchase different weapons and upgrades but overall movesets and skills are limited. There is a chip system, which allows you to customize your characters with various buffs and abilities such as auto-heal, but it doesn’t get more complex than that. Shoot’em up sections are just shooting, dodging, and activating a special skill that goes on cooldown. But these changes do keep gameplay refreshing, and the varying camera angles force you to tackle encounters with a different mindset. The added cherry on top are the difficulty options of which the easiest allows for auto-dodging and for your support pod to auto target enemies. It’s always nice seeing developers providing accessibility features for more people to enjoy their games. 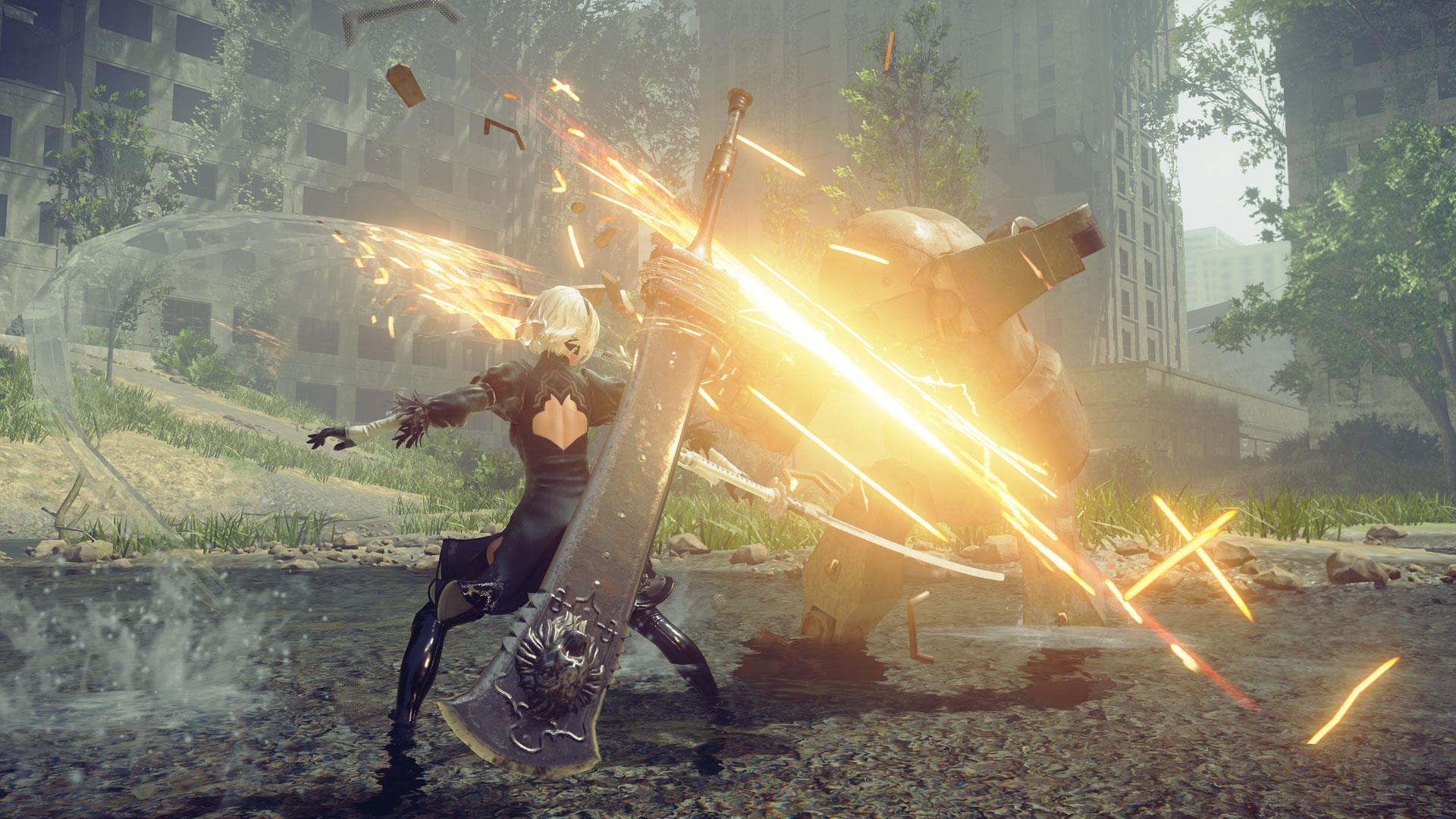 As previously mentioned, the Switch port of NieR: Automata does understandably take both a visual and performance downgrade from its PC and other console versions. The image quality is noticeably blurred on the Nintendo Switch, with graphical assets rendered at a lower resolution, textures being less detailed. Nonetheless, this is still a beautiful looking game on the Nintendo Switch. It should be noted that the visual fidelity is a bit worse when playing on handheld mode, and camera angles are inconsistent on the Switch’s display. Resolution docked is 1080p whereas handheld is 720p. That’s the price of portability, I guess. Gameplay is also locked at 30 frames per second, compared to a solid 60 on other platforms, which is a huge letdown considering how action-heavy the game is. Combat, as a result, sometimes feels sluggish and unresponsive with the controls. Certain animations also seem to lag and execute more slowly at times. What is new and positive about the Switch port are the motion controls that come built in with the Joy-Cons. Most people probably won’t use them, but it’s still pretty neat to get a little workout in as you swing the controller to dodge or slash.

If you’ve never played NieR: Automata before and own a Nintendo Switch, then The End of YoRHa Edition is undoubtedly the definitive way to experience this masterclass game. You get to enjoy an all-in-one package with some extra exclusive Switch goodies wherever you are, on the go or at home. For those that have already played before, there is unfortunately little reason for you to come back unless portability is a huge factor for you. PlatinumGames has developed an outstanding port given the hardware constraints on a title that so many hold dear to their hearts. It’s amazing that this excellent narrative driven action role playing game can now be enjoyed on all modern day platforms.

I would have laughed in disbelief if you told me NieR: Automata was being ported to the Nintendo Switch in 2017, considering how disastrous this game’s launch was on the PlayStation 4. The team at Virtuos did an outstanding job with NieR: Automata - The End of YoRHa Edition, a native port of the original game on the Switch that is undeniably the definitive way to enjoy Yoko Taro’s masterpiece. Sure, the graphics and frame rates take a dip, but that’s the price of portability.