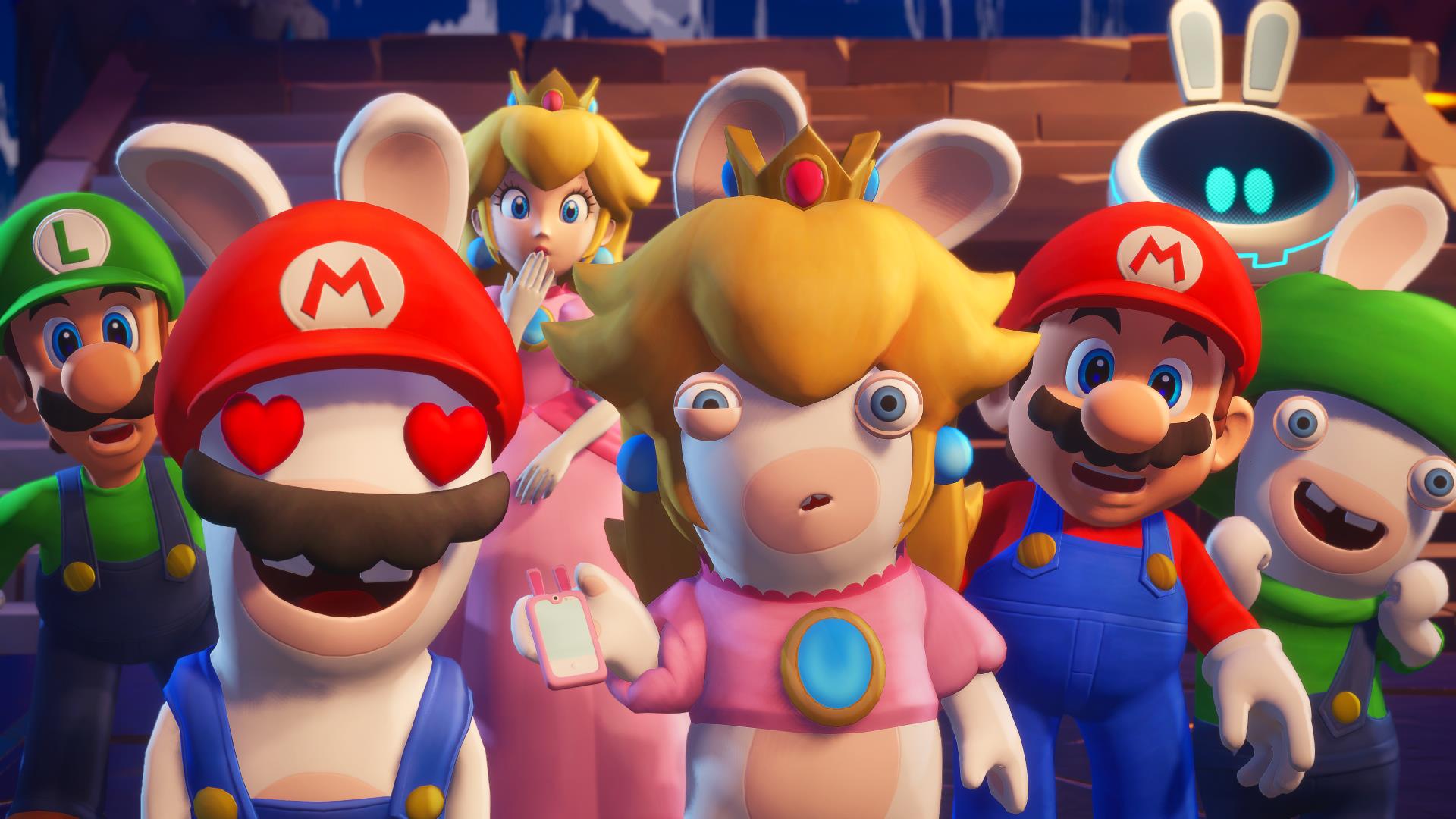 Written by Elliot Hilderbrand on 10/17/2022 for SWI
More On: Mario + Rabids Sparks of Hope

People were surprised in 2017 by how in-depth the original Mario + Rabbids title was, often comparing the release to more adult-oriented tactical games. The sequel Mario + Rabbids Sparks of Hope has some notable differences from its predecessor. Combat has a new look. Most of the sharp edges have been softened and streamlined. Gone are the cursor and lines to show where you can place them on your character; on your turn, you can place them anywhere within their moving distance. Go behind a block for cover, or don’t; Sparks of Hope doesn’t care. Sparks of Hope wants to make those choices harder and more meaningful, and it works. Some original characters are gone, like Yoshi; both regular Yoshi and Rabbid Yoshi are not here. They’ve been replaced by new characters, like Edge or Rabbid versions of classic Mario characters. 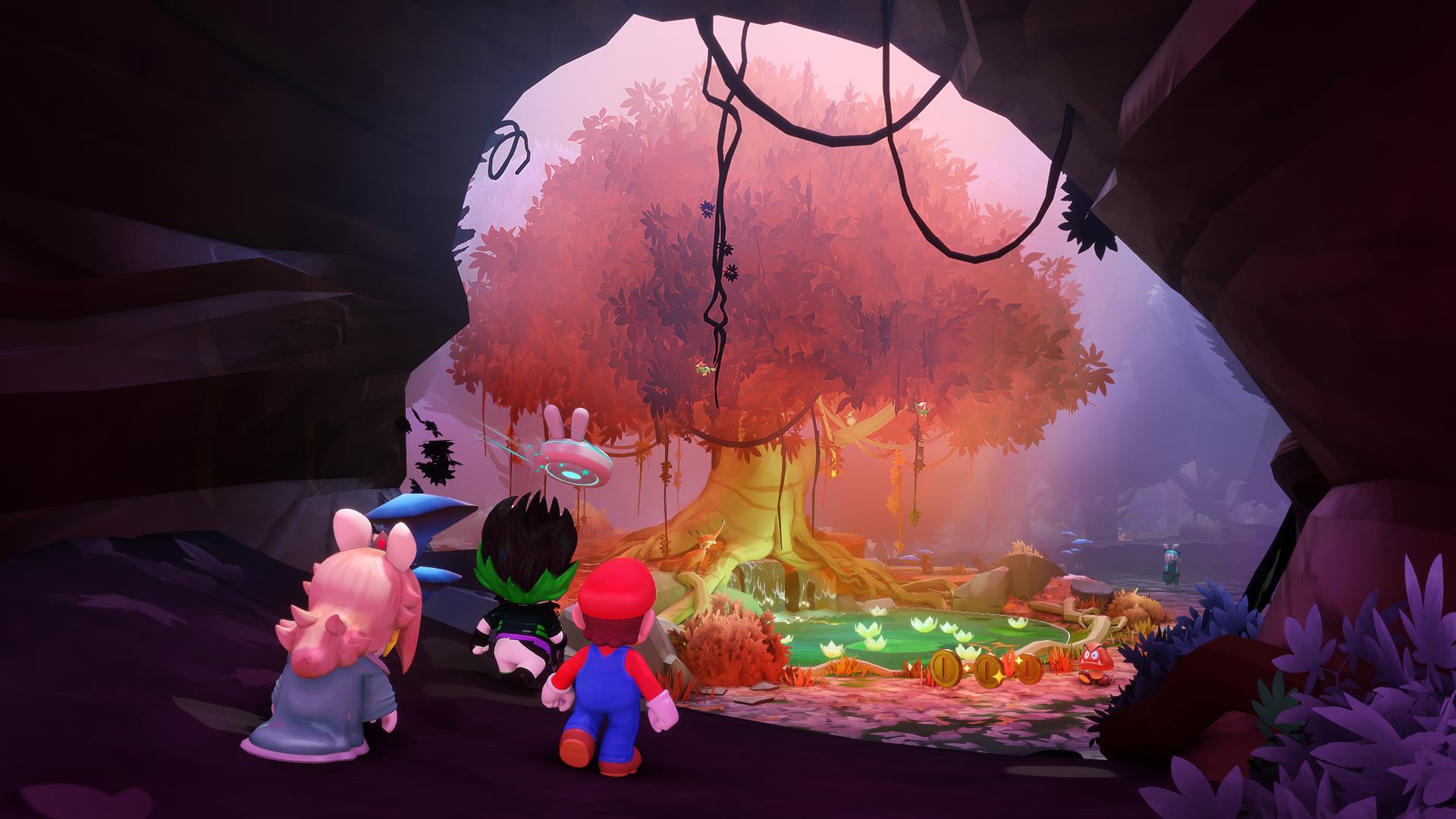 The feel of combat remains the same with Mario + Rabbids Sparks of Hope, even though it has been streamlined. Movement on your turn feels more fluid; even though the rules have not changed much, visually, the screen is more appealing to look at. When I chose to move a character instead of a line being drawn out to show where I’m heading, this time, the character moves. Switching between characters on my turn is also simple. I feel no pressure to make my move, being able to take my time and set up combos. Moving units to get the best results can take some thought.

The tactics-style gameplay appeals to adults, but this feels like it was made for the younger crowd regarding nearly everything else. On the humor side of Mario + Rabbids Sparks of Hope, there is nothing adult about it. Sparks of Hope lets its characters be wacky and over the top while still allowing Mario to look and feel like Mario. I don’t think I saw a single finger-pulling fart joke in the game, but that would fit the mood Sparks of Hope is setting. It’s not bad and the jokes are handled pretty well, but it helps that I’m a kid at heart; if I weren’t, I probably wouldn't have found the humor as fun as I did. Rabbid Peach continues to be my favorite character from the first entry. 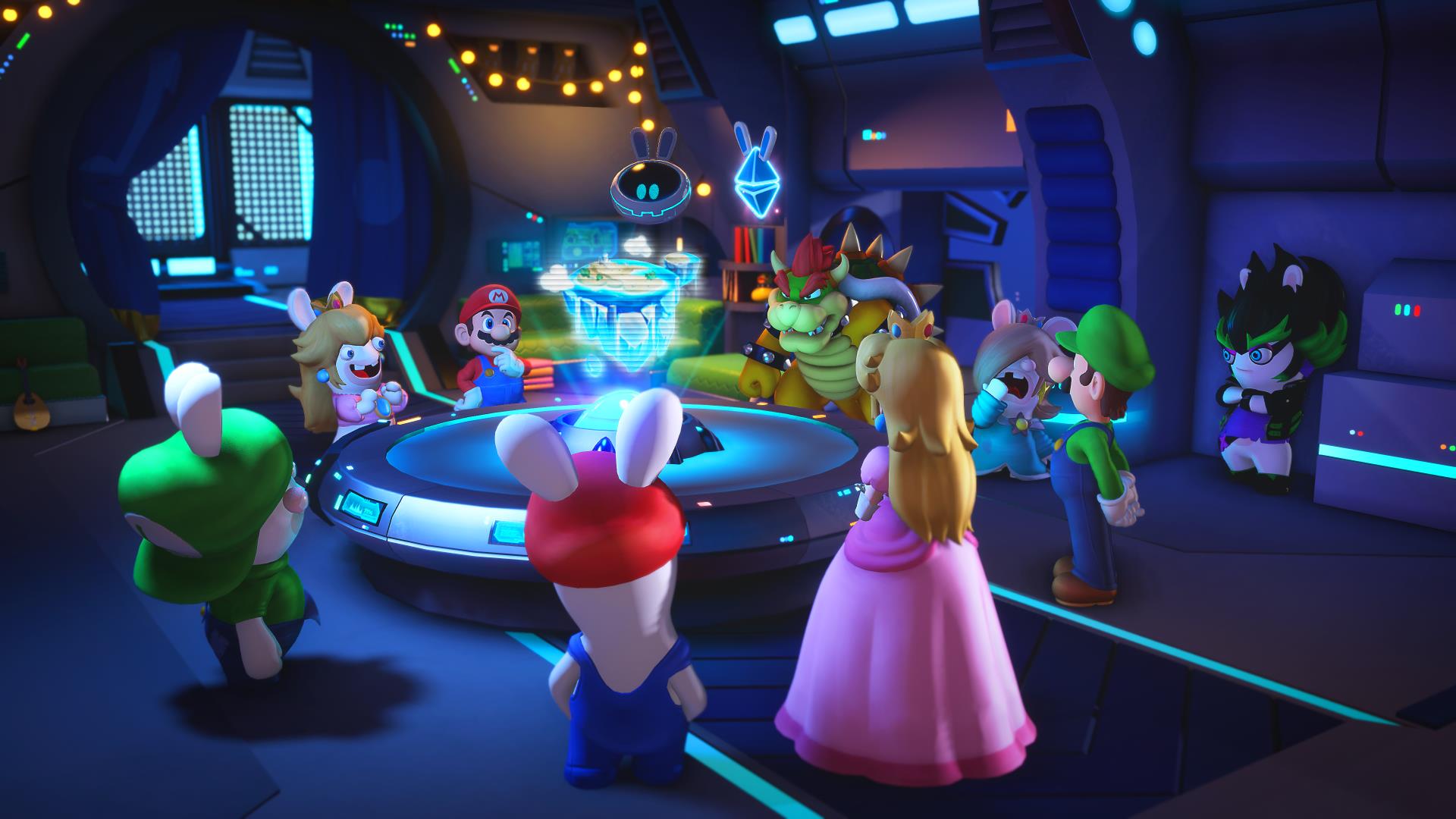 In my first few battles, combat came off as a little overwhelming. There seemed to be a lot of choices to make. Besides moving, I can use my weapon, my character’s special ability, or the Spark's special ability. Sparks of Hope tries to ease you into gameplay; I feel first-timers to the series might need a few fights under their belt before they feel comfortable.

A game centered on Mario - and Rabbids - typically means the younger crowd will be interested in a title like this. One of the best features to come with games that can be targeted toward a younger crowd is the difficulty settings. Mario + Rabbids Sparks of Hope has three different settings to choose from regarding combat. You can switch between any of the three before every fight. Perfect for someone who wants a challenge or wants to see all the content. I found myself leaving it alone; the normal mode was enough of a challenge. 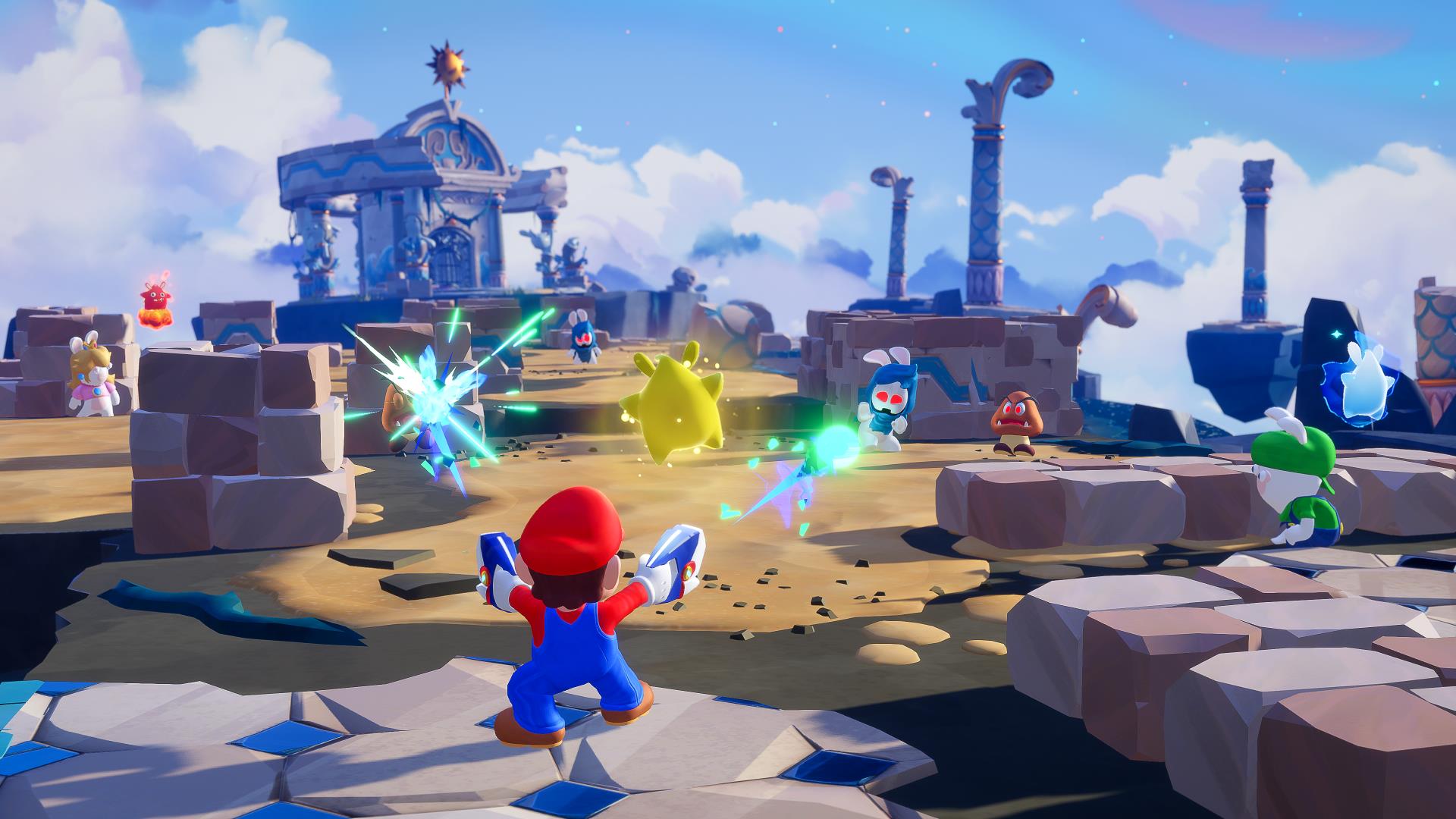 Sparks of Hope has five worlds for players to visit. Each one has a unique story to it. On one, you need to find the planet’s warden who's gone missing; on another, you need to bring sunlight back to the planet. Each one offers something a little different, but they play out similarly. There are Sparks throughout the world that need help in some fashion, usually from the Darkmess. Each world has a boss at the end you need to defeat to claim a Spark and move on to the next world. Boss fights were a highlight of the planet. A lot of times, they involved some new mechanic, and I often found myself needing a couple of attempts to clear the level on any difficulty other than relaxed.

At first the five worlds you have to explore do not feel huge. The main story of a planet doesn’t take long to finish, a few hours on each one. Finishing the story quests opens up the rest of the planet for exploration. I was surprised how quickly I would finish the story of the planet, but Sparks of Hope would tell me I only finished around 55% of that planet's content. Half of what Sparks of Hope has to offer lies in the side quests. They’re worth taking up, usually providing the best Sparks to add to your collection. I stuck to the main story missions until I neared the end of the game. Once I was down to what I assumed was the end, I went back to finish most of the side options. Revisiting the worlds I had previously cleared to finish all the side options nearly doubled my playtime. 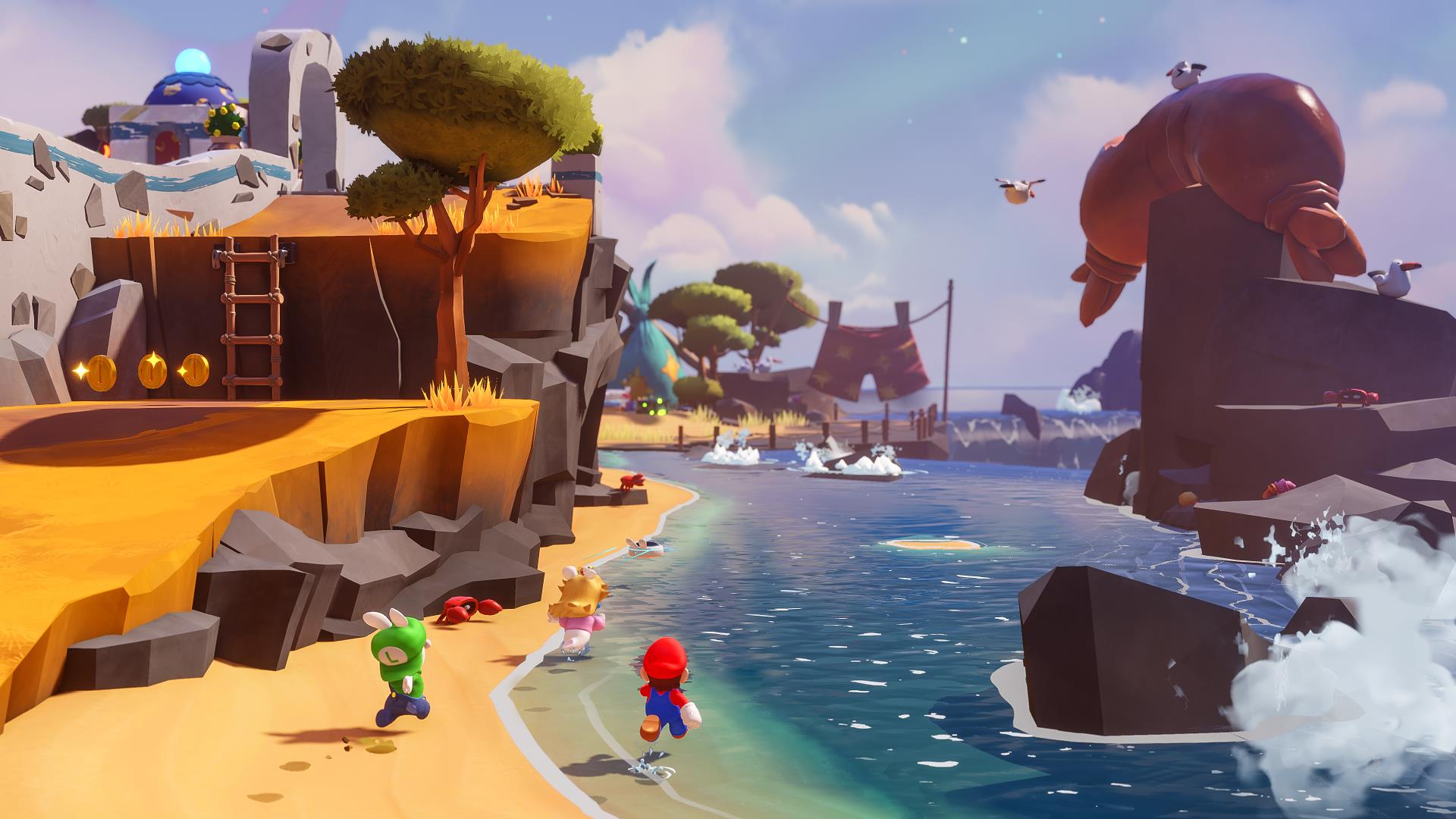 Sparks are one of the big new features of this Mario + Rabbids game. Half Rabbid, half Luma Sparks are all unique. They can come in various colors and powers. Each one is different. You can pair one Spark with each of your characters in battle, giving them bonus options in combat. Some will mitigate damage, enhance a certain type of damage, heal, or even buff a character or party. There are 30 different ones to collect, 16 through the man story, another nine through the side quest, and five in the planet vaults. Planet vaults are hidden in each world, typically requiring extra work for the players to collect, but they’re the best Sparks and worth the effort. 5 planet vaults, secrets hidden, require the most work, usually some of the best sparks. 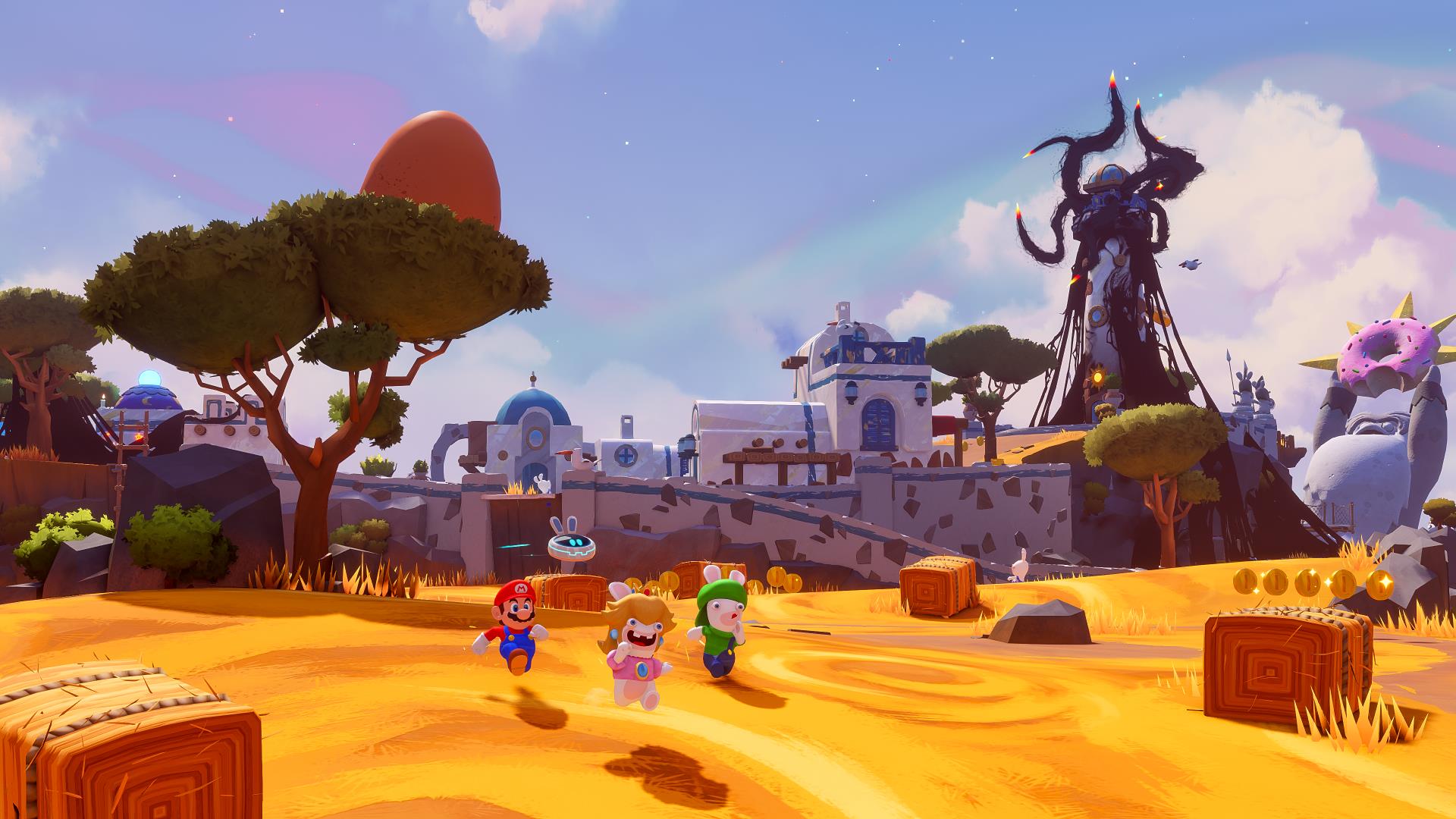 I enjoyed all nine characters to play around with; each one felt unique. For example, Mario utilizes two-range weapons and is the best all-around character while Rabbid Mario is a brawler, best at close range. It still feels and looks odd to see Mario and his companions using weapons, something I don't think I'll ever get accustomed to. Once I found a combination that worked for me, I stuck with it, usually rolling with Mario, Luigi, and Rabbid Peach. The new additions to the roster were nice, but I wish it weren’t at the expense of losing a few from the previous game.

The weakest part of Mario + Rabbids Sparks of Hope is the puzzles, which are simple, fast, and predictable. They feel like an afterthought to the rest of the game. Puzzles might have two or three steps to them, move this box, then that box, and then the first box one more time; typically taking less than a minute to complete. I could look past them because of the great combat, the real lifeblood of Sparks of Hope. 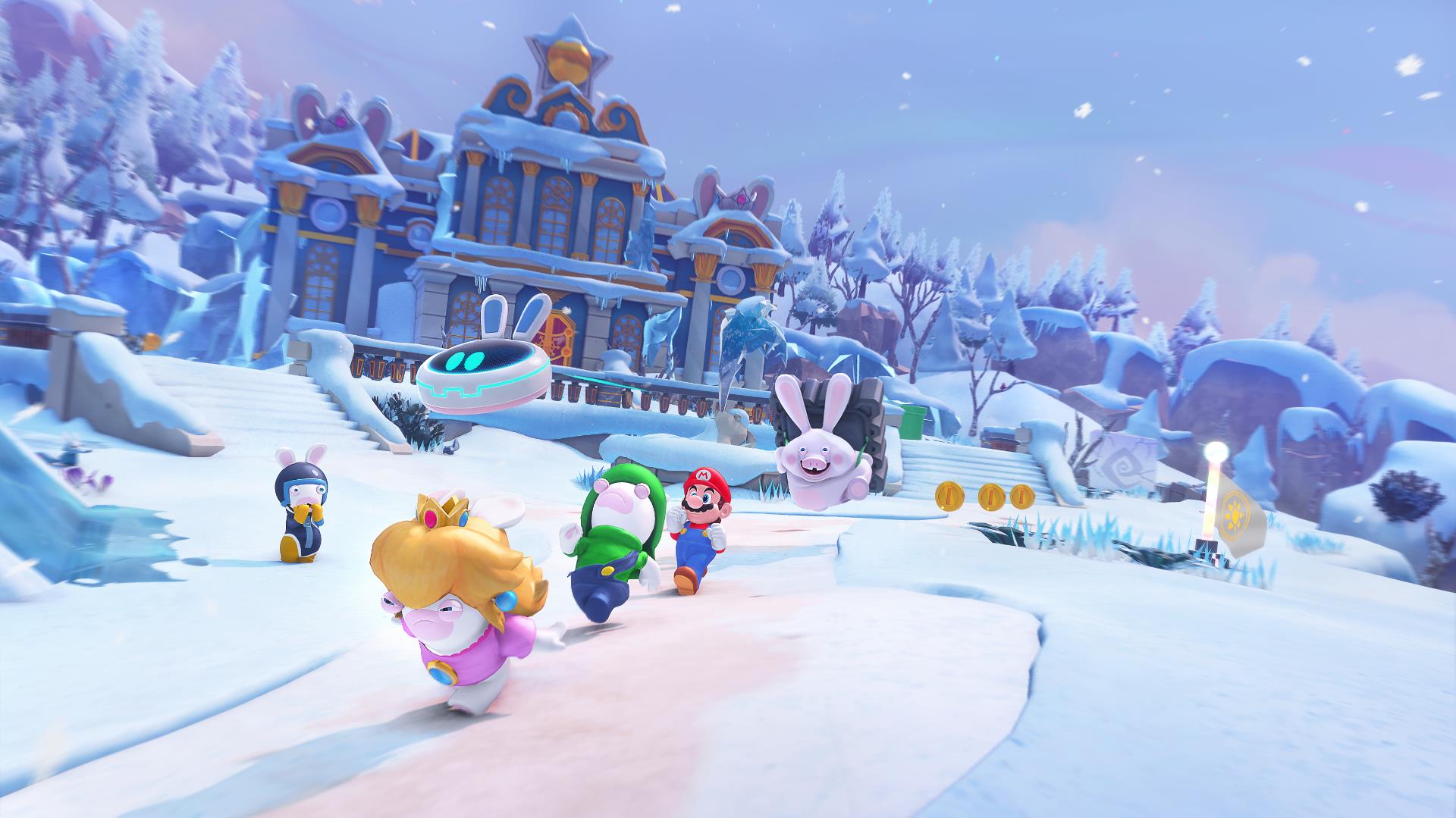 Mario + Rabbids Sparks of Hope is the game I wanted in my youth. I found myself looking at the game through the lens of a younger person, like a kid in middle school. The humor, combat, and even the puzzles would have made this a near-perfect game for a 12-year-old me, but I’m 35. Instead, Sparks of Hope is a well-made game with several issues. The puzzles are bland and simple, and the progression system seems basic; I often let the A.I. level me up as it seems to know best. These two flaws are easy to overlook because the combat is so much fun. The worlds to visit are full of side quests to keep you entertained if you need more than just the main story.

The biggest tell that I was playing something great was the loss of time. I would sit down with  Mario + Rabbids Sparks of Hope, and the hours would melt away. I wanted to push through a new world to unlock the next one. I found myself coming home and doing all the house chores as quickly as possible, so I could play Mario + Rabbids Sparks of Hope until I needed to go to bed. While the puzzles don’t hold much in terms of gameplay or time spent, often feeling like an afterthought, everything else is golden.

A worthy successor to the previous game. While Mario and his friends feel like themselves, the Rabbids provide the right spark of humor. Each character brings their own style, and finding the combination of characters that work best for the fight at hand is part of the fun. Different difficulty settings make Sparks of Hope playable for all skill levels, whether you want a challenge or just to enjoy the content. I didn’t find much replayability in the fights, but there were more than enough to hold my attention with the side content taken into account. Mario + Rabbids Sparks of Hope makes me feel like a kid in a good, old, classic, Nintendo way.