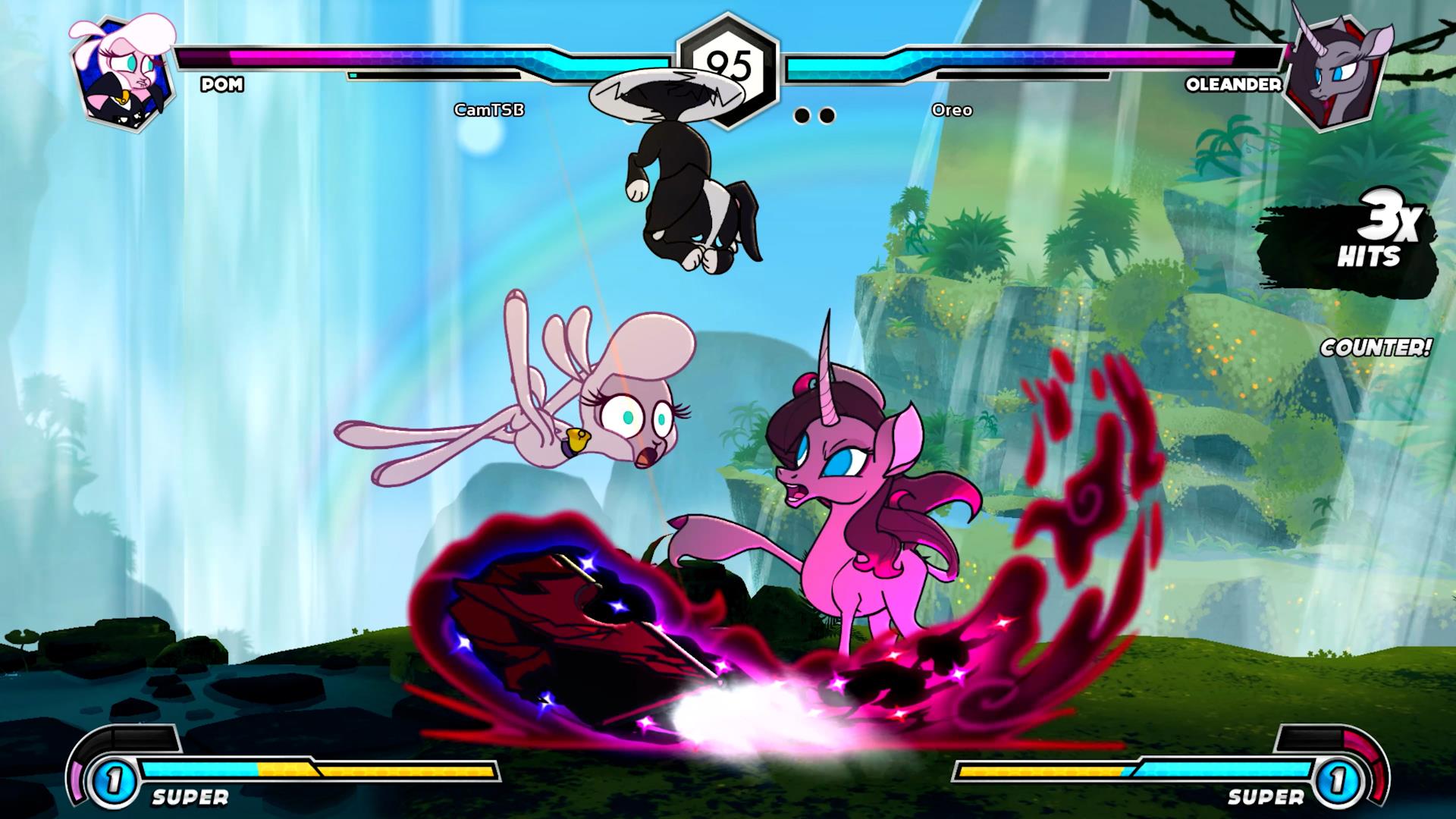 I would never ever call myself a fighting game pro. I have two tournament appearances total, and lost in the third, and second round respectively. In one of those tournaments, I lost to a player with an all button hitbox controller. All that being said, I do love fighting games, but I'm more old-school. I can hold my own in all 13 versions of Street Fighter 2, Mortal Kombat I and II, and a fair share of SNK games like Samurai Showdown and King of Fighters. The wombo combo (my take on multiple hit death combos) era of fighting games has since taken over, and, in turn, fighting games have become less accessible to your everyday casual. Modus and Mane6 have recently re-released something smack dab in the middle, in the most obscure way possible. It is a spiritual successor to a cancelled My Little Pony fighter, and it's called Them's Fightin' Herds. 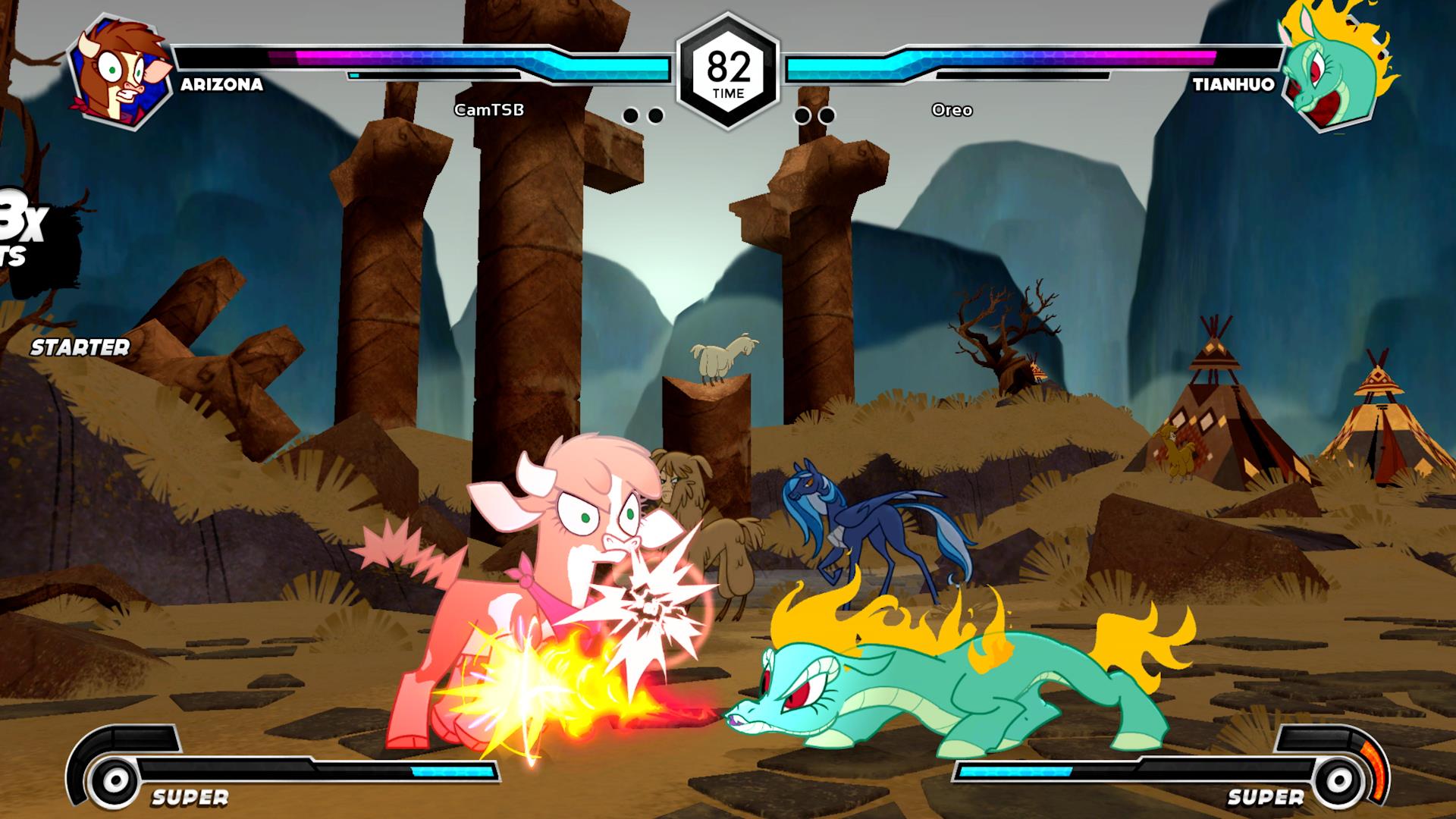 You read that correctly. There was an actual My Little Pony fighting game made based on the cartoon "Friendship is Magic" by Lauren Faust. It was completely finished, and ready for release. Of course, Hasbro wasn't having that, so they sent a cease and desist notice. KO. But then, Faust decided to join the Mane6 team to make sure the indie game had a whole new four legged cast. In 2015, they rebuilt the game, completed a successful Indegogo campaign, and finally fully released the game on Steam in 2020. Here we are today, with a beautiful, and accessible fighting game, in 2022, on all systems. And it gets better from there.

Visually, this game is gorgeous. The colors all pop on any screen. The characters are fully animated and have an animation for every hit, move, and line of dialogue. All the movement and attitudes, or lack thereof, are like watching a cartoon. The effects of the elemental characters, like Tianhuo's fire, or Velvet's ice, are well placed without distracting from the action on the screen. The backgrounds on the levels are even more spectacular. You can see the sunset, or the trees projecting shadows on the characters. There are different pallets available for each character, most provided by Mane6, but some created by creators. You can choose to have every stage presented in daytime, or different parts of the day. Even the character idle animations are amazing. This game is stunning. There are scanline filters, but I don't recommend them at all, in any way, shape, or form. Turn these off, and turn all the graphics settings to the max to appreciate the art of this game.

The audio is also absolutely fantastic. The game music is just great all the way around. In the character select screen, the music has a slight variation depending on which character your indicator is on, which is clever as hell. Each stage has music that fits the character it represents. The character voices are so good. They all have their own attitudes. Even the announcer has little quips, but they're not obnoxious or over the top. Arizona may be my favorite character when it comes to talking trash. She's just a little calf who has a hankerin' fer some hoof kickin'. Then she beats you down for an 11 hit combo.

Speaking of combos, this game definitely has some of the coolest looking ones, and an experienced player will show you all of them. Everyone's combos are mostly the same. There are 4 buttons: Light, Medium, Strong, and "Magic", and you can start most combos with a quick succession of "Light, Light, Medium, Strong". You also have a fourth button called "Magic", and you have a meter for these attacks. Some of them are used for projectiles, some of them are used to command the summons of the characters, or to even buff them. The Magic button can be used to start a combo or even makes for a flashy combo ender. Someone just jumping into the game can easily execute the combos, but the smart folks at Mane6 have added something called "Juggle Decay". Juggle Decay prevents you from getting smacked around with a 0 to death infinite combo. This is done by either letting you flip out of it, or using damage scaling to reduce the latter hits to do very little damage. There is a meter right below your life bar, and when it fills and turns red, your player will eventually just drop out of the combo. Now, some experienced people will find a way past this, reset a combo, and catch you off guard. You can save yourself by not even playing them at all, because when you are challenged, or you challenge someone, their ranking pops up before you accept the challenge. If you're an hour in, and your opponent has put in over 500 hours, avoid them. Trust me.

The multiplayer lobby has two versions. The first one is your run of the mill multiplayer lobby. You go it, choose a lobby, and fight, or you can create a lobby, and change your own credentials. You can make it a private or public lobby as well. The second lobby version is something they call a pixel lobby. This puts your avatar in a "top down visual lobby", which looks like a old RPG. You can walk around and challenge any avatar you want, or you can go to a statue and wait for someone to battle you. You can even walk around and set your avatar to matchmaking, and someone can challenge you without even walking up to you. Sometimes in this mode, you can find treasure chests, and get in-game currency to add accessories to your avatar. They don't offer any real attributes, but the made-up ones are hilarious. The sunglasses add +100 coolness, for example.

Back to the characters for a moment. This game looks adorable, and the characters may look like they're going to be harmless and sweet (I'm looking at you, Paprika), but these characters come well equipped to beat you down. Pom is a sheep dog, and brings out pups to attack you with, whereas Arizona is a calf who has dash attacks, and even has a hog tie rope, and yes, if she catches you with it, she says "Come 'ere!" Oleander is a unicorn, with a book derived from Dark Magic, and has teleports and fireballs. All of them have different moves. There are no Ryu and Ken pallet swaps here. Every character is original, and different in their own way. And if you fight someone who has mastered the llama Paprika, just block until you see an opening. 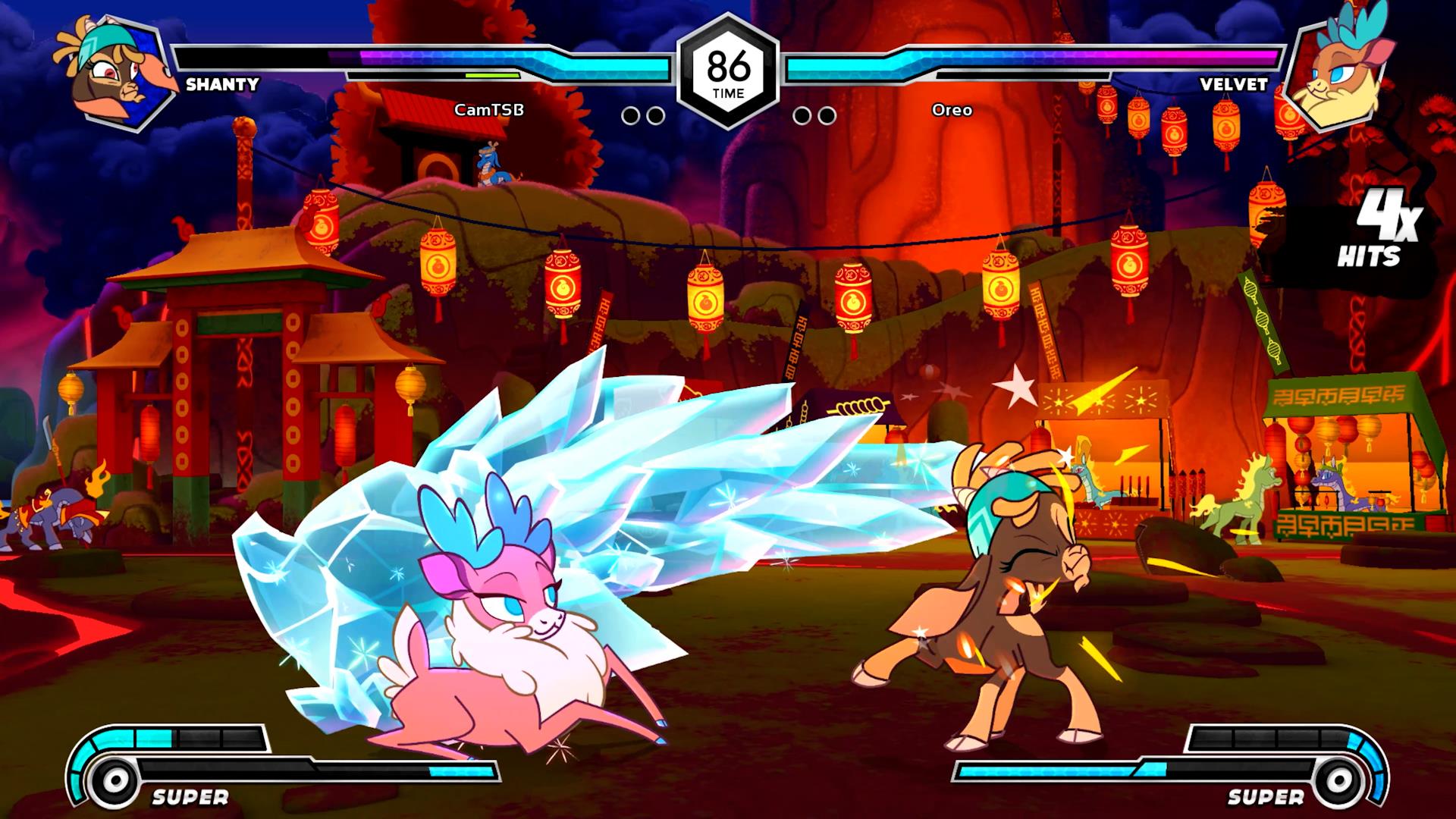 The training mode shines here. You can go through a tutorial where the game will teach you the basics, such as jumping, blocking, and air dashing. As you progress, you also get into countering, stunning, and block pushing. The training mode is very precise, and though you can skip through the modes, it doesn't let you proceed generally until you have it down. It teaches you pretty much every mechanic in the game, and furthermore, mechanics featured in other fighting games. There is also combo training available for each character, and even hitbox training, for fighting game aficionados. Training mode also teaches you that everyone's super attack input is the exact same. The super attacks can be used once you fill your meter at the bottom of the screen. Level one supers are used the most, since they are easy to fill. Level two supers can only be used DURING a level one, and are sometimes utility supers. Pom adds a bigger dog, while Oleander summons "Fred" from the book. Arizona, however, has an additional, and very powerful kick. There are also cinematic level three supers. You don't see them during a best two of three match, but if you do, they're pretty fantastic. Pom's is a counter, FYI. You're gonna love it.

Usually, fighting games have an arcade mode, where you just go through and fight each character, then fight a final boss. That's present here. There's an actual full story mode, where you take control of Arizona. And it doubles as a mini RPG. You interact with NPCs, and advance a very interactive story. Arizona has been chosen as the champion of the prairie, and is sent on a mission. Evil predators have resurfaced after years of being sealed away, and you take Arizona on an adventure through different territories. You can find unlockable items for your lobby avatar, while traversing through towns, caves, and kingdoms. You even have enemy encounters, and have to fight some of the predators, like wolves, snakes, and even a grizzly bear. Chapter one is available out the gate, with chapter two coming soon. 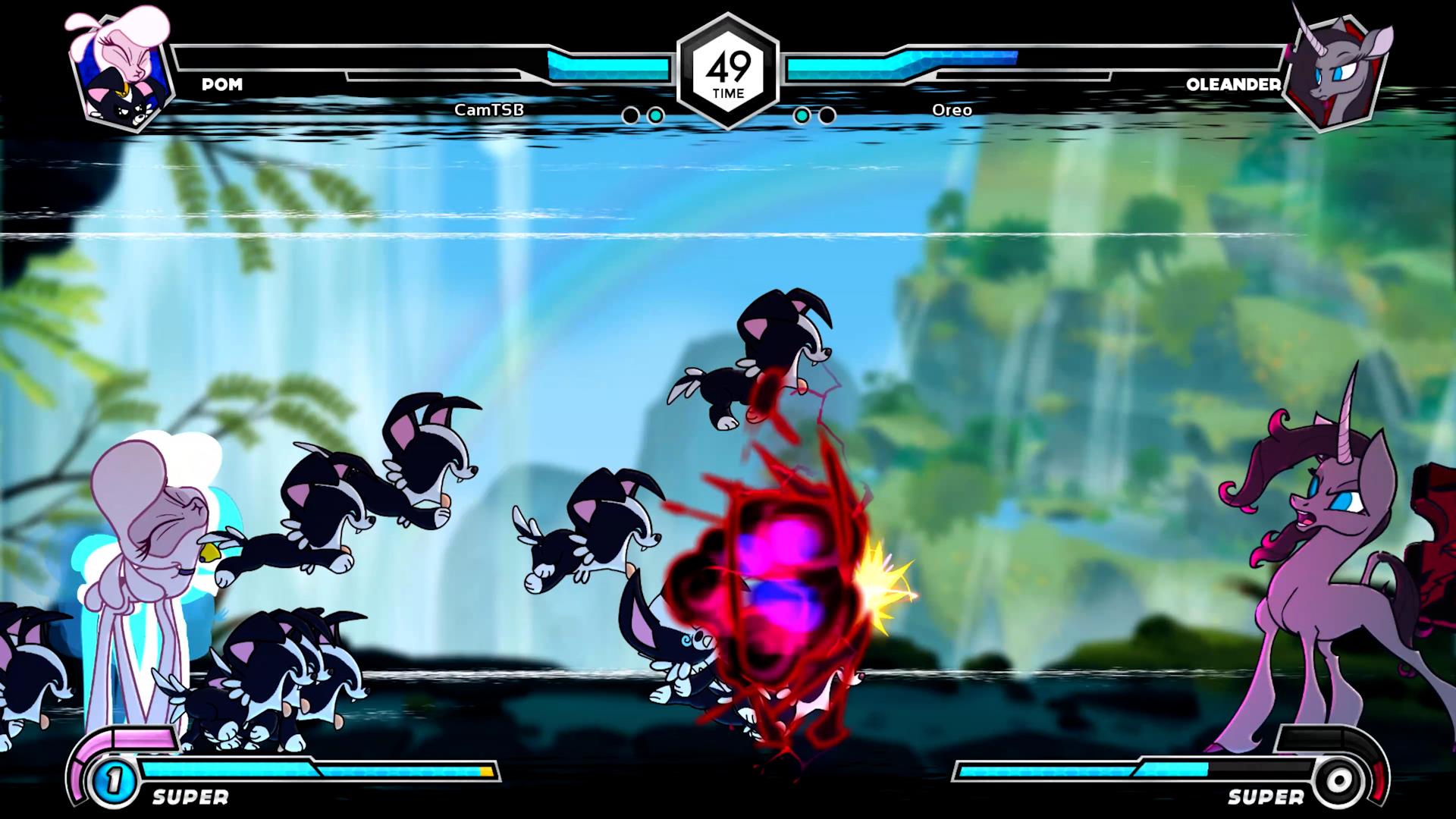 Rounding out this amazing and very deep fighting game is a full replay system, where you can fast forward, rewind, and even advance each level frame by frame. You can join any lobby in any part of the world, because the game also has GGPO's rollback netcode. You can change the delay before you face your opponent. You can change your buttons, and even set macros. I would love to see Mane6 or Modus separate those people who use macros from people who don't, ala Capcom Fighting Collection, but maybe in a future update. Speaking of, there is DLC coming soon too, as a new character "Texas" has just been revealed. Remember, this game was released on Steam two years ago, and it's full crossplay through console and PC, so beware of those people who have two years on you. If you want to be competitive, stay in your lane.