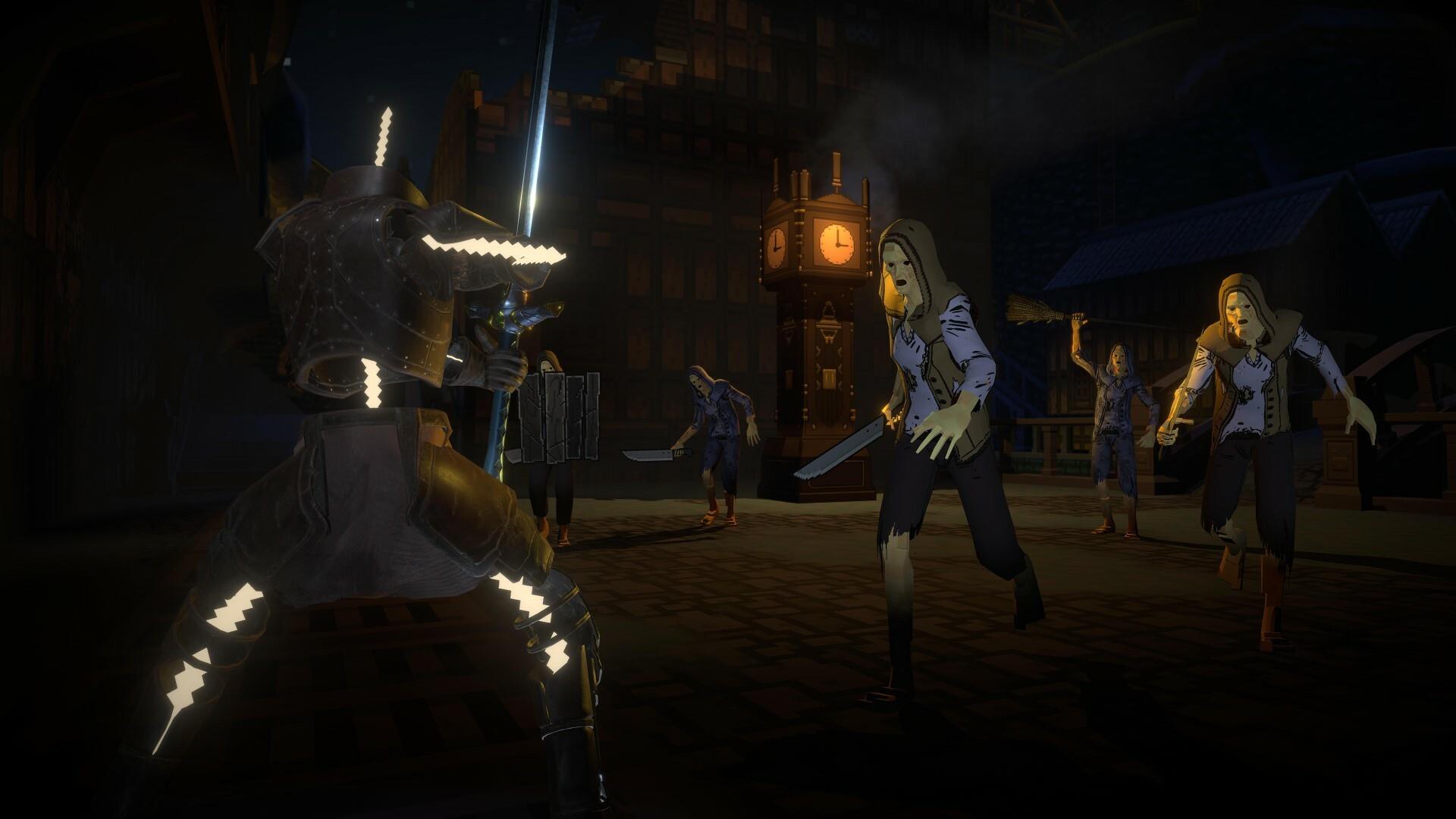 The Last Hero of Nostalgaia

Yes, you read that right… Nostalgaia, not nostalgia! Not to worry –The Last Hero of Nostalgaia has everything to do with nostalgia, because the entire world of video games is fading away into pixelation. This is the enticing premise of developer Over The Moon’s newest project, where you play as a literal bundle of sticks on a mission to save Nostalgaia from collapsing into oblivion. Aside from the humorous play on words, The Last Hero of Nostalgaia is an indie action role playing game that takes a satirical jab at the Souls-like genre. The game does a wonderful job taking you on a trip down memory lane, whilst giving you the masochistic beating of a typical Dark Souls game and delivering some comical jokes along the way.

You start the game off with hands down the most intricate and complex character customization system I have ever seen. I can really see my stick figure made of / and | and \ change in size as I slide the body type bar and experiment with the different hair styles that my hero can wear. I haven’t enjoyed this sort of humor in a video game since… forever. If it wasn’t clear already, you take the role of a pixelated stick figure, spawning into the world of Nostalgaia as the last hero to save it from crumbling. There’s also a pissed off narrator that seems to insult you and your deeds every chance he can get. Nostalgaia isn’t very welcoming to heroes, so get ready to face some pissed-off residents. The game often features self referential humor along with breaking the fourth wall, allowing for an overall delightful experience you don’t usually get to see in a video game. 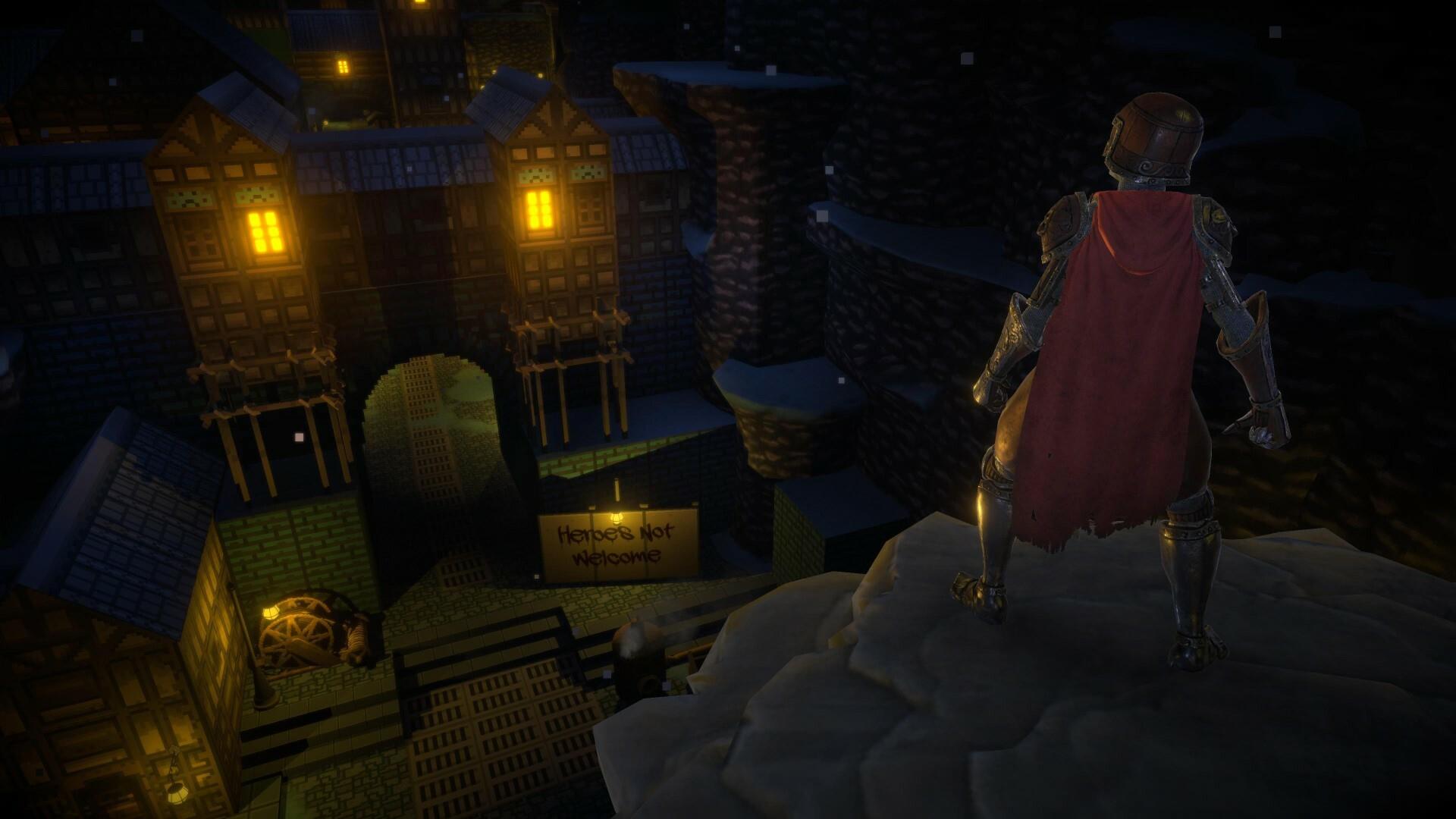 Combat in The Last Hero of Nostalgaia is what you would expect in a typical Souls-like game, with attacks and dodges that consume stamina, dropping your hard earned souls upon death, unlocking clever shortcuts, and resting at bonfire-like checkpoints. You even see fat rolling from wearing armor that’s too heavy. Pick between one of five default classes that favor different attributes. There are no difficulty or accessibility options so you know the developers mean business when it comes to challenge levels. Low level mobs won’t shy away from ganging up on you then stunlocking you to death, and bosses can easily two-shot you if you aren’t meticulous about your moves. This is definitely not a toned down version of a Souls-like game just because of its satirical nature, so don’t be fooled by the game’s comedic front. The only grievance in regards to combat is how little reach any of your weapons have. This makes weapons such as the spear or greatsword much more appealing despite their slow moveset. You can barely land a hit with a sword on an enemy unless you are pretty much next to them side by side. I can’t fathom using a dagger or knife even because it probably requires you to be hugging them to hit.

An outstanding feature that sets Nostalgaia apart from other games is how seamlessly it incorporates upgrading your gear with the overarching narrative. You see, every piece of equipment you own, whether a shield or helmet, has a backstory tied to it. They all start off as an unfinished or undiscovered version of itself at first, and you must use the clues from the description of the equipment to locate the place to restore it. For example, a gigantic spear hinted that its place of awakening had something to do with performing and being the center of attention. Lo and behold, the location ended up being a circus stage that I remembered passing by. Not only did the spear turn from a blurry pixel into a full fledged high-res weapon, it also got a latent ability unlocked and an attack boost. With the vast number of weapons and amount of armor to obtain in this game, this is an excellent method to approach exploration, puzzle solving, and narrative building. I hope this won’t spoil too much but I found a shield that links the past and a helmet from a dead space. 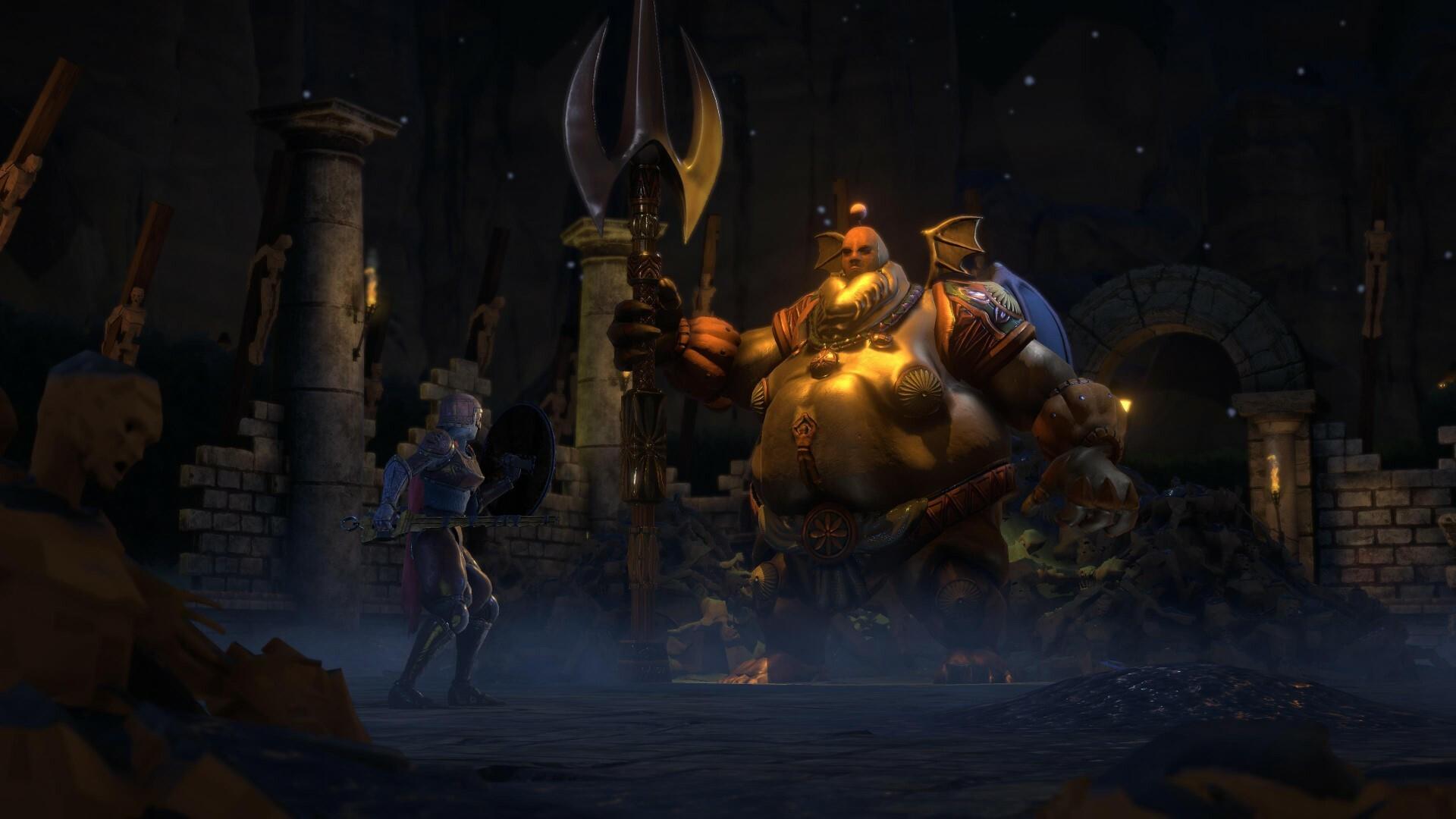 I really appreciate the attention to detail Over The Moon put into this game, especially given the game is a love letter to FromSoftware. From having the ability to write and rate player messages like every other Souls game to speaking to mysterious NPCs that give obscure introductions and then disappear into thin air, this game has all the little quirky details that make FromSoftware games special. Heck, you can even attack and kill friendly NPCs in this game and have them turn against you! It’s also nice to see that this game also supports seamless two player co-op without the need to go through the weird hassle that most Souls games require you to do.

On the other hand, my oh my, the controls suck on a PC with mouse and keyboard. There are some extremely awkward default bindings such as the sprint button bound to left control and the heavy attack button bound to the T key. The game also doesn’t do a great job teaching you in the beginning what all the controls should be, so I had to resort to looking at the settings menu. Even then, I still don’t know how to parry on a keyboard because the instructions are so unclear. You can, however, rebind controls but I feel like these types of games are better played with a controller or on a console. Performance on PC with a Nvidia GeForce GTX 1070 is passable, with occasional stuttering and frame drops. Certain areas of the game will also freeze until it is loaded but nothing took too much away from the overall experience. 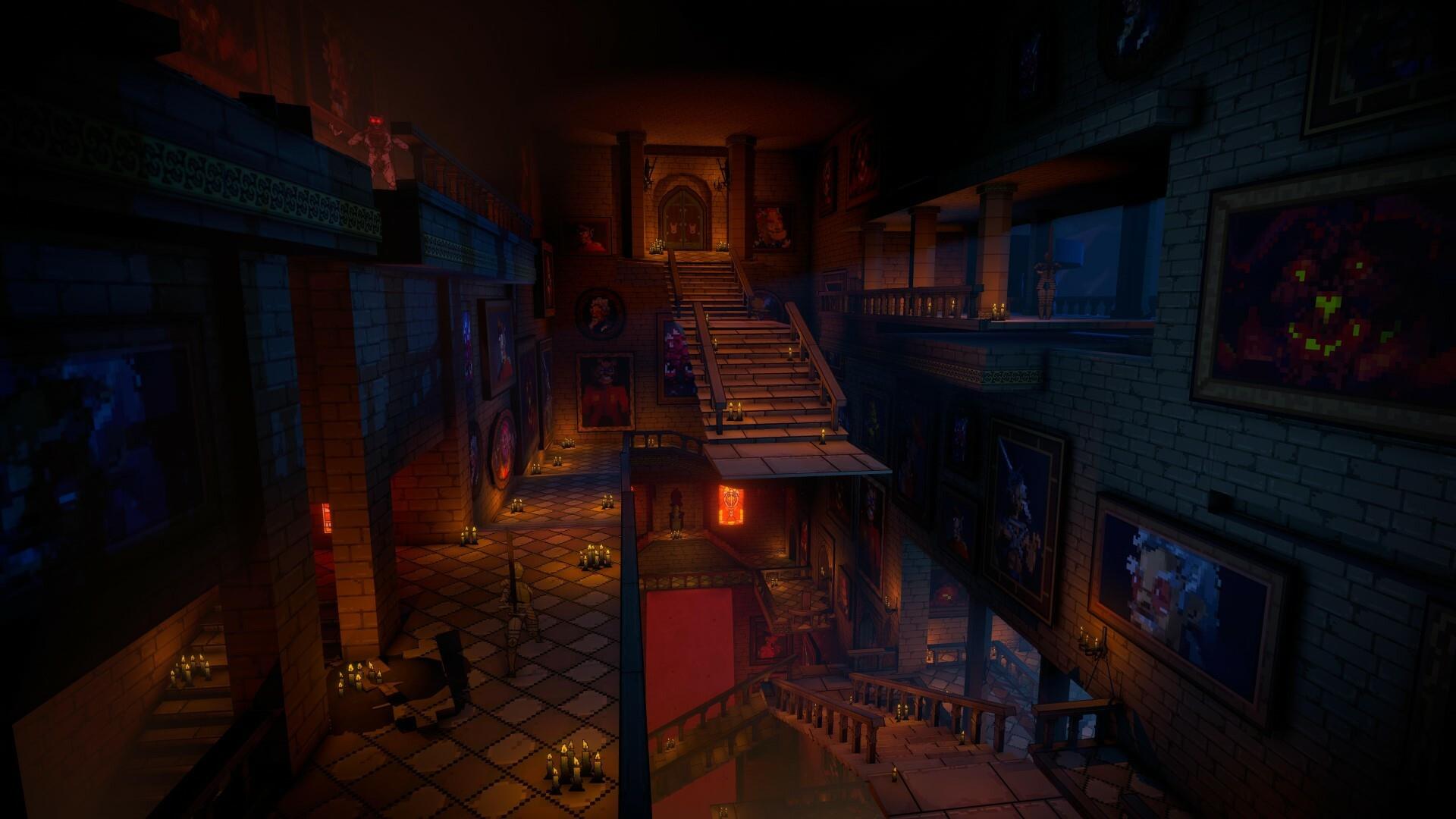 There are some questionable and frustrating design choices too, especially when it comes to level traversal and stamina management. There’s no traditional form of teleportation between any checkpoint as you can only set the fast travel destination to one particular location when you are at that location. This means if you need to go to the very beginning area of the game, which you will need to do, you’re in a late game area, and you didn’t set the teleportation area to the beginning area, then you need to physically walk yourself back. This mind-numbingly frustrating experience is exacerbated by how fast your stamina gets consumed when you run, so prepare to spend upwards of five to ten minutes walking and running across the entire game world.

The Last Hero of Nostalgaia cleverly blends together challenging combat with sarcastic humor that never takes itself too seriously. The story it tells will mean a lot to gamers that have been around for the past twenty years or so, with many nods and references to iconic games. Out of all the things in the rich world of video games, I never thought I would be rooting for a pixel of sticks, made from the strokes of a keyboard. With excellently drawn artwork, a boppin' soundtrack, a jokester narrator, and tons of content, this is a Souls-like indie game that you don’t want to miss. Just remember to play on a controller or console because keyboard and mouse controls are a bummer.

It’s not everyday you see a refreshing approach on the Souls-like genre, especially one that doesn’t take itself too seriously. The Last Hero of Nostalgaia does just that, putting you into the pixelated boots of a bundle of sticks on a mission to restore the entire world of video games. Developer Over The Moon does a fantastic job wrapping what we all know and love about Dark Souls with a layer of satirical flare and video game history. If you can get past some frustrating design choices and janky keyboard controls, then you’re in for a nostalgic treat.