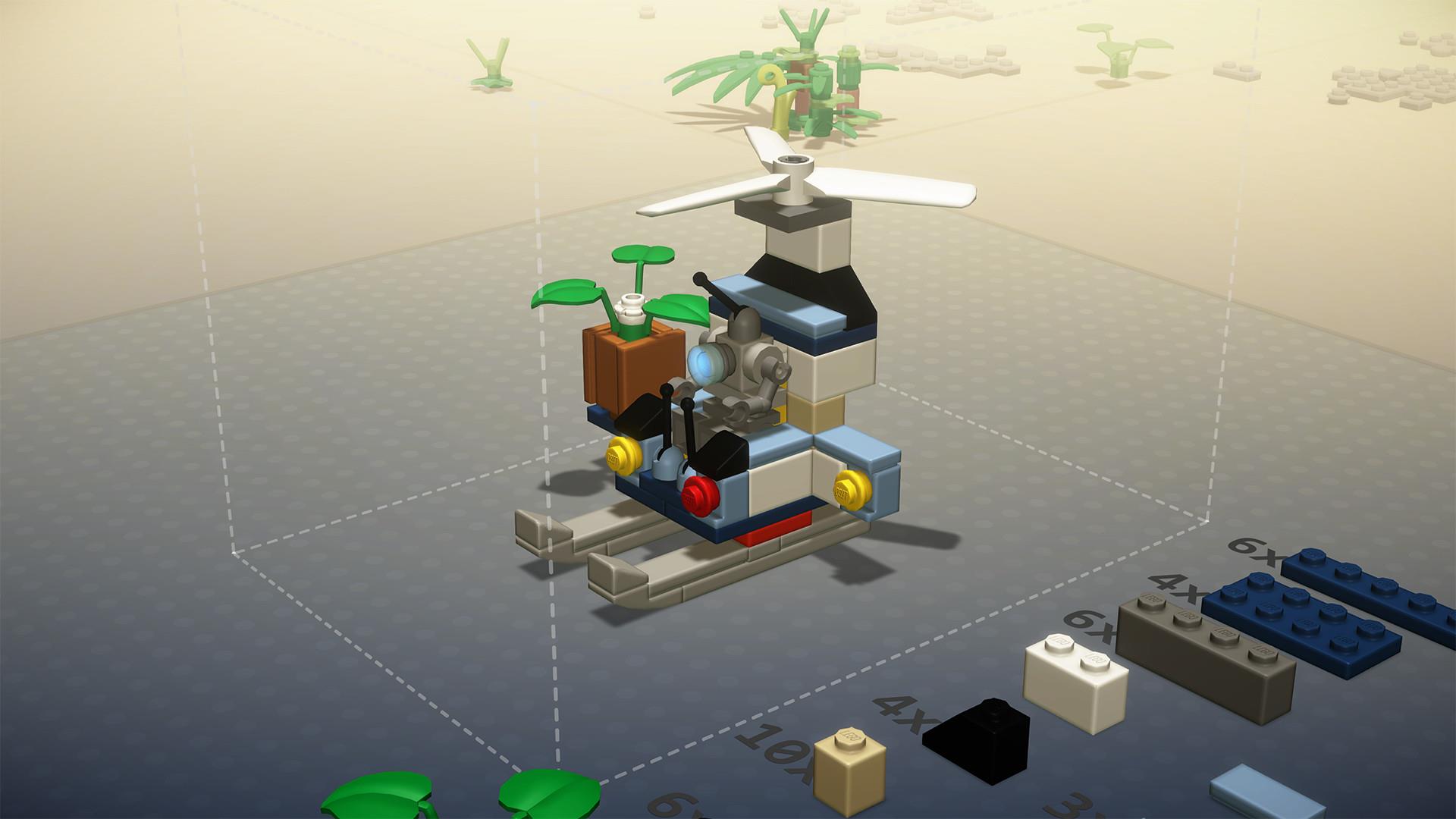 Written by Elliot Hilderbrand on 10/11/2022 for PC
More On: LEGO Bricktales

Lego Bricktales is the closest I’ve come to reliving some of those childhood memories of building Lego sets on my bedroom floor. While there are no manuals to help with Bricktales’ puzzles, the feeling I had while playing was similar to that of sitting by myself, creating my own little world. Not everything is perfect, but it doesn’t need to be. The puzzles in Bricktales kept me occupied for hours. Every time I sat down to play, I spent at least an hour, if not two, playing.

Lego Bricktales has a story to it, I guess. Your grandfather's amusement park is about to close if necessary repairs don’t happen. This is just an excuse to take the player from world to world. Each biome or world has its own unique little story. For example, in the jungle biome, you need to rescue everyone from a crashed flight. There is also a desert to explore, a city to walk around, a pirate-themed Caribbean, and a medieval world to meddle in. Most of the worlds felt like the classic Lego worlds I played in, creating real-life Lego builds. I found myself feeling nostalgic while exploring and creating with Bricktales. The story gets you from one to the other, but beyond that I found little to no reason to pay much attention to the narrative. 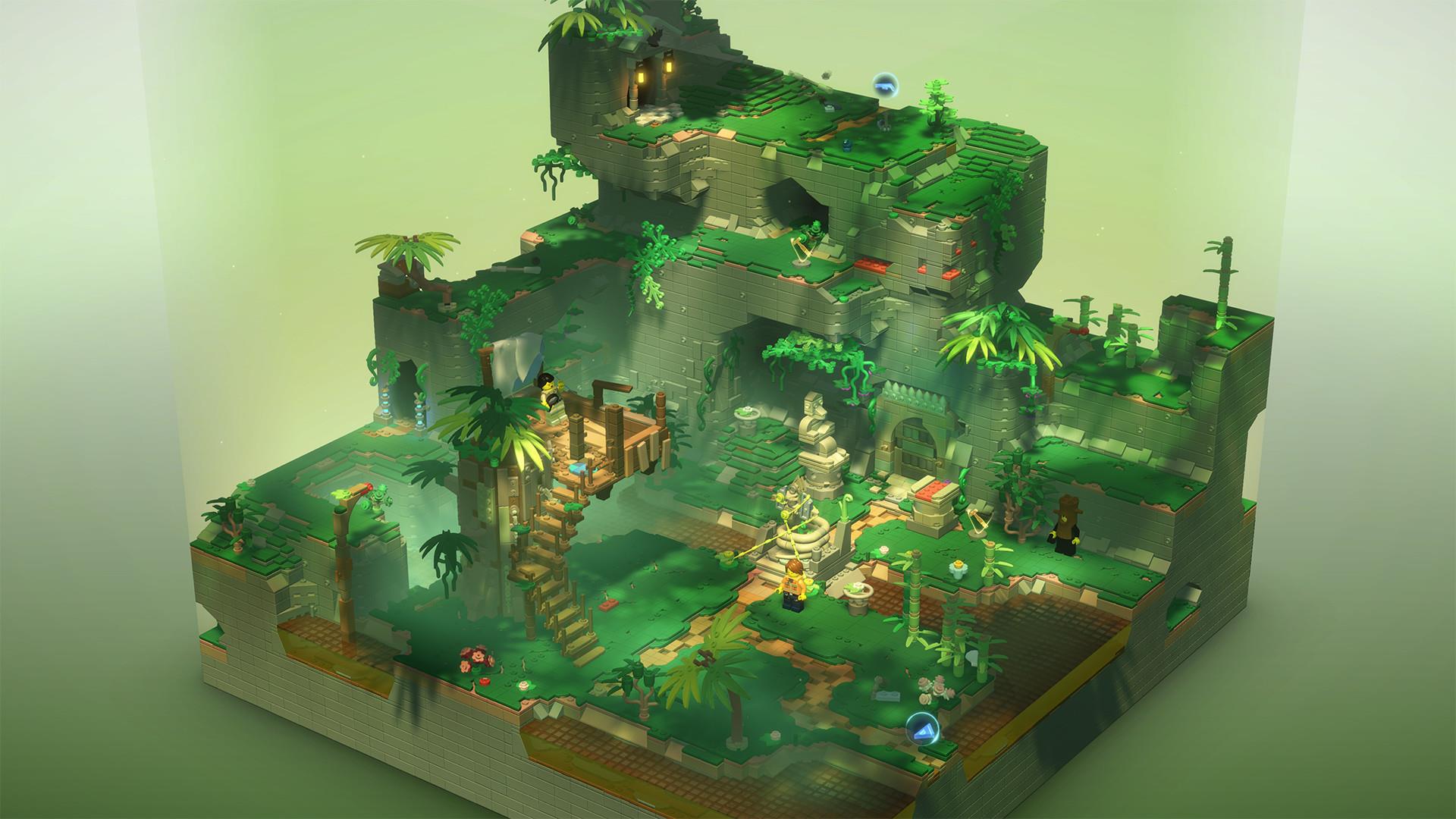 Instead of getting lost in Lego Bricktales' storytelling, I was lost in a sea of physics-based puzzles. I am not a physics guy. The hardest class I ever took in college was an intro to physics class. The class began simply enough. On day one, the professor explained how fast a ten-pound bowling ball fell when it was five feet up. He wrote the formula down, and everything made sense. Next, he explained that if you were standing on a twenty-foot tall ladder, how fast a ten-pound bowling ball would fall. The higher the bowling ball is, the more speed it gains as it falls. The formula was similar enough to understand. Finally, he said something like, if you’re in an airplane flying at 500 miles an hour and you drop a ten-pound bowling ball, this is how fast it will travel, and my understanding fell to earth as quickly as the bowling ball. Needless to say, I did not do well in the class. I’m 35 years old, and I still wake up with nightmares from that class. All of this is to say that physics-based games typically don’t get much more than a passing glance from me. Lego Bricktales is different.

Physics plays a huge role in Lego Bricktales. When designing a bridge to cross or an airplane to build you need to make sure it can withstand the strain you put on it. While my math skills are terrible, I never felt like Bricktales unfairly punished me for creating a mess. Some challenges are just hard. I found a bridge I was asked to build early on in the first world was downright frustrating. I made seven or eight bridge attempts before finding one that worked. But the rules and math that Bricktales uses always felt fair. Early on, I sturggled to understand the math and physics of Bricktales. Once I had finished the first world, I no longer felt that way. I would have loved some type of helping hand or some pointers after a handful of attempts. Some pop-up hints would have been nice, like "don’t focus on the big pieces", or "start from the top and work your way down on this puzzle".

Playing Lego Bricktales has you encountering one puzzle to solve after another. Build a bridge, scale a wall, rescue someone from a tree. Bam, bam, bam. In between, there’s a little gathering to do or a chance to customize your character. When you walk into a new section, there’s a puzzle, or four, to solve. And the puzzles are great. You may think from what I've said that the entire game is just making bridges to cross, and while there are those, Bricktales wants you to do a lot more. Build a shrine, vehicle, or create a device to zipline down to safety. Bricktales has enough different puzzles that I never felt bored by my next challenge. 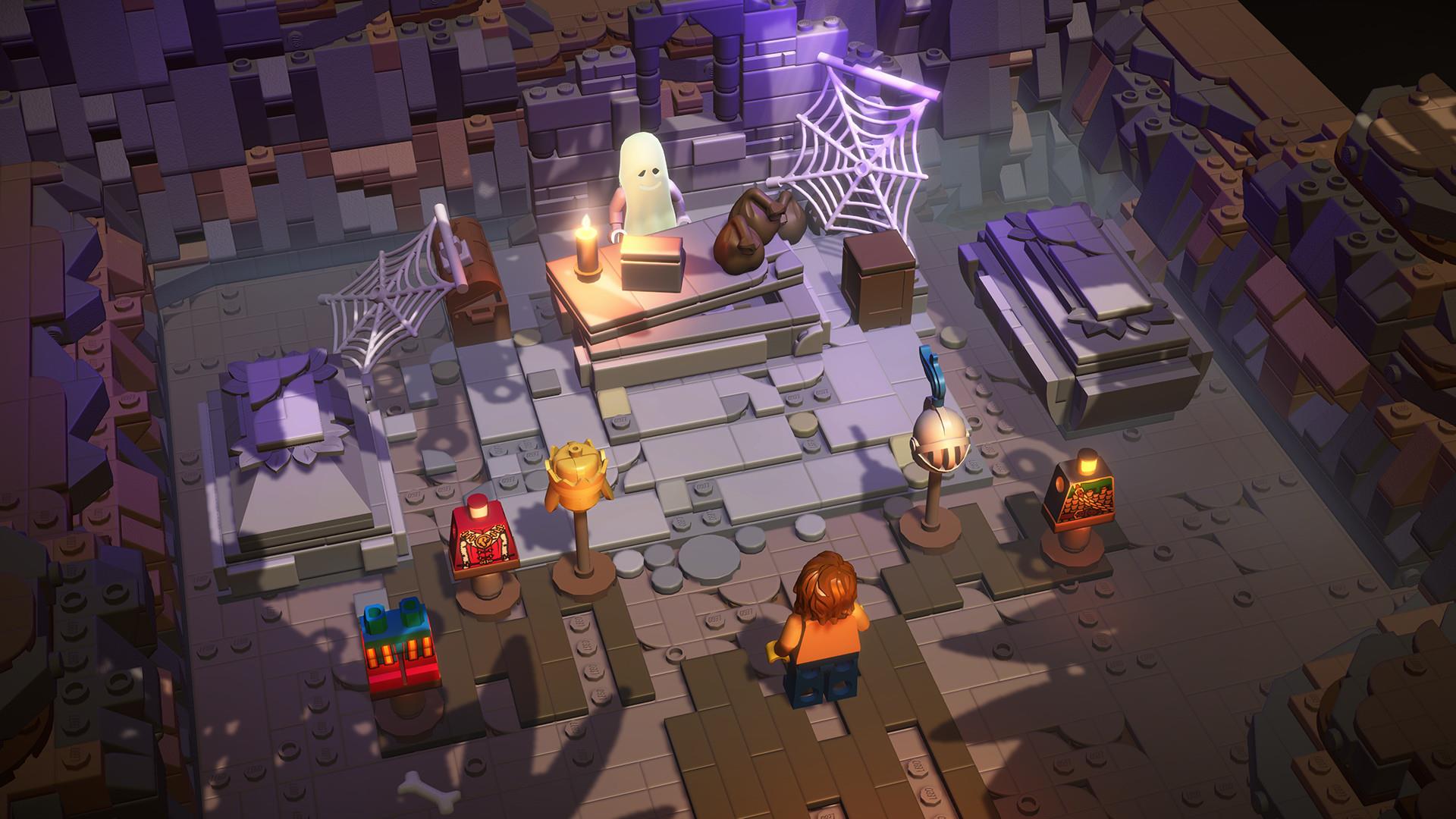 It’s not all physics and math. There is a huge number of objects to collect throughout each world. There are also plenty of outfits to purchase; being able to dress up your character in every collection of Lego that I could think of is a nice touch. The collecting, along with the sandbox mode, did not do much for me, but might be better for a younger player looking to supplement the puzzles. I found myself finishing each puzzle and moving on. But if I wanted to be more creative, I could. In fact, Lego Bricktales lets me be as creative or basic as I want; only my own lack of creativity hampers me.

You only need to build something that gets the job done; you’re not judged on how your chopper looks, only that it will hold your weight. Once you build your practical bridge (or whatever) you can go back and spruce it up aesthetically in Lego Bricktales' Sandbox Mode. It’s not as open as the name would imply. The mode allows you to take your finished product, bridge, machine, whatever, and make it look fancy. I played around with the mode to get an understanding, but it did not hold my attention. I found most of my creations to be bare bones; I got the objective completed, and I didn’t need more. 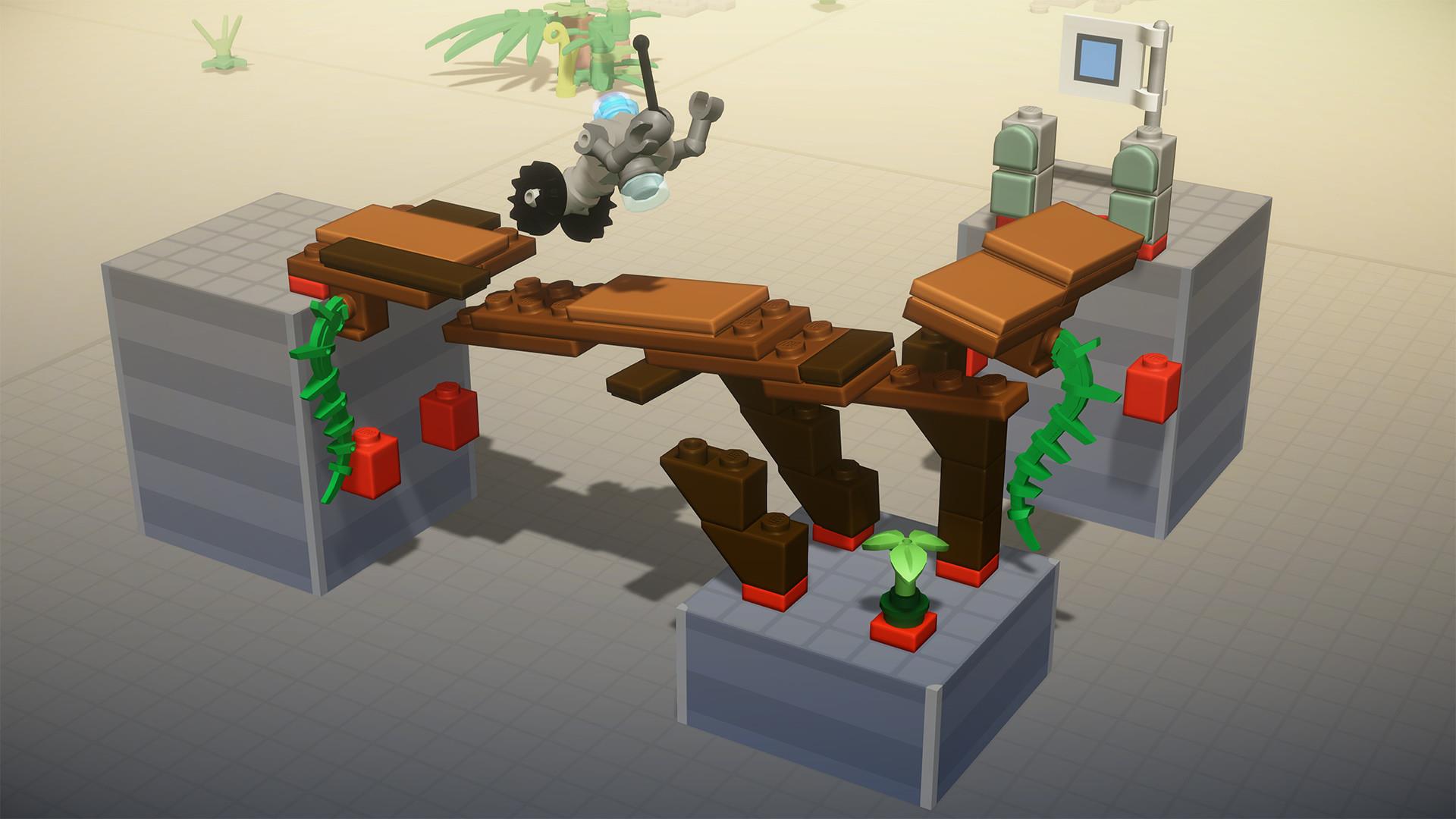 I love the puzzles Lego Bricktales has; what I don’t love are the camera angles. In my first hour of playing, I found the camera to be a nuisance about 20-25 percent of the time. As I progressed, and the controls felt like second nature, I'd say I was only bothered about 10 percent of the time. I frequently found myself having a brick placed incorrectly by only a place or two. Since the majority of playtime is spent in a blank empty space creating whatever current contraption you're working on, the camera should never be an issue. Bricktales allows me to move up and down, side to side, but the camera itself is stationed at an angle that - on occasion - creates frustration. For a game where placing the right brick at just the right spot is crucial, at times I was angered.

Elements of Lego Bricktales make it seem like it is struggling with it's identity. There are bits that feel like they are pulled from standard Lego games; go around and collect everything you see, make your Lego designs fancy, and customize your character to your heart's content. But deep down, Bricktales is an unforgiving physics-based game that can drive you crazy - but the good kind of crazy. Build pillars that can handle the weight of two people, or design a bridge that can support you walking across. Dressing up, collecting, and buying clothes didn’t do much to move the needle for me. The puzzles are a whole other story; challenging, fun, and time-consuming. The satisfaction of building a bridge I just spent 20 minutes on and seeing it work gave me the same feeling when I would finish a physical 100-piece Lego set. Lego Bricktales is a Lego game aimed at adults with a ton of elements younger players will enjoy.

Since solving Lego-based puzzles is at the forefront, Bricktales doesn’t feel like it’s aimed directly at the younger crowd; the sometimes difficult-to-solve conundrums might turn kids off. There is plenty for them to get into, like collecting in-game items or the Lego player customization. The physics-based puzzles to solve were excellent; some were easy, and others were a challenge, but all were rewarding. Even with the challenge, Lego Bricktales is the closest I’ve come to feeling like I was playing with physical Lego bricks. Playing Lego Bricktales is not the same as sitting on your bedroom floor and letting your imagination run wild, but it’s close.