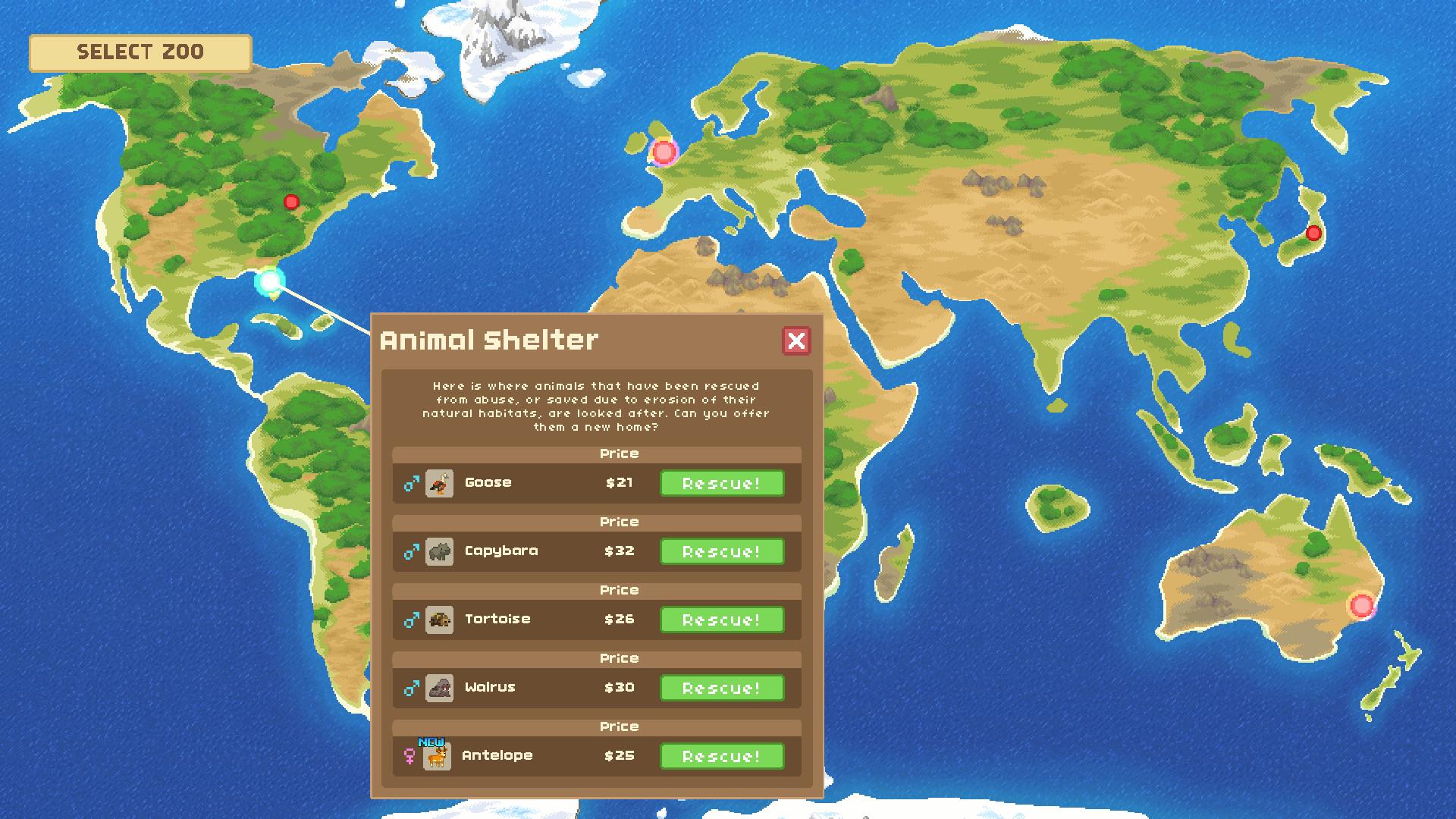 Let’s build a Zoo has a lot to offer. You can choose what kind of zoo you want to run. Want to splice together a rhino and a pig? You can with Let’s Build a Zoo. Want to dress up a dog in a lion costume to fool guests and then sell that dog to black market animal collectors? Also an option. The animal splicing aspect is a pretty big selling point. This is not a real-life zoo management game but rather a tongue-in-cheek fun look at it.

Animals are cute; you can put them into cute situations. Giving animals a bounce house in the enclosure not only is fun but also helps sell more tickets. Other expected aspects like trading and breeding are here too, but not a huge focus or feature of gameplay. Except for the splicing-together-hybrid-creatures thing, the animals themselves are a little in the background. Let’s build a Zoo is more into managing your zoo than caring for the animals. That’s why you hire staff to look after them so that you can focus on the big-picture stuff. 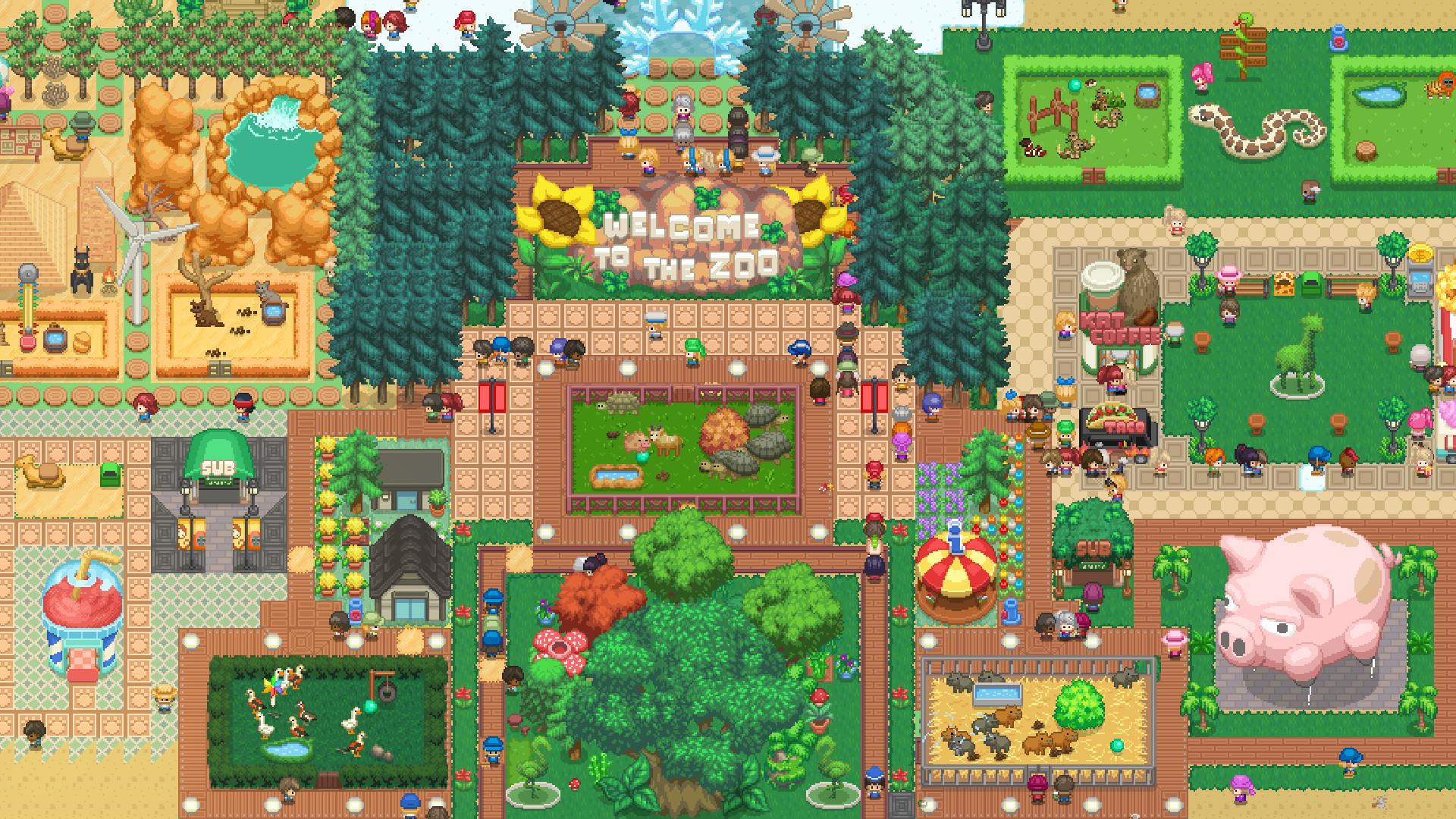 Let’s Build a Zoo needs a better tutorial or opening. While the game does show you how to do the main line elements, it struggles with the smaller, more complex later game mechanics. Building an enclosure is simple. Adding animals to it the enclosure is too. But moving animals from one enclosure to the other is a pain in the butt. Let’s Build a Zoo never shows you have to do that; you have to figure it out independently.

The game also doesn’t tell you how to hire more employees, just that you need to hire more. The menus become a bit daunting; the writing feels small on my tv, which doesn’t help. I was greatly confused at the beginning about putting drinking water into the animal’s enclosures. I would put the trough in, but it would not fill up. Turns out I needed to have a waterline available to fill the water. Took forever to learn, and even longer to find where it was on the menus to place on the map. 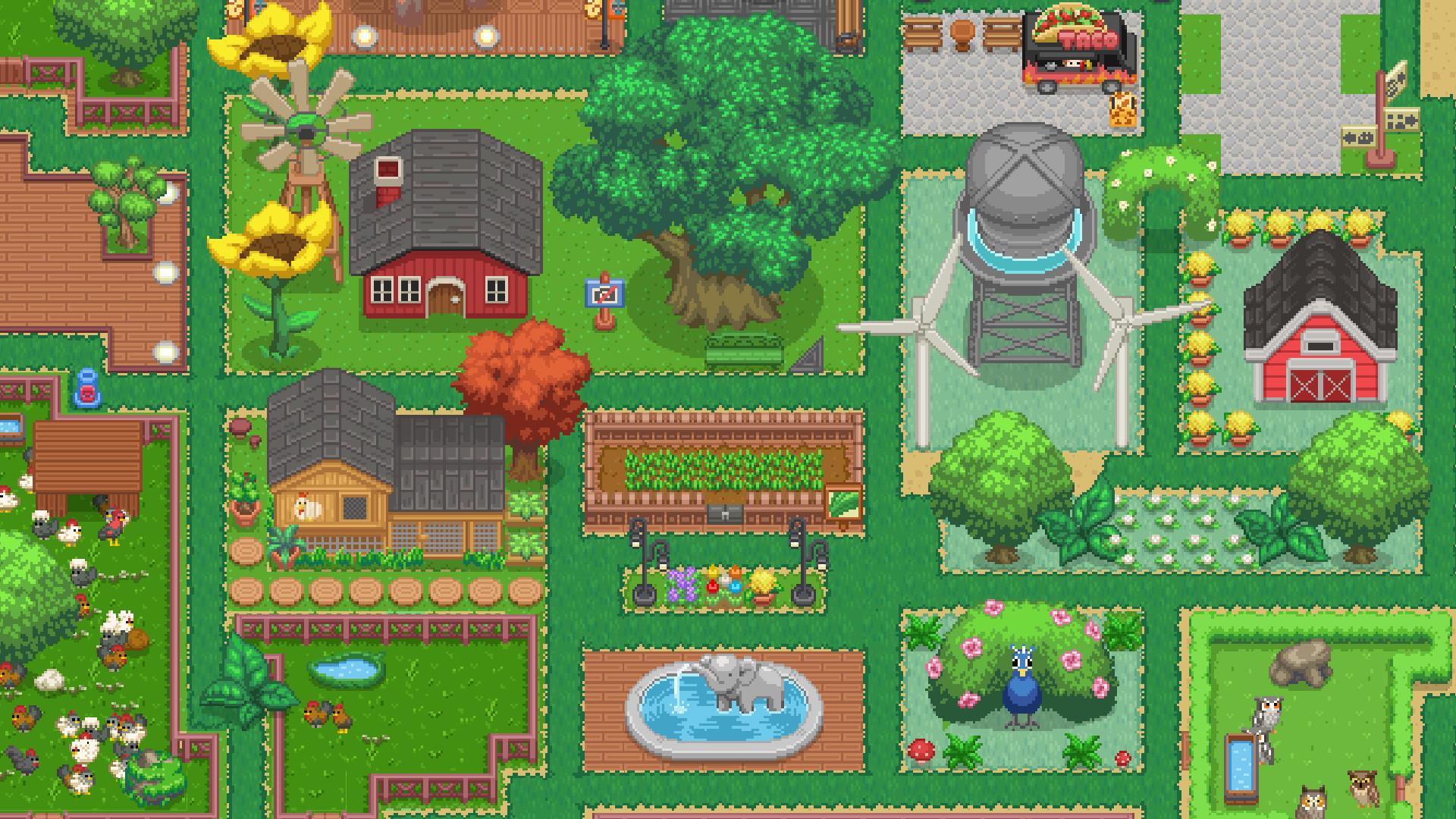 After an hour of playing, Let’s Build a Zoo begins to feel like a bigger and bigger mountain to summit. At the start getting tasks done takes little effort. I found myself making one enclosure after another, and the money was flowing in. Eventually, Let’s Build a Zoo feels like a steep hill, then a longer one, and finally Mount Everest. The prices of land, buses, and employees all skyrocket. When I first noticed, I was a little upset. It felt like the game entered mythic mode. But when it happened, it allowed me to slow down my expansion of the zoo and focus on making what I had already built better. I started to make my pathing look more refined. I chose to build a food court instead of placing food buildings in random open spaces.

While the hill does turn into a mountain, the mountain is not impossible to climb. Thankfully nothing feels overwhelming with Let’s Build a Zoo. There are a lot of factors to consider and take care of in a zoo. Guests leave trash, animals are not getting enough food, and they are pushing up against enclosures that are too small. But you do have some ways to catch up. There is always research available that can help you upgrade something for your zoo. You can slow down or even pause the time in the game to catch your breath. I never felt like everything would come crashing down in an instant. While a lot of that can sound boring in real life, the pixel world of Let’s Build a Zoo makes these into enjoyable tasks to complete. I loved being able to double my guest visits within a week just from moving the location of items in my zoo.

Let’s Build a Zoo includes a humorous morality system, though it feels a bit one-sided. The choices are very black and white. Do you want to help save and foster these animals? Or do you only look out for yourself? Choosing to be evil is often funny, but comes with consequences. If you make too many evil choices some of the research options become closed. This turns your zoo into more of an amusement park; it also becomes a less fun game. In my original playthrough, I went straight boy-scout; it wasn’t hard to do, and the overall game was a little more challenging. Even with my original save being more difficult to play the overall zoo looked better, and I had a better time. I played as a good zoo keeper, choosing to do the right thing any chance I could. Sometimes I wanted to do bad stuff, like feeding protestors to my snakes. I'm being good, always doing the right thing; why are you protesting me? But I held back and didn’t feed them. 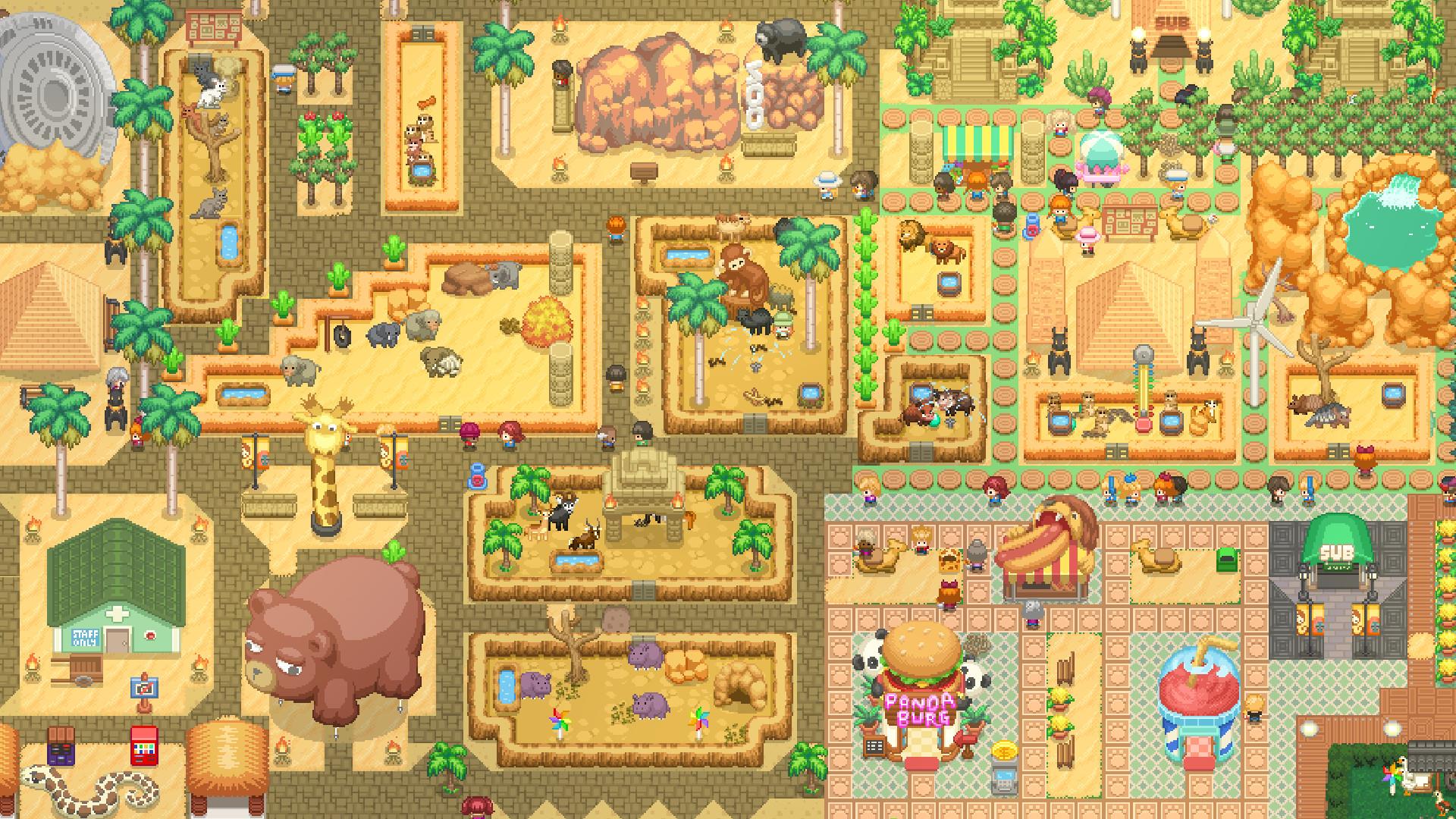 Having played and reviewed Let’s Build a Zoo, you may think to yourself, Elliot, didn’t this game come out last year? Why yes, it did. But recently there has been a DLC, Dinosaur Island. This included new quests not previously in the basic Let’s Build a Zoo. There are more animals, like dinosaurs (obviously). There are new shops and decorations as well. I have only played Let’s Build a Zoo with the Dinosaur Island DLC already in my game. I notice the difference in quests that deal with dinosaur-related gameplay elements, and I’m assuming that has to do with the DLC. But other than guessing what is or isn’t part of the DLC it seems as if the two flow effortlessly into one another.

Let’s Build a Zoo is properly named. You begin with nothing - just an entrance and an office building. The amazing part is what you can turn that into. The problem is, it is all up to you. You have to be creative with how you build your zoo. If you lack creativity then the struggle of Let’s Build a Zoo is real. I also loved the morality system, even though the choices seem very black and white. I found myself switching to a new save after a while just to experience the other choices.

You begin with nothing; what you make is up to you. Let’s build a Zoo allows players to be as creative, or not, as they want. Design a layout that feels more like a theme park, or tourist trap if you want. Be the leading zoo breeder in the world if that’s more your thing. The vast array of in-game options allows the imagination to make your zoo whatever you want it to be. The game’s controls make it a little harder to bring your vision to life. Let’s Build a Zoo does a poor job of showing you all the possibilities, but if you can get through the semi-steep learning curve, it’s easy to zone out for hours building your zoo.