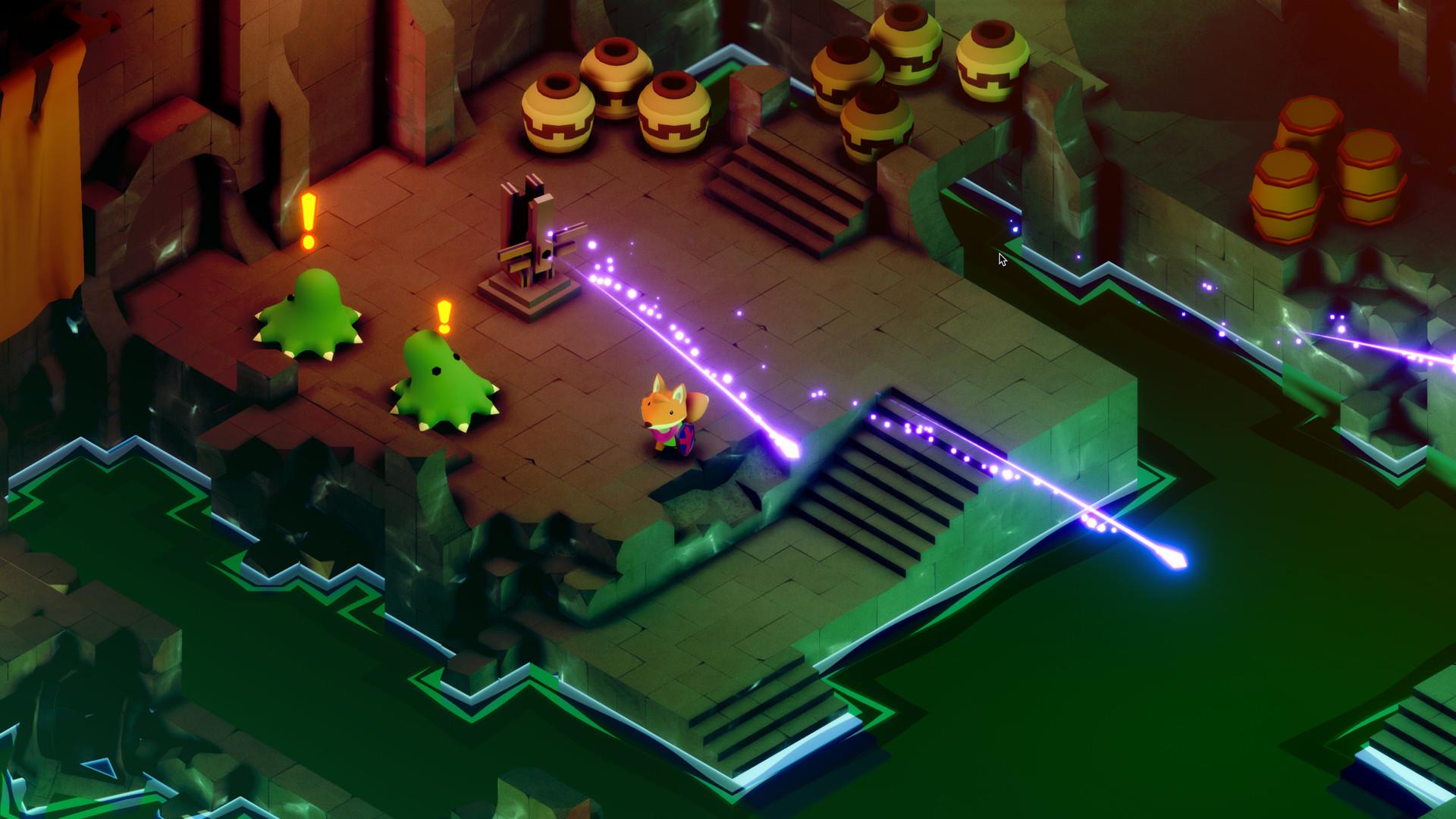 A resurgence of retro-inspired indie titles has been hitting the gaming industry lately and I’m all for it. What do you think of when you hear about an isometric role playing game starring a character wearing a green tunic and holding a trusty sword and shield? Most people would probably think of Link from The Legend of Zelda, but I’m actually referring to the charming little fox from an indie marvel known as Tunic. Developed by only one person, Tunic is a Souls-like action game that wears its Zelda inspirations proudly on its sleeves. Step into the boots of a cute little fox and embark on a grand adventure to discover the secrets of a lost land by solving puzzles and fighting monsters. The game came out earlier this year to high praise on PC and Xbox consoles. Now it’s making its way onto Nintendo Switch and PlayStation, and I can happily say that it is well worth the wait. 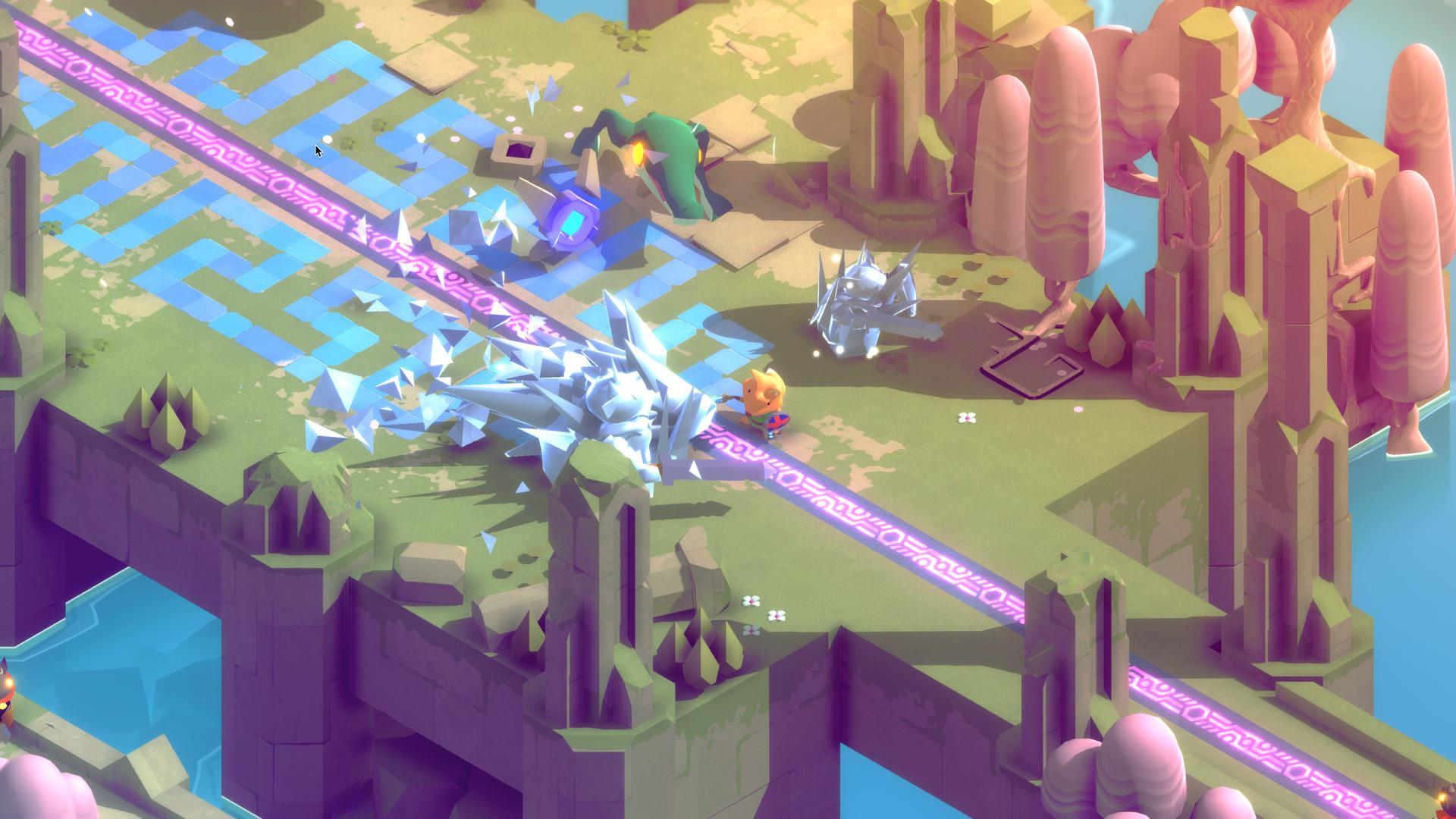 As I previously mentioned, you play as a nameless fox who wakes up on the shores of a mysterious island. Much of the game is vague, leaving you to figure out what to do and where to go. This undoubtedly adds to the overall allure of the in-game universe, but can also feel frustrating in the latter half of the game. Nonetheless, Tunic is a game that rewards your curiosity and desire to explore with some rare treasures or nudges in the right direction. Most of the narrative isn’t conveyed through dialogue, but through environmental clues and signs written in an ancient runic language. You’ll be asking yourself what these words say or symbols mean, and this ultimately serves as your motivation to push forward. It’s a simple set up from the developer that naturally creates mystique.

Don’t be fooled by the vibrant colors and adorable protagonist – Tunic features some surprisingly challenging combat that models itself after Dark Souls. All the staple concepts are here, including dropping your coins upon death, bonfire checkpoints, stamina-based combat, and level shortcuts. You start off with a measly wooden stick but soon find yourself well equipped with a variety of tools, ranging from a sword and shield to a magic staff and shotgun. It’s quite humorous seeing a chibi-looking fox blasting a shotgun, but who am I to laugh? There’s a great variety of enemy types, all visually distinct and requiring different approaches to defeat. The grand spectacles of any Souls-like game are of course the bosses, and Tunic doesn’t disappoint, featuring well-designed encounters that each provide a different challenge. The added cherry on top are the accessibility features that cater to those who want a more relaxing experience, such as the ability to remove the need for stamina management. That being said, the game does suffer a bit from tedious backtracking from dying. 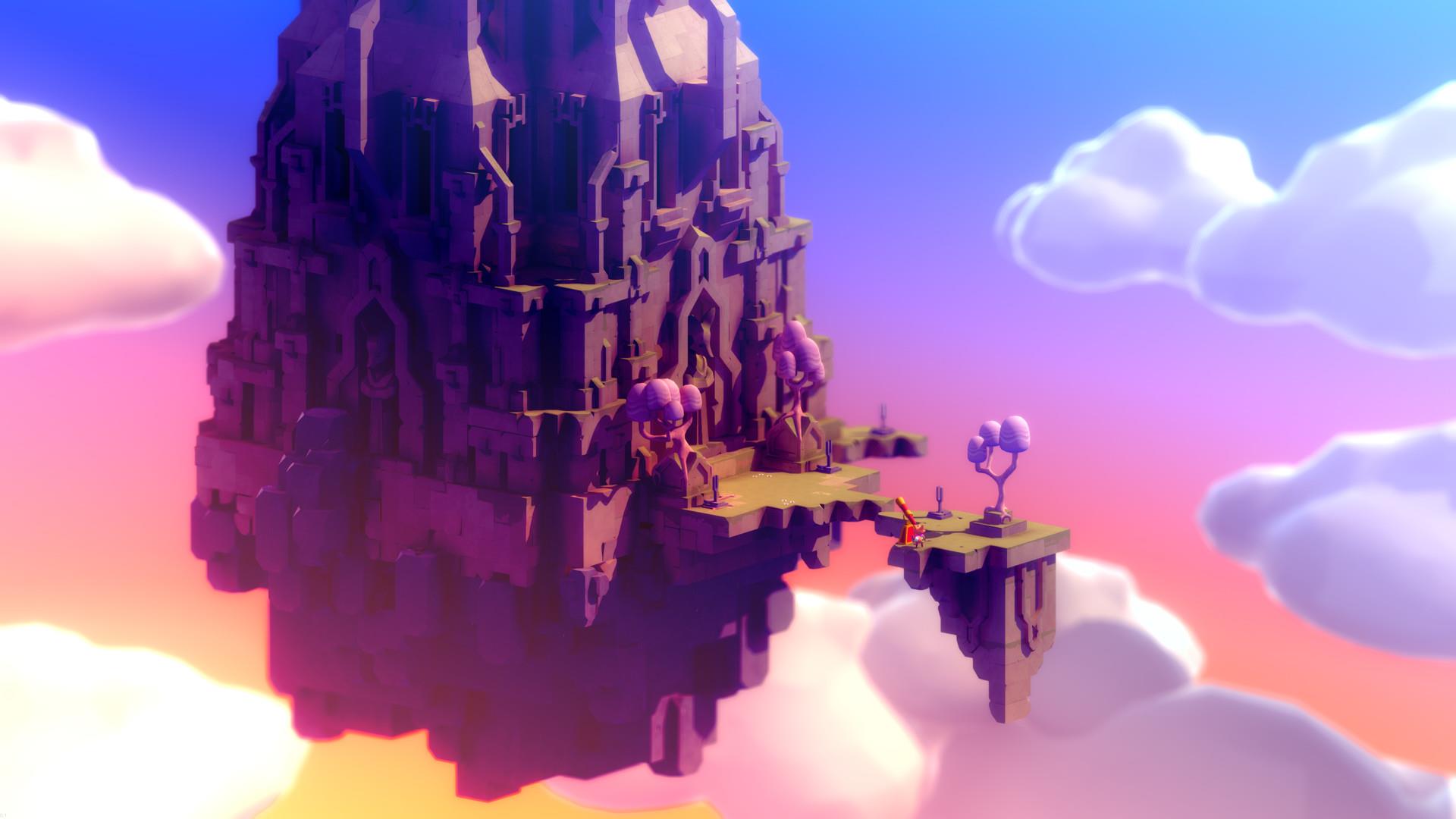 A great highlight of the game is the sheer number of secrets tucked away in all the corners of the world. Every nook and cranny seems to be filled with upgrade items or chests to be discovered. Passages can be hidden in plain sight, so don’t ever be discouraged from treading the same path again for something you might have missed. The game also takes inspiration from Metroidvanias by preventing you from reaching a certain area until you acquire the appropriate tools to do so. The grappling hook, in particular, makes combat much more satisfying and visceral as it allows you to pull enemies close for a quick combo. Progression is meaningful and fairly straightforward, with the ability to upgrade your attack, defense, health, stamina. The breathtaking isometric angles and environments bathed in warm colors welcome you to explore and get lost. Tunic offers such an upbeat aesthetic compared to the stereotypical dark and dreary tones we normally see in a Souls-like game. The soundtrack also excellently complements the optimistic visuals by providing ambient melodies and calming tunes. The synthy jingles evoke an almost zen-like state as your little fox slashes up baddies and rings bells.

Tunic isn’t a terribly long game but has just enough content to satisfy without overstaying its welcome. One playthrough will take you around 12 hours, even more if you plan to 100% the game and find all the collectibles and whatnot. There are two different endings to achieve, with a new game plus mode included as well, so there’s plenty of replayability here. 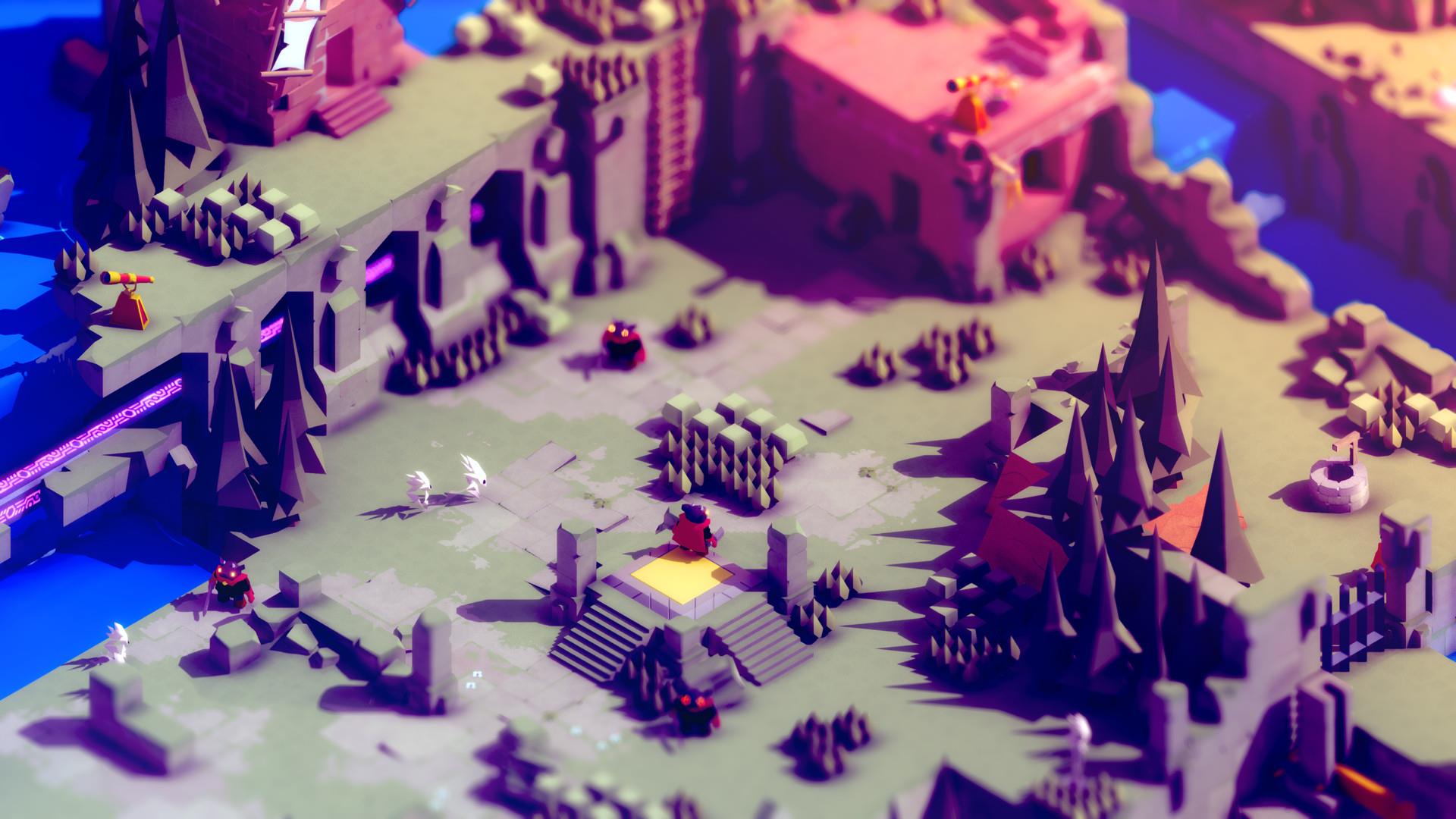 One of the only gripes I have with the game is the lack of guidance and direction. Tunic makes very little effort to explain its systems, and as a result, may prove to be very frustrating. Your general goal in the game is to restore and uncover lost pages of a manual that you collect throughout. Many of the texts presented are written in the aforementioned runic language that you must piece together and interpret. Each page of this booklet contains maps, instructions, and tips, but most are masked with cryptic scribbles. This ambiguity also transfers over to many of the puzzles that can block your progression if you can’t solve them. This amount of freedom and obscurity is appreciated, and clearly pays homage to old school classics, but I do wish there were an option to toggle for more hints if needed. This is somewhat mitigated on the PlayStation 5 version which contains  a Game Help feature. This feature assists you when it comes to tracking collectibles or progress in certain parts of the story. Patience and attention to detail are required for someone to fully enjoy all this game has to offer, or you can just look up a guide online too.

Tunic wonderfully captures the glamor, charm, and mystery of old school Zelda classics, smoothly combined with challenging combat formulated by FromSoftware. It’s simply mind blowing to think that this entire project was created by one individual, especially with how polished and fleshed out the game is. It can get a little too obtuse, but if you have the patience, there’s a world of secrets for your little fox to discover.

The fact that this charming game was created by a single person is astounding. Tunic delightfully combines what we loved about games from our childhood with modern day influences. With tons of challenging enemies to encounter, cryptic puzzles to solve, and secrets to uncover, this game will ensure you won't regret embarking on the adventure of this cute little fox. There’s simply no better way to play this game than on the PlayStation 5, with the intuitive Game Help feature and flawless performance.