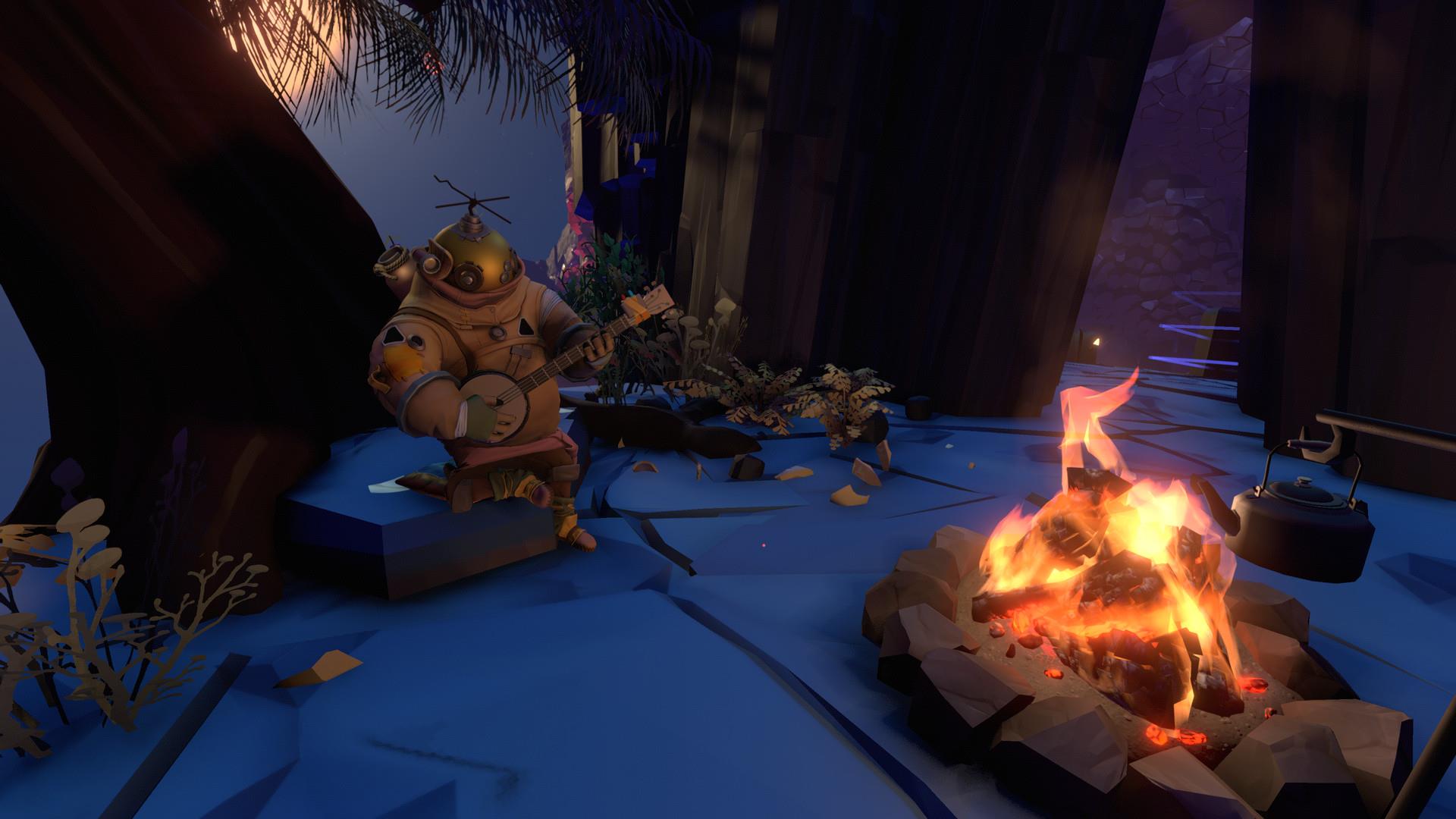 There are very few titles I wish I could play for the first time again, simply because the initial experience proved to be so unique and extraordinary. Mobius Digital’s Outer Wilds is one of these games, as it captures the very essence of discovery and rewards your inner curiosity. You play as an alien scavenger, waking up on an unknown planet, driven to figure out the secrets of a mysterious solar system that inexplicably explodes every 22 minutes. For better or for worse, Outer Wilds is an open world exploration game that immediately puts you into a Groundhog Day situation with zero guidance or instruction. Your innate desire to investigate and explore is the driving force of progression and now that the developers have released a free 4K60FPS patch for next generation consoles, there’s no better time to jump in your spaceship and fly across the final frontier. 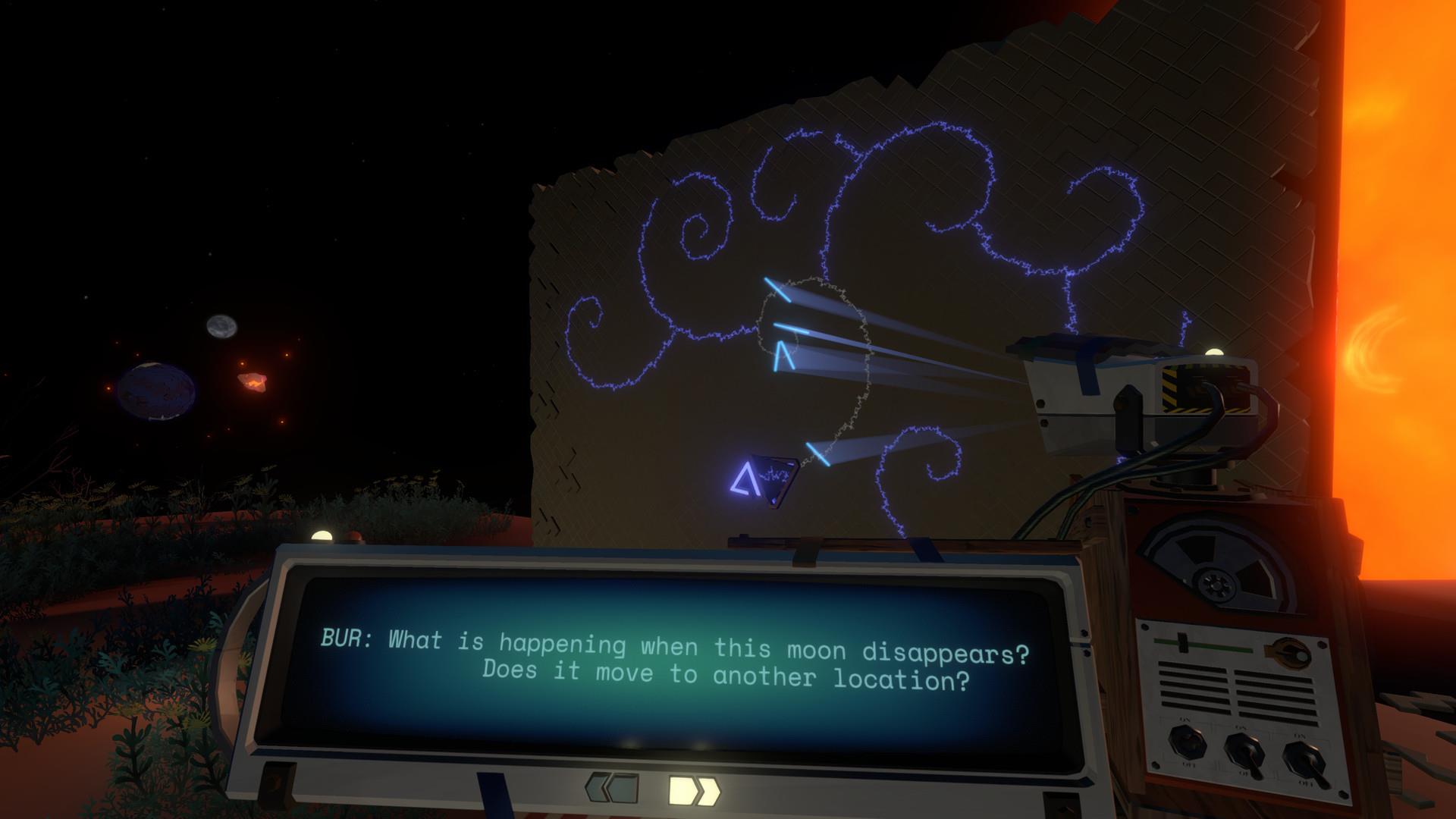 The first rule about Outer Wilds is you don’t talk about it, simply because of how easy it is to spoil. At its core, the game is a variation of a roguelike, where you die every 22 minutes and must start your adventure over again from scratch. The only thing you retain is the knowledge you gain from exploring and discovering secrets. There’s no combat or violence, but simply a doomed solar system bound to end. For some, the game might come off as an over-glorified walking simulator, and in many ways it is, but it’s really about connecting the dots and figuring out something much greater than yourself. It’s not a game for everyone, given how little hand holding it does, but for those willing to try out something different, I guarantee you are in for a remarkable experience.

You start off on a home base planet of sorts named Timber Hearth, where a village of aliens of your same race live. Talk to various inhabitants, cozy up against a campfire, or roast some marshmallows – the world is your oyster. When you’re ready to get to work, grab the launch codes to your spaceship and blast off into outer space. Outer Wilds presents a condensed galaxy of sorts where different planets orbit a common sun. Each planet is visually distinct, self-contained, and filled with puzzles to solve and secrets to discover. I won’t spoil the unique characteristics of each planet, but expect the unexpected when it comes to anything in this game. You won’t be able to fully explore all the planets before the world ends, so don’t worry about trying to do everything possible in one cycle. What’s most impressive about this universe is how dynamically reactive the environments are. Stay too long in one place and you just might find yourself in a pickle. 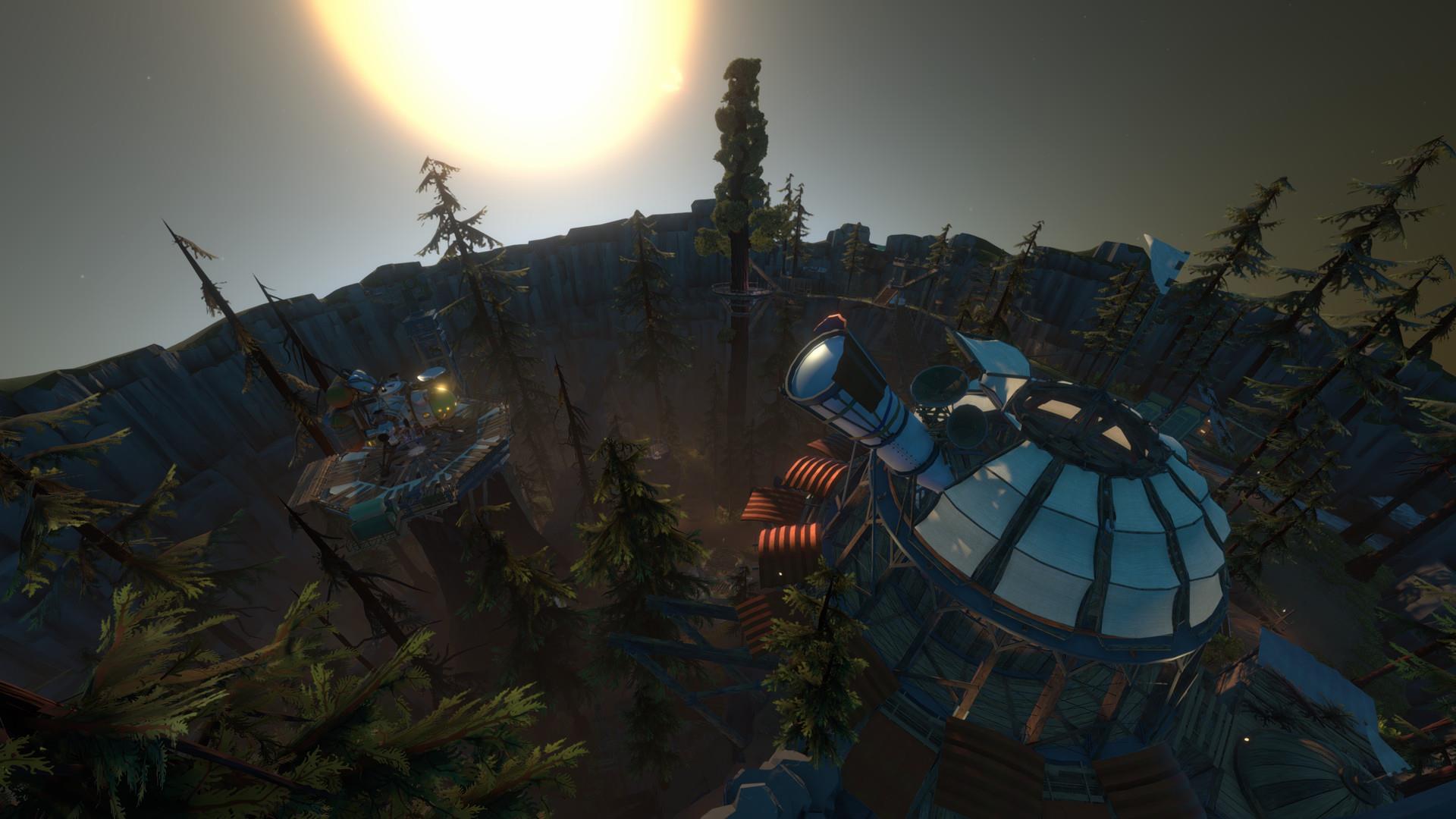 Just like the narrative and progression, the controls and mechanics of the game are minimally explained, if at all. Gameplay is presented in the first person point of view, even when navigating your spaceship. You come equipped with an arsenal of tools, including a scanner that can pick up audio signals from afar and a scout drone that you can launch to explore unknown areas and take pictures. You might not know what these tools are used for, but that’s part of the game’s mysterious allure. Most of the controls come quite intuitively, other than navigating your spaceship and suit. I understand that the developers were probably trying to accurately convey  what it’s like to traverse through outer space, but controlling and landing the ship and suit is finicky and clunky. The physics feel natural albeit unintuitive.

As I mentioned above, there’s not much I can reveal about the narrative without spoiling it for you. What I can tell you is that it’s a compelling narrative driven by curiosity and wonder and revolves around an ancient alien race known as the Nomai, who studied the solar system extensively before disappearing. Mobius Digital brilliantly uses the puzzles and environments to drive the story forward. Everything is handcrafted and there for a reason. It’s amazing that Outer Wilds started out as a Masters thesis project. There were many times that impressively minute details caught me by surprise, such as an orbiting meteor thawing as it gets closer to the sun. The various characters you meet along the way make your journey feel a tad less lonely. Learning about their thoughts and motivations creates a more human feel and ultimately allows the narrative to feel more engaging. 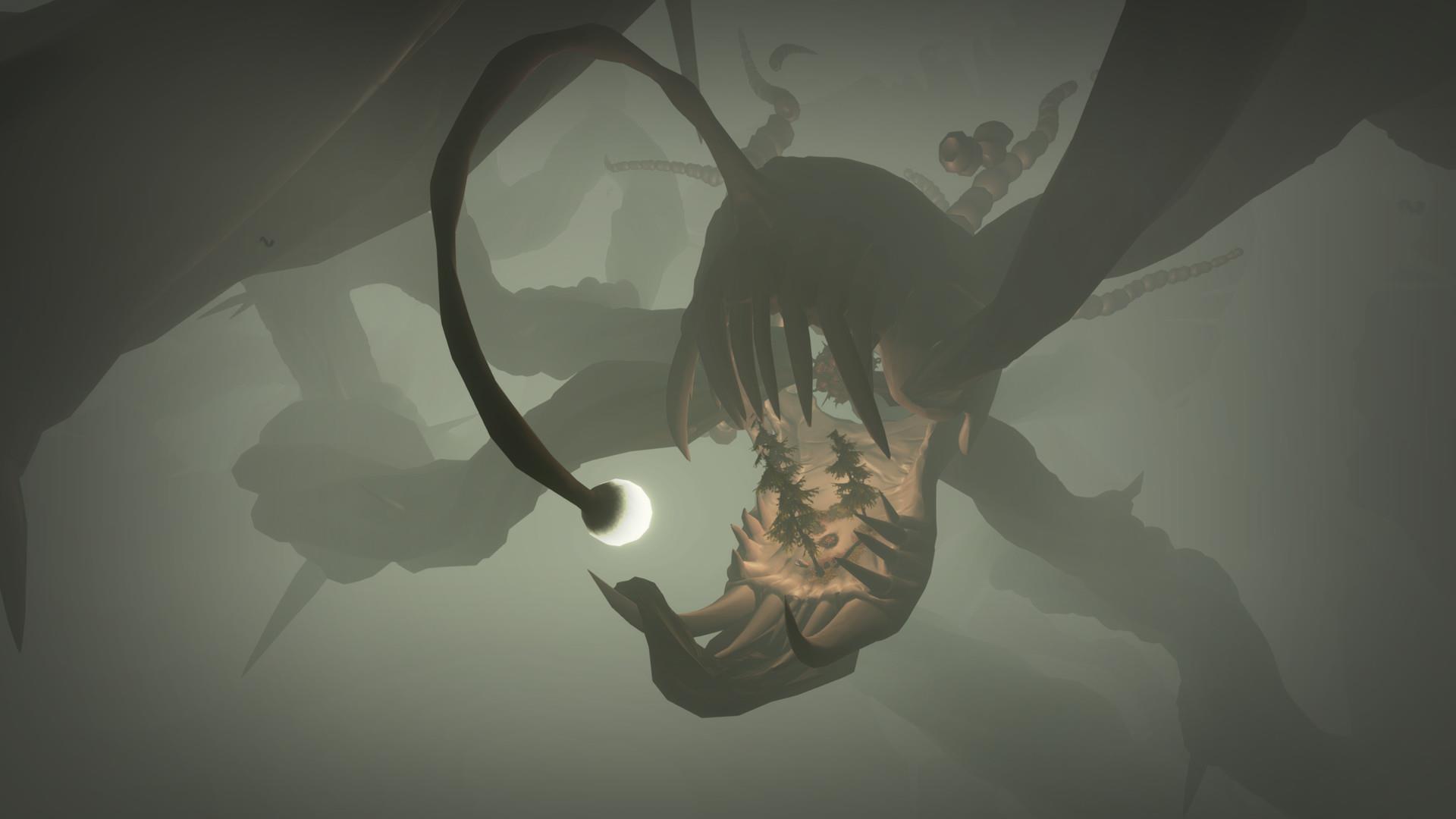 Performance on the PlayStation 5 with the free next generation console patch is flawless, with crisp graphics and silky smooth frame rates. There’s simply no better way to play this game at this point. The art direction, soundtrack, and overall attention to detail are the cherries on top of this incredible game. From the visually distinct color palettes of the various planets and the incredible music that evokes emotions to the ever changing dynamic environments, Outer Wilds truly encapsulates what it feels like to explore outer space. The only bummer is that the game is not voice acted and all dialogue is presented as blocks of text.

That being said, I don’t think this game is for everyone. The lack of direction this game provides may be off putting to many considering most games in today’s gaming industry are filled with tutorials and linearity. Prepare to feel stuck and unable to move forward at many points during the game. Many obscure puzzles that require trial and error can be frustrating given the time limit imposed in each playthrough. It’s a slow paced and somewhat cozy game that isn’t filled with lots of action, so prolonged play periods may burn a lot of people out. Know exactly what you are getting yourself into before diving into this game and you won’t turn out disappointed. 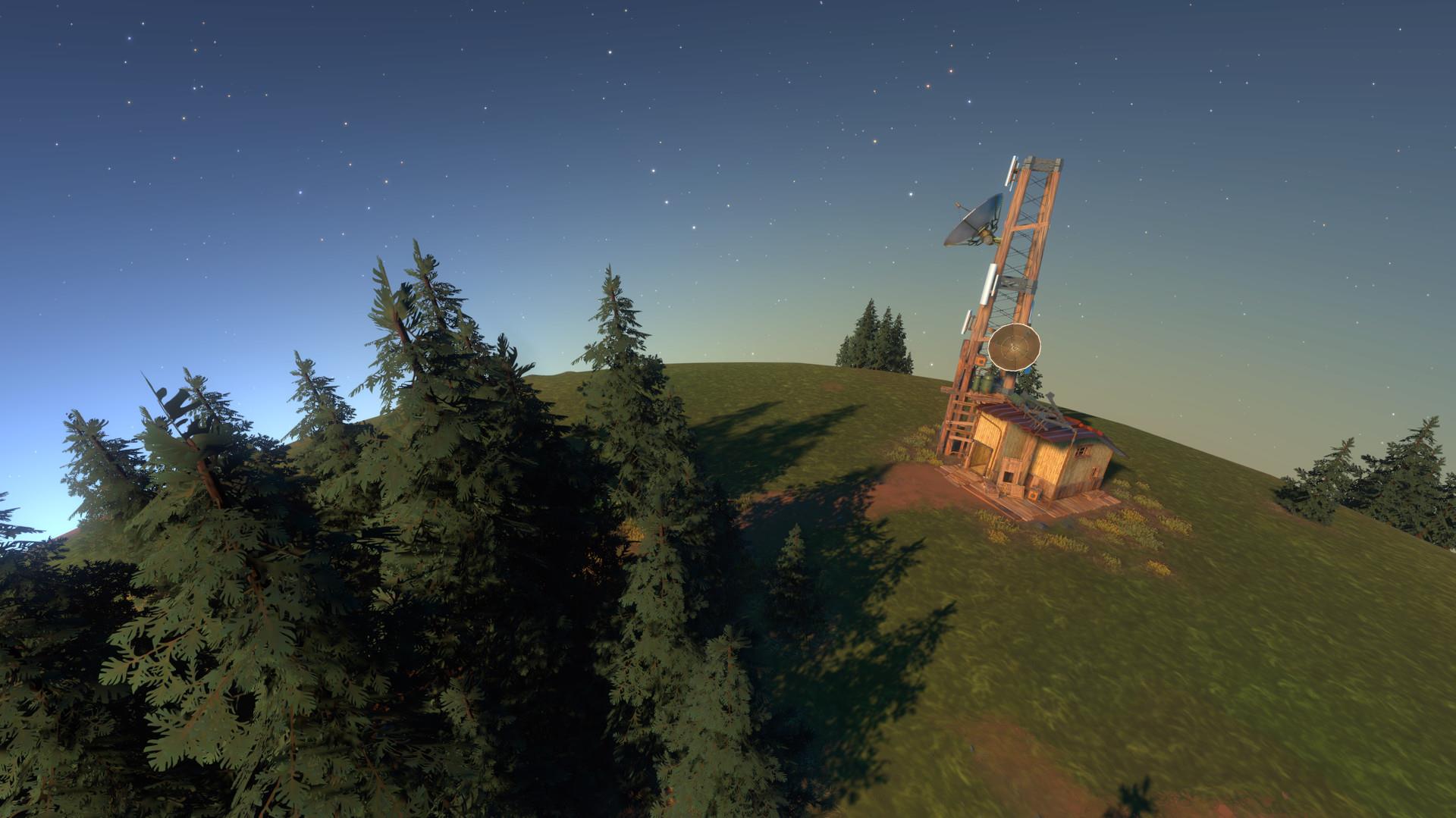 The Archaeologist Edition of the game also includes the Echoes of the Eye expansion, which introduces an expansive new area to explore that contains just as many secrets as the base game does. It takes place on a derelict spacecraft called The Stranger, which also suffers from the same 22 minute doomsday clock, and has been orbiting the same solar system all this time through a cloaking mechanism. This expansion doesn’t require you to finish the original narrative but instead encourages you to tackle both concurrently. Echoes of the Eye introduces many more horror elements and brings more interesting puzzles and secrets that ultimately contribute to the overall lore of the universe Mobius Digital built. Those who enjoy the gameplay loop of Outer Wilds will be delighted with this meaty DLC.

Mobius Digital has created an experience that is unlike any other title in the gaming industry. Outer Wilds not only manages to present a gripping narrative that is reminiscent of humanity itself, but does so in a way that fantastically fuses exploration, mystery, and puzzle-solving.

If there’s one game that I would go back and play over again as if it were the first time, it would be Outer Wilds. It’s a fantastic space exploration experience that rewards your curiosity to explore and desire for knowledge. The Echoes of the Eye expansion further enhances your journey by introducing horror twists to the classic formula. Now that Mobius Digital has released a 4K60FPS patch on next-gen consoles, there’s no reason not to blast off on your spaceship and start your adventure.